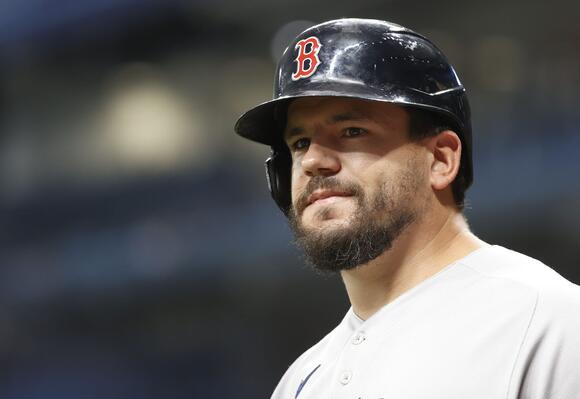 Most notable in the lineup Cora is sending out against Yankees starter Gerrit Cole is the presence of Kyle Schwarber in the leadoff spot, while serving as Martinez's replacement in the designated hitter position.

Schwarber had led off 27 times this season (the majority of appearances coming with the Nationals), hitting .292 with a 1.216 OPS and 17 home runs.

Also of note is Bobby Dalbec getting the start at first base against the righty. Dalbec is 0-for4 with two strikeouts vs. Cole.

Here is the Red Sox' lineup with Nathan Eovaldi on the mound:

One of MLB’s fastest players — if not the fastest — is coming to Boston. The Red Sox announced Friday afternoon that they had claimed speedster outfielder Tim Locastro off waivers from the New York Yankees. Locastro, a 29-year-old who has played with Los Angeles Dodgers, Arizona Diamondbacks, and Yankees,...
MLB・24 DAYS AGO
Tv20detroit.com

A former Boston Red Sox player who helped the team win a World Series title in 2007 has died. According to ESPN Deportes and Dominican newspaper Diario Libre, former shortstop Julio Lugo died of an apparent heart attack on Monday. Lugo's sister, Rina Lugo, told the sports outlet that her...
MLB・14 DAYS AGO
FanSided

The New York Mets are skimming the free-agent pool, and one name that could make sense would be Steven Matz. Ironically, the 30-year-old pitcher is the same guy the Mets traded to the Toronto Blue Jays last winter. A reunion between the Mets and Matz would make sense considering the...
MLB・10 DAYS AGO

The Boston Red Sox lost a key member of their rotation earlier this offseason, as Eduardo Rodriguez agreed to a five-year deal worth $77 million with the Detroit Tigers. On Friday, the front office found a free agent who can potentially take Rodriguez’s spot in the rotation. According to ESPN...
MLB・3 DAYS AGO
Yardbarker

The 2021 MLB offseason is in full swing, and dominoes are already starting to fall. One of the biggest storylines this winter revolves around the stacked group of free-agent shortstops. Some superstars at that position could find themselves playing for new teams in 2022, and Javier Baez is one guy...
MLB・13 DAYS AGO
NBC Sports

The courtship of Kyle Schwarber continues in earnest. Schwarber recently declined his mutual option with the Boston Red Sox to become an unrestricted free agent, and several teams reportedly are interested in the veteran slugger. That includes the Red Sox, who remain "engaged" with Schwarber in contract discussions, per Chief Baseball Officer Chaim Bloom.
MLB・11 DAYS AGO
MLB Trade Rumors

The Red Sox are finalizing a one-year contract with Michael Wacha, reports Jeff Passan of ESPN (Twitter link). The deal is pending a physical. Wacha is represented by CAA Sports. Wacha spent the 2021 campaign with the division-rival Rays. Working primarily as a starter, he tossed 124 2/3 innings over...
MLB・3 DAYS AGO

The Boston Red Sox would love to have Kyle Schwarber in 2022 and beyond. So too would a bunch of other teams. That’s hardly a surprise, especially with the veteran outfielder putting together a monster 2021 campaign with the Red Sox and Washington Nationals. He became a key part of Boston’s operation after arriving at the trade deadline this past season, but now he hits free agency, where he should get a ton of interest.
MLB・14 DAYS AGO
New York Post

The first major signing of this MLB free agency period has resulted in the Red Sox losing a key piece of their rotation. Eduardo Rodriguez is joining the Tigers on a five-year, $77 million contract plus bonuses, The Post’s Joel Sherman confirmed. The 28-year-old left-hander, who spent the last seven years in Boston, had rejected the Red Sox’s $18.4 million qualifying offer.
NFL・14 DAYS AGO
NESN

Projecting 2022 Red Sox Rotation: No Shortage Of Options For Boston

The range of outcomes for the Boston Red Sox rotation in 2022 feels like it could be pretty extreme. There’s certainly a world in which Boston’s proven, veteran starters mesh well with the younger arms looking to take the next step and the Sox remain in contention behind one of the best rotations in baseball. But calamity also seems like it’s on the table, as those veteran starters also have injury and durability concerns, while we’ve yet to see the young guns do it consistently for a full season. Or, in the case of some, we haven’t seen it in a big league rotation at all.
MLB・14 DAYS AGO
audacy.com

What a difference a year makes. Last December, Kyle Schwarber was non-tendered by the Chicago Cubs after posting a .701 OPS in the pandemic-shortened season. But after an All-Star season that he split between the Washington Nationals and Boston Red Sox, Schwarber is one of this offseason's most intriguing free agents.
NFL・14 DAYS AGO

After Eduardo Rodriguez, what happens to the Boston Red Sox rotation?

While things at the major-league level have not really gotten going as of yet for the hot stove, it was a big weekend down in the desert for the Arizona Fall League, which held its All-Star festivities. Triston Casas was among the game’s top performers. (Sam Dykstra; MLB.com) Later in...
MLB・14 DAYS AGO
NECN

How Will the Red Sox Fill E-Rod's Void in Starting Rotation?

Tomase: How will Red Sox fill E-Rod's void in starting rotation? originally appeared on NBC Sports Boston. Left-hander Eduardo Rodriguez's reported decision to join the Detroit Tigers may only elicit shrugs from Red Sox fans who grew tired of his inconsistency, but it's a legitimate loss that highlights the challenges facing Chaim Bloom as he attempts to upgrade his rotation.
MLB・14 DAYS AGO
985thesportshub.com

The Red Sox have a hole to fill in their starting rotation. Eduardo Rodriguez is off to a new team after six seasons in Boston, agreeing to a five-year deal with the Detroit Tigers. Cody Stavenhagen of The Athletic was first to report the news. Soon after that, Jeff Passan...
MLB・14 DAYS AGO
philliesnation.com

Kevin Long on Kyle Schwarber: ‘I do think that he would fit the Phillies’

Since you’re asking, yes, new Philadelphia Phillies hitting coach Kevin Long does appear to be keen on the idea of reuniting with one of his most successful pupils. After being non-tendered by the Chicago Cubs last offseason, Kyle Schwarber revived his career in 2021 thanks in large part to the tutelage of Long, then the Washington Nationals hitting coach. Schwarber homered 16 times and posted a 1.122 OPS in the month of June for the Nats, earning him his first trip to the All-Star Game and ultimately making him a major midseason addition for the Boston Red Sox as they attempted to make a deep postseason run.
MLB・11 DAYS AGO
Boston Herald

If Eduardo Rodriguez returns to the Red Sox, it’ll be on a multi-year deal. Rodriguez rejected the Sox’ one-year qualifying offer worth $18.4 million, according to MLB Network’s Jon Heyman, who reported the news late Sunday night while saying Rodriguez informed them of the decision last week during the general managers’ meetings.
MLB・14 DAYS AGO
theScore

The Boston Red Sox are exploring the idea of signing free-agent infielder Javier Baez, according to MLB Network's Jon Heyman. Baez is one of several premier shortstops available in free agency. However, the two-time All-Star can also play second base - a position he manned in August and September after joining the New York Mets following a trade deadline deal with the Chicago Cubs.
MLB・13 DAYS AGO