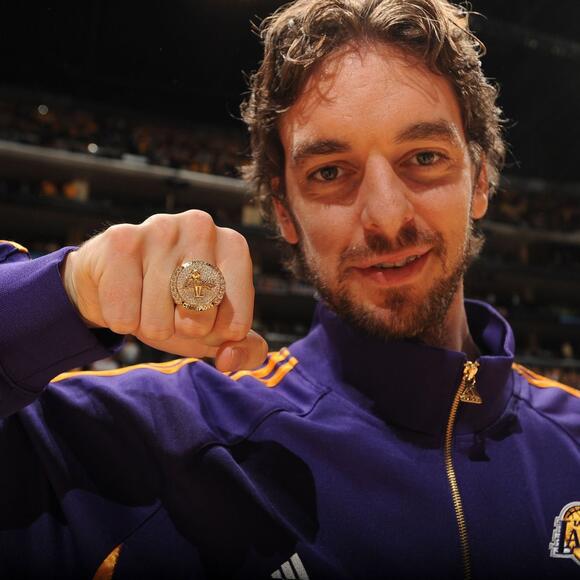 Gasol spent seven seasons with the Lakers, including two where he helped lead them to NBA Championships. He could have arguably received the NBA Finals MVP award in 2010, as he played extremely well, averaging 18.6 points, 11.6 rebounds, and 3.7 assists.

Last week we discussed whether Gasol's jersey should officially be hung in the rafters at Staples Center. The overall consensus was that Gasol's number should be retired. Gasol helped Kobe Bryant and company get over the hump and win two finals while playing elite-level basketball. Resoundingly, Gasol should have his number retired. The Lakers, clearly recognizing Gasol's contribution to the Lakers, agreed. They made the official announcement minutes later.

Laker fans will always remember his resiliency, his ability to pass the ball, and his attitude. Gasol is a Laker for life.

I LIKE IT!! ENJOYED WATCHING HIM PLAY “TEAM” Basketball, when the game was NOT politicized, and it wasn’t about “ ME, ME, ME !” Stopped watching 2 years ago! Want to venture a GUESS as to WHY?!

Kyle Kuzma happy to be off Lakers for one big reason

Kyle Kuzma is now casting spells as a Washington Wizard, and he is happy about the change of scenery for at least one big reason. The former Los Angeles Lakers forward Kuzma spoke this week on ESPN’s “NBA Today.” During the interview, Kuzma described what he likes about his new role in Washington this season.
NBA・9 DAYS AGO
Yardbarker

Lakers have complaint to league about Anthony Davis

Now just .500 on the year, the Los Angeles Lakers are going to the league office with a gripe that they have. After the Lakers lost to the Milwaukee Bucks on Wednesday, coach Frank Vogel said that the team has been in contact with the league about the lack of free throws for Anthony Davis. The eight-time All-Star failed to get to the line a single time against Milwaukee.
NBA・9 DAYS AGO
ClutchPoints

The Los Angeles Lakers are in the midst of a roller-coaster campaign that, for the most part, has not lived up to the expectations. Los Angeles is 7-6 on the season and has been incredibly disappointing so far, especially for Lakers fans. Every loss in La La Land is magnified. But their ugly 107-83 defeat to the Minnesota Timberwolves at home on Friday night deservingly warranted the negative headlines and the boos from the Staples Center crowd.
NBA・13 DAYS AGO
USA TODAY Sports Media Group

With the Los Angeles Lakers six games through the 2021-22 NBA season, things haven’t entirely been smooth out of the gate. The Lakers added 11 new players over the summer to the guaranteed roster, so every player is still acclimating to different styles of play and developing chemistry. But some...
NBA・27 DAYS AGO

Los Angeles Lakers superstar LeBron James is never one to shy away from political events. The four-time NBA champ recently weighed in on the Kyle Rittenouse trial as LeBron mocked the 18-year-old for fake crying as he took the witness stand on Wednesday. The Lakers star’s accusation quickly went viral...
NBA・14 DAYS AGO
ClutchPoints

A lot of people from in and around the NBA have chimed in on the incident involving Los Angeles Lakers superstar LeBron James and Isaiah Stewart of the Detroit Pistons. LeBron got ejected for just the second time in his career for a supposed inadvertent blow to Stewart’s head that left the youngster’s face all covered in blood.
NBA・2 DAYS AGO
Lakers Daily

During the Los Angeles Lakers’ Wednesday win over the Indiana Pacers, LeBron James asked to have two fans sitting courtside at Gainbridge Fieldhouse escorted out. Turns out the fans were taunting James in a malevolent way. The four-time MVP may be one of the world’s most popular athletes, but he...
NBA・1 DAY AGO
Sportsnaut

Lakers forward LeBron James will miss his eighth straight game on Wednesday, according to the team. Los Angeles officially listed the 17-time All-Star as “Out” for the team’s midweek matchup against the Milwaukee Bucks. ESPN‘s Dave McMenamin broke the news via Twitter. LeBron James is officially listed as out for...
NBA・10 DAYS AGO
AllLakers

Lakers: Could LeBron James Be Suspended?

They say a picture is worth a thousand words. If you know anything about the NBA's long history, this image of a griping LeBron James tells you all you need to know about why the NBA would technically be totally justified in suspending him. Here he is stepping out onto...
NBA・10 DAYS AGO
AllLakers

During the beginning of the third quarter, LeBron James and Isaiah Thomas got tangled up during a boxout. James threw an in adverted elbow to get away from Stewart, but it landed squarely around Stewart's eye. As blood was streaming down Stewart's face he had to be separated multiple times to avoid starting a fight with the Lakers. James was ejected after a flagrant-2 foul, and Stewart obviously was sent to the locker room too.
NBA・5 DAYS AGO
ClutchPoints

It’s now been nearly a week since Detroit Pistons big man Isaiah Stewart was involved in an ugly incident with LeBron James and the Los Angeles Lakers. Stewart has now served his two-game suspension for his antics during what nearly turned out to be a brawl between the two teams and at this point, it sounds like the 20-year-old has already had ample time to think about his actions.
NBA・11 HOURS AGO

LeBron James put up a few shots on Wednesday prior to the Los Angeles Lakers’ high-profile matchup against Giannis Antetokounmpo and the defending champions Milwaukee Bucks. By the way Lebron was moving around in his pre-game workout, it actually looked like he was going to suit up for LA to face the Bucks. James still […] The post Lakers news: LeBron James’ workout video looks promising for imminent return appeared first on ClutchPoints.
NBA・9 DAYS AGO
fadeawayworld.net

Pau Gasol and Kobe Bryant could be considered the most underrated duo in NBA history. While they only played with each other for a few seasons, what they accomplished together in that time was truly spectacular, and will stand the test of time in Lakers' history. Gasol joined the Los...
NBA・4 DAYS AGO
USA TODAY

All it took was one blow to the face to dampen the luster of a game between two teams that had sky-high expectations but have plummeted back to Earth.
NBA・2 DAYS AGO
Lakers Daily

Last year, former Los Angeles Lakers big man Pau Gasol and his wife welcomed their first child into the world. In honor of the late Kobe Bryant and his daughter Gianna, Gasol and his wife decided to name their baby Elisabet Gianna Gasol. They also made Vanessa Bryant the godmother of the child.
NBA・17 HOURS AGO
lakersnation.com

Los Angeles Lakers legend Pau Gasol decided to end his playing career back in October and during the process of coming to that decision while also playing for FC Barcelona for a second stint, the two-time NBA champion documented his journey in a four-part docuseries called Pau Gasol: It’s About the Journey.
NBA・14 DAYS AGO
AllLakers

One of the bright spots so far this season has been the play of Kyle Kuzma. Through 11 games for the Wizards, Kuzma is averaging 14.8 points and 9.1 rebounds on a robust 39% from the perimeter. Lakers fans should not be surprised as he did average 18.7 points and 5.5 rebounds in the 2018-19 season, the season prior to Anthony Davis joining the Lakers.
NBA・13 DAYS AGO
AllLakers

Lakers: The Team Mindset Shifted This Week, And it Has Shown in the Wins

It wasn't always pretty, but the Lakers pulled out a big win over the Heat on Wednesday night. Facing one of the best teams in the East without a lot of their key guys, Los Angeles came out and beat Miami in overtime for their second-consecutive win. Missing Austin Reaves...
NBA・15 DAYS AGO
AllLakers

The Lakers' tough-out win versus the Miami Heat on Wednesday night was not pretty, but it was a win. The Heat lost Jimmy Butler early in the game due to an ankle sprain, so the Lakers were able to take advantage of that to win the game. Westbrook had arguably...
NBA・15 DAYS AGO