The 20th Century Studios film stars Keira Knightley as a journalist who investigated the serial killer.

A new movie about the Boston Strangler is set to begin filming in the area later this year, adding another chapter to the Boston crime movie canon.

20th Century Studios will begin filming “Boston Strangler” in the Boston area in December, with scenes to be shot both in Boston proper and nearby towns, according to a source familiar with the production. 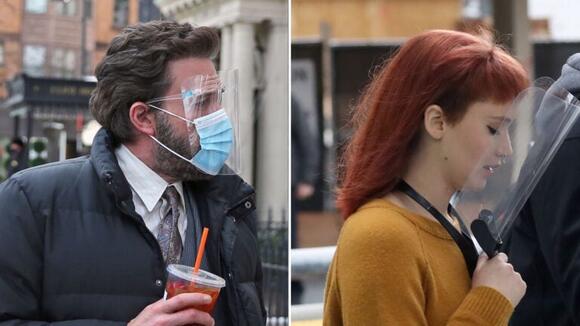 “Boston Strangler” will tell the story of Loretta McLaughlin, a reporter who first connected the dots between a series of murders in Boston in the 1960s while working at the Boston Record American, according to the source.

McLaughlin, who later became the editorial page editor at The Boston Globe, wrote a four-part series about the murders along with fellow Record American reporter Jean Cole that first gave the killer the “Boston Strangler” moniker.

Cole and McLaughlin’s reporting helped to generate public interest in the murders, previously thought to be unrelated. In 1967, Albert DeSalvo was sentenced to life in prison for the murders of 13 women in the Boston area from 1962 to 1964.

Keira Knightley (“Pirates of the Caribbean”) will play McLaughlin, while Matt Ruskin (“Crown Heights”) will direct.

Using the Record American reporters as the main characters of “Boston Strangler” is reminiscent of “Zodiac,” the 2007 David Fincher movie that followed the journey of two San Francisco Chronicle reporters (Robert Downey Jr., Jake Gyllenhaal) as they attempted to identify the “Zodiac Killer” terrorizing the Bay Area in the 1960s.

“Boston Strangler” will become at least the fourth movie about the infamous murders. The most notable of them, released in 1968, starred Tony Curtis (“Some Like It Hot”) as DeSalvo, and also featured Henry Fonda (“On Golden Pond”) and George Kennedy (“Cool Hand Luke”).

“Boston Strangler” will likely begin filming during a relatively quiet time in the local film industry after one of the busiest periods in recent memory. Films currently in production that will have wrapped up or be close to finishing when “Strangler” begins shooting include “Spirited,” a movie musical starring Ryan Reynolds, Will Ferrell, and Octavia Spencer; “Salem’s Lot,” an adaptation of the Stephen King novel starring Alfre Woodard (“12 Years A Slave”), Bill Camp (“Joker”), Spencer Treat Clark (“Animal Kingdom”), and Pilou Asbæk (“Game of Thrones”); and “I Wanna Dance With Somebody,” a Whitney Houston biopic starring Naomi Ackie (“Star Wars”), Ashton Sanders (“Moonlight”), Clarke Peters (“The Wire”), and Stanley Tucci (“Spotlight”).

Watch: Helen Mirren Talks "Solos" & Getting Into TikTok. From Queen Elizabeth II to Catherine the Great, Helen Mirren has played many powerful historical women. So it only makes sense that the 76-year-old actress has been cast in the role of Israeli Prime Minister Golda Meir, the only woman to ever hold the office. The movie will follow Meir as she works with the all-male Cabinet during the Yom Kippur War of 1973.
WORLD・3 DAYS AGO
digitalspy.com

Bradley Cooper's new movie Licorice Pizza has landed an impressive 100% Fresh rating on Rotten Tomatoes. The latest film from Phantom Thread and There Will Be Blood director Paul Thomas Anderson is described as a coming-of-age comedy, with Alana Haim (of band Haim fame) and Cooper Hoffman (son of the late Philip Seymour Hoffman) playing the leads.
MOVIES・18 DAYS AGO
Popculture

Netflix is always adding new movies to its catalog, and one of the latest dramas to hit the streaming service is American Gangster, starring Denzel Washington and Russell Crowe. The crime drama was released in 2007 and was directed by legendary director Ridley Scott. Scott Is having a huge year in 2021 with the releases of The Last Duel and House of Gucci, so that could explain the film's rise in popularity on the Netflix charts. American Gangster is currently at #8 In Netflix's top 10 for movies, reminding people why Washington and Crowe are two of the greatest actors of their generation.
MOVIES・23 DAYS AGO
The Hollywood Reporter

Netflix is removing a number of films and TV shows from its streaming library this December. Movies leaving the platform this month include dramas The Theory of Everything and Lee Daniels’ The Butler, both of which will disappear in the middle of the month on Dec. 15. The 2014 biographical romantic drama Theory of Everything stars Eddie Redmayne as famed theoretical physicist Stephen Hawking opposite frequent collaborator Felicity Jones as his wife Jane. Based on her 2007 memoir Travelling to Infinity: My Life With Stephen, the film chronicles their relationship, his amyotrophic lateral sclerosis (ALS) diagnosis and his work in the field...
TV SHOWS・1 DAY AGO

Netflix’s Most Watched Movie Of All Time

(CNN) — Dwayne Johnson has reason to break out his Teremana and end 2021 with a toast. His latest movie, “Red Notice,” is now the most watched movie in Netflix history, according to the streaming giant. “Red Notice” brought in 328.8 million viewing hours, Netflix reports, topping the previous record...
MOVIES・4 DAYS AGO
Newsweek

Christmas Movie or Not? The 10 Most Controversial Festive Films

Some of the best non Christmas-y Christmas flicks to watch this Christmas.
MOVIES・13 DAYS AGO
Patriot Ledger

Want to be in 'Boston Strangler'? Extras needed for upcoming movie shoot

Filmmakers are seeking Caucasian men age 25 and older with short hair or willing to cut their hair to fill background roles for cops, detectives and inmates for “Boston Strangler.” “This is a period piece set in Boston from 1963 to 1965, so the look is very specific,” reads the casting notice. People can submit online applications here.
BOSTON, MA・12 DAYS AGO
IndieWire

The observation that men are the real monsters in Guillermo del Toro movies has become so vividly self-evident that it now offers all the same insight of noting that Quentin Tarantino loves feet, or that the old guy who popped up in the first two dozen MCU films had something to do with the comics that inspired them. “The Shape of Water” may have been a bold choice for Best Picture, but that Oscar-winning fable about a mute cleaning lady who falls in love with an imprisoned fishman stretched del Toro’s lifelong obsession with poignant genre stories to a fairy-tale ending....
MOVIES・2 DAYS AGO

Before Shirley Temple made a name for herself in films like Baby Take a Bow (1934) and The Little Colonel (1935), she was one of many pint-sized stars in 1931’s Baby Burlesks—a series of shorts in which young children parodied roles originally performed by the likes of Mae West and Marlene Dietrich. If a child misbehaved on set, they’d be sent to “the black box,” a frigid little sound booth kept cool with a block of ice (which was also the only place to sit).
MOVIES・3 DAYS AGO
Daily Independent

MAYSVILLE Jeff Castillo said his business is constantly evolving. Jeff and his wife, Tammy, own Hollywood Wardrobe Connection on East Second Street in Maysville. They sell recognizable clothing, shoes and items worn by lead actors, extras and musicians in movies, TV shows or in concert. “It started out in memorabilia,...
MAYSVILLE, KY・14 DAYS AGO
belmontonian.com

Hollywood is returning to Belmont. This time two locations in the Town of Homes will be in the spotlight as 20th Century Studios will spend a day filming its crime story about the Boston Strangler. “Back to Belmont after we had such a good experience on Defending Jacob, said Ryan...
BELMONT, MA・12 DAYS AGO
Variety

Paul Thomas Anderson’s “Licorice Pizza” has secured the best pandemic-era debut at the independent box office. With speciality offerings like “Licorice Pizza,” the key metric is per-theater-average rather than overall box office tally since its playing in very few locations. From only four theaters in the country — two in New York and two in Los Angeles — “Licorice Pizza” brought in $335,000 in total and $83,852 per location, more than any other specialty film in nearly two years. In other words, PTA has landed the best PTA among arthouse titles since the onset of COVID-19. In its first three days of release,...
MOVIES・6 DAYS AGO

MGM and Universal’s James Bond film “No Time to Die” has set a new high for Hollywood this year, passing the “Fast & Furious” film “F9” to become the highest grossing MPA release of the year and third highest among all global films. Since its release in the U.K. and...
MOVIES・14 DAYS AGO
Deadline

Oscar winner Halle Berry (Bruised, Monster’s Ball) has entered into a new partnership with Netflix which will see her continue to star in and produce films for the streamer. The announcement comes one week after Netflix’s global release of her feature directorial debut, Bruised, which quickly landed the streamer’s #1 film of the week slot in the U.S., and has charted at #2 on its Top 10 Global English Film List. Bruised hit #1 in a total of 21 countries, and was watched for 47.7M hours in its first five days. In the film penned by first-time feature writer Michelle Rosenfarb, Berry...
MOVIES・4 DAYS AGO
iheart.com

Film On "Boston Strangler" Looking For Extras In Greater Boston

BOSTON (WBZ NewsRadio) — An upcoming film on the 1960's Boston serial killer, the "Boston Strangler," is looking for extras. The film, which stars Kiera Knightley (best known from her role in the Pirates of the Caribbean series) as Loretta McLaughlin, an enterprising reporter that worked with her fellow journalist Jean Cole to piece together the truth about a string of murders in the 1960's.
BOSTON, MA・11 DAYS AGO
film-book.com

Thanksgiving movie quizzes? They’ve been done to death. Instead, let’s talk turkey. Specifically, turkey and all the other fixings that make up the traditional (at least the Anglo-American traditions surrounding the day, that is) holiday meal. Each movie mentioned below won’t necessarily be Thanksgiving-related, but the titles will all include...
MOVIES・8 DAYS AGO
TVOvermind

10 Movies That Deserve a Spot in the National Film Registry

Every December, the United States Library of Congress selects 25 English-language films to be preserved in the National Film Registry. The film registry is tasked with preserving the original, final cut of an influential film with the criteria for selection of a film being it’s “historical, cultural, and aesthetic significance. Since the National Film Preservation Act of 1988 passed in Congress, which brought about the registry, 800 films have been selected for perpetual preservation within the library. A film must be at least 10 years of age to qualify for selection, and must have some kind of influential quality in both popularity or scholarly assessment pertaining to the above criteria. Since only 25 films are selected each year, this means that there are many classic films that have yet to be selected for preservation. Here are some notable omissions. You can see a full list of overlooked film titles yet to be selected here.
MOVIES・5 DAYS AGO
The Hollywood Reporter

No Time to Die star Ana de Armas is in and Scarlett Johansson is out in Apple Original Films’ adventure pic Ghosted, to be directed by Dexter Fletcher and produced by Skydance Media. De Armas will now star opposite Chris Evans in the romantic action-adventure film and executive produce; Evans produces alongside David Ellison, Dana Goldberg, Don Granger and Jules Daly. Evans and Johansson, known for playing Captain America and Black Widow, respectively, in the Marvel Cinematic Universe, had originally teamed up for Ghosted. The deal for the Apple film was the second Johansson signed after filing her lawsuit against Disney over...
MOVIES・1 DAY AGO
USA TODAY Sports Media Group

You have a big month in front of you. Maybe you have travel plans or gifts to buy. But you also have movies you need to catch in theaters. If you’re trying to plan out which movies should be at the top of your list for theater outings in December, we’ve got you covered, because there’s a ton of great stuff on the way.
MOVIES・4 DAYS AGO