Cordarrelle Patterson is a throwback player, he does everything, Matt Ryan says 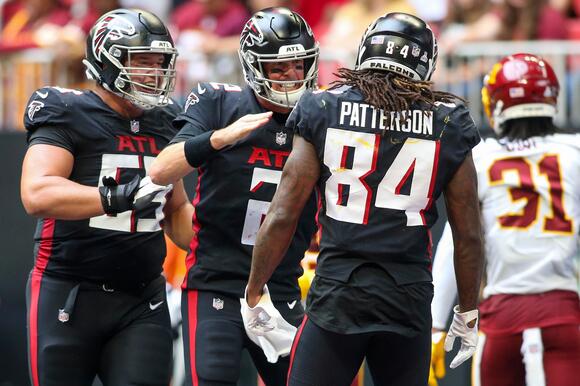 Atlanta Falcons quarterback Matt Ryan joined Dave Archer in the player guest portion of the show and talked about the impact wide receiver/running back/special teams star, Cordarrelle Patterson, has had on the team in the first four games of the season.

When asked if he was surprised by Patterson’s impact on the offense.

“Yes, I had a ton of respect for him as a player coming in, but the impact he’s made through four weeks has been awesome,” Ryan said. “He’s a really good football player, he’s a throwback, he’s a guy that does everything. He’s playing special teams, covering kicks, running the football for us, catching the ball out of the backfield, lining up outside running routes.

“There’s really nothing offensively or special teams-wise he can’t do and that’s a huge deal for us. He’s been a big part of our ability to move the football and score points in the first quarter of the season.”

On Thursday night, the Atlanta Falcons hosted the New England Patriots in a matchup between playoff contenders. Atlanta hasn’t looked like the best team all season, but the Falcons entered tonight’s game in the thick of the wild card race. However, after tonight is over, the Falcons will likely be on the outside looking in.
NFL・12 DAYS AGO
Falcon Report

For Michael Vick to ultimately be right about this edition of the Atlanta Falcons, they need more weapons.
NFL・12 DAYS AGO
92.9 The Game

The Falcons are now 4-4 this year and currently hold the final playoff spot in the NFC. Dukes & Bell talked about the play of veteran Quarterback Matt Ryan and why he’s a big reason why the team has exceeded expectations so far this season.
NFL・22 DAYS AGO

Falcons Coach Arthur Smith: 'My Money is on Matt Ryan'

Atlanta Falcons head coach Arthur Smith felt good about his chances of a comeback with Matt Ryan at the helm.
NFL・22 DAYS AGO
92.9 The Game

Atlanta Falcons head coach Arthur Smith has seemingly found the right formula that has led to Cordarrelle Patterson being on of the biggest surprises around the NFL this year.
NFL・22 DAYS AGO
USA TODAY Sports Media Group

The Atlanta Falcons host the New England Patriots on Thursday night and the question on everyone’s mind is whether or not running back Cordarrelle Patterson will suit up. Patterson, the Falcons’ best offensive player by a mile this season, injured his ankle in the first half of Sunday’s loss to the Dallas Cowboys.
NFL・13 DAYS AGO

Matt Ryan has been a superstar in Atlanta. It’s hard to argue that the five time Pro Bowler and 2016 All Pro hasn’t been the best QB in Falcons’ franchise history. But all good things must come to an end. Despite posting his best completion percentage since 2018, Ryan’s performance...
NFL・3 DAYS AGO
FanSided

Atlanta Falcons must find a way to re-sign Cordarrelle Patterson

The one consistent bright spot for the Atlanta Falcons this season has been Cordarrelle Patterson. When the team needed a play most or when it seemed the rest of the offense couldn’t do anything but get in their own way Patterson made a play. Whether it was his game-winning catch...
NFL・10 DAYS AGO
profootballnetwork.com

Cordarrelle Patterson has been one of the greatest fantasy football stories in recent NFL history. But an ankle sprain suffered in Week 10 against the Cowboys is threatening to keep him sidelined on Thursday Night Football against the Patriots. What is Patterson’s injury and fantasy outlook in Week 11 and beyond?
NFL・14 DAYS AGO
NESN

Cordarrelle Patterson is inactive for Week 11 against the Patriots

Cordarrelle Patterson is out of the Falcons’ Thursday night matchup against the Patriots. Patterson looked good in pre-game warmups but ultimately couldn’t get final clearance. Patterson has been dealing with an ankle injury and with a shortened week was a game-time decision. This is a massive loss for the Falcons because Patterson is one of the team’s best offensive weapons. Patterson is Atlanta’s leading rusher and is second on the team in receiving yards. He is having a career year, amassing 473 receiving yards, 303 rushing yards, and seven touchdowns this season. Atlanta will now rely on Mike Davis, Wayne Gallman, and Qadree Ollison to fill the rushing void. While Marvin Hall, Russell Gage, Olamide Zaccheaus, and Tajae Sharpe will comprise the Falcons’ receiving options.
NFL・12 DAYS AGO

Atlanta Falcons QB Matt Ryan started the season off slow but since Week 3, has been one of the best and most efficient quarterbacks in the league right now. Has he solved the Falcons QB situation moving forward?
NFL・19 DAYS AGO
USA TODAY

Opinion: With Falcons, Cordarrelle Patterson has unlocked his ability as one of NFL's top do-everything talents

Cordarrelle Patterson played for four other teams in the past eight years, but it wasn't until he landed with the Falcons that he truly broke out.
NFL・12 DAYS AGO
atlantafalcons.com

FLOWERY BRANCH, Ga. -- Falcons offensive playmaker Cordarrelle Patterson was limited in a Tuesday practice leading up to Thursday night's showdown with the New England Patriots, according to the team's participation report. Patterson was also considered limited on a Monday practice estimation -- the Falcons didn't actually conduct a workout...
NFL・14 DAYS AGO
NBC Sports

Falcons running back Cordarrelle Patterson will not play in Thursday Night Football. He was among the team’s inactives after being a game-time decision. Patterson has an ankle injury that limited him in practice all week. Patterson played only 15 offensive snaps and five special teams snaps Sunday against the Cowboys...
NFL・12 DAYS AGO
Falcon Report

When Will Injured Cordarrelle Patterson Return for Falcons?

The Atlanta Falcons have been hapless on offense without Cordarrelle Patterson. When could he be return?
NFL・11 DAYS AGO
Yardbarker

How Does the Offense Improve? Matt Ryan has Answers

The Atlanta Falcons offense has been anemic the last two games. Atlanta has been outscored by a combined 68-3 in losses to the Dallas Cowboys and New England Patriots. Quarterback Matt Ryan believes the team is poised to get better this week against the Jacksonville Jaguars. "I think it's about...
NFL・6 DAYS AGO
Sports Illustrated

Discover player props odds, plays, and insights for Matt Ryan in his Week 12 contest with the Atlanta Falcons against the Jacksonville Jaguars.
NFL・2 DAYS AGO
The Atlanta Journal-Constitution

Here’s what Jacksonville quarterback Trevor Lawrence, who starred at Cartersville High and Clemson, had to say to the Jacksonville media Wednesday:. (On making the offense more creative): “I don’t think it’s all about creativity. I think it’s mostly about execution. That’s something we’ve talked about a lot and that’s something we’ve met about, we’ve met as an offense and talked about. We just have to get better. We have to execute. It’s the details and the stuff that is in, whatever the install is or whatever our game plan is, we have to know it like the back of our hand and execute that. I think that’s the starting point. I think going from there and then you can add wrinkles, you can do whatever, but I just think that’s where we have to start out. I don’t think it’s always about creativity, just my honest opinion. Sometimes it is, but I don’t necessarily think that’s the sole reason. I think it’s on all of us. We have to be better. We just have to execute more.”
NFL・5 DAYS AGO