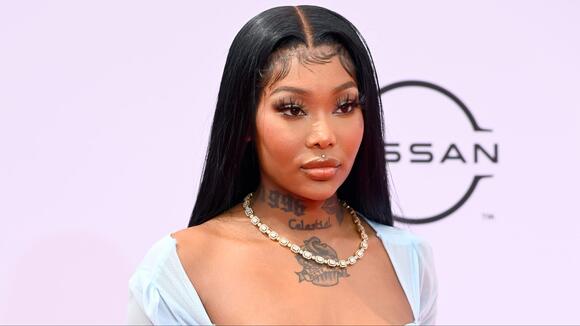 In the clip, she is on a call with JT from City Girls (whom she’s rumored to have collaborated with) while the rapper is still in prison. The women joked, saying, “You already know how it is when we get together.”

Walker also mentioned during a Twitter Q&A that her sophomore LP will have “more tracks than the last” and she will be dropping a single (or two) ahead of its release. Watch the full teaser below.

Read the original story below.

According to Summer Walker’s now-infamous hard drive, and a set of custom jerseys, her untitled sophomore album is set to drop on Nov. 5.

The Atlanta-bred singer began teasing her second album on Saturday (Oct. 2) following reports that she was denied entry into the 2021 BET Hip-Hop Awards, due to COVID-19 restrictions. The teaser read, “ For everyone that keep asking me ‘Where The Album At’ It’s right here and Im keeping it on me! We outside tonight too! (follow @summersharddrive on Instagram) for more updates !!”

The release date announcement comes on the second anniversary of her debut album, Over It . Her 2019 LP made history by being the most-streamed album by a female R&B artist ever—a record previously held by Beyoncé’s Lemonade .

Upon finding out about the monumental feat, the “Playing Games” singer wrote, “Wow..just found out Over It is the biggest debut album from a female r&b artist in over 10 years and had the biggest streaming week for a female r&b artist ever thank y’all so so much for the love & support y’all got us breaking records and sh*t!!! and special thank u to @londonondatrack & @lvrngram @interscope we makin’ history.”

A tracklist for Walker’s sophomore album has yet to be announced, but it’s been rumored that she has a track with JT of City Girls entitled “Ex For A Reason.”

R&B starlet Summer Walker gave a performance of her hit single, “Unloyal,” at the 2021 Soul Train Awards. She graced the stage alongside collaborator Ari Lennox. Clad in a white dress lit by the glow of the stage lights, Walker crooned lyrics while backed by a live band, setting the mood for an intimate performance from the two-time Soul Train Award winner. Singing, “I ain’t taking your sh*t today,” Walker gave room for her band’s saxophonist to give a soul-stirring solo before beckoning Lennox (who performed earlier in the evening) to join her. Dressed in a leather outfit, Lennox seamlessly picked...
CELEBRITIES・4 DAYS AGO
Vibe

Capitalizing on women’s continued dominance in Hip-Hop, seasoned actress and rookie director Halle Berry recruited all women rappers and musicians for the soundtrack to her directorial debut, Bruised. Along with fellow Executive Producer Cardi B, Berry curated a tracklist of original songs inspired by the film. “I can’t wait to show it,” Berry shared with Variety ahead of the compilation’s release. “I have to tell you, one of the things I’m most excited about is the title song that H.E.R. sang… and she killed it. I can’t wait to share with everyone and am super excited. The Bruised soundtrack officially dropped on Friday...
MUSIC・13 DAYS AGO
Vibe

“I’m excited to start this new wave,” Lucky Daye tells VIBE backstage at this year’s Day N Vegas music festival. The R&B singer was eager to discuss his artistry as he stood in a small media tent.   The 36-year-old has slowly risen in ranks among mainstream R&B performers after years of working in the music industry, first establishing himself as a songwriter and background vocalist in 2008. Daye released his first EP, I, in 2018, and his second EP, II, the following year just ahead of his acclaimed debut LP, Painted. The album earned the New Orleans native four Grammy nominations. Since its release, he’s dropped a string of singles, guest appearances, and EPs, but now, it is time for another album.  Read our conversation with Lucky...
THEATER & DANCE・12 DAYS AGO
hotnewhiphop.com

She may have recently described her romance with LVRD Pharoh as "new" and "nice," but he returned to say that he's no stranger to Summer Walker. The couple has been sharing their lovey-dovey moments on social media as they encourage one another and lift each other up, but Summer can't shake those that continue to bring up her ex, London On Da Track.
CELEBRITIES・9 DAYS AGO

Summer Walker and London on da Track have never been the type to shy away from feuding in public, but the former lovers and current co-parents also have a tendency to sing one another’s praises in the spotlight as well. Following the release of Walker’s sophomore album, Still Over It, the record producer is praising his “4th Baby Mama” heavily.
CELEBRITIES・13 DAYS AGO
hotnewhiphop.com

Summer Walker Wants Young Nudy To Perform At Her Wedding

Summer Walker's November was eventful, to say the least. After an album release and making her new relationship official, she is now looking to a secure future with her man as she plans their potential wedding. In a recent Instagram story with her rapper boyfriend Lvrd Pharoh, she asked him...
THEATER & DANCE・2 DAYS AGO
HollywoodLife

Summer Walker & Lvrd Pharoh just got some intimate ink of each others’ names on their faces and now, fans are wondering who the ‘Girls Need Love’ singer’s latest beau is. Find out more about him here!. R&B hitmaker Summer Walker, 25, is smitten with her new man, Lvrd Pharoh,...
BEAUTY & FASHION・9 DAYS AGO
iHeartRadio

Summer Walker Gets New Beau's Name Tattooed On Her Face

The star and her new love Larry got matching face tatts, in the name of love
CELEBRITIES・9 DAYS AGO

The war, which is seemingly one-sided at this point, between Summer Walker and Eboni, the mother of London On Da Track's daughter, rages forward. Summer and London were once a hot industry couple who also were able to make magic in the studio together, and later, the pair welcomed their baby girl into the world.
CELEBRITIES・1 DAY AGO
Vibe

The Weeknd’s “Blinding Lights” Named The New No. 1 Song of All Time

The Weeknd has earned a historic chart placement with his 2019 chart-topper “Blinding Lights.” The song was named the new No. 1 on Billboard’s Greatest Songs of All Time Hot 100 Chart on Wednesday (Nov. 23.) With the accomplishment, the Canadian singer passed Chubby Checker’s “The Twist” which now sits at No. 2. “The Twist” earned the distinction in 2008 with Billboard accounting for separate chart runs in 1960 and again in 1962. The decision factors in total weeks on the chart as well as exact chart positions, with weeks at No. 1 earning the greatest value and weeks at No....
MUSIC・9 DAYS AGO
mixmag.net

Both Timbaland and Missy Elliott have teased a forthcoming joint project on social media this week. “Who ready for that Missy Elliott Timbo album?” US-born songwriter and producer Timbaland tweeted on Wednesday, December 1, alongside some eyeball emojis. It looks as though the longtime collaborators have something in the pipeline,...
MUSIC・1 DAY AGO
thesource.com

The long-running social media joke of women finding Ciara’s prayer turned into an actual prayer on Summer Walker’s album. Appearing on Level Up Radio with Ciara on Apple Music, the songstress revealed how the prayer made it to the Sill Over It album. I’m going to slow this thing down...
MUSIC・2 HOURS AGO

Summer Walker, "Still Over It" (Interscope) Her casually devastating sophomore record is Walker's second excellent album in a row and very much in the spirit of the great Mary J. Blige and Faith Evans albums of the mid-to-late 1990s. It's about her now-dissolved relationship with the producer London on da...
MUSIC・15 HOURS AGO
Audacy

Clearly no commitment issues here. Summer Walker and her new boyfriend LVRD Pharaoh, are showing off their new, matching face tats and some PDA in a short and sweet video montage on Instagram.
CELEBRITIES・9 DAYS AGO
Vibe

Rapper YoungBoy Never Broke Again has proven himself to be one of the most bankable young stars in the rap game, with a loyal legion of fans who religiously support his single, music video, and album releases—making the recent purge of the music videos published on his YouTube page even more peculiar. The Baton Rouge native has racked up over nine billion views combined on his YouTube page to date. Yet, his manager, Alex Junnier, has accused YouTube of failing to properly advertise and support YoungBoy’s Sincerely, Kentrell album. View this post on Instagram A post shared by DJ Akademiks (@akademiks) While...
BEHIND VIRAL VIDEOS・2 DAYS AGO
HipHopDX.com

Most people want to go to a celebrity afterparty to rub shoulders and mingle with whichever stars are in the house. Fabolous has been to several events in his day, but it appears he feels some of those parties weren’t all they were cracked up to be. The Brooklyn rapper...
CELEBRITIES・1 DAY AGO
Vibe

It appears fans of Meek Mill’s Dreamchasers mixtape series won’t have to wait much longer for a new volume. The rap star announced that Dreamchasers‘ fifth edition will be available sometime in 2022, albeit in the form of an NFT. He also inferred that the next installment in the series will be its last. The Philly native shared the news via a post on his Instagram account over the holiday weekend. “#DCPOUNDCAKE LAST DREAMCHASER MIXTAPE A NFT …. LOYALTY CLUB STARTS JANUARY.1st 2022,” Meek captioned the clip of him playing a snippet of unreleased music. He also revealed that fans “can...
CELEBRITIES・3 DAYS AGO
Echo online

Review: Summer Walker is here with a new album

One of the hottest talents in RnB is back with her album ”Still Over It,” filled with plenty of songs that will leave the listeners in their feelings. Summer Walker’s ability to create relatable music and sing about a toxic relationship was on full display throughout all 20 tracks of this album. Focusing on her past relationship with producer London on da Track, she was truly able to write from the heart. What makes this album a bit more confusing though is that a few of the tracks were written or produced by London himself.
WALKER, MI・13 DAYS AGO
Vibe

Rico Nasty and Flo Milli have joined forces for their new collaboration “Money,” and dropped a vibrant new visual to go along with the song. “Money” is produced by Boys Noize and samples 2 Live Crew’s “We Want Some Pu**y” and Tone Loc’s “Wild Thing.” Both ladies bring their bold attitudes to their verses declaring their desire for cash on their own terms. “Love don’t pay the bills, ni**a,  I ain’t tryna chill with you,” Rico declares during the son’s opening verse. Roxana Baldovin directed the colorful music video which finds Rico Nasty and Flo Milli making their way down the yellow brick road, and later poised atop delicate clouds. The video sees the duo having their way and discarding men. It ends with Rico and Flo being joined by characters resembling Tin Man, Cowardly Lion, and Scarecrow from The Wizard Of Oz.  “Money” is Nasty’s third single since her 2020 debut album Nightmare Vacation, as she’s  dropped a handful of Soundcloud releases this year. This latest single marks the first time she and Flo Milli have collaborated on a track. Watch the music video for Rico Nasty’s “Money” featuring Flo Milli above.
MUSIC・10 DAYS AGO
hotnewhiphop.com

It’s been an interesting month for DaBaby, to say the very least. The recording artist spent the last half of November having a nasty online and in real life feud with his most recent baby mama, DaniLeigh, that’s resulted in him posting some questionable content as of late. Earlier this...
BEHIND VIRAL VIDEOS・4 DAYS AGO