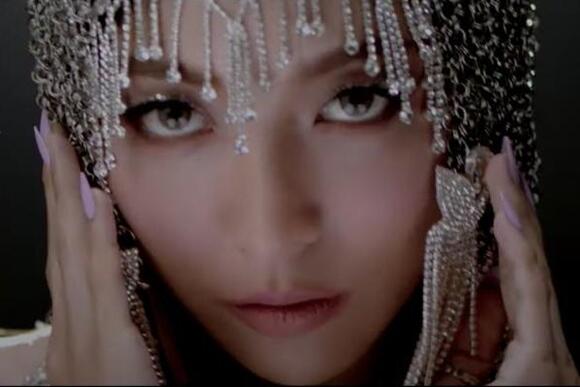 The 28-year-old K-pop star, a member of the girl group f(x), released a preview Monday of her music video for the song "Madonna."

The teaser shows Luna wearing a sparkling headpiece. She is then seen in silhouette while dancing with backup dancers.

Luna also shared a teaser photo for the song on Twitter.

Luna will release the "Madonna" single and music video Wednesday.

Luna released her debut solo EP, Free Somebody, in 2016. Her solo singles include "Don't Cry for Me," "Free Somebody" and "Do You Love Me" featuring George.

Luna came to fame with f(x), which also consists of Victoria, Amber and Krystal. The group released its fourth album, 4 Walls, in 2015.

Olivia Rodrigo had the audience in their feelings with her stripped-down performance of "Traitor," at the 2021 American Music Awards Sunday night. With a guitar in-hand, Rodrigo made her debut on the AMAs stage, delivering an acoustic version of the heartbreak ballad, letting the song's gripping lyrics do the talking.
MUSIC・12 DAYS AGO
People

One of K-pop's biggest stars is set to storm the Great White Way in an upcoming musical about Korea's popular music genre. Sources tell PEOPLE that Luna, a South Korean singer who recently released the popular single "Madonna," will be making her Broadway debut in KPOP, The Musical, which will premiere sometime next year.
MOVIES・11 DAYS AGO
UPI News

Dec. 3 (UPI) -- Chinese boy band WayV is back with a new music video. The group, a subunit of the K-pop boy band NCT, released a video for the song "Miracle" on Friday. The "Miracle" video shows the members of WayV perform a choreographed dance routine. "Miracle" is an...
THEATER & DANCE・9 HOURS AGO
Hello Magazine

Carrie Underwood's exciting update on her much-loved activewear brand, CALIA, was tainted with something unexpected on Friday, when she revealed her new winter range, would be her last. The star looked glowing in new snapshots promoting the line and all the new holiday collection pieces. But fans were saddened to...
BEAUTY & FASHION・6 DAYS AGO

The the days since legendary Memphis rapperYoung Dolph was tragically shot and killed in his hometown, tributes from every corner of the internet have poured in. Speaking to the legacy he leaves behind as a musician, as well as the legacy he leaves behind as a man and a father, seemingly every new social media tribute dedicated to Young Dolph has revealed something new about the Gelato rapper.
CELEBRITIES・14 DAYS AGO
bravotv.com

Kandi Burruss and Todd Tucker’s household just got a little bigger. The Real Housewives of Atlanta cast member and her husband have officially welcomed a new member to their family, as captured in a recent post on Instagram. On November 25, Todd took to Instagram to introduce his family’s adorable...
PETS・7 DAYS AGO
Hello Magazine

Ariana Grande was a scene-stealer with her latest look which got everyone from her fans to her fellow celebrities talking. The Voice star turned heads with her appearance in a multi-colored, Versace dress which showed off her petite figure - but we've seen that outfit before. Ariana looked like a...
CELEBRITIES・23 DAYS AGO
Hello Magazine

It's no secret that Brooklyn Beckham is a fan of cooking, often taking to Instagram to share videos of his culinary creations with his 12.9 million followers. On Sunday, David and Victoria Beckham's eldest son put his cooking skills to the test once again. This time, the 22-year-old whipped up an Italian-inspired meal for his fiancée Nicola Peltz and her friends as the actress enjoyed a girls' night in the duo's $10.5 million Beverly Hills mansion.
CELEBRITIES・11 DAYS AGO

Photos of two gunmen suspected of ambushing and killing rapper Young Dolph as he was buying cookies at a Memphis store on Wednesday have emerged.The 36-year-old artist, real name Adolph Robert Thornton, Jr, was inside Makeda’s Homemade Butter Cookies when two men drove up and fire multiple rounds into the store through a window.Law enforcement confirmed photos of the two suspected shooters, which had been circulating online, were authentic, Fox13 reporter Jeremy Pierre said.In one of the images, Dolph’s camouflage-colored Lamborghini could be seen parked outside of the shop.Music stars Megan Thee Stallion and Chance the Rapper led tributes...
PUBLIC SAFETY・15 DAYS AGO
ETOnline.com

Teyana Taylor is bursting with love and pride for her husband, Iman Shumpert. The 30-year-old singer took to Instagram to celebrate the former basketball player's victory as the winner of Dancing With the Stars' 30th season. Shumpert and his partner, Daniella Karagach, took home the mirrorball trophy during Monday's epic finale. The pair performed an epic freestyle set to both "Lose Control" by Missy Elliott and "Bounce" by DJ Clent that guest judge Julianne Hough called the best freestyle in the show's history.
THEATER & DANCE・10 DAYS AGO
BET

Recent college grad and three-time Grammy Award-winner, Megan Thee Stallion, is heading home to Houston for a special performance at 713 Music Hall. Formerly known as The Terminal, the occasion will celebrate the 5,000-capacity concert venue’s renaming and focus attention on transforming the historic Barbara Jordan Post Office into a hub for culture, food, shopping, and recreation.
MUSIC・29 DAYS AGO
Essence

Learn about Taraji P. Henson’s son Marcell Johnson, who she welcomed with her late high school sweetheart William LaMarr Johnson. Award-winning actress Taraji P. Henson did not let National Sons Day pass this year without paying homage to her son, Marcell Johnson. The Hollywood star, 51, welcomed her son, 27, with the late William LaMarr “Mark” Johnson, her high school sweetheart who was murdered at the age of 34 in 2003. In an Instagram post on National Sons Day in September, Taraji celebrated Marcell, calling him her “heart.”
CELEBRITIES・2 DAYS AGO
TODAY.com

Machine Gun Kelly and his daughter, 12, were the cutest duo at the AMAs

It was take your daughter to work day for Machine Gun Kelly!. The rapper, singer and actor brought his daughter, Casie Colson Baker, 12, to Sunday night’s American Music Awards. Kelly, who won favorite rock artist at the show, wore black pants with a black shirt adorned with silver studs,...
CELEBRITIES・11 DAYS AGO
TVShowsAce

Tristan Thompson made headline news on Friday morning. The NBA star became a trending topic on Twitter along with his ex-girlfriend Khloe Kardashian. Both Tristan and his alleged new baby mama Maralee Nichols claimed that they’re having a child together. This will be the third child for the basketball player.
CELEBRITIES・5 HOURS AGO
DesignerzCentral

Bindi Irwin Is Moving To The U.S. For Baby No. 2 With Husband Chandler Powell

Is Bindi Irwin coming to America? One report says she and Chandler Powell plan to have a second baby in the United States. Gossip Cop investigates. According to OK!, Irwin and Powell are chasing a fortune to California. The activists want to secure lucrative Hollywood deals to help keep the Australian zoo afloat. “It’s been bleeding profits due to the pandemic.” an insider explains. “Bindi and Chandler have been pitching a TV show and other ideas and want to visit LA soon to do meet and greets.”
CELEBRITIES・1 DAY AGO
Insider

The rapper's look was designed by Eli Russell Linnetz, who said he texted Kid Cudi a picture of a wedding dress and asked, "Will you be my bride?"
NEW YORK CITY, NY・22 DAYS AGO
HelloBeautiful

Kenya Moore Strikes A Pose On Instagram In A $2,985 Fendi Jumpsuit

The Real Housewives of Atlanta star stepped out in a black and white $2,985 Fendi jumpsuit, and you already know she was well put together.
BEAUTY & FASHION・16 DAYS AGO
KGO

LOS ANGELES -- Get ready to side step, left-right, to their beat: BTS will take the stage with Megan Thee Stallion for the televised world premiere performance of "Butter" at the 2021 American Music Awards. BTS and Megan Thee Stallion were among the first crop of 2021 AMA performers announced...
CELEBRITIES・25 DAYS AGO
SheKnows

Kelly Clarkson has been through so much over the course of more than a year. She’s endured a very public divorce and custody battle with ex-husband Brandon Blackstock, all while performing, hosting her talk show, serving as a coach on The Voice and more. But during her Christmas special last night, the original American Idol gave fans a glimpse of just how emotional this time of year is for her when she seemingly started crying after performing her song “Merry Christmas (To The One I Used to Know).”
CELEBRITIES・1 DAY AGO