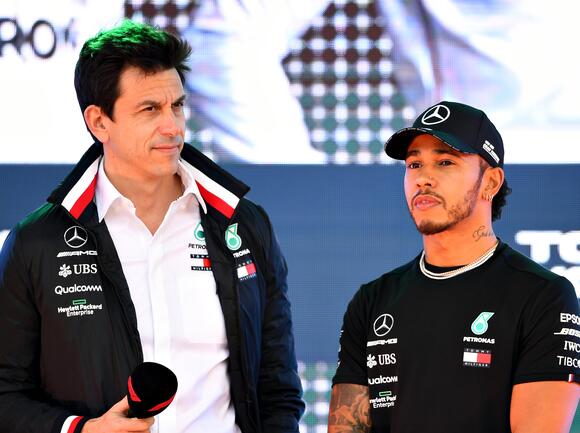 Lewis Hamilton has been warned by Mercedes team principal Toto Wolff that DNFs are a “no go” if the Briton is to retain his Formula One title.

Hamilton, 36, beat the Red Bull driver to first place at the Russian Grand Prix last time out, but at the calendar’s previous event – the Italian GP – the pair took each other out of the race.

That incident marked their second coming-together this year, following the rivals’ crash at the British Grand Prix in July. On that occasion, Hamilton went on to win the race while Verstappen recorded a DNF (‘did not finish’).

Wolff, however, is concerned that Hamilton might not be so lucky if another incident occurs, and the Austrian has warned his driver that he must finish every race left this season if he is to win a record eighth F1 title.

“I think neither driver and neither team can have any comfort in the current situation, because there is just no gap in terms of points and I think that this is going to go very long,” Wolff told Formula1.com .

“Reliability versus performance is always the fine line that you need to get right, and as I said before, DNFing obviously is a no-go for the championship.

“Nobody, neither us nor our competitors, can afford a zero-point race weekend.”

The next race on the F1 calendar is the Turkish Grand Prix on Sunday. Last year’s edition of the event saw Hamilton emerge victorious to claim the 2020 drivers’ championship.

F1 legend and former McLaren champion Mika Hakkinen clearly warns Max Verstappen amid the dutchman’s tight championship race with Lewis Hamilton. Hakkinen has had his fair share of success with McLaren, winning it all in 1998 and 1999. With that, the Finnish driver knows what it takes to succeed in the sport, even with daunting challenges and world-class opponents.
MOTORSPORTS・13 DAYS AGO
SkySports

This Formula One world championship is becoming very intense, emotional, and at times personal, and the Qatar Grand Prix heightened that. I've not experienced such intensity before. This is a season which is unfolding on a swathe of contrary opinions, camera angles, images, data, information, misinformation, social media posts, and not a little bitterness and mistrust. It felt more like a movie than a motor race on Sunday.
MOTORSPORTS・8 DAYS AGO
Daily Mail

Max Verstappen ended an explosive day in the title battle against Lewis Hamilton narrowly quicker than his rival in Friday practice at the Qatar Grand Prix. Verstappen came into the weekend subject to a Mercedes review request regarding his defensive driving against Hamilton at the Sao Paulo Grand Prix last time out.
MOTORSPORTS・12 DAYS AGO
Motorsport.com

A representative from the Mercedes team is required to report to the FIA via video conference at 17:00 local time on November 18 as per a steward document issued on Wednesday ahead of the inaugural Qatar Grand Prix. The FIA said the hearing is to determine whether Mercedes has the...
MERCEDES, TX・14 DAYS AGO

Lewis Hamilton's new Mercedes engine helped deliver one of his most famous wins in Brazil... but why was it so quick and can the Brit rely on it lasting in the final three races as his intense title battle with Max Verstappen comes to the boil?

Much was made of Lewis Hamilton's storming performance to go from 10th at the start of the Sao Paulo Grand Prix to passing chief title rival Max Verstappen in dramatic fashion to clinch a key win. It wasn't just the nature in the way he did it - having had...
MOTORSPORTS・13 DAYS AGO
Motorsport.com

Mercedes suffered back-to-back defeats to Red Bull in the United States and Mexico, allowing Max Verstappen to open up a 19-point lead over Lewis Hamilton in the drivers’ standings. Hamilton feared he would lose yet more ground on Verstappen in Brazil, only to fight back from being excluded from qualifying...
MOTORSPORTS・14 DAYS AGO
The Independent

Follow all the latest Formula One news with Max Verstappen anxiously waiting to see if he will be punished for the incident involving Lewis Hamilton at the Brazilian Grand Prix.The seven-time world champion won Sunday’s race in fine style following a superb comeback drive, but championship leader Verstappen escaped punishment for running his rival off the road as they battled for first position late in the race.The stewards noted the incident before looking at the footage and choosing not to launch a formal investigation, a decision Mercedes chief Toto Wolff later called “laughable”. However, Mercedes have since been granted...
MOTORSPORTS・13 DAYS AGO
racingnews365.com

Hakkinen: F1 title race will continue to shift between Mercedes and Red Bull

Mika Hakkinen has hinted that Red Bull should be worried about the pace of Mercedes heading into this weekend's Qatar GP. Mika Hakkinen believes the title fight between Max Verstappen and Lewis Hamilton will continue to swing in the remaining three events. Verstappen has a lead of 14 points over...
MERCEDES, TX・14 DAYS AGO

Before the Brazilian Grand Prix, there were many race fans who ruled out Mercedes and their ace driver Lewis Hamilton out of the championship race. Yet with the Brackley based team making a comeback with both their drivers registering podium finishes, George Russell feels that it is absolutely stupid to write off his future team and teammate just yet ahead of the start of the 3 Middle-Eastern races.
MOTORSPORTS・13 DAYS AGO
ClutchPoints

F1 rising star George Russell makes a wild response to those betting against Lewis Hamilton amid his intense title race with Max Verstappen. Hamilton put on a masterclass in Brazil, garnering another race win after starting from P10 due to his fresh engine’s penalty. Despite Verstappen’s start from P2 and Mercedes teammate Valtteri Bottas’ pole position, Hamilton managed to rise above all with the odds stacked up against him.
MOTORSPORTS・13 DAYS AGO
Autoweek.com

Mercedes' Lewis Hamilton tightened the gap on Red Bull's Max Verstappen with the win at the inaugural F1 Qatar Grand Prix on Sunday at Doha, Qatar. Hamilton won easily from the pole. He was never passed, never trailed, and ultimately won by a margin of 25.7 seconds over Verstappen, who did pit late for tires in a successful effort to gain the bonus point for fastest lap.
MOTORSPORTS・10 DAYS AGO
SPORTbible

Lewis Hamilton and Mercedes could be in danger of losing this year's F1 World Championship in the courtroom rather than on the race track, as Red Bull contemplate a protest against the Merc's rear wing. The battle between Red Bull and Mercedes has been extremely tight all season, with tensions...
MOTORSPORTS・11 DAYS AGO

The Red Bull driver’s behaviour is under the spotlight in Qatar this weekend with Mercedes asking the FIA for a right to review its decision not to investigate the incident with Hamilton on lap 48 at Interlagos. Mercedes' request has been prompted by the emergence earlier this week of the...
MOTORSPORTS・13 DAYS AGO
ESPN

LUSAIL, Qatar - Lewis Hamilton says the rules around wheel-to-wheel racing in Formula One are no longer clear after the FIA opted against reviewing the incident in which Max Verstappen forced him off the track at the Sao Paulo Grand Prix. Verstappen and Hamilton both ended up in the run-off...
MOTORSPORTS・11 DAYS AGO
ClutchPoints

F1 star Max Verstappen shares a mature take on his intense title race with Lewis Hamilton. Despite qualifying for P2 at the start of the race, Verstappen was overtaken by Hamilton, who had the odds stacked against him as he started from P10 but won the Brazilian Grand Prix. Typically,...
MOTORSPORTS・13 DAYS AGO
Channel 3000

There are just three races to go in one of the hardest fought, most closely contested Formula One championships in recent history — and Valtteri Bottas believes he knows where the drivers’ title is headed. His Mercedes teammate Lewis Hamilton trails Red Bull’s Max Verstappen by 14 points ahead of...
MOTORSPORTS・12 DAYS AGO
firstsportz.com

As the current Formula 1 season comes to an end, the 2022 grid has been finalised after a long wait. There are several changes in the grid, with the addition of Guanyu Zhou and Alex Albon and the retirement of Kimi Raikonnen and even Antonio Giovinazzi. Another major change in the lineup will be Valtteri Bottas’ move to Alfa Romeo and most importantly George Russell who will be taking the esteemed Mercedes spot.
MOTORSPORTS・12 DAYS AGO
NBC Sports

LOSAIL, Qatar — Lewis Hamilton inched closer to the Formula One championship lead with a dominating victory Sunday in the inaugural Qatar Grand Prix, where Max Verstappen overcame a grid penalty to finish second. Hamilton, who also won last week in Brazil, has trimmed 17 points from Verstappen’s lead in...
MOTORSPORTS・10 DAYS AGO
newschain

Lewis Hamilton admits new camera angles of his run-in with title rival Max Verstappen at the Brazilian Grand Prix have changed his decision on the incident – but stopped short of calling for the Red Bull driver to be hit with a retrospective punishment. Hamilton took the chequered flag at...
MOTORSPORTS・13 DAYS AGO