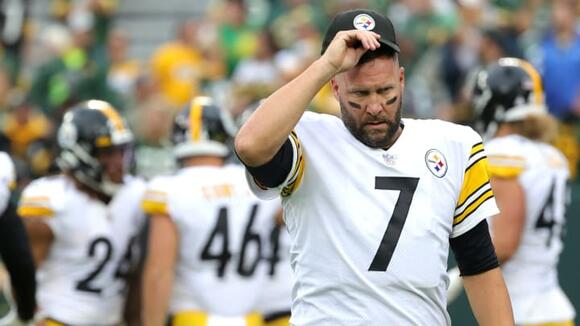 The Pittsburgh Steelers lost to the Green Bay Packers 27-17 on Sunday to drop to 1-3, and things look bleak in the Steel City. One thing is clear from the first four weeks of the season, Ben Roethlisberger is toast. It's time for Big Ben to hang 'em up.

Roethlisberger had yet another depressing game on Sunday. He completed 26 of 40 passes for 232 yards, with one touchdown and an interception. Once again, Big Ben struggled to push the ball down the field and averaged 5.8 yards per attempt. He had open receivers and simply struggled to make routine throws. It was sad to watch.

It was a performance in line with what we've seen this season from the 39-year-old this season. He can't move in the pocket, doesn't have the arm strength to make plays down the field and simply isn't physically up to the task anymore.

Through four games, Roethlisberger has completed 109 of 170 (64.1 percent), for 1,033 yards, with four touchdowns and four interceptions. He has dismal passer rating of 78.9, and entered this week with a Total QBR of 35.1. It's unlikely to go up much and will place him near the bottom of the league.

While the Steelers don't have a long-term succession plan at quarterback -- no, Mason Rudolph doesn't count -- they really need to change something. Roethlisberger hasn't looked healthy or capable in years. It has gotten sad.

A two-time Super Bowl champion and seven-time Pro Bowler like Roethlisberger doesn't deserve to go out like this. But it's long past time for him to sit in favor of Rudolph, then retire with dignity at the end of the season.

hang it up buddy. I'm proud of you even though I'm not a Steelers fan.. time to go fishing, analyze on ESPN and enjoy your well earned work. you're always a champion in my books and can't wait to see you in the hall of fame

Hung on a couple years too long. Great career, but it's over Ben. Unfortunately for the Steelers, there really isn't a viable replacement available to win this year. This year is a wash for them. Get a good draft pick and draft a future QB. Couple years too late, but that should be the plan.

The Steelers are one of the best franchises in professional sports. It surprises me that a few years ago they didn't prepare for this day. They should have done what the Packers did when preparing Aaron Rodgers to take Favre's place.

The Pittsburgh Steelers had their most embarrassing loss of the season yesterday, getting absolutely obliterated by the Cincinnati Bengals in a crucial AFC North tilt. Whether it's the worst game of Pittsburgh's season depends on your view of their 16-16 tie with the Detroit Lions, but it was without a doubt the worst defeat of the year. The game was over by halftime. The Steelers looked entirely uninterested in stopping Joe Burrow or Joe Mixon. Ben Roethlisberger looked awful yet again.
NFL・3 DAYS AGO
The Big Lead

The Cincinnati Bengals kicked the crap out of the Pittsburgh Steelers in week 12. Cincy lead the entire game and the result was never in doubt so it's no surprise that the Steelers were frustrated. During the second quarter, with the Bengals leading, 24-3, Joe Burrow threw an interception and TJ Watt got physical with the quarterback.
NFL・4 DAYS AGO
The Big Lead

The Los Angeles Rams are having a rough time against the Green Bay Packers Sunday afternoon. Apparently that frustration boiled over with star defensive lineman Aaron Donald, who at one point was caught on camera choking Packers offensive lineman Lucas Patrick. Here's video of the incident:. Having anyone grab your...
NFL・4 DAYS AGO
cbslocal.com

PITTSBURGH (KDKA) – The Steelers are planning to start Mason Rudolph as quarterback against the Chargers, but coach Mike Tomlin said he’ll “leave the light on” for Ben Roethlisberger if he tests negative for COVID-19. “We’re going to build our plan around getting Mason ready to play,” Tomlin said at his Tuesday press conference. “We’re going to highlight his talents and skills relative to the opponents we intend to play.”
NFL・16 DAYS AGO

Mike Tomlin appears to have his made his decision about who will start at quarterback for the Steelers on Sunday. Tomlin appeared on Pittsburgh’s 93.7 The Fan to talk about the team’s QB situation, the Chargers, and more. Per 93.7’s Andrew Filliponi, the Steelers will “build” their plan around Mason...
NFL・16 DAYS AGO
Yardbarker

Tom Brady knew that as he got older and his career headed towards its end, Bill Belichick would not keep the aging quarterback on the New England Patriots. The Pittsburgh Steelers apparently plan to handle Ben Roethlisberger differently. FOX Sports NFL reporter Jay Glazer, who is friendly with Steelers head...
NFL・14 DAYS AGO
The Spun

Ben Roethlisberger Has Interesting Comment About Blowout Loss vs. Bengals

Ben Roethlisberger wants to turn the page on the Steelers 41-10 beatdown at the hands of the Bengals on Sunday. And he said as much to the media on Tuesday. Calling the blowout loss “chewed bubblegum that’s been spit out.”. When asked about the 31-point loss to Cincinnati, Big Ben...
NFL・1 DAY AGO

Until last weekend, the Pittsburgh Steelers were the only NFL organization not to have a team member added to the reserve/covid list. After two top players tested positive within a three-day span, the Steelers could be short-handed on each side of the ball when they play at the Los Angeles Chargers on Sunday night.
NFL・16 DAYS AGO
The Spun

Longtime NBC analyst Cris Collinsworth shared some interesting information on Pittsburgh Steelers quarterback Ben Roethlisberger during tonight’s broadcast. Roethlisberger has been out for nearly two weeks after landing on the COVID-19 list. However, he bounced back in time to play on Sunday night. According to Collinsworth, Roethlisberger mainly kept in...
NFL・11 DAYS AGO
Steelers Depot

Despite one of the worst losses of the Mike Tomlin era, few Pittsburgh Steelers starters were removed from the game. Most notably, Ben Roethlisberger, who was not sat down in a game the Steelers had no chance of coming back and winning. In his post-game press conference, a brief one,...
NFL・4 DAYS AGO
FanSided

The Pittsburgh Steelers should have pulled Ben Roethlisberger from an ugly blowout vs the Bengals, but here’s the real reason why they left him in the game. Despite Ben Roethlisberger coming off one of his best performances in recent memory against the Los Angeles Chargers, the Steelers didn’t show up to play football against the Cincinnati Bengals in Week 12. Obviously, there is plenty of blame to pass around.
NFL・3 DAYS AGO

PITTSBURGH — Big Ben is back and ready to play. The Pittsburgh Steelers announced Saturday that quarterback Ben Roethlisberger had been taken off COVID-19 protocols and will be added to the team’s 53-man roster, NFL.com reported. Roethlisberger, who tested positive for COVID-19 last Saturday, will fly separately to Los Angeles...
NFL・12 DAYS AGO
CBS Sports

Ben Roethlisberger has cleared COVID-19 protocols and is expected to start for the Steelers' Week 11 road game against the Chargers. Roethlisberger, who was activated to the 53-man roster on Saturday morning, will fly separately to Los Angeles on the team's charter plane. The veteran quarterback missed the Steelers' Week...
NFL・12 DAYS AGO
On3.com

After being activated to the Pittsburgh Steelers’ 53-man roster after passing the NFL’s required COVID-19 protocols, quarterback Ben Roethlisberger will play Sunday in the Steelers’ game against the Los Angeles Chargers. After testing positive for COVID last week and missing Pittsburgh’s game against the Detroit Lions, Roethlisberger has now passed...
NFL・11 DAYS AGO
Steelers Depot

Buy Or Sell: Mason Rudolph Should Start Even If Ben Roethlisberger Is Cleared Saturday

The regular season marks the culmination of an extensive investigation into who your team will be that year. By this point, you’ve gone through free agency, the draft, training camp, and the preseason. You feel good in your decisions insofar as you can create clarity without having played meaningful games. But there are still plenty of uncertainties that remain, whether at the start of the regular season or the end, and new ones continually develop over time.
NFL・13 DAYS AGO
Steelers Depot

Mason Rudolph Hoping To Start, But Will ‘Support The Crap Out Of’ Ben Roethlisberger If He Doesn’t

Being a backup quarterback requires a certain level of selflessness. In order to do your job at the highest level, you have to put in virtually the same amount of work as the starter—if not more—only to sit on the bench during the games without the opportunity to contribute, unless something goes wrong.
NFL・14 DAYS AGO
PITTSBURGH TRIBUNE-REVIEW

Refreshing sports notes are the Thanksgiving dinner of journalism: Something for everybody, and a lot of it. Dig in!. • Cam Heyward and Ben Roethlisberger were the primary factors in the Steelers rallying to almost win Sunday at Los Angeles. They’re focused professionals and real Steelers. Heyward was double-teamed all night and kept going ‘til he made plays. Roethlisberger’s stats (28 for 44, 273 passing yards, three touchdowns, zero picks) speak for themselves, and he never says die. Heyward and Roethlisberger are big-time leaders on a team that could use more followers.
NFL・9 DAYS AGO
Steelers Depot

To put it mildly, Ben Roethlisberger has had a heck of an eight-day stretch. From testing positive for COVID eight days ago, shelving him for the Pittsburgh Steelers’ Week 10 tie against the Detroit Lions, to getting cleared one week later and having one of his best games of the season in Sunday night’s loss to the Los Angeles Chargers.
NFL・11 DAYS AGO
ESPN

INGLEWOOD, Calif. -- After missing a week of practice on the reserve/COVID-19 list, Ben Roethlisberger did what he does best. The Pittsburgh Steelers (5-4-1) lost to the Los Angeles Chargers 41-37 on Sunday night, but Roethlisberger rebounded from a bout with the virus to turn in a signature performance. He...
NFL・10 DAYS AGO