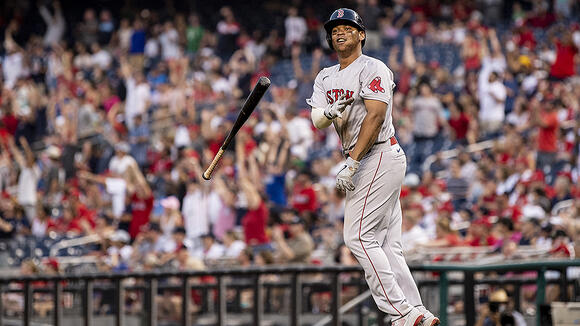 BOSTON (CBS) — The Red Sox needed all 162 games of the regular season to claim the top AL Wild Card spot, but they did so in dramatic fashion on Sunday afternoon.

For much of the day on Sunday, it looked like Boston would need to play a 163rd game to have a shot at the postseason. But the team rallied from a 5-1 deficit against the Washington Nationals to earn a 7-5 victory and series sweep, thanks to the big bat of third baseman Rafael Devers.

Devers broke up a 5-5 tie in the top of the ninth with a monster 447-foot two-run homer to center, his second blast of the day. He drove in four of Boston’s seven runs on the afternoon to send the Red Sox to the postseason.

Boston will now host the New York Yankees in the AL Wild Card game Tuesday night at Fenway Park. Both teams finished the regular season with 92-70 records, but Boston owned the tie-breaker over the Yankees after winning the season series 10-9.

The Red Sox trailed 5-2 in the top of the seventh but rallied to tie the game. Devers slapped an RBI single to make it 5-3, and a few batters later, Alex Verdugo ripped a two-run double to knot things at 5-5.

Devers also mashed a solo homer in the top of the fourth that traveled 432 feet. He finishes the season with a career-high 38 homers to go with 113 RBIs on the season.

Boston starter Chris Sale lasted just 2.1 innings on Sunday, and got the hook from Alex Cora after walking in a run in the bottom of the third to give Washington a 2-0 lead. The Nationals added three more runs in the bottom of the fifth off Garrett Richards, two of which came off a double by Alex Avila, who is set to retire after Sunday’s game.

Boston’s win capped off a wild final day of the regular season in the American League. The Yankees walked off for a 1-0 win over the Tampa Bay Rays, clinching their spot in the postseason, while the Toronto Blue Jays kept pace with a 12-4 win over the Orioles. Had Boston lost, the Red Sox would have had to play a play-in game against the Blue Jays at Fenway Park on Monday night for the right to face the Yankees on Tuesday.

But thanks to a some big swings by Devers on Sunday, Boston is now preparing for a home playoff game. Nathan Eovaldi will start for the Red Sox, opposed by Gerrit Cole for the Yankees.

The winner of Tuesday’s Wild Card game will advance to the ALDS against the Tampa Bay Rays.

The New York Yankees seemingly have been tied to each free agent this offseason, but reportedly got one of their guys Monday. The Yankees signed former Boston Red Sox shortstop José Peraza to a minor league deal, according to Dan Martin of the New York Post. Peraza has bounced around...
MLB・3 DAYS AGO
Boston

One of MLB’s fastest players — if not the fastest — is coming to Boston. The Red Sox announced Friday afternoon that they had claimed speedster outfielder Tim Locastro off waivers from the New York Yankees. Locastro, a 29-year-old who has played with Los Angeles Dodgers, Arizona Diamondbacks, and Yankees,...
MLB・27 DAYS AGO
Tv20detroit.com

The New York Yankee family was saddened to learn of the passing of ex-Yankee manager Bill Virdon. Virdon was manager of the Yankees during 1974 and 1975 before being replaced in 1975 my the new manager Billy Martin. In 1974 he won 89 games for the Yankees. However, Virdon’s claim...
MLB・8 DAYS AGO
International Business Times

The New York Mets are skimming the free-agent pool, and one name that could make sense would be Steven Matz. Ironically, the 30-year-old pitcher is the same guy the Mets traded to the Toronto Blue Jays last winter. A reunion between the Mets and Matz would make sense considering the...
MLB・14 DAYS AGO
FanSided

The Boston Red Sox continued to add to their organizational depth, signing former Detroit first-round pick Christin Stewart to a minor-league deal with an invitation to big-league camp.
MLB・2 DAYS AGO

There are 1,200 major-leaguers. If you were to rank them all based on the likelihood of the Red Sox acquiring them, Jackie Bradley Jr. might have been right at the bottom of the list. Yet less than 30 minutes before the start of baseball’s first work stoppage in 26 years,...
MLB・1 DAY AGO
NJ.com

More problems for Robinson Cano. The New York Mets announced Wednesday “Canó was removed from the Estrellas Orientales roster with lower back discomfort. He has been prescribed physical therapy and is considered week to week.”. ESPN’s Hector Gomez was the first to report on Cano’s plans to play in the...
MLB・8 DAYS AGO
NESN

The Boston Red Sox will be letting Garrett Richards and Martín Pérez return to the free agent market. Both players had their team options declined for the 2022 season, making them free agents. MassLive’s Chris Cotillo had the news on Richards, and The Boston Globe’s Alex Speier reported the Pérez decision.
NFL・25 DAYS AGO

Houston, we have a problem. The New York Yankees watched the Astros swoop in Wednesday and sign free-agent right-hander Justin Verlander to a one-year, $25 million contract. That’s good money for a 38-year-old coming off Tommy John surgery. The Yankees were among a handful of teams linked to the two-time...
MLB・14 DAYS AGO
The Spun

Ever since the New York Yankees’ 2021 season came to a close, the organization made it very clear that it intended on making some big-time offseason moves. When MLB general manager meetings kicked off earlier this month, the Yankees were quickly mentioned as potential trade partners for the Oakland Athletics’ All-Star first baseman Matt Olson.
MLB・16 DAYS AGO
Empire Sports Media

If the New York Yankees didn’t make a single move this off-season, they still have enough talent on the roster to be a competitive team. Unfortunately, some of their critical role players this past year struggled offensively, putting too much weight on the shoulders of the bullpen and starting rotation.
MLB・12 DAYS AGO
dodgerblue.com

The Los Angeles Dodgers had Will Smith, Max Muncy, Justin Turner, Corey Seager, Trea Turner, Mookie Betts, Walker Buehler, Max Scherzer, Julio Urias and Kenley Jansen named among the nominees for the 2021 All-MLB Team. This is the third annual recognition for the top players, with winners being announced on...
MLB・22 DAYS AGO

Kyle Schwarber's time with the Boston Red Sox may be coming to an end. The slugger had a mutual option on his contract for the 2022 season that ESPN reported was worth $11.5 million with a $3 million buyout, but he declined his option on Thursday. However, he could still...
MLB・27 DAYS AGO
NECN

Mark Berman, of Fox 26 Houston, got an inside scoop on who has reached out to Carlos Correa and his agent. According to Berman, Correa’s agent has heard from the New York Yankees, Boston Red Sox, Los Angeles Dodgers, Chicago Cubs, and the Atlanta Braves. It would make sense for...
MLB・1 DAY AGO
WFAN Sports Radio

The Mets have reportedly discussed Gary Sanchez as an option should the Yankees decide not to tender the polarizing catcher a contract by Tuesday night.
MLB・2 DAYS AGO