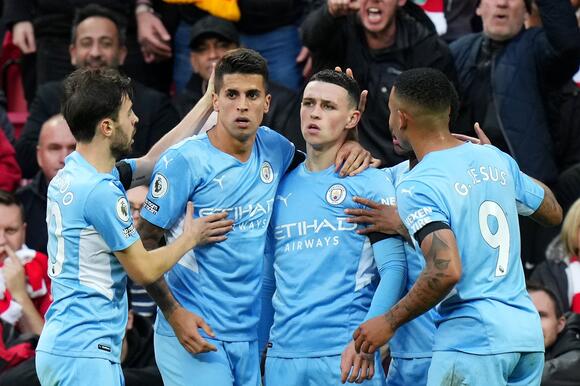 Liverpool and Manchester City played out a thrilling 2-2 draw at Anfield as a rollercoaster second half produced all four goals. Here’s how the players rated:

Alisson Becker, 6: A poor first-half clearance gifted the ball to Bernardo Silva, but made amends a few minutes later with a good save from Phil Foden, and again when he rushed out and tackled at Foden’s feet. Couldn’t do much with either goal.

James Milner, 4: Standing in for Trent Alexander-Arnold and struggled throughout the game. Booked for taking out Foden, almost gave away a penalty, and then should have been sent off for a second yellow-card challenge. A mismatch in terms of pace but did what he could.

Joel Matip, 6: Unfortunate that De Bruyne’s goal cannoned of his midriff and into the net.

Virgil van Dijk, 7: Commanding whenever he needed to be, with moments of real dominance in duels against Kyle Walker and Raheem Sterling in particular.

Andrew Robertson, 7: His energy got the fans going during a lull and constantly worked hard for his team.

Jordan Henderson, 5: Gave the ball away on a couple of occasions in the first half and a silly offside. Not in his best moment.

Fabinho, 5: The defensive midfielder Booked for hacking down Bernardo Silva late in the game. Should have scored the winner.

Curtis Jones, 6: A muted but hard-working performance from the midfielder.

Mohamed Salah, 9: After a quiet first half, a sensational second. Exquisite assist for Mane and an even better goal. Arguably in the best form of his career. 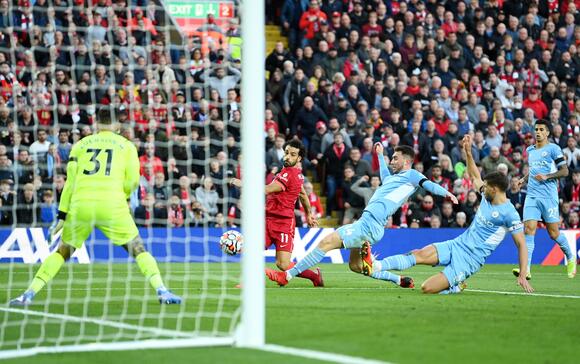 Diogo Jota, 6: Didn’t quite get into the game, although one fierce shot brought a good save from Ederson.

Sadio Mane, 7: Some sharp runs and a well-taken finish.

Ederson 6: One incredible throughball to Foden, but did very little of note in terms of traditional goalkeeping duties, with both goals difficult to stop. Had a nightmare coming for a cross near the end which should have been punished by Fabinho with the goal gaping.

Ruben Dias, 5: Booked for hauling down Diogo Jota and wasn’t quite at his all-conquering best.

Aymeric Laporte, 5: Had a relatively trouble-free first half, a busier second, and failed to stop the electric Salah.

Joao Cancelo, 4: An attempted Cruyff-turn tackle on Salah was lazy and was the catalyst for Liverpool’s opening goal. Booked in the second half.

Kevin De Bruyne, 6: Constantly busy but looked a little rusty, perhaps the understandable consequence of some time out of the team with injury.

Bernardo Silva, 8: One sensational dribble in the first half was Messi-esque, and would have been one of the great Premier League assists had Foden found the finish. Having a brilliant season.

Gabriel Jesus, 7: Worked hard on that right wing and his efforts finally brought reward with the assist for City’s equaliser.

Phil Foden, 9: A brilliant performance. A well-taken goal and could have had more had it not been for the exploits of Alisson Becker. Jack Grealish, 5: Doesn’t seem to carry quite the same confident swagger on the ball as he did wearing an Aston Villa shirt. Replaced by Raheem Sterling on the hour.

Liverpool striker Mohamed Salah eased the tension as fans invaded the pitch during Egypt's 2-2 draw in Angola on Friday night. In the dying embers of the World Cup qualifier, supporters made it onto the field and headed straight toward the Liverpool forward. Salah showed his class by hugging the...
PREMIER LEAGUE・14 DAYS AGO
LFCTransferRoom

Report: Liverpool Set To Complete The Signing Of Porto And Colombia Forward Luis Diaz As Mohamed Salah And Sadio Mane Both Going To AFCON

According to reports, Porto's Luis Diaz is looking more than likely to be a Liverpool player in January as Liverpool are preparing for the loss of Mohamed Salah and Sadio Mane to AFCON. Luis Diaz has been on sensational for for Porto this season with 9 goals and 2 assists...
PREMIER LEAGUE・14 DAYS AGO
CityXtra

England's drubbing of Albania was the main event of Friday's action, where all five Manchester City players contributed to a 5-0 win. Riyad Mahrez also saw some action for Algeria, whilst Zack Steffen was part of a USA squad that took on Mexico. Here's everything that happened across Friday evening...
PREMIER LEAGUE・14 DAYS AGO
goal.com

The 29-year-old Pharaoh beat a host of players to the gong after his superb exploits helped the Reds. Liverpool striker Mohamed Salah has been named the best Premier League player for the month of October. The 29-year-old Egypt international enjoyed a good run during the month which saw him record...
PREMIER LEAGUE・14 DAYS AGO

Here is our round up of Friday's action from the World Cup qualifiers which saw good performances from Alisson, Mohamed Salah and Jordan Henderson. Alisson/Fabinho (clean sheet) There was a confidence boosting clean sheet for Liverpool goalkeeper Alisson as Brazil ran out 1-0 winners against Colombia in Rio. Liverpool's number...
PREMIER LEAGUE・14 DAYS AGO
SB Nation

Mohamed Salah has been named the Premier League Player of the Month for October 2021. In doing so, he beat Ben Chilwell, Maxwell Cornet, Phil Foden, Valentino Livramento, Aaron Ramsdale, Declan Rice and Youri Tielemans who were also shortlisted. Surprisingly this is the first time this season that he is...
PREMIER LEAGUE・14 DAYS AGO
CityXtra

The 26-year-old has fallen out of favour at the Etihad Stadium despite starring for England at the European Championships, where he registered three goals and an assist in the Three Lions' run to the final. With less than two years left on his existing contract, Sterling has been heavily linked...
PREMIER LEAGUE・13 DAYS AGO
Yardbarker

Pep Guardiola's switch to a false nine system has been hugely beneficial for Manchester City in the past two seasons. Last campaign, with a revolving door of personnel in that area, the Blues dominated the Premier League and went on to win the title for the third time in four years.
PREMIER LEAGUE・13 DAYS AGO

Wolves have concern over the long-term future of Hee-chan Hwang. The Mirror says Wolves are trying to turn RB Leipzig striker Hwang's loan move into a permanent deal in January amid interest from Liverpool and Manchester City. Hwang has made an impressive start to life in the Premier League after...
PREMIER LEAGUE・13 DAYS AGO
LFCTransferRoom

Barcelona's new manager Xavi has told the club to get a deal done for Liverpool's Egyptian superstar Mohamed Salah. The 29 year old is widely recognised as the best player on the planet currently after starting the new season on fire. Salah has scored 15 goals in all competitions taking...
PREMIER LEAGUE・13 DAYS AGO
AFP

Manchester City beat Paris Saint-Germain 2-1 on Wednesday but both clubs qualified for the last 16 of the Champions League, along with Real Madrid, Inter Milan and Sporting Lisbon. Gabriel Jesus tapped in from Bernardo Silva's deft knockdown on 76 minutes to settle an absorbing match at the Etihad after Raheem Sterling had cancelled out Kylian Mbappe's goal. Before Jesus sent the crowd wild in Manchester, Neymar shot wide to blow a golden chance to put the Parisians ahead. Lionel Messi had a low-key game and Sergio Ramos, named among the substitutes, was not called on to make his PSG debut.
PREMIER LEAGUE・2 DAYS AGO
fourfourtwo.com

Liverpool ace Mohamed Salah is wanted by Barcelona, according to reports, with new boss Xavi and president Joan Laporta seeing the Egyptian king as the ideal marquee buy. El Nacional in Catalonia have claimed that Xavi sees Salah as the answer to his prayers as the right-wing option that Barca have been lacking - and though there isn't much cash to be splashed, he could still get his way.
PREMIER LEAGUE・10 DAYS AGO

Mohamed Salah Mobbed By Gabon Players Asking For His Shirt

Mohamed Salah has been dubbed as the best player in the world right now, and his Liverpool performances have captivated fans across the world. But it is not just the fans who have been in awe of Salah's performances, with his peers also revelling in the 'Egyptian King's' mere presence on the pitch.
PREMIER LEAGUE・9 DAYS AGO
Yardbarker

Raheem Sterling became the most expensive English player of all time when he joined Manchester City from Liverpool in 2015 for a fee that could reach £49 million. He has so far repaid that price with 116 goals in 307 appearances for the club, winning eight major trophies at the Etihad Stadium.
PREMIER LEAGUE・10 DAYS AGO
LFCTransferRoom

Liverpool superstar Mohamed Salah has announced on Twitter that he will be donating the shirt he wore in Liverpool's 5-0 demolition of Manchester United to an animal charity in Egypt for auction. It was an unbelievable afternoon at Old Trafford in October which saw Jurgen Klopp's men take apart a...
PETS・8 DAYS AGO
LFCTransferRoom

FSG Fail Jurgen Klopp Once Again As Liverpool Are Unlikely To Buy In January Despite Mohamed Salah, Sadio Mane And Naby Keita Off To AFCON

Liverpool look unlikely to add to the injury hit squad in January despite Mohamed Salah, Sadio Mane and Naby Keita leaving for AFCON, which will be another let down by FSG. Let's be honest, Jurgen Klopp has worked miracles to not only assemble the team he has but also to be successful with the backing he has had since joining the Reds.
PREMIER LEAGUE・7 DAYS AGO
goal.com

Arsenal have a plan to stop Liverpool star Salah – Arteta

The two-time African Footballer of the Year is the leading top scorer in the English top-flight and poses a threat to the Gunners' defence. Arsenal boss Mikel Arteta revealed that they have worked out a plan to minimise Liverpool’s attacking threat which includes Mohamed Salah in Saturday’s Premier League match.
PREMIER LEAGUE・7 DAYS AGO
LFCTransferRoom

The last international break of 2021 has, finally, ended, with the return of club football. The break wasn't entirely harmless for Liverpool, with Jordan Henderson and Andrew Robertson picking up knocks and Neco Williams returning with some muscle tightness. Team News featured the reappearance of Kostas Tsimikas, who last played...
PREMIER LEAGUE・6 DAYS AGO
The Independent

Liverpool returned to winning ways in emphatic fashion as they put Arsenal to the sword with a 4-0 victory which halted the Gunners’ 10-match unbeaten run.Having seen their unbeaten start to the season ended at West Ham before the international break, Jurgen Klopp’s side responded in style with a comprehensive dismantling of their opponents, who had arrived looking to leapfrog their hosts into the top four.But for all Arsenal’s recent improvement Liverpool’s quality shone through as they eased back into second place, four points behind Chelsea, after a 15th consecutive game in which they scored more than twice – the...
PREMIER LEAGUE・6 DAYS AGO
firstsportz.com

One of Arsenal’s biggest nightmares came through in their exhilarating contest of football against Liverpool at Anfield. What was expected to be an equally dominated encounter was single handedly controlled by Liverpool. As the match kicked off, both the teams went hunting for the ball but the possession was equally...
PREMIER LEAGUE・6 DAYS AGO