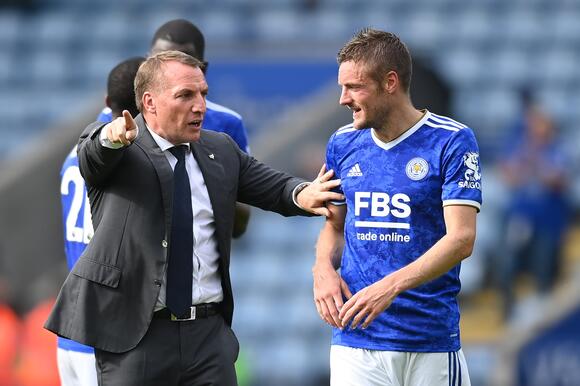 Leicester City and Crystal Palace will look to boost middling starts to the Premier League season as they play one another at Selhurst Park.

Crystal Palace host their East Midlands visitors just six days on from relinquishing two points late on against Brighton having seemingly been set to secure all three.

They have just one win under new manager Patrick Vieira but will be eyeing a second at home against a side having their own difficulties so far.

Jamie Vardy’s double secured Leicester a point against Burnley last time out but Brendan Rodgers ’ side have so far seemed a step below the level that saw them miss out on a Champions League place by a single point in the 2021-22 season.

Here’s everything you need to know ahead of the Premier League fixture:

The match will kick-off at 2pm BST on Sunday 3 October at Selhurst Park.

The match will be shown live on Sky Sports ’ Main Event and Premier League channels, with coverage on the latter beginning at 1pm.

Subscribers can watch the game via the website or Sky Go app, or, if you aren’t a Sky customer, you can grab a NOWTV Day Pass here to watch without a subscription.

Crystal Palace’s two long-term absentees are Nathan Ferguson and Eberechi Eze, with neither likely to be back before late November. Vieira could look to include Cheikhou Kouyate in midfield but otherwise may pick an unchanged team.

Jonny Evans did not travel to Poland due to an illness but is apparently over a troublesome foot injury, and may start. Kelechi Iheanacho has had an eventful week after an immigration snafu prevented him from taking part in the Legia Warsaw game in which Rodgers rested much of his first-choice side. James Maddison’s exclusion from that game could be indicative and the creative midfielder might just return having been benched against Burnley.

A reasonably tough fixture to forecast with both sides generally struggling for rhythm, and it could go either way at Selhurst Park — a draw, then. Crystal Palace 1-1 Leicester

Clockwatch: There were wins for Arsenal, Liverpool and Aston Villa, while Norwich and Wolves play out scoreless draw at Carrow Road
PREMIER LEAGUE・3 HOURS AGO
The Independent

Steven Gerrard got the better of Patrick Vieira in the battle of the Premier League greats after goals from Matt Targett and John McGinn secured a 2-1 win for Aston Villa at Crystal PalaceTwo of the finest midfielders of their generation went head-to-head on the touchline for the first time in a competitive match and it was Gerrard who was able to celebrate a second consecutive victory since he left Rangers for the West Midlands club.An early goal by Targett put Villa in the ascendency and McGinn wrapped up a deserved three points late on before Marc Guehi netted a...
PREMIER LEAGUE・3 HOURS AGO
AFP

Manchester City beat Paris Saint-Germain 2-1 on Wednesday but both clubs qualified for the last 16 of the Champions League, along with Real Madrid, Inter Milan and Sporting Lisbon. Gabriel Jesus tapped in from Bernardo Silva's deft knockdown on 76 minutes to settle an absorbing match at the Etihad after Raheem Sterling had cancelled out Kylian Mbappe's goal. Before Jesus sent the crowd wild in Manchester, Neymar shot wide to blow a golden chance to put the Parisians ahead. Lionel Messi had a low-key game and Sergio Ramos, named among the substitutes, was not called on to make his PSG debut.
PREMIER LEAGUE・2 DAYS AGO
NJ.com

Liverpool, led by forward Mohamed Salah, faces Arsenal in an English Premier League match at Anfield in Liverpool, England, on Saturday, November 20, 2021 (11/20/21). Fans without cable can watch the match for free via a trial of fuboTV. Here’s what you need to know:. What: English Premier League. Who:...
PREMIER LEAGUE・7 DAYS AGO

Manchester United, led by Portuguese forward Cristiano Ronaldo, faces Watford in an English Premier League match at Vicarage Road in Watford, England, on Saturday, October 16, 2021 (10/16/21). Fans can watch the match exclusively with Peacock. Here’s what you need to know:. What: English Premier League. Who: Watford vs. Manchester...
PREMIER LEAGUE・7 DAYS AGO
NJ.com

Leicester City, led by striker Jamie Vardy, faces Chelsea in an English Premier League match on Saturday, November 20, 2021 (11/20/21) at King Power Stadium in Leicester, England. Fans without cable can watch the match for free via a trial of fuboTV. Here’s what you need to know:. What: English...
PREMIER LEAGUE・7 DAYS AGO
NJ.com

Tottenham, led by French goalkeeper Hugo Lloris, faces Leeds United in an English Premier League match on Sunday, November 21, 2021 (11/21/21) at Tottenham Hotspur Stadium in London, England. Fans without cable can watch the match for free via a trial of fuboTV. Here’s what you need to know:. What:...
PREMIER LEAGUE・6 DAYS AGO
CBS Sports

The top two sides in Champions League Group H face off at Stamford Bridge on Tuesday in what looks to be an intriguing clash (on Paramount+) for Chelsea in particular. Do the reigning European champions play it safe and guarantee themselves the point that will see them reach the knockout stages or do they gamble for all three in the hope of knocking Juventus off the top spot?
UEFA・5 DAYS AGO

Manchester City will have something to prove tonight when they play PSG for the second time in this season's UEFA Champions League Group Stage. The reverse fixture ended in a loss for the English team away in Paris. Pep's men will be looking to set the record straight at home as Mauricio Pochettino arrives in Manchester. Make sure you know how to watch a Manchester City vs PSG live stream today from anywhere the world.
UEFA・4 DAYS AGO
The Guardian

Celtic’s hopes of progressing in the Europa League were dashed in agonising fashion as a late fightback from Bayer Leverkusen denied them a famous victory in Germany. Ange Postecoglou’s spirited side knew they would probably require a win to keep their last-32 dream alive and they were on course for this outcome until the closing stages after a Josip Juranovic penalty and a strike from Jota cancelled out Robert Andrich’s early goal for the hosts.
UEFA・2 DAYS AGO
The Independent

West Ham waltzed into the last 16 of the Europa League with a game to spare after a 2-0 victory at Rapid Vienna.First-half goals from Andriy Yarmolenko and Mark Noble wrapped up top spot in Group H for David Moyes’ side.It was an important victory for the Hammers as they are now straight through to the knockout stage having avoided a play-off in February against a team dropping down from the Champions League.Moyes was even able to make eight changes to his side, resting the likes of Declan Rice and Michail Antonio, and still comfortably get the job done.With Vienna...
UEFA・2 DAYS AGO

Sheffield United are set to announce the departure of manager Slavisa Jokanovic after just six months in the role, the PA news agency understands.The Blades, relegated from the Premier League last season, sit 16th in the Sky Bet Championship table and Jokanovic’s exit is expected to be confirmed on Thursday.Jokanovic, 53, became the Blades’ first overseas manager in May when installed as Chris Wilder’s permanent replacement.The Serbian won promotion to the top flight with his previous English clubs Watford and Fulham, but has won only six of his 19 league games since taking over at Bramall Lane.The Blades won their...
PREMIER LEAGUE・2 DAYS AGO
The Guardian

West Ham, Leicester and Rangers all secured victories but Celtic went out of the Europa League
PREMIER LEAGUE・1 DAY AGO
The Independent

David Moyes celebrated a job well done after West Ham waltzed into the last 16 of the Europa League with a game to spare by beating Rapid Vienna 2-0.First-half goals from Andriy Yarmolenko and Mark Noble in Austria wrapped up top spot in Group H for Moyes’ side.The Hammers go straight through to the knockout stage having avoided a play-off in February against a team dropping down from the Champions League.“Job done, yeah,” said Moyes. “We did a professional job tonight and throughout the group stage we’ve done a good job.“It’s great credit to the players for the way they...
SOCCER・1 DAY AGO
The Independent

Imposing a transfer levy on Premier League clubs to further support the football pyramid risks “killing the golden goose”, according to Aston Villa chief executive Christian Purslow The fan-led review of football governance, among other recommendations, proposed a “stamp duty” of up to 10 per cent on deals between top-flight clubs or signings from overseas to help safeguard the financial stability of the lower divisions.The Premier League broadly welcomed the review and will examine all the proposals moving forward – but also issued a warning over any wide-sweeping reforms which ultimately damage the game’s standing.The PL welcomes the publication of...
PREMIER LEAGUE・2 DAYS AGO
The Independent

Antonio Conte said he is not a “magician” after the size of his task at Tottenham Hotspur was laid bare by Thursday night’s Europa Conference League embarrassment.Spurs, Champions League finalists two-and-a-half years ago, were beaten by Slovenian minnows NK Mura – the lowest ranked club in the third-tier European competition who were only formed in 2012 and had lost all four of their previous games.Here, we take a look at some of the tricks he has to pull off to turn Tottenham into a force.Can he get some players to produce a disappearing act in the January transfer window?Conte could...
PREMIER LEAGUE・1 DAY AGO
San Diego Union-Tribune

Eddie Howe will be in the Newcastle United dugout for the first time when they head for Arsenal on Saturday after recovering from his bout of Covid-19.The 43-year-old, who tested positive for coronavirus on the eve of his first game in charge against Brentford, returned a negative test on Friday morning.He will be allowed to resume his role as the Magpies’ new head coach with his symptoms having been traced back to earlier last week.Assistant Jason Tindall has revealed his long-time friend was unwell at the beginning of this week, but has improved significantly since.Tindall said: “You’re always worried when...
SOCCER・1 DAY AGO