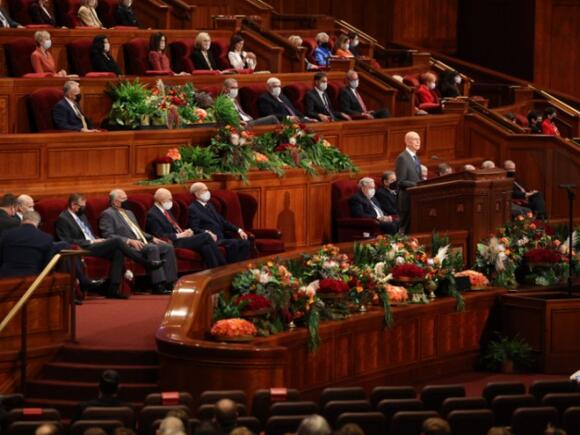 The fourth straight all-virtual General Conference of The Church of Jesus Christ of Latter-day Saints started Saturday with President Russell M. Nelson noting that the world is “still dealing with the ravages of COVID-19 and its variants.”

“We thank you,” the 97-year-old church leader said, “for following our counsel and the advice of medical experts and government officials in your own communities.”

Nelson, a former heart surgeon , and the faith’s top brass consistently have urged members to be vaccinated against COVID-19, assuring them that the shots have proved “ safe and effective .”

Some Latter-day Saints have pushed back against that call — although vaccination rates did rise briefly in Utah after the church’s latest plea in August. A survey from Public Religion Research Institute this past summer showed that 65% of Latter-day Saints were classified as vaccine acceptors.

Meanwhile, apostle Jeffrey R. Holland gave his first public sermon since his controversial talk at church-owned Brigham Young University in August, encouraging members to “take up the cross of Christ, however demanding it may be, regardless of the issue and regardless of the cost.”

General authority Seventy Erich W. Kopischke offered a deeply personal address about people who face mental health challenges. His remarks were the most extensive at a conference on the subject since Reyna Aburto , second counselor in the women’s Relief Society general presidency, and Holland, tackled the tender topic in 2019 and 2013 , respectively.

On Saturday morning, for the first time since October 2019, a session featured live performances by a scaled-back Tabernacle Choir at Temple Square (music for the three previous conferences came from recordings).

Church leaders, including Nelson , all wore masks while seated. The authorities, also limited in their numbers, delivered their speeches from the familiar Conference Center Auditorium, as opposed to the downtown Salt Lake City facility’s much smaller theater that hosted previous pandemic broadcasts.

The 21,000 seats in the massive meeting hall, however, were mostly empty due to COVID-19, with only several hundred seeing the proceedings in person. Members of the 16.6 million-member global faith tuned in to the sessions via the internet, television or radio.

Henry B. Eyring, Nelson’s second counselor in the governing First Presidency, noted that the choir members had been vaccinated and tested for the virus. Their numbers were greatly reduced to provide social distancing.

A multicultural choir of members from northern Utah sang at the afternoon gathering, followed by a troupe from BYU in the evening session. All these performers also had been vaccinated and tested, and were spaced apart in the Conference Center.

POCATELLO — Idaho’s newest temple of The Church of Jesus Christ of Latter-day Saints has been dedicated. President M. Russell Ballard, acting president of the Quorum of the Twelve Apostles, presided at the dedication of the Pocatello Idaho Temple in three sessions on Sunday. “A temple in The Church of...
IDAHO STATE・14 DAYS AGO
eastidahonews.com

SALT LAKE CITY (KSL.com) — Seventy missionaries are safe after two armed men entered the church meetinghouse where a conference was being held Friday, according to a press release from The Church of Jesus Christ of Latter-day Saints. The missionaries from the Mexico Torreon Mission were attending a zone conference...
SALT LAKE CITY, UT・13 DAYS AGO
midlothianmirror.com

To usher in a joyful season of Thanksgiving and Christmas, The Church of Jesus Christ of Latter-day Saints invites the public to an interfaith musical program, “Share the Light,” on Sunday, Nov. 28, at 6:30 p.m. The one-hour program of live music will be held at the church located at 1019 Big Stone Gap Road in Duncanville.
DUNCANVILLE, TX・4 DAYS AGO
wordonfire.org

What the Catholic Church Is Not, in Four Words

In my discernment that ultimately led to coming into full communion with the Catholic Church, one of my biggest challenges was figuring out just what the Church is. For years as a Protestant, every Sunday I rattled off the same formula that Catholics do: “one, holy, catholic, and apostolic.” I ultimately found some clarity in Lumen Gentium about what these four marks of the Church mean. And I heartily commend paragraphs 811-870 of the Catechism of the Catholic Church, along with Bishop Barron’s chapter “The Church” in his recent book Light from Light.
RELIGION・7 DAYS AGO

Hundreds of volunteers spent their Thanksgiving holiday giving back to the community by delivering meals across the Salt Lake Valley for the Salvation Army.
UTAH STATE・1 DAY AGO
FOX 13 News

It has been about two months since Vivint Arena began requiring people to show proof of vaccination or a negative COVID test to attend events.
SALT LAKE COUNTY, UT・4 DAYS AGO
FOX 13 News

POCATELLO — Idaho’s newest temple of The Church of Jesus Christ of Latter-day Saints has been dedicated. President M. Russell Ballard, acting president of the Quorum of the Twelve Apostles, presided at the dedication of the Pocatello Idaho Temple in three sessions on Sunday. “A temple in The Church of...
IDAHO STATE・14 DAYS AGO