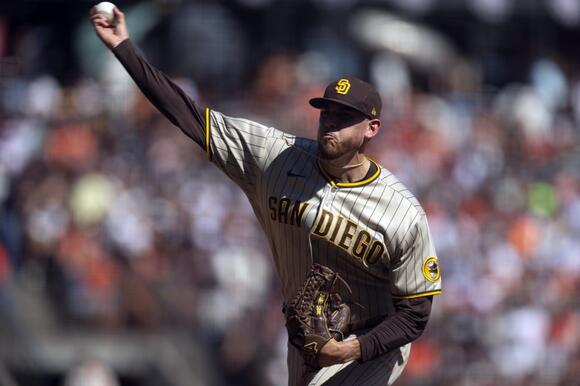 Joe Musgrove came home and had a career year.

The 28-year-old Grossmont High alumnus was the Padres’ only starting pitcher to not go on the injured list this season. The only start he missed was when he instead pitched five perfect innings of relief on May 30 while spelling a taxed bullpen.

“I think I’m most proud of posting up and taking the ball every fifth day,” Musgrove said. “That’s half the battle for winning teams is keeping your guys healthy and staying on the field.”

Half of Musgrove’s 30 starts were quality starts, and he went at least five innings 26 of the 31 times he pitched.

“Just being the guy he’s been all year,” manager Jayce Tingler said of how Musgrove finished. “… So consistent, an absolute warrior throughout the year.”

In addition to throwing the first no-hitter in Padres history on April 9, Musgrove’s return to his hometown saw him yield the seventh-lowest WHIP (1.08) and ninth-lowest batting average (.219) by a Padres pitcher in a 162-game season.

“It was awesome,” he said of pitching in San Diego. “My results speak for how I felt about it. … There’s room for improvement, but it is by far the best I’ve pitched, most consistent I’ve pitched for a full season.”

The Giants may still clinch the National League West on Saturday if the Dodgers lose to the Brewers.

It would be San Francisco’s ninth division title — and their seventh on a day in which they played the Padres.

They just couldn’t do it against the Padres, who came back for a 3-2 victory in 10 innings at Oracle Park on Saturday afternoon.

“It’s nice to delay a celebration in front of you,” Tingler said.

The Giants held leads of 1-0 and 2-1 before the Padres tied the game twice, both on RBIs by Manny Machado. His single in the sixth inning scored Trent Grisham, and his eighth-inning sacrifice fly drove in pinch-runner Javy Guerra.

Jake Cronenworth’s double off Jarlin Garcia in the 10 th scored Victor Caratini, who began the inning on second base. Mark Melancon then retired all three batters he faced in the bottom of the inning to retake the major league lead with his 39th save.

The victory stopped the Padres’ losing streak at seven games. They are 4-17 since Sept. 10 with all four victories coming against the Giants, whose 106-55 record is the best in the major leagues.

It was also just the fourth time the Padres have come back to win a game since Aug. 10, a span of 45 games. They have just 12 wins in that span.

The Padres have acquired Adam Frazier from the Mariners

The Mariners have acquired Adam Frazier from the Padres, MLBTradeRumors.com reports. Frazier was acquired at the trade deadline from the Pirates last season and is once again on the move. The Mariners may have finished second to the Padres in that trade last July as they were hot after Frazier to try and lead their playoff push.
MLB・11 DAYS AGO
madfriars.com

In July, the Padres sent a trio of prospects headlined by infielder/outfielder Tucupita Marcano to the Pittsburgh Pirates for second baseman Adam Frazier, hoping to fuel a run to the playoffs. Four months – and no playoff games – later, the club has sent Frazier to the Seattle Mariners for lefty reliever Ray Kerr and outfielder Corey Rosier.
MLB・10 DAYS AGO
Yardbarker

The Seattle Mariners acquired utility player Adam Frazier from the San Diego Padres in a trade Saturday that will send relief pitcher Ray Kerr and outfielder Corey Rosier to Southern California, the Mariners announced. Frazier, 30, played second base and outfield during his time with the Padres and Pittsburgh Pirates....
MLB・11 DAYS AGO
NBC San Diego

Padres Trade Frazier to Seattle for Pair of Prospects

Shortly before the July trade deadline the Padres sent a trio of young players to Pittsburgh for infielder Adam Frazier, an All-Star who was leading the National League in hits and batting average. Frazier's numbers plummeted in San Diego and with an infield full of guys fighting for playing time...
MLB・11 DAYS AGO

We have a little over 24 hours until Major League Baseball is expected to enter a lockout and the San Diego Padres are making moves. After entering discussions with relievers Luis Garcia and Robert Suarez earlier today, AJ Preller is continuing to make noise. This time it involves adding to San Diego’s catching group by acquiring Jorge Alfaro from the Miami Marlins for a player to be named later or cash.
MLB・7 DAYS AGO
NBC San Diego

The Padres added two of the relievers they sought Wednesday, hours before what will be an apparent shutdown of the business of baseball. Owners are expected to lock out players by the end of the night, when the current collective bargaining agreement expires. The Padres beat that looming deadline with...
MLB・7 DAYS AGO
97.3 The Fan

According to the Athletic’s Dennis Lin, the Padres have hired Ryan Christenson as the team’s new bench coach, a role he occupied for the previous four years in Oakland under Bob Melvin.
MLB・5 DAYS AGO

San Diego Padres need to revamp the bullpen for 2022

If Major League Baseball and the Player’s Association could come to a quick settlement on a new collective bargaining agreement, we might have a memorable hot stove league this winter. In San Diego, the Padres will be active in replacing their closer and adding a late-inning specialist to the mix.
MLB・9 DAYS AGO
KEYT

Suarez guaranteed $11M over 2 years in deal with Padres

SAN DIEGO (AP) — Right-hander Robert Suarez is guaranteed $11 million over two seasons in his contract with the San Diego Padres. Suarez gets a $1 million signing bonus payable by Jan. 15 as part of the deal announced just before the start of Major League Baseball’s lockout. He has a $5 million salary next season, and the deal includes a $5 million player option for 2023 with a $1 million buyout. Teams on Wednesday announced contracts for 34 players that totaled more than $1.47 billion, the highest one-day total in MLB history.
MLB・2 DAYS AGO
gaslampball.com

The San Diego Padres are an appealing suitor for most free agents this winter. They have brought in a player manager in Bob Melvin, who has experiences to lean on to guide the Friars to the postseason. Oh, and they have two of the best players in the game in the middle of their lineup in Fernando Tatis Jr. and Manny Machado.
NFL・8 DAYS AGO
ClutchPoints

The San Diego Padres had a disappointing 79-83 season after battling some injuries in the 2021 season. There is plenty of talent on the Padres roster but there are still improvements that they can make. The Padres are going to be in good hands for the next few years with young superstar Fernando Tatis leading the way.
NFL・14 DAYS AGO

Jorge Alfaro era ends with trade to the Padres

The Marlins acquired Jorge “El Oso” Alfaro from the Phillies with the dream of him filling J.T. Realmuto’s shoes and the expectation of him being at least an average major league starting catcher. Despite some thrilling moments, Alfaro did not fully realize his potential and his three-year Miami tenure ended Tuesday with a trade to the Padres.
MLB・7 DAYS AGO
eastvillagetimes.com

A glimpse at the Padres current rotation

Robert Suarez is a possible closing option for Padres

Could Venezuelan RHP Robert Suarez be an option for the San Diego Padres in the bullpen?. The San Diego Padres will need relief help for the 2022 season. Mark Melancon led all of baseball in saves last year, but the veteran right-hander will likely not return to the Padres. The curveball specialist had a mutual option for the 2022 season at $5-million and chose not to come back at that cost. Melancon will probably get a multiple-year deal on the open market.
MLB・10 DAYS AGO
eastvillagetimes.com

The San Diego Padres beat the clock and signed Robert Suarez to add more depth to the bullpen. Ask, and you shall receive. The San Diego Padres were surprisingly quiet while teams spent money left and right to begin free agency. On Tuesday, the Padres re-signed Tim Hill and Austin Adams while trading for Jorge Alfaro.
MLB・6 DAYS AGO
eastvillagetimes.com

Under the radar offensive options for the 2022 Padres

With the clock ticking heading to the inevitable December 1 MLB lockout, San Diego Padres general manager A.J. Preller was able to complete two necessary goals for his offseason- Acquiring rotation depth and high-velocity options for the backend of his bullpen. While unable to be officially completed due to the...
MLB・1 HOUR AGO
San Diego Union-Tribune

Selections Monday of baseball's Rule 5 draft listed by team, name, position, and team selected from: Triple A Round 1 1.
MLB・4 HOURS AGO
gaslampball.com

Talking Friars Ep. 74: What the Adam Frazier trade means for the Padres

The San Diego Padres announced on Saturday morning that they have traded Adam Frazier to the Seattle Mariners. In return, the Friars are receiving Corey Rosier and Ray Kerr. You can read more about them here. I reacted to this news on the latest edition of the Talking Friars podcast,...
MLB・11 DAYS AGO