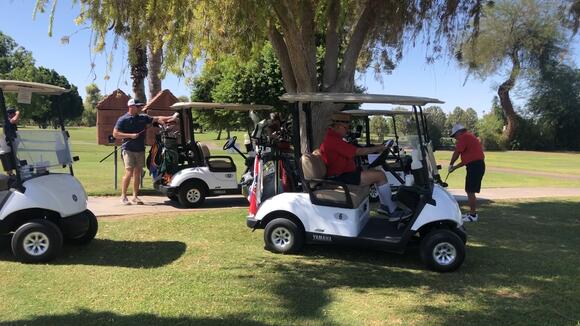 "This association has raised over a million dollars over the years, so there’s been a lot of Yuma residents that have been able to get those scholarships and attend the University of Arizona. So we’re thankful for what they do and, you know, for us it’s just an opportunity to come down here and say thank you for what you’re doing," says University of Arizona Head Softball Coach Mike Candrea.

U of A Director of Athletics Dave Heeke also hit the green, saying he’s excited to be here and support the cause.

"Wonderful place. Incredible program. Proud to be part of a great university and really a winning tradition in our athletics programs," explains University of Arizona Director of Athletics Dave Heeke

While there is plenty to enjoy during the tournament, it's all just part of the bigger picture… helping local students attend U of A.

"Really the goal today is to give out, you know, generous scholarships to deserving young people that can come to our campus and really grow and prosper and enjoy what’s there and be kind of launching into the next chapter of their lives," says Heeke.

Candrea says this tournament is especially dear to his heart, not only because of his love of golf but because there is a scholarship in honor of his late wife called the Sue Candrea Memorial Scholarship.

"It was a really tough time in my life and the alumni association here decided to have a scholarship in her memory, which to me was kind of one of the neatest blessings that you could have is, you know, being able to remember her forever," explains Candrea.

Each year Candrea and his family invite the recipient of the scholarship over for dinner so they know they have a support system.

Candrea was also the head coach of the U.S. Women's National Softball Team in 2004 when team USA won a gold medal and silver in 2008. He is the all-time winningest coach in college softball history. He's set to officially retire in January.

t’s not every day that students gather for a race day, but that’s exactly what’s happening Saturday Dec 3. Over 200 students from six different middle schools will be racing R/C cars. The post R/C car race for middle school students to be held Saturday appeared first on KYMA.
YUMA, AZ・4 DAYS AGO
KYMA News 11

Breakdancing went from underground battles in garages and at parks to actual leagues and is even heading to the 2024 Paris Olympics. Breaking, jamming, and battling… words you definitely want to hear as a breakdancer. The post Yuma local takes home breakdancing trophy appeared first on KYMA.
YUMA, AZ・20 DAYS AGO