Keys To Victory For The Notre Dame Offense vs. Cincinnati 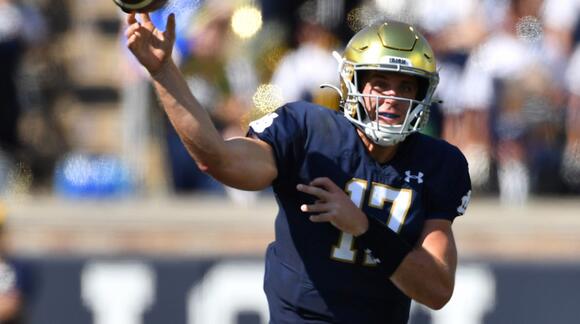 The 9th-ranked Notre Dame Fighting Irish (4-0) host the 7th-ranked Cincinnati Bearcats (3-0) in one of the biggest matchups of a weekend filled with huge matchups.

Notre Dame is a home underdog to Cincinnati, and a big part of that has been a scuffling offense. That unit must get better if Notre Dame is going to win this battle of top ten teams. There are many things Notre Dame must do to thrive on offense, but here are the primary keys to success for the Irish.

1. Start Fast - Notre Dame has scored just 14 first quarter points in its first four games. Against a team like Cincinnati a fast start is a must. Either the defense is keeping Cincinnati's points down and the Irish need to start fast in order to get out to an early lead, or the Irish defense is giving up early points and the offense needs to keep pace until the defense figures it out.

Either way, Notre Dame needs to start fast against the Bearcats and move the ball, score points and force the Cincinnati offense to be in catch up mode all game.

2. Give Jack Coan Time - Notre Dame's offensive line must be physical and play assignment sound football, something it hasn't done all season. If quarterback Jack Coan can get clean pockets the Irish will have plenty of chances to make big plays in the pass game against the Bearcats.

Notre Dame has a lot of weapons in the pass game, and there are several pass game matchups the Irish can win in this contest. Cincinnati is good enough to take away one or two, but not all of them. That was true against Wisconsin, Purdue, Toledo and Florida State.

When Coan has been given time this season he's been very good, and the pass game has been very dangerous. If the line gives him time he needs to hit some of the throws he has missed in recent games.

3. Mix Up The Looks - Offensive coordinator Tommy Rees has become a bit predictable in recent games due to the offensive line struggles. Against Wisconsin, the Irish offense ran the football just two times out of its 11 personnel looks. Every other run was out of 12 personnel, and the Irish rarely throw to their second tight end in those looks, which can limit the pass game.

Going with an extra tight end is one way to try and get the run game going, but that limits the pass game, and the pass game is the strength of this team. Against Cincinnati, Rees needs to mix up the looks more presnap and focus more on the spread formations. He needs to use motions more effectively, be creative with alignments in order to gain advantages or get Cincinnati overreact, which then opens up other opportunities.

Rees needs to keep Cincinnati on its heels and not be as predictable as we've seen the offense become in recent weeks. He needs to get back to being the aggressive play-caller we saw in the first two games, and that begins by him mixing things up.

4. First Down Success Is A Must - I could easily write about getting better on third down or being better in the red zone, but the struggles in those two areas begins with the team being very poor on first down in recent games.

If Notre Dame's offense is going to consistently move the football and generate big plays the offense must be better on first down, which puts it in more situations where it can move the chains and more comfortably take big shots without risk of getting way behind the chains.

5. Spread The Ball Around - Coan has gotten focused a bit too much on throwing to Michael Mayer and Kevin Austin, and Rees' play-calling has done the same thing.

Coan needs to do a better job reading the defense and going to the open receivers and also working though his progressions better. Rees needs to do more things to get players like Braden Lenzy and Chris Tyree more involved on things like screens, jets and reverses.

I'd like to see him start to use Williams more in the pass game, even if that means more empty sets. I'd love to see them actually throw to the second tight end, because the more they ignore that position the easier it is for teams to handle the other pass catchers when there is a second tight end in the game.

News and notes from the Notre Dame players ahead of their matchup against Georgia Tech. Senior Jonathan Doerer has battled through a groin injury for most of the season. Doerer said on Tuesday that he’s just had to do the best he can, which has been pretty good. Doerer has...
NOTRE DAME, IN・13 DAYS AGO
247Sports

Notre Dame QB Jack Coan talks about the improvement of the Notre Dame offense and its depth, with the emergence of Lorenzo Styles and Logan Diggs.
COLLEGE SPORTS・14 DAYS AGO
IrishBreakdown

Out of everything that’s been noteworthy about Irish quarterback Jack Coan’s lone season in South Bend, perhaps what’s most remarkable is how resilient the former Wisconsin signal-caller has been from the start. In the season opener against Florida State, Coan threw for 366 yards and four touchdowns, setting the program...
NOTRE DAME, IN・12 DAYS AGO
IrishBreakdown

OFFENSE - JACK COAN, QUARTERBACK. There wasn't another Notre Dame player that had numbers that come close to what Coan produced. The Irish signal caller passed for 285 yards, his second best performance of the season, and completed 75% of his throws. Coan's performance is why none of the Irish...
NOTRE DAME, IN・9 DAYS AGO

Notre Dame (10-1) continued its hot streak by thorough dismantling Georgia Tech (3-8) en route to a 55-0 victory. It was the most dominant victory over a Power 5 opponent since the Irish beat Rutgers 62-0 in the last home game of Lou Holtz's tenure (1996). Notre Dame made it...
NOTRE DAME, IN・10 DAYS AGO
IrishBreakdown

Notre Dame finished the regular season with an 11-1 record after another convincing November victory, this time with the Irish defense combining with a big-play offense to fuel a 45-14 victory over Stanford. Notre Dame struck first, with Jack Coan hitting Kevin Austin over the middle after a play-action, and...
NOTRE DAME, IN・3 DAYS AGO
IrishBreakdown

Notre Dame (10-1) showed the offense that I've been waiting all season to watch. We saw a great play design, great play calling, spreading the ball around to the multitude of weapons, attacking all parts of the field, using the speed this team has and we saw impressive execution. Georgia...
NOTRE DAME, IN・10 DAYS AGO
USA TODAY Sports Media Group

If you’re a betting person, putting money on Notre Dame backups receiving a lot of playing time against Georgia Tech might be a safe move. All indications are that senior day at Notre Dame Stadium will go as well as it possibly could. The only question appears to be how much the Irish will win by. That’s how confident Irish fans should be after watching the first quarter and seeing their team take a 24-0 lead.
COLLEGE SPORTS・10 DAYS AGO

Notre Dame took a 24-0 lead into halftime over Stanford, a game the Irish have controlled. *** Notre Dame's first series was a clinic. I really liked what we saw from OC Tommy Rees, as Notre Dame never got to third-down on the series. Rees began with a play-action pass that opened up Kevin Austin on the backside, which was aided by the linebackers stepping up to play the run. Once Notre Dame got near the red zone, Rees went 12 personnel (two tight ends), but he threw the ball both times. The touchdown was a well-designed and executed play.
NOTRE DAME, IN・3 DAYS AGO
IrishBreakdown

Notre Dame coach Brian Kelly wasn’t tiptoeing around the subject. After the Irish blew out Stanford 45-14 on Saturday, Kelly made a full-throated case for his team belonging in the College Football Playoff. The Irish were ranked sixth in the poll which came out on Tuesday. Michigan’s 42-27 victory over...
NOTRE DAME, IN・3 DAYS AGO
USA TODAY Sports Media Group

Brian Kelly is yesterday’s news as he’s been greeted at the airport by some of the most hospitable the bayou has to offer, and takes on the task of cleaning up the mess Ed Orgeron left behind. Who from Notre Dame will follow Brian Kelly is the biggest question the...
COLLEGE SPORTS・12 HOURS AGO
WHIO Dayton

COLUMBUS — Backup Ohio State quarterback Jack Miller has been suspended from the football team following an arrest on suspicion of OVI Friday morning in Columbus, according to our news partners at WBNS-TV. >>Victim identified in deadly crash involving ex-Raider Henry Ruggs in Las Vegas. State troopers confirmed to the...
OHIO STATE・25 DAYS AGO

The football world is mourning the loss of a former Baltimore Colts and Ohio State Buckeyes player. Tom Matte, who played collegiately for Ohio State and then starred in Baltimore, passed away earlier this week according to a statement from the Ravens. He was 82 years old. “Tom became an...
NFL・27 DAYS AGO
Sportsnaut

Let's go back to 2019. LSU came to town holding the number 1 ranking in the nation. Alabama looked ready to knock the Tigers off the pedestal. Unfortunately for us, the game ended in the Tigers victorious 46-41. We all felt bad after that loss, but one person certainly was reveling in Tide fans' sorrows.
ALABAMA STATE・27 DAYS AGO
Detroit Sports Nation

According to Michigan head coach Jim Harbaugh, the Big Ten has contacted him and they admitted that “they made a mistake” on the overturned fumble-touchdown during the Wolverines 37-33 loss at Michigan State. Harbaugh said that the Big Ten also admitted that they made mistakes on other plays during that...
MICHIGAN STATE・22 DAYS AGO
Larry Brown Sports

The Ohio State Buckeyes appear to be hitting their stride at the right time, and coach Ryan Day wants his biggest rival to know it. The Buckeyes throttled the Michigan State Spartans 56-7 on Saturday, turning a clash of top ten teams into an uncompetitive blowout. Ohio State jumped out to a 49-0 lead before halftime, and quarterback C.J. Stroud asserted his Heisman Trophy credentials by throwing for 432 yards and six touchdowns.
MICHIGAN STATE・10 DAYS AGO
Newsweek

The Heisman race will likely go down to conference championship weekend and which player shines the brightest in that moment.
COLLEGE SPORTS・14 DAYS AGO