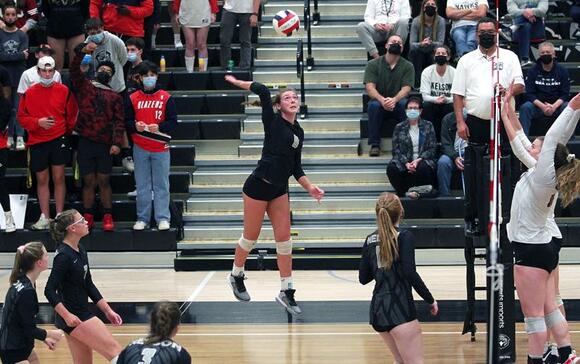 The Hawks are making their first year a keeper, currently challenging for the MHC lead.

They're making some noise over at Nelson.

"They," in this case, are the members of the first-year Nelson volleyball team at the new Happy Valley high school. And as for the noise, the Hawks have practically shouted their arrival in Mt. Hood Conference play, racing out to a 9-1 league record and giving conference-leading Central Catholic a run for its money.

"After the first set, we knew that we needed to force them to take the first timeout and take them out of system. We needed to get … a lead and then just keep going from there," said Nelson junior outside hitter Kali Lukovich, who led her team in kills against Sandy.

"I think (the key was that) we just started playing as a team more, and we trusted each other a lot more and we started working together more than we did at the beginning," said senior setter Ellie Wallace.

With the Hawks' fifth straight win, Nelson improved to 9-1 in MHC play and 11-4 overall. Meanwhile, Sandy lost for the fourth straight time — including a five-setter against Gresham the night before — and fell to 3-7 in conference play and 3-9 overall.

After the match, the Pioneers knew where they'd fallen short against Nelson.

"The first set, we definitely had way more energy than the next two," said Sandy junior middle blocker Sydney Brewster, who led her team in kills. "(After that), we were being selfish, and we weren't playing as a team. We were playing as individuals, and we weren't working together. Then our energy was down because we lost the first set. We didn't take into account that we could still win the (match)."

"I think we wanted to win in the beginning, but then the energy started to go down the more we fell behind," added junior middle blocker Brooke Womack. "I think we are kind of playing as individuals on the court right now — we need to play more as six people as one." 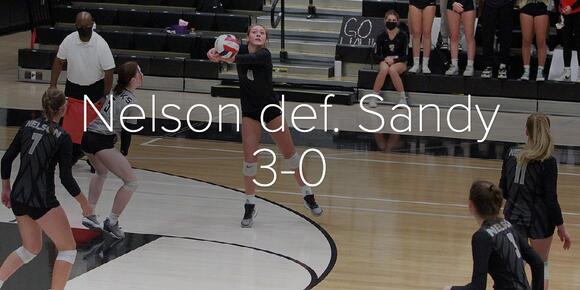 While Nelson took the second and third sets easily, Sandy pushed the Hawks all the way to the end in the first. Indeed, neither team led by more than three points until the final point of the set, with the Pioneers up 10-7 on a three-point run served by senior Brooklyn Starley, and the Hawks ahead 19-16 and 20-17.

Sandy closed within 20-19 on an ace by senior Emma Hall and 22-21 on a crosscourt kill from Womack, but saw Nelson pull away to win on a kill by sophomore Ava Maciag, a Pioneer hitting error and a Lukovich ace. Lukovich had five kills and Maciag four in the first set, while Brewster had three kills and a block.

The Pioneers were close early in the second set, too, but Nelson put together a six-point run to lead 9-3 — getting two aces from senior Avery Bergers — boosted its edge to 14-4 on a Lukovich kill set by Wallace and just kept going.

Nelson finished the set at 25-10 on an ace from sophomore Morgan Armitage. Lukovich added another three kills and an ace in the set, while junior Maddie Abraham had three kills. Brewster had two blocks for Sandy.

The third set provided more of the same, with Nelson coming back from a 6-4 deficit by scoring 14 of the next 20 points to lead 21-10, with Maciag and Lukovich notching three kills each in that stretch while Bergers added two aces.

From there, Lukovich tacked on three more kills and a Sandy hitting error ended the match at 25-13.

"Today was really good," Lukovich said of her connection with Wallace. "We've played together for a long time, so we have that trust and the communication at fixing things."

On their side of the net, the Pioneers knew they just needed to keep their energy up.

"After having three matches in one week (and) … after a five-set game last night, it was just hard to come back," Womack added "We were kind of tired and our energy was low."

Crusaders lead by double digits twice in the second half before Cavs close within one.Seriously, what more could you ask for? On just the second day of the 2021-22 winter season, we got a matchup between two of Oregon's top high school boys basketball teams — Jesuit and Clackamas — big plays, huge momentum swings and, ultimately, a 59-55 non-league win by the Crusaders at Clackamas High School. "I thought the key was defense, coaching and practice, how we go hard in practice and in the game," said Jesuit junior wing Isaiah Crane, who led his team with 21 points...
CLACKAMAS, OR・2 DAYS AGO
Clackamas Review

Despite some challenges, the 2021 fall season of high school sports was awesome.It was a helluva fall season. I know, I know, "helluva" is not a word, but I don't like swearing in print. Nonetheless, the 2021 fall high school sports season — as much of it as I saw anyway — was awesome. Here's why. While we in Oregon are still dealing with indoor mask mandates, social distancing requirements and more, even the most cautious among us has to admit that things are better pandemic-wise now than they were at the start of the fall season. At the end...
3 DAYS AGO
Clackamas Review

West Linn, Wilsonville, Gladstone boys basketball back for more in 2021-22

Check out our previews of the boys basketball teams at 11 Clackamas County high schools. After trying to get the most out of the pandemic-shortened 2021 spring season, high school boys basketball is back and ready for a return to full-length seasons, playoffs and state championships. That is definitely the...
2 DAYS AGO
Clackamas Review

Check out the best of the best here, and link to the complete all-star lists for all fall sports.They are the best. The fastest, the most dangerous, the highest scoring, the toughest — these are your Tri-Valley Conference all-stars for the 2021 fall season. While we cannot publish every one of the various all-league teams in print, they will be published in full on the sports tab of our website, clackamasreview.com. But here's a snapshot of the very best of the very best from Tri-Valley Conference sports for the fall 2021 season.A D V E R T I S I...
SOCCER・5 DAYS AGO
Clackamas Review

Check out the best of the best here, and link to the complete all-star lists for all fall sports.They ran the fastest. They hit the hardest. They scored the most and they won — a lot. These are your Northwest Oregon Conference all-stars for the 2021 fall season. While we cannot publish every one of the various all-league teams in print, you can link to complete lists for each sport below. Here's a snapshot of the very best of the very best from Northwest Oregon Conference sports for the fall 2021 season.A D V E R T I S I...
10 DAYS AGO
Clackamas Review

The Falcons speed past Corvallis 5-0 in the title game at Hillsboro Stadium on Saturday.An unforgettable season for the La Salle boys soccer team ended with a Class 5A state championship Saturday, Nov. 13, as the Falcons earned a 5-0 victory over Corvallis at Hillsboro Stadium. The Falcons ended their season with a record of 16-1-1, while Corvallis finished at 12-4-2. La Salle grabbed a 2-0 lead in the first half off two penalty kick goals by senior Mizael Harris, then added a third PK by Harris and a pair of scores from sophomore Kevin Serrano-Maldonado for the final 5-0 margin. Come back to see full coverage of the game at clackamasreview.com. {loadposition sub-article-01}
21 DAYS AGO

After trailing 7-6, Jesuit football scored late and added a pick-six to eliminate Clackamas from the 6A playoffs. Trailing 7-6, Jesuit High football finally broke through late against Clackamas to take a lead and added on a pick-six to seal the 19-7 win. The win for the No. 9 Crusaders (10-1) sends them to Class 6A quarterfinals where they will play No. 1 Lake Oswego. For Clackamas, its season ends with a 10-2 overall record with the only other loss coming to No. 4 Central Catholic. {loadposition sub-article-01}
21 DAYS AGO
Clackamas Review

Follow the schedule and final scores of the OSAA high school football playoffs.The playoffs in Oregon high school football continue on for all classifications. Head to OSAA's website to see the full brackets from each level and keep an eye here for all the latest scores from across the state. All dates and times are 7 p.m. Nov. 12 unless otherwise noted. CLASS 6A Second round Lake Oswego 35, McNary 14; LO 10-1, McNary 7-4 Jesuit 19, Clackamas 7; Jesuit 10-1, Clackamas 10-2 Sherwood 35, West Salem 27; Sherwood 7-4, West Salem 9-2 Central Catholic 48, Mountainside 17; CC 12-0,...
22 DAYS AGO