The Bobby Bones Show with Bobby, Amy, Lunchbox, Eddie and the whole crew! 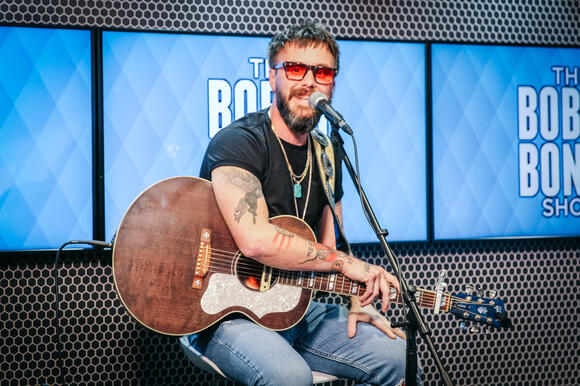 Elvie Shane stopped by The Bobby Bones Show for his first appearance and to share some news on his upcoming project.

Relatively new to country music fans, but Shane has been around the country music industry for a few years now due to a viral hit. About 3 years ago, his song "My Boy" went viral but like most viral things, the virality wore off. However, the song got him a record deal. His song blew up again on TikTok last year. The song was actually inspired by his own life. He met his wife Mandy 10 years ago, she was a waitress and was showing interest in him. They pursued each other and he found out she had a 5-year-old boy. A year later, they got married and he became a stepdad. The song was written with inspiration from this personal story in 2016 about his experiences with being a stepdad. He admitted that it took 4 years since that song went viral for him to write anything else people were interested in. The song started stirring up so much again that he was asked to write a piece of the song where he changed the lyrics from "My Boy" to "My Girl" for stepdads with stepdaughters.

Shane didn't plan to pursue being an artist in country music, because he didn't know he could come to Nashville and make that a career until he was in his 20s. But as Shane puts it, he was no stranger to being around "characters." He says he grew up around a lot of interesting people because his dad is a truck driver. Not to mention his unique name coming from his grandfather, adding that it used to be a popular name back then.

Now he is fully pursuing his career and there are a lot of things in the works for him. He announced with us on the show that he's releasing his debut full length album Backslider on Friday, October 29th. The project features 15 songs, including six previously on his Country Roads EP. The closest song on the record to Shane is called "Miles (With My Mama)." When writing the song, it started out as a tribute to his father and his career as a truck driver. Then the song progressed when Shane experienced some angry feelings towards his father for not being around. The song ended up being about how Shane is actually a lot like his father, especially when it comes to his music career.

Elvie Shane is currently on the road with Brooks & Dunn . He performed his songs "My Boy" and "Miles" on The Bobby Bones Show today, watch his performances below!

Recently described by the BBC as “the band with millions of streams and just two songs”, Wet Leg have announced details of their forthcoming debut album, and shared two new songs set to feature on the 12-track collection. The Isle Of Wight duo, Rhian Teasdale and Hester Chambers, will release...
THEATER & DANCE・1 DAY AGO
The Bobby Bones Show

This is going to be an epic girl's night!
THEATER & DANCE・27 DAYS AGO
The Bobby Bones Show

Some Epic Country Songs We Totally Forgot About

Elvie Shane To Headline ‘My Kinda Trouble Tour’ Next Year

Elvie Shane will kick off his first headlining club tour, called the My Kinda Trouble Tour, on February 17th in Chattanooga, TN. The trek will mark some of Elvie’s first live performances of his debut record Backslider, which was recently released and includes his first Number One hit, “My Boy.” Tickets for the tour will go on sale on Friday (November 19th) at 10 a.m. local time at elvieshane.com.
CHATTANOOGA, TN・14 DAYS AGO

The "My Boy" singer is hitting the road! See the list of tour dates here:
CHATTANOOGA, TN・14 DAYS AGO
themusicuniverse.com

Blur's Dave Rowntree has signed to an indie label for his debut album. The 'Parklife' group's drummer has inked a deal with Cooking Vinyl for his first solo record, which is due out in 2022. The 57-year-old musician-and-composer said in a statement: “As a kid I used to spend hours...
MUSIC・13 DAYS AGO
The Bobby Bones Show

Abby Anderson On Why She Left Her Record Label

Abby Anderson talks about the big change she made with her career and she performed a cover of Adele's latest song.
MUSIC・13 DAYS AGO

This Debut Album Is an ‘Open Investigation’

Doomers, lock up your ’80s starlets, as Sweden’s Endtime have signed on to release their debut album next year through Heavy Psych Sounds. The horror-infused five-piece from Uppsala will begin preorders and offer an initial track stream next week somewhere around the internets — you know the usual haunts by now — but if you’re looking for an early glimpse of what they may or may not be about, there’s a live clip below and a Spotify stream of the 2017 self-titled EP they released under their former moniker, Saturniids.
ROCK MUSIC・13 DAYS AGO
The FADER

Alice Glass will release her first solo album in 2022. The former Crystal Castles member will release Prey//IV on January 28. The album will arrive via her own Eating Glass Records and today's announcement is accompanied by lead single "Baby Teeth." Check out a video for that below alongside the album tracklist, which features the previously shared “I Trusted You” and “Suffer and Swallow.”
MUSIC・12 DAYS AGO
Stereogum

Right now, Santa Cruz’s Scowl are one of the leading lights of an insanely hot Bay Area hardcore scene. This past summer, for instance, the Bay announced the return of live music when Gulch, Drain, Sunami, and Xibalba played to thousands of people on a strip-mall parking lot, taking a stage that the band members built themselves. Scowl opened that show, and their legend has only grown since then. Today, Scowl follow up their 2019 EP Reality After Reality… with How Flowers Grow, their full-length debut. It fucking destroys.
ROCK MUSIC・12 DAYS AGO
studybreaks.com

The duo formed by icons Bruno Mars and Anderson .Paak released a record full of ’70s-inspired bops to their audiences’ absolute delight. On Nov. 12, Silk Sonic, the new R&B-fusion duo formed by Grammy winners Bruno Mars and Anderson .Paak, released their highly anticipated debut album, “An Evening with Silk Sonic.” The album features songs with the characteristic retro catchiness that put hits like “Uptown Funk,” Mars’ best-selling song to date, on the Billboard Hot 100 for 14 straight weeks. Silk Sonic delivers plenty of new ‘70s funk and soul-inspired earworms, as well as some notable music video performances released ahead of the full album.
MUSIC・7 DAYS AGO
GreenwichTime

A selection of rare and unpublished photos of Tupac Shakur at the release party for his debut album are being released as non-fungible tokens. The 18 NFTs are being offered up by hip-hop journalist and photographer Lawrence “Loupy D” Dotson, and they’re being sold on the NFT platform, OpenSea. Seventeen of the 18 NFTs are original photos of Shakur, while the 18th is a “Super NFT” collage comprising the other 17 photos. The NFTs will each come with a framed print of the photo signed by Dotson, and part of the proceeds will be used to plant trees in Tupac’s hometown.
CELEBRITIES・9 DAYS AGO
gratefulweb.com

Paul Bond’s debut album 'Sunset Blues’ is a stunning debut from a young songwriter based in Amsterdam, the Netherlands. Its 7 songs deal with the subject of becoming a father, or rather, the moment one finds out one is about to become a father. Happiness, confusion and existential despair are all thrown into the cocktail that is the human mind. Bond’s university degree in English literature and philosophy helps him to deal with this theme in a profound and unique way; his songwriting has been compared to Jackson Brown and James Taylor, as well as to contemporary folk artists such as Iron & Wine and Fleet Foxes. Literary influences are Ernest Hemingway, F. Scott Fitzgerald and Ezra Pound. For this album Bond collaborated with mastering engineer Ed Brooks, based in Seattle, WA, who has worked with Fleet Foxes in the past. ’Sunset Blues’ will be released on 18 November on the Concerto Records label, the legendary Amsterdam record store, on both 10” vinyl and CD.
MUSIC・15 DAYS AGO
The FADER

Kojey Radical will release debut LP Reason To Smile next year. The U.K. rapper's debut is out March 4 via Asylum/Atlantic and features guest appearances from Kelis, Tiana Major9, Masego, Ego Ella May, Shaé Universe, Cashh, Lex Amor, and more, including Kojey's mother. Producers on the project include Swindle, Cadenza, and Blue Lab Beats. The album includes recent singles "War Outside" and "Gangsta."
CELEBRITIES・7 DAYS AGO
wpr.org

John Prine: The debut album that introduced a songwriting master

On April 7, 2020, John Prine died a victim of the COVID-19 pandemic after a storied career as a singer/songwriter. His first album, John Prine, released in September 1971, marked the beginning of Prine's long musical journey. But Prine's start as a talented songwriter began years before that in Maywood, Illinois.
MUSIC・12 DAYS AGO
buzz-music.com

From Brunei to Uganda, singer-songwriter, guitarist, and versatile recording artist Alifchief takes us on a psychedelic journey with his debut 8-track album, 'nusantarafrika.'. Alifchief is well known for his artistic versatility, incorporating sounds from genres like psychedelic rock, 70s Afrobeat, Lingala, and funk. The electrifying performer has taken the stage at Zanzibar Watersports Festival alongside names like Leo Mkanyia. Now releasing his debut album, ''nusantarafrika,' Alifchief takes us through his Nusantara and African influences while creating a beautiful and psychedelic sonic experience.
MUSIC・9 DAYS AGO
gratefulweb.com

The first-ever blues album from Gov’t Mule, Heavy Load Blues, has officially debuted at #1 on the Billboard Blues Albums chart, marking the renowned quartet’s third album in their storied career to enter the Billboard charts at the top spot. Following an incredible first week, Heavy Load Blues (released November 12 via Fantasy Records) also lands on the following Billboard charts: #6 Tastemakers Albums, #16 Top Current Album Sales, #22 Top Rock Albums, #25 Top Album Sales, and #27 Independent Albums in addition to debuting on the Billboard 200. The album also reached #1 on the Amazon Best Sellers in Blues chart and #1 on Music Connect’s Blues Albums chart as well as #2 on the Apple Music Blues Albums chart and #3 on the Music Connect Current Rock chart. Internationally, Heavy Load Blues has also found charting success, debuting at #16 in Germany, #33 in Switzerland, #48 in the UK and top 100 entries in Italy and the Netherlands.
MUSIC・8 DAYS AGO
Spin

Build a better mousetrap and the world will beat a path to your door. But that turned into a bit of a problem when, at age 16, Colorado-based guitarist/vocalist Demi Demitro came up with the novel concept of backing herself with — not one — but two drummers in a bluesy garage trio she dubbed The Velveteers. It’s taken the band six years to finally release its reverb-soaked debut, Nightmare Daydream, on Easy Eye Sound, the label of Grammy-winning Black Keys anchor Dan Auerbach. It was produced (and partially co-written) by Auerbach in his Nashville studio, as well. But not all mousetrap enthusiasts had such honorable intentions.
MUSIC・2 DAYS AGO

The Bobby Bones Show with Bobby, Amy, Lunchbox, Eddie and the whole crew!