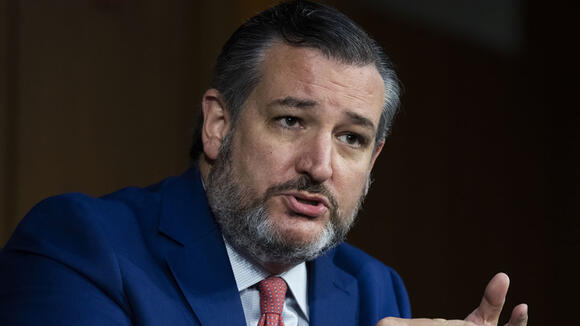 He tweeted Wednesday that he "stands with" Andrew Wiggins and the league's other unvaccinated players.

Senator Cruz himself is vaccinated.

In the same Twitter thread, he called out Lebron James to boycott any games played in arenas that ban unvaccinated players, which would include San Francisco's Chase Center.

Earlier this week, Warriors forward Andrew Wiggins declined to discuss whether he remains unvaccinated, but it certainly sounded like that was the case.

Wiggins said during the team's media day Monday that he will continue to stand by his beliefs when it comes to not receiving a coronavirus vaccine.

Wiggins declined to explain what those beliefs actually entail, saying, "It's none of your business, that's what it comes down to."

He faces the possibility of not being allowed into Golden State's home building at Chase Center for games come Oct. 13 when the San Francisco Department of Public Health begins requiring proof of vaccination for large indoor events.

He is unbelievable and has no morals ! How quickly his constituents forget he abandoned for a vacation well they were freezing to death and didn't care!

If Ted Cruz and Rand Paul were hanging by their fingernails from a thousand foot cliff and I could only save one I'd have to wonder what type of sandwich I want and go get it.

Bottom line just like a typical Republican that thinks he's white now he's trying to divide the African Americans. Cruz taking a play right out of Trumps playbook and that's divide when even the Cubans want nothing to do with him.

During the Los Angeles Lakers’ Wednesday win over the Indiana Pacers, LeBron James asked to have two fans sitting courtside at Gainbridge Fieldhouse escorted out. Turns out the fans were taunting James in a malevolent way. The four-time MVP may be one of the world’s most popular athletes, but he...
NBA・2 DAYS AGO
ClutchPoints

Boston Celtics big man Enes Kanter recently made headlines after he went on an all-out attack on Los Angeles Lakers superstar LeBron James and his alleged ties to China. Unsurprisingly, Kanter has United States Senator Ted Cruz backing him in his corner as the outspoken Republican also went on an unfiltered tirade against LeBron.
NBA・6 DAYS AGO
firstsportz.com

While the NBA Players are known to work their way in the gym, day-in and day-out, they are also known for dawning the most outrageous style and Kyle Kuzma’s pre-game outfit in Washington Wizards latest game against the Charlotte Hornets only goes to justify the same. As a result, of which many NBA stars also commented upon the same.
NBA・4 DAYS AGO
fadeawayworld.net

Skip Bayless Reacts To LeBron James Ejecting Courtside Fans: "When LeBron Gets That Mean Mug Going, You're In Some Big Trouble."

If there's one thing FOX Sports analyst Skip Bayless is known for, it's his harsh criticisms against LeBron James. Over the past few years, Skip has called out LBJ for various reasons, some more ridiculous than others. But, on Thursday, Bayless actually gave LeBron some praise for how he handled...
NBA・1 DAY AGO

LeBron James has been out of action for the Los Angeles Lakers for two weeks now and despite some fear that the four-time NBA champ could be sidelined for up to two months due to an abdominal strain, recent reports suggest that he’s closing in on a return. LA’s next game will be a marquee matchup against Giannis Antetokounmpo and the reigning champions Milwaukee Bucks, and it looks like there’s a small chance LeBron could actually suit up in that one.
NBA・11 DAYS AGO
fadeawayworld.net

LeBron James was recently involved in a highly publicized incident during the recent Lakers-Pistons game. Tensions ran high, and there is no question that this was something uncharacteristic for an NBA game. The incident started when LeBron James inadvertently hit Pistons center Isaiah Stewart, which led to a huge mid-game...
NBA・5 DAYS AGO
fadeawayworld.net

NBA Fans React To LeBron James 'Cojones' Celebration: 'He About To Miss Another Game For That'

LeBron James returned from his one-game suspension in a great mode, dropping nearly 40 points on the Indiana Pacers, taking the Lakers to a much-needed win over the Eastern Conference team. In yet another night full of controversy for The King, as two courtside fans heckled him and made some...
NBA・2 DAYS AGO
CBS Sports

Luke Walton's firing was almost inevitable. The Sacramento Kings have missed the playoffs 15 years in a row and is now on their 11th coach in that span. Monte McNair didn't hire Walton, but he oversaw many of Walton's failures both tactically and within his locker room. He was the obvious first NBA coach to be fired of the 2021-22 season.
NBA・5 DAYS AGO

Detroit Pistons center Isaiah Stewart returned from his two-game suspension on Friday after his confrontation with LeBron James. That also gave Stewart the opportunity to discuss the wild scene for the first time. Stewart was struck in the mouth by James while the two were competing for a rebound during...
NBA・1 DAY AGO
Lakers Daily

LeBron James has a lot on his plate. As he juggles with leading a Lakers team to the postseason, he also has the responsibility of being a role model for fans all around the world. As, perhaps, one of the biggest and well-known athletes in existence, everything the guy does...
NBA・5 DAYS AGO
The Spun

ESPN insider Adrian Wojnarowski had significant news to share with the NBA world this Tuesday. There’s reportedly growing optimism that LeBron James could return to the Lakers‘ starting lineup this Friday against the Celtics. James has been out since Nov. 2 due to an abdominal strain. With a five-game road...
NBA・11 DAYS AGO

Last week, Detroit Pistons F Isaiah Stewart made national news when he was hit in the face and bloodied by LeBron James. After realizing he has been cut wide open, Stewart tried multiple time to get at James but, thankfully, he was held back. On the day after the game,...
NBA・1 DAY AGO
The Spun

It looks like Lakers star Anthony Davis won’t take the floor against the Pacers on Wednesday night. Per Los Angeles Lakers reporter Harrison Faigen, coach Frank Vogel says Davis is “likely out” with a fever. “Frank Vogel says LeBron will play. AD is most likely out,” Faigen tweeted. “His fever...
NBA・3 DAYS AGO
CBS Sports

After being selected No. 1 overall in this past July's draft, Detroit Pistons rookie Cade Cunningham has had a shaky start to his NBA career. That's within the proper context. He missed the first four games of the season getting over a sprained ankle and he's only played in eight games so far. He's going to be really good.
NBA・11 DAYS AGO
Lakers Daily

The Los Angeles Lakers have been without superstar LeBron James for a good chunk of time, but it sounds like that could be changing soon. There is reportedly “optimism” that the 17-time All-Star could return to game action on Friday for the Lakers’ matchup with the Boston Celtics. L.A. could...
NBA・11 DAYS AGO

Dave McMenamin: LeBron James is officially listed as out for Wednesday’s game in Milwaukee with his abdominal strain, per the Lakers. It will be his eighth straight missed game and 10th missed game overall this season. As @Adrian Wojnarowski reported, it’s possible James will return to the court Fri in BOS.
NBA・11 DAYS AGO
NECN

NBA Rumors: LeBron James May Return From Injury Vs. Celtics

Report: LeBron could return from lengthy injury absence vs. Celtics originally appeared on NBC Sports Boston. LeBron James already has missed nine of the Los Angeles Lakers' 15 games this season, but it appears he doesn't want to miss a matchup with the Boston Celtics. There's "growing optimism" that James...
NBA・11 DAYS AGO
Los Angeles Times

10 Best NBA Players Who Have Worn The No. 23: Michael Jordan And LeBron James Made History Wearing That Jersey

The #23 jersey might be the most popular jersey in NBA history. It was the number that was worn by some of the greatest players ever, most famously by Michael Jordan and LeBron James. Looking back at NBA history, there have been many more players that have worn the famous jersey number on their backs. But do they come close to how great Jordan and James were as superstars?
NBA・8 DAYS AGO