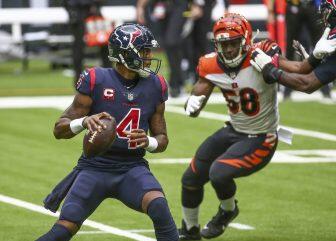 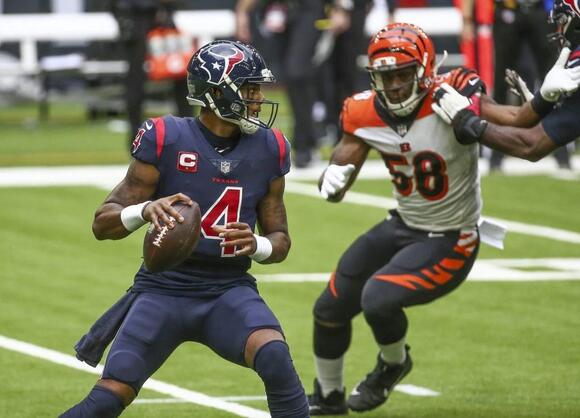 Thus far, the first three games of his sophomore campaign has been up and down for Philadelphia Eagles quarterback Jalen Hurts .

The former second-round pick from Oklahoma is completing 66% of his passes for 780 yards with six total touchdowns and two interceptions. Unfortunately, Philadelphia ranks in the bottom 10 of the NFL in points scored and has lost two consecutive heading into this week’s outing against the favored Kansas City Chiefs .

Enter into the equation a real possibility that Hurts might not be long in Philadelphia. According to Chris Simms of NBC Sports, Eagles owner Jeffrey Lurie has given general manager Howie Roseman and the go-ahead to trade for embattled Houston Texans Pro Bowler Deshaun Watson .

“Philadelphia is in that mix for the Deshaun Watson thing,” Simms said . “That’s a real thing. From everything I know, the owner has given them the green light as far as Howie Roseman and company to make that deal if it’s right.”

Ownership would obviously have to sign off on a deal surrounding Watson given the bounty it would take to acquire the 25-year-old quarterback and his off-field situation right now. Remember, he’s facing allegations from north of 20 women of sexual assault and/or misconduct. While Watson has yet to be charged criminally, that’s a major backdrop here .

Prior to the aforementioned allegations being levied against Wa tson, Philadelphia was among the teams most bandied about in trade possibilities once the quarterback made it clear he wanted out of Houston.

There’s good reason for this.

The Philadelphia Eagles have an additional first-round pick in the 2022 NFL Draft and what will likely be another second-round selection stemming from the Carson Wentz trade to the Indianapolis Colts last offseason.

Any objective person would conclude that Watson is an upgrade over Hurts. The former first-round pick from Clemson led the NFL in passing yards a season ago with 4,823 while tallying 36 total touchdowns against seven interceptions.

As for Philadelphia, this is certainly something to keep an eye on should the team struggle gathering wins with Hurts under center moving forward.

Texans quarterback Deshaun Watson and girlfriend Jilly Anais are the proud parents of a french bulldog. The YouTuber and “New Safe” singer introduced “6ix Watson” in a post on her Instagram Story, which included the pup’s official Instagram account. “Wassup World! Newest member of the gang checkin in! I’m 12...
NFL・12 DAYS AGO
Sportsnaut

The New Orleans Saints continued their now three-game losing streak to the Philadelphia Eagles on Sunday at Lincoln Financial Field in Philadelphia, losing 40-29. After losing Jameis Winston to an ACL injury, Trevor Siemian made his third-straight start for the Saints. Siemian struggled to find a flow with the offense in the first half, scoring only on an 18-yard connection to Adam Trautman. Additionally, Siemian threw two interceptions, one of them with Eagles’ cornerback Darius Slay running it down for a pick six to end the half at 27-7.
NFL・12 DAYS AGO
bleedinggreennation.com

Let’s get to the Philadelphia Eagles links ... Jordan Mailata didn’t grow up playing football, but he gets it. As an offensive lineman, as a left tackle, his main job is to protect the quarterback. And much like Jason Peters before him, Mailata is a bodyguard of sorts. So when he saw Saints defensive end Marcus Davenport give Jalen Hurts a late push out of bounds in the first quarter of Sunday’s 40-29 win, the 6-foot-8, 365-pound Mailata wasn’t happy. And he let him know. “For me, it’s protecting my family,” Mailata said. “… All these guys on the team, are my family. And so for me, protecting my family is what made me do that. For me, seeing my brother get hit, pushed out of bounds late, it didn’t roll with my right.”
NFL・12 DAYS AGO

Philadelphia Eagles breakout players this team should build around

Have you ever had a relationship that wasn’t going well and even though you knew the best course of action would be to leave you just couldn’t make yourself do it? That’s what being a Philadelphia Eagles fan is like sometimes. You want to keep believing in them, but they’ve broken your heart so many times that you’re petrified they’re just going to get your hopes up and let you down yet again.
NFL・12 DAYS AGO
Sportsnaut

When the Philadelphia Eagles dropped a heartbreaking home game to the Los Angeles Chargers on Nov. 7, reaching the playoffs
NFL・11 DAYS AGO
FanSided

Darius Slay seems like he knows how to bring it at practice. He and DeVonta Smith have been mucking it up for months now at Philadelphia Eagles practices, suggesting that one could play the other’s positions with ease, and for the most part, the duo have made each other better, as their respective stat lines clearly indicate.
NFL・11 DAYS AGO
FanSided

Saquon Barkley might just be the most curious player in the NFL. The second-overall pick in the 2018 NFL Draft, Barkley is currently signed to the ninth-largest contract of any running back in the league and might just be the most athletically gifted player at the position right now. His bench, vert, weight, and 40 all rank in the 90th-or-better percentiles according to Mockdraftable, and his tree-trunk legs make him as hard to slow down as he is to tackle.
NFL・10 DAYS AGO

Eagles Week 12 studs and duds: Philadelphia gives one away in Jersey

The Giants take what the Eagles give them, a win. There’s nothing that can be said about this one other than what Philadelphia Eagles head coach Nick Sirianni said. You can’t turn the ball over four times and lose the turnover battle by a 4-0 margin and expect to win many games in the NFL (if you can expect to win any).
NFL・9 DAYS AGO
insidetheiggles.com

The holidays are here! And with shipping rates and times escalating, you need to start shopping for the Philadelphia Eagles fans in your life. If you’re like me, the sleigh bells are about to start ringing. As soon as that Thanksgiving dinner is finished, we transition to Christmastime. Or maybe...
PHILADELPHIA, PA・13 DAYS AGO
Big Blue View

The Chris and Joe Show - Previewing the Philadelphia Eagles

The New York Giants need to quickly turn the page from Monday Night Football. They have just 6 days to get ready for their third divisional matchup, facing the Philadelphia Eagles in Week 12. The Giants are currently 0-2 in NFC East play and are coming off of a bad...
NFL・12 DAYS AGO
FanSided

Philadelphia Eagles must get Greg Ward more involved in this offense

Ladies and gentlemen, we’d like to take this opportunity to reintroduce you all to Philadelphia Eagles wide receiver Greg Ward. Remember him? If you’re a little hazy, don’t worry. We’ve got you covered. Greg Ward is the wide receiver comparative to what Jordan Howard and Boston Scott somehow became in...
NFL・14 DAYS AGO

Well, that didn’t take long. After watching Marcus Epps save a special teams touchdown by Braxton Berrios for a 79-yard return, Gardner Minshew nailed Dallas Goedert for a 36-yard touchdown on his very first drive as the Philadelphia Eagles‘ starting quarterback. Now granted, this technically wasn’t Minshew’s first drive as...
NFL・2 DAYS AGO
The Game Haus

The Eagles faced the Giants over the weekend in the Meadowlands on Sunday afternoon. This was mostly a defensive game as both teams struggled to get any point production. The offense took a step back this week, as Jalen Hurts struggled to pass the ball. The running attack was one of the few positive aspects of their offense in this game. The Defense however managed to keep the Eagles in this game, as they really made a couple of key stops. The Eagles lost this game by a score of 13-7 which puts them at a record of 5-7 on the year. This article will recap the Philadelphia Eagles’ Week 12 game against the New York Giants.
NFL・6 DAYS AGO
Sportsnaut

Depositions for the Deshaun Watson lawsuits and legal battle will reportedly begin today, with the attorney for the Houston Texans
NFL・8 DAYS AGO
ganggreennation.com

The Eagles and Jets last met in 2019, as Luke Falk was at the helm for the Jets, who predictably lost 31-6. No Jets team has ever beaten Philadelphia in regular season action and the road team Eagles will be favored on Sunday. Despite being 5-7, the Eagles are widely considered to be better than their record as they have four losses by six points or less and a win could keep them in postseason contention so it’s a big game for them.
NFL・3 DAYS AGO

Schefter on Deshaun Watson: “I Do Think Lurie Would Bring Him In”

ESPN NFL Insider Adam Schefter joined the John Kincade show for his weekly hit (Wednesdays at 8:10am) and discussed many things, including what exactly Gardner Minshew is. Gardner Minshew led the Eagles to a 33-18 win against the Eagles and was close to perfect in the game. But is Minshew the answer for the Eagles? Probably not.
NFL・3 HOURS AGO
FanSided

It’s a statement that would have sounded ludicrous before the start of the 2021 NFL season, and perhaps as recently as a few weeks ago, but Philadelphia Eagles’ second-year signal-caller Jalen Hurts absolutely deserves MVP consideration for his efforts thus far. I’m not under the illusion that he’ll actually nab...
NFL・13 DAYS AGO
bleedinggreennation.com

Let’s get to the Philadelphia Eagles links ... From Mitch Goldich: (@mitchgoldich): Are the Eagles’ recent extensions the behavior of a team preparing to make three first-round picks, and not of a team planning to trade for a QB making $30 million? Or is that reading too much into things? [...] Based on the look of the 2022 draft class, my guess would be that they won’t draft one with one of their three first-round picks, seeing as though Jalen Hurts has come along and may have a brighter future now than any of those guys. Could they trade for one? Absolutely. Owner Jeffrey Lurie is sufficiently consumed with getting the quarterback position righted post-Carson Wentz, and I think Roseman and his crew would at least investigate the idea of Deshaun Watson or Russell Wilson in the offseason, anyway. It’s not a bad place to be, Mitch, with one quarterback in-house you like, and the continued flexibility to get another one if the right opportunity presents itself.
NFL・11 DAYS AGO
6abc

The conditional 2022 draft pick that the Indianapolis Colts sent to the Philadelphia Eagles last offseason for quarterback Carson Wentz could be clinched as a first-rounder Sunday. The Eagles need Wentz to play 75% of the Colts' offensive snaps this season to turn the pick into a first-round selection in...
NFL・3 DAYS AGO