‘The Masked Singer’ spoilers: Who is Queen of Hearts?

By Paul Sheehan
GoldDerby
20 days ago 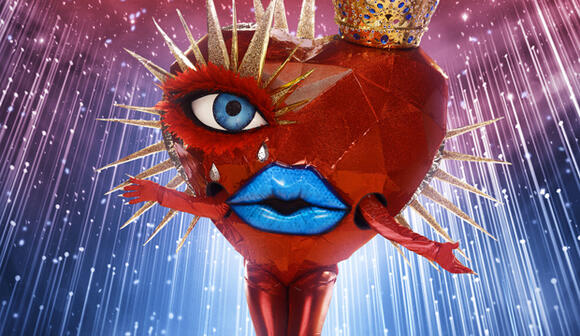 Of the 17 celebrities competing on season 6 “ The Masked Singer ” season 6, the Queen of Hearts has one of the best voices. She has been a frontrunner to win the Golden Mask since she made her debut as part of Group B on the September 29 episode. Season 6 of “The Masked Singer” boasts one of the most competitive lineups in the show’s history. Among the musical stars that have exited already are Toni Braxton , Tyga and Ruth Pointer . While we were surprised to see them go so soon, we weren’t shocked when their identities were revealed by host Nick Cannon .

You see, we had decoded all the clues that were given about her along the way. We’ve done the same with the remaining acts in Group B — Banana Split (a double act), Caterpillar, Mallard and Queen of Hearts — who are performing on the November 17 semifinal. Keep reading for all  the “The Masked Singer” spoilers, including the answer to the question, “Who is Queen of Hearts”?

We’ve already had a tease of the true name of each of the 17 contenders for the Golden Mask in the sneak preview special that aired on September 12. And we got to hear one of them, the Queen of Hearts sing. She delivered a heart-rending cover of the Edith Piaf classic “La Vie en Rose,” which was shown again on episode 5.

Before the first episode, the producers released a series of teases about the famous faces hidden inside these masks. Among the facts revealed was that one of “The Masked Singer” contestants had made out with Sean Penn . Combine that with the stat that, as a group, they can brag of bagging 27 Grammys from 85 nominations and we are sure we know the name of the Queen of Hearts.

While the temptation is to say Madonna , who was married to the actor in the 1980s, we are convinced that the Queen of Hearts is Jewel . The singer/songwriter dated the two-time Oscar winner in the mid 1990s. And she has earned four Grammy nominations since her smash debut album “Pieces of You” back in 1995.

Jewel accounts for just one of the 32 marriages and one of the 20 divorces of this season’s contestants as her union with pro rodeo cowboy Ty Murray ended in 2014 after 16 years together. Her ties to him (they have a son) would explain the photo we saw in the sneak peek of a horse in a field.

On episode 3, the Queen of Hearts nailed her cover of “Born This Way” by Lady Gaga and did likewise on episode 7 with her version of “River” by Bishop Briggs . Before she sang each song, she teased us with a series of clues that only confirm our theory.

The Queen of Hearts, who is shaped like a jewel, confessed that she grew up in a house that lacked warmth; Jewel was born in Utah but raised in Alaska.

The clues video concluded with a photo of Hilary Swank . The two-time Oscar winner is an animal lover and had a dog named Jewel.

We won’t know for certain if the Queen of Hearts is Jewel until she is unmasked. That will happen when she loses an audience vote or wins the show. Do you think we are right about the true identity of the Queen of Hearts? Sound off in the comments section with your best guesses.

SEE exclusive predictions: Who will win ‘The Masked Singer’?

Be sure to make your predictions to influence our reality TV racetrack odds. You can keep changing your predictions until just before the next episode airs on Fox. You’ll compete to win eternal bragging rights and a spot on our “The Masked Singer” Season 6 leaderboard. See our contest rules and sound off with other fans in our reality TV forum . Read more Gold Derby entertainment news .

As the seasons go on for The Masked Singer, the producers continue to find iconic names to unmask. We’ve seen some giant names in movies and music, but who has been unmasked from talent shows?. The Masked Singer is such a cool show because it brings celebrities from all walks...
TV & VIDEOS・12 DAYS AGO
The US Sun

'The Masked Singer': The Skunk Gets Sprayed After Epic Group A Finals -- See Who Got Unmasked!

‘The Masked Singer’: The Skunk gets snuffed out

LOS ANGELES - The Skunk’s performance on the Group A Finals on "The Masked Singer," Wednesday night was far from stinky, but it was just enough to get the contestant sent home. When R&B legend Faith Evans was unveiled as the Skunk, it almost didn’t make "scents" to the judges...
TV & VIDEOS・6 DAYS AGO

What to expect from The Masked Singer season 6's final episodes

There are only three episodes left in The Masked Singer's sixth season, but there's still a lot of show left to look forward to. For starters, the Fox series is taking its own Thanksgiving break this week, so there is no new episode. But things return with a bang on Dec. 1, when the Group A finals air. For the first time ever, unmasked celebrities will be singing with the masked competitors. Jesse McCartney (formerly known as the season 3 fan-favorite Turtle) and two-time Grammy winner Michael Bolton will be duetting with Bull and Skunk, respectively.
TV SERIES・13 DAYS AGO
talentrecap.com

On Wednesday night, Faith Evans was revealed to be Skunk on Season 6 of The Masked Singer. The Grammy-winning R&B singer made it all the way to the Finals of Group A, but she was beaten by Bull, who will now move on to the finale. After being unmasked, Evans...
TV & VIDEOS・5 DAYS AGO
goodhousekeeping.com

Sorry, Masked Singer family — you're going to have to wait an extra week to hear Ken Jeong's next round of wildly out-there guesses. Just days after season 6 of the Fox show said goodbye to two contestants in the Group B semifinals — Willie Robertson was revealed as Mallard, while Bobby Berk ended up being Caterpillar — The Masked Singer is now pausing the competition for the week of Thanksgiving. In other words, there's no new episode of The Masked Singer on this Wednesday.
TV SERIES・13 DAYS AGO
AceShowbiz

'The Masked Singer' Recap: Skunk Is Eliminated, Revealed to Be Best-Selling Singer

The Masked Singer Season 6 returns Wednesday night for the Group A Finals, and the episode will feature some special guests. Jesse McCartney and Michael Bolton will be on hand to perform duets with the two finalists. We’ll also find out which contestant is moving on to the grand finale.
CELEBRITIES・6 DAYS AGO
SFGate

‘The Masked Singer’ Reveals Identity of the Skunk: Here Is the Star Under the Mask

“The Masked Singer” has gotta have Faith. Singer Faith Evans was unmasked as the Skunk on the eleventh episode of Season 6, “Group A Finale.” She didn’t stink — actually, the show’s panelists argued that her performance might be one of the best in “Masked Singer” history. But nonetheless, with the Group A finals coming down to her and the Bull, the Skunk lost out.
TV & VIDEOS・6 DAYS AGO
UPI News

Faith Evans gets the boot on 'Masked Singer'

Dec. 1 (UPI) -- Recording artist Faith Evans was eliminated from Season 6 of Fox's The Masked Singer Wednesday night. The Grammy winner was dressed as a skunk for the competition. Other celebrities who were previously booted from the competition this season include Bobby Berk, Willie Robertson, Natasha Bedingfield, John...
CELEBRITIES・6 DAYS AGO
countryliving.com

The Masked Singer season 6 is officially on its final stretch with Bull, Skunk, Banana Split and Queen of Hearts still in the running for the coveted Golden Mask. But before a winner can be crowned, they must first duke it out on stage — but not in the way it’s been done before.
TV SHOWS・5 DAYS AGO

‘The Masked Singer’ Cuts One More Group A Contestant: And the Skunk Is…

(Warning: This post contains spoilers for Wednesday’s Group A finals of “The Masked Singer” Season 6.) On Wednesday, “The Masked Singer” staged a showdown between Bull and Skunk, the two contestants still standing for Group A, to see which one of them will go on to duke it out with the Group B winner in the season finale.
TV & VIDEOS・6 DAYS AGO
Parade

It's the Group A Finals! Who Was Eliminated from The Masked Singer Tonight?

The Masked Singer took a week off for Thanksgiving. But with the turkey digested, it was time to get back to the matter at hand. With only two remaining masks left in each group, and only two spots in the finale, it was a showdown for the ages. First up was Group A, as two powerhouse performances left us to wonder who was voted off The Masked Singer tonight.
TV SHOWS・6 DAYS AGO
cartermatt.com

Is Queens new tonight? Season 1 episode 7 spoilers + who got shot?

Is Queens new tonight on ABC? After a run of new episodes to kick off the season, are we now amidst a break in the action?. We don’t want to keep you waiting, so let’s go ahead and get the bad news out of the way: There is no installment on the air tonight. We are in the midst of a brief, one-week break that is going to give us a chance to catch our breath — and also think about that huge cliffhanger! Who got shot in the closing minutes, who is responsible, and where are things going to go from here? Right when everyone starts to be moving in a good direction, of course something terrible happens.
TV SERIES・7 DAYS AGO
talentrecap.com

Fans will have to sit in suspense a little longer to find out the characters to be unmasked during the finals of The Masked Singer Season 6. Fox will air a repeat of the hit show tonight in observance of Thanksgiving. Fox will also show a repeat episode of new show Alter Ego.
TV SHOWS・13 DAYS AGO

It wouldn't be the holiday season without classic Christmas carols and festive holiday pop songs to sing along to with family and friends. There is definitely no shortage of seasonal music on the Hallmark Channel, a network that can put anyone in the holiday spirit with their comforting and heartwarming holiday movies. But sometimes they take it a step further than just having characters sing carols around the neighborhood. Some of the actors and actresses we look forward to seeing season after season are actually musically gifted and get to show off their singing skills in their holiday films.
MUSIC・5 DAYS AGO