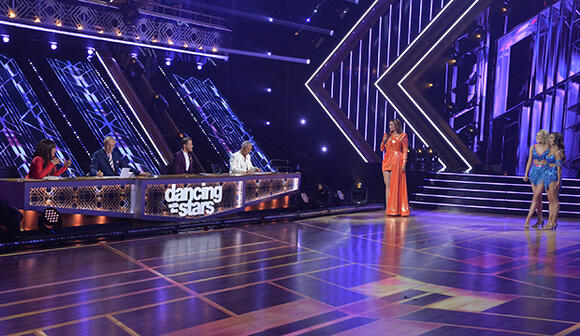 “ Dancing with the Stars ” has a (limited) studio audience again for Season 30, and if there’s one thing you can count on the fans for, it is the unnecessary booing of constructive, fair critiques from the judges that are actually helpful for the celebrity.

After JoJo Siwa and Jenna Johnson ‘s peppy cha-cha on Monday, Derek Hough advised her to learn to harness her energy in her routines. “I think with you, more is more, right? But sometimes, especially on the side by side, more isn’t more. You’ve got to contain that energy a little bit. It can get a little bit wild and lose the quality of movement. And I know that because you’re a dancer –” he said before he crowd started booing, cutting him off. Bruno Tonioli agreed with Hough — and so do Siwa and Johnson.

The “Dance Moms” alum then shared an exchange that happened between her and Hough during the commercial break before the elimination. “Derek looked at me and was like [ signaling ]. He had like a moment and he was basically saying like, ‘I don’t want you to think that what I said means you did bad,'” Siwa revealed. “Because he knows that that’s how my brain will automatically work, and it was genuine, like, ‘You did good.'”

Johnson added that Hough — who gave them a 7, contributing to their score of 31 for the week, the second highest of the night — is “right in a sense,” to which Siwa said, “Of course.” “We do work on that in all of our rehearsals — controlling that energy or just putting it into intentional places,” Johnson stated. “So I’m excited for next week because I feel like we can really take those critiques and work on them.”

For Britney Week, the pair will dance to Britney Spears ‘ iconic debut single “Baby One More Time.” “Britney is a legend,” Siwa gushed. “I actually was lucky enough to see her perform in Vegas and after watching that show, I was just like, ‘That is a performer.’ That is a genuine, true performer, and that is something that I love and I think is so respectable about her.”

PREDICT who will win ‘Dancing with the Stars’

Dancing with the Stars needs to get better people to compete, better role models. They also need to get rid of Tyra !

He told her. It's best if you leave and take Trya with you. You both are ruining the show.

I have watched every Season until now. All the Pros include in every performance, dances of sexual nature, AND FRANKLY I WILL NOT WATCH TWO WOMEN GRINDING ALL OVER EACH OTHER, AS I WOULD NOT WANT TO WATCH TWO MEN! THEY CAN DO WHATEVER THEY WANT AT HOME, BUT KEEP IT OUT OF MY FACE,

Julianne Hough will be making her grand return to the Dancing with the Stars ballroom as a special guest judge for the season 30 finale. The professional dancer and choreographer will act as a fourth member of the panel as her brother Derek Hough remains under quarantine. Due to his...
CELEBRITIES・14 DAYS AGO
Us Weekly

Getting back out there! Following her recent breakup from Kylie Prew, JoJo Siwa knows exactly what she wants from her search for someone special. “Listen, I want a cuddle buddy bad. I’m not ashamed to admit it,” JoJo, 18, exclusively told Us Weekly on Tuesday, November 23, during a joint interview with her mother, Jessalynn Siwa, while promoting their show Siwas Dance Pop Revolution.
CELEBRITIES・12 DAYS AGO
Us Weekly

An emotional moment! Iman Shumpert and Daniella Karagach won season 30 of Dancing With the Stars on Monday, November 22 — and he’s dedicating his mirrorball to his mom, L’Tanya Shumpert. “My mother has been coming to support every week, her and my father. They weren’t able to be here...
THEATER & DANCE・14 DAYS AGO
Billboard

JoJo Siwa Is Flawless In ‘Dancing With The Stars’ Grand Final: Watch

JoJo Siwa might as well go by the name of “twinkle-toes,” following her do-it-all efforts throughout this season of Dancing With The Stars. On a night when the mirrorball trophy was decided, the teen celebrity was back to her glittering best Monday with two perfect performances, including a tango/cha cha fusion, which she nailed with her dance partner Jenna Johnson to Icona Pop’s “I Love It”.
TV SHOWS・14 DAYS AGO

“Extra’s” Cheslie Kryst spoke with JoJo Siwa and Jenna Johnson after the season finale of “Dancing with the Stars.”. On the season finale, JoJo and Jenna performed to Lady Gaga’s song “Born This Way.” Jenna shared, ‘I think it was just the perfect last song for us.”. Though they didn’t...
CELEBRITIES・14 DAYS AGO
Popculture

JoJo Siwa and Jenna Johnson might not have taken home the Mirrorball Trophy during Monday's Dancing With the Stars finale, but the pair couldn't be more proud of how they performed in Season 30. Coming in second to NBA star Iman Shumpert and his partner Daniella Karagach in a surprise upset, Siwa and Johnson earned two perfect scores during the finale, as well as the most combined points of any duo throughout the season.
TV SHOWS・14 DAYS AGO
Insider

JoJo Siwa attended the 2021 iHeartRadio Jingle Ball for the first time on Friday. Siwa, 18, wore an open blazer that showed off her midriff alongside heels adorned with bows. Siwa told E! News that her mother, Jessalyn Siwa, purchased the top. JoJo Siwa stepped onto the red carpet in...
CELEBRITIES・2 DAYS AGO
justjaredjr.com

JoJo Siwa has worn one of her most daring looks ever and she revealed that her mom helped pick out the outfit!. The 18-year-old Dancing With the Stars runner-up looked amazing at 102.7 KIIS FM’s Jingle Ball 2021 presented by Capital One at The Forum on Friday night (December 3) in Los Angeles.
LOS ANGELES, CA・4 DAYS AGO

Julianne Hough is headed to the “Dancing With the Stars” finals as a guest judge. The pro dancer (and actress and singer) will be filling in for brother Derek Hough, who has been quarantining since testing positive for COVID-19 in a breakthrough case last week. TheWrap has learned that while...
CELEBRITIES・14 DAYS AGO
E! News

Watch: "The Rundown": JoJo Siwa Finds THIS Female TikToker Attractive. JoJo Siwa is pulling back the curtain when it comes to her love life. The Siwas Dance Pop Revolution star, who was in a relationship with girlfriend Kylie Prew for nine months before they called it quits in October, opened up about how she's been dealing with heartbreak, her dating deal-breakers and more in an exclusive interview with E! News' The Rundown.
MUSIC・7 DAYS AGO
ETOnline.com

JoJo Siwa still has Dancing With the Stars on her mind all the time. The singer and TV star opened up to ET about her time on the show, and her friendship with dance partner Jenna Johnson, at the iHeartRadio 102.7 KIIS FM Jingle Ball concert on Friday. "I miss...
INGLEWOOD, CA・1 DAY AGO
justjaredjr.com

JoJo Siwa waves to the cameras after taping her appearance on The View in New York City on Tuesday afternoon (November 23). The 18-year-old Dancing With The Stars runner up stopped by ABC studios for an appearance on the morning talk show with her mom, Jessalynn to chat about her run on the dancing competition show, and more.
NEW YORK CITY, NY・14 DAYS AGO

JoJo Siwa On Letting Her Hair Down And Her New, Adult Look

If you managed to catch the AMAs, you might have noticed that teen star JoJo Siwa had a brand new style. At the awards ceremony, she decided to ditch her signature ponytail and bow and go for a more sophisticated, grown-up style. And people definitely noticed! JoJo previously said that...
CELEBRITIES・11 DAYS AGO
TVShowsAce

JoJo Siwa Is Keeping Her Relationship Options Open For Now

JoJo Siwa is still single for the time being following her split with Kylie Prew. But that doesn’t mean she isn’t open to the idea of physical affection!. The 18-year-old pop star has a lot going on at the moment. She’s competing in the Dancing With The Stars season finale tonight and also recently presented at the AMAs. Dating isn’t really a top priority for her right now, but she’s not really ruling anything out. Keep reading to see what she said.
CELEBRITIES・14 DAYS AGO
UPI News

Nov. 22 (UPI) -- Julianna Hough will be joining the Season 30 finale of Dancing with the Stars on Monday as a guest judge in place of her brother, Derek Hough. Derek Hough was recently diagnosed with COVID-19 and is still in quarantine. The official Instagram account for Dancing with...
CELEBRITIES・14 DAYS AGO
TVShowsAce

JoJo Siwa Is Perfectly Happy With Her ‘DWTS’ Journey

Many Dancing With The Stars Season 30 contestants did exceptionally well. From the beginning of the season, many believed that JoJo Siwa and Jenna Johnson would take home the Mirrorball Trophy. That didn’t quite happen and Daniella Karagach and Iman Shumpert won instead. but the young pop star is fine with the way things turned out.
CELEBRITIES・12 DAYS AGO
talentrecap.com

Today is a busy day for Dancing With the Stars runner up JoJo Siwa. First, she was on Good Morning America for the DWTS full cast after party, then she went on to The View with her mom to talk about Siwa’s Dance Pop Revolution and everything Dancing With the Stars.
THEATER & DANCE・13 DAYS AGO
talentrecap.com

Last week, after the Dancing with the Stars semifinals, judge Derek Hough announced to fans that he tested positive for Covid-19 despite being vaccinated. Although he stated he felt well, he will continue to quarantine per doctors’ recommendations. Now, it is announced that his sister and professional dancer Julianne Hough will return to the ballroom to judge in his place for tonight’s finale.
PUBLIC HEALTH・14 DAYS AGO
Popculture

'Dancing With the Stars': Sharna Burgess Reveals Why She's Not Touring With Her Co-Stars

Dancing With the Stars will be going on the road in 2022. After taking a year off due to the COVID-19 pandemic, the Dancing With the Stars: Live! tour will kick off in January. However, there's one pro dancer that won't be taking part in the tour — Sharna Burgess. On Instagram, Burgess, who competed in the past season of the competition alongside her boyfriend Brian Austin Green, explained why you won't see her alongside the rest of the pros on the tour.
CELEBRITIES・14 HOURS AGO
People

Like millions of others across the globe, JoJo Siwa can appreciate a good Adele cryfest in the car. After the 18-year-old star split from girlfriend Kylie Prew in October, it was the British singer who helped inspire a flood of tears with her 2015 hit "All I Ask." Siwa told...
CELEBRITIES・6 DAYS AGO