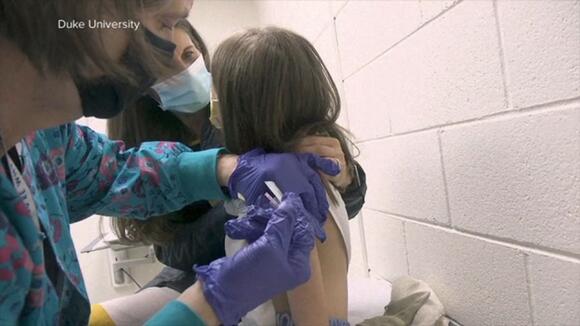 NEW YORK (WABC) -- The FDA is reviewing data on Pfizer's vaccine for children ages five to 11.

One federal official told ABC News those shots could begin rolling out before Thanksgiving, a few weeks later than hoped

Since the beginning of the month, hospitalizations for COVID have dropped by more than 20%.

The COVID-19 forecasting hub predicts that U.S. hospitalizations will continue to fall into October.

But the death toll is still devastating. There have been more than 27,000 in a roughly two-week span.

YouTube is wiping vaccine misinformation and conspiracy theories from its popular video-sharing platform.

The ban on vaccine misinformation, announced in a blog post on Wednesday, comes as countries around the world continue to offer free immunizations for COVID-19 to a somewhat hesitant public.

COVID-19 kept her family from attending her wedding, so she got married on the Canadian border

When COVID-19 restrictions made it difficult for a Canadian bride to have her family at her US wedding, she did the next best thing -- she brought her wedding to the border.

Karen Mahoney and her new husband, Brian Ray, told CNN they met 35 years ago over a love of skiing, and when they finally got engaged in March, the ski instructors didn't want to wait to get married. But Mahoney said there was really only one thing that mattered to her: having her parents and 96-year-old grandmother at the wedding.

The United States has been limiting non-essential travel at land crossings with Canada since the start of the COVID-19 pandemic and extending those restrictions on a monthly basis. Air travel between the countries is possible, but even with her family being vaccinated, Mahoney said, she felt it put them at greater risk, especially considering her grandmother's age.

Mahoney said the couple has a friend who works for border patrol who had arranged for her to meet her family at the closed border previously, including when Ray asked her father, Paul, for her hand in marriage. So they asked the friend for help in making it work again.

If NBA players are not vaccinated, they shouldn't be on the team, basketball Hall of Famer Kareem Abdul-Jabbar told Rolling Stone.

"The NBA should insist that all players and staff are vaccinated or remove them from the team," said Abdul-Jabbar.

Abdul-Jabbar elaborated on that point during an interview on Don Lemon Tonight Monday, saying, "I don't think that they are behaving like good teammates or good citizens. This is a war that we're involved in. And masks and vaccines -- they are the weapons that we use to fight this war."

Abdul-Jabbar has been a vocal advocate for getting the COVID-19 vaccine. The NBA great received his vaccine on camera and appeared in an NBA public service announcement encouraging others to get vaccinated.

Using personnel from the city's Health + Hospitals Test and Trace Corps, New York City is establishing a new, permanent public health outreach agency, Mayor Bill de Blasio announced Wednesday. The new agency will be called the NYC Public Health Corps. Created to trace coronavirus exposures, the Test and Trace Corps - which will number 500 by December and just completed its millionth tracing contact - will now be a permanent city function. "The new Public Health Corps announced today will build on the hard work already being done in our communities to fight this pandemic and prepare us for future emergencies," said NYC Health Commissioner Dr. David Chokshi.

New York's vaccine mandate faces another challenge in court Wednesday. It comes just a couple of days before the mandate for New York City school employees is set to take effect. Nurses from Long Island who say their religious liberties are being harmed by this vaccine mandate will appeal to a three-judge panel Wednesday morning in Lower Manhattan.

Pfizer and BioNTech said Tuesday they have submitted Covid-19 vaccine data on children ages 5 to 11 to the US Food and Drug Administration for initial review, but are not yet seeking emergency use authorization.

A formal submission to request EUA for the vaccine is expected to follow in the coming weeks, the companies said in a statement. Submissions to the European Medicines Agency and other regulatory authorities are also planned, they said.

United Airlines is facing two separate lawsuits over its COVID-19 vaccine mandate. One of the two lawsuits was filed in the U.S. District Court in Fort Worth, Texas. In that suit, the employee alleges that their religious exemption was not accommodated.

Last week, before the mandate went into effect, six employees asked a federal judge to block the vaccination requirement.

The employees, including two pilots and a flight attendant, are accusing the airline of a "pattern of discrimination against employees who requested religious or medical accommodations." They say the airline's approach of putting exempt employees on an indefinite leave of absence means "that they would be effectively terminated."

In response to the lawsuit, the airline said it will "vigorously defend its policy."

Submit a News Tip or Question

Why would a person subject their babies...your babies...NOT Big Pharma' or the Government's) to a vaccine that does not even prevent them from contracting the virus...but that does come with potentially serious and life threatning side effects...A vaccine that is not even a vaccine but gene therapy.. that is causing the virus to mutate and creating even more harmful variants..

To all those saying “trust the science,” the science clearly shows that children of this age are rarely seriously impacted by Covid. Making up only 0.06% of deaths resulting from Covid. Do you not believe that science? Do you only pick the “science” that you want to believe?

Still experimental pushing this too fast without the proper steps that normally would be taken with a vaccine . Being pressured by government and who ever else to push these vaccines through .

UVALDE, Texas — The man who opened fire in a Texas elementary school Tuesday, massacring 19 children and two adults, was a loner who kept to himself and avoided any kind of conversation, according to the boyfriend of the gunman’s mother. The shooter, identified by multiple law enforcement...
UVALDE, TX・2 DAYS AGO
Daily Beast

Sen. Ted Cruz (R-TX) abruptly walked off from a British journalist’s questions about gun violence in America two days after an elementary school massacre in his state left 19 children and two adults dead. Cruz, who is due to appear at a National Rifle Association convention this weekend, became...
CONGRESS & COURTS・1 DAY AGO
GOBankingRates

May is almost here, and millions of households are looking forward to their next SNAP payments. See: Surprising Things You Can Buy With Food StampsFind: SNAP 2022 -- Is My State Giving Out Extra Money...
AGRICULTURE・6 DAYS AGO
Business Insider

Musk's taunt comes after Ocasio-Cortez said she would ditch her Tesla for another electric car that was made by unionized workers.
ECONOMY・16 HOURS AGO

Energy Secretary Jennifer Granholm said President Joe Biden is laser-focused on knocking down sky-high gasoline prices, though she concedes that even the most powerful person on the planet has limited influence to do that.
NEW ORLEANS, LA・1 DAY AGO
The Associated Press

UVALDE, Texas (AP) — Frustrated onlookers urged police officers to charge into the Texas elementary school where a gunman’s rampage killed 19 children and two teachers, witnesses said Wednesday, as investigators worked to track the massacre that lasted upwards of 40 minutes and ended when the 18-year-old shooter was killed by a Border Patrol team.
UVALDE, TX・1 DAY AGO