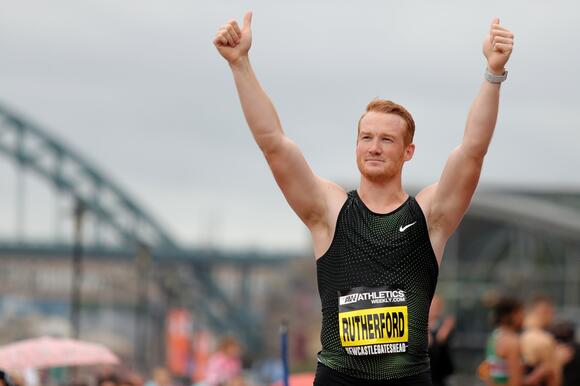 London 2012 Olympic long jump champion Greg Rutherford has been selected for the Great Britain bobsleigh squad as they aim to qualify for the 2022 Winter Games.

Rutherford will attempt to become the first British athlete to win a medal at both the summer and winter Olympics should the team make it to Beijing.

The 34-year-old added bronze from the 2016 Games to the long jump gold he claimed on a memorable ‘Super Saturday’ in London.

Rutherford, who retired from athletics in 2018, is set to compete as part of the four-man bobsleigh team, with qualification determined across seven events.

“A few weeks ago we had our trials and I managed to qualify for the British team to compete this winter,” Rutherford wrote on Instagram.

“The team now has to qualify for the Olympic Games by placing well on the World Cup circuit (as does every team).

“This has been a huge undertaking, going from a very retired former athlete to retraining in a new sport and qualifying for the team.

“A massive thank you to everyone who’s helped thus far.”

Rutherford, whose team continue to look for more financial backing on their self-funded Olympic journey, added: “We start competing in a couple of months’ time with the medal dream very much alive.”

Rugby league is set to return to a form of licensing under proposals unveiled by global sports media giant IMG as part of its long-term ‘strategic partnership’ with the sport on Wednesday.Automatic promotion and relegation to Super League would be scrapped and clubs instead elevated on the basis of their category status, which will be determined by a number of on- and off-field factors.The proposals will only come into force at the end of next season if a majority of the 37 current professional clubs vote in favour at a meeting next month.𝗥𝗲𝗶𝗺𝗮𝗴𝗶𝗻𝗶𝗻𝗴 𝗥𝘂𝗴𝗯𝘆 𝗟𝗲𝗮𝗴𝘂𝗲@IMG have presented their recommendations#SuperLeague— Betfred...
TRAVEL・29 MINUTES AGO
The Independent

England will stage their first standalone fixture at Twickenham when they face France in next year’s TikTok Women’s Six Nations.Previous appearances at the venue have come on the same day as the men’s team play.The Red Roses will take centre stage when they clash with France on April 29 in a repeat of the fixture that saw them crowned Grand Slam champions earlier this year.England will also face Scotland at Kingston Park on March 25 and Italy at Franklin’s Gardens on April 2, while they face Wales and Ireland away.“To have a standalone Red Roses fixture at Twickenham Stadium is...
RUGBY・2 HOURS AGO
The Independent

Declan Rice predicts who is the ‘future of English football’

Declan Rice has said Jude Bellingham can be ‘the future of English football for the next 15 years’.Bellingham started next to Rice at the centre of England’s midfield in their Nations League matches against Italy and Germany this week, and many observers felt that the 19-year-old did enough to secure a place in the Three Lions’ starting XI for their World Cup-opener against Iran in November.England fell to a 1-0 defeat by Italy on Friday (23 September) before drawing 3-3 with Germany in a thrilling game on Monday (26 September), but Bellingham’s performances marked some of the more positive aspects...
WORLD・2 HOURS AGO
The Independent

Damon Hill has revealed a key difference between Charles Leclerc and the Ferrari driver’s most famous predecessor, Michael Schumacher.Leclerc started the 2022 Formula 1 season well, but Max Verstappen has been ruthless for Red Bull while Ferrari has repeatedly made mistakes, meaning the defending champion may claim his second world title at the Singapore Grand Prix on Sunday (2 October).At 24 years old, Leclerc still looks to have a bright future in F1, but he has an ‘anxious’ personality that distinguishes him from Ferrari legend Schumacher, according to Hill. “Charles is a very charming, intelligent kid, but he’s anxious....
SPORTS・1 HOUR AGO

‘Haters hate and lovers love!’: Ian Brown responds to criticism of his performance on solo tour

Ian Brown has responded to criticism of his performance after opening his UK and Ireland tour without a band.Fans of The Stone Roses frontman reportedly walked out of his show in Leeds on Sunday (25 September) after the singer performed to backing tracks.Many fans at the O2 Academy in Leeds were disappointed with the performance, calling it “bad” and comparing it to “karaoke”.“Gutted to see @ianbrown turn up to his £40 a ticket, sold out gig at Leeds tonight WITH NO BAND,” wrote attendee Steve Lathum on Twitter, alongside a video from the gig.“I’m a life-long fan but it...
MUSIC・1 HOUR AGO
The Independent

Max Verstappen is like a sporting ‘cannibal’ just as Michael Schumacher was, according to Formula 1 CEO Stefano Domenicali.Verstappen, 24, secured his first F1 title last season after a controversial final lap at the Abu Dhabi Grand Prix – the last race of the year. The Red Bull driver is on course for his second straight championship with the team and could even claim the title at the Singapore Grand Prix on Sunday (2 October).Such a triumph would move the Dutch-Belgian a small step closer to the joint-record of seven drivers’ titles that is shared by Ferrari legend Schumacher...
MOTORSPORTS・1 HOUR AGO
The Independent

England have played their final game before November’s World Cup and before Gareth Southgate names his squad in October.He can choose 26 players and will, though he said: “I don’t think it’s an ideal number.”And, as his choices for the 1-0 defeat to Italy and the 3-3 draw with Germany show, many of them will be automatic picks for him, providing they are fit.It leaves other questions for him to answer when turning a list of perhaps 35 candidates into his final 26.What is the goalkeeping pecking order?Monday may have been a fine night for Aaron Ramsdale. Nick Pope had...
SPORTS・43 MINUTES AGO