By Ryan Chapman
AllSooners
23 days ago 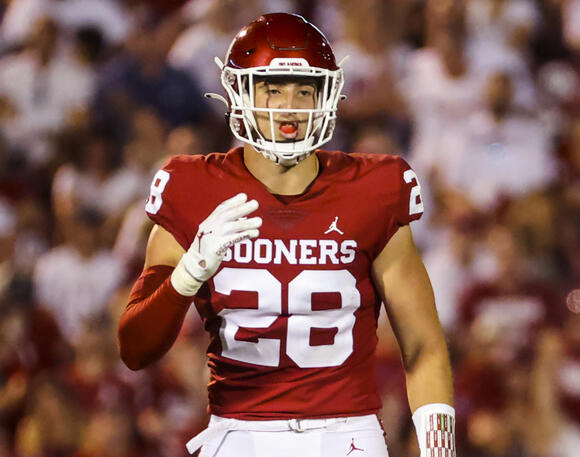 NORMAN- The Oklahoma Sooners might get a young piece back this week against Kansas State.

Lincoln Riley said that true freshman linebacker Danny Stutsman is nearing a return to the field.

“Danny’s really, really close,” Riley said during his weekly press conference on Tuesday. “Probably will end up being a game-time decision. He’s progressing very well, if not maybe even a little ahead of schedule. He’s a pretty tough cookie so no surprise there.”

In two appearances this season, Stutsman has logged 10 total tackles, eight of which have been solo, and forced one fumble.

Stutsman exited the Tulane game early with what appeared to be a left arm injury.

More good news flowed in for OU, as Riley said the team expects safety Delarrin Turner-Yell to play on Saturday.

“Delarrin’s doing well,” Riley said. “Certainly not a serious injury. Hope to have him back this week, if not, certainly expect him back sometime soon.”

Turner-Yell leads the Sooners with 25 tackles this season, and he also picked off his first past of the year last Saturday against West Virginia.

Riley did say that Oklahoma will be without the services of true freshman wide receiver Cody Jackson on Saturday as he is dealing with a “medical issue.”

The Sooners will need all hands on deck this weekend as they look to break their two-game losing streak to Kansas State in their first road contest of the season.

There is a full-blown quarterback quandary within Oklahoma football after true freshman Caleb Williams came off the bench in Week 6 and led the Sooners to a memorable comeback win against arch-rival Texas. And while no official word has been given if Williams will replace preseason Heisman favorite Spencer Rattler as the starter going forward, Dallas Cowboys wide receiver and former Oklahoma standout CeeDee Lamb is in full support of Lincoln Riley's decision to make the change after Rattler struggled early in the Week 6 contest.
OKLAHOMA STATE・7 DAYS AGO
ClutchPoints

Lincoln Riley and his Oklahoma Sooners remain undefeated after taking down the Texas Longhorns, 55-48, during the latest edition of the Red River Rivalry on Saturday in spectacular fashion. But it’s not just the comeback victory that has the entire Norman buzzing, but also the huge decision by Riley to bench quarterback Spencer Riley for backup Caleb Williams.
COLLEGE SPORTS・12 DAYS AGO
Sporting News

Oklahoma coach Lincoln Riley has once again kept alive a potential quarterback controversy between Spencer Rattler and Caleb Williams. The fifth-year coach, fresh off winning the Red River Showdown after benching Rattler for Williams, canceled the Sooners' regularly scheduled news conference with media on Wednesday. The move came after Oklahoma's student newspaper, the OU Daily, reported earlier in the day that Williams had taken first-team reps in practice.
OKLAHOMA STATE・8 DAYS AGO
AllSooners

Spencer Rattler's Best Days Can Still be Ahead of Him

Things have not gone according to plan for Spencer Rattler. Lincoln Riley’s handpicked quarterback, Rattler was supposed to come in and take the Sooners to new heights. But instead, a once in a century pandemic, an underperforming offensive line and the arrival of another incredibly talented quarterback have derailed Rattler’s path.
NFL・10 DAYS AGO

The most intriguing storyline to come out of the Red River Showdown will continue to carry us to 6:30 p.m. Saturday when the Oklahoma Sooners host the TCU Horned Frogs at Owen Field. At every opportunity, when presented the chance to name a starting quarterback for the week seven clash,...
COLLEGE SPORTS・9 DAYS AGO
AllSooners

Gary Patterson’s job just got a whole lot harder. The introduction of Caleb Williams into Saturday’s OU-Texas contest sparked the Oklahoma offense, and should probably be the guy going forward. After OU’s offense underwhelmed at points to start the year, Williams’ legs add an entirely different dynamic. And if it...
OKLAHOMA STATE・10 DAYS AGO
On3.com

Lincoln Riley and the Oklahoma Sooners survived a true Red River Shootout with the Texas Longhorns. Riley and the Sooners overcame an early deficit of 21 points as they trailed the Longhorns 28-7 in the second quarter to win in thrilling fashion 55-48. After the game, the Sooners’ headman took...
COLLEGE SPORTS・12 DAYS AGO
On3.com

Oklahoma head coach Lincoln Riley is very familiar with Texas quarterback Casey Thompson as the latter hails from the state of Oklahoma, and was recruited by Riley coming out of high school. Ahead of the Red River Rivalry, Riley reflected on his relationship with the Texas starter. “Yeah, Casey’s done...
COLLEGE SPORTS・13 DAYS AGO

DALLAS – Oklahoma Sooners Head Coach Lincoln Riley says that Saturday’s win over Texas was a tremendous, epic win, that may outweigh some of the other moments since he has become a head coach. “It was a hell of a fight. It really was,” Riley said. “I’m trying to think...
COLLEGE SPORTS・11 DAYS AGO
On3.com

The Red River Showdown between Oklahoma and Texas is on Saturday, but the rivalry is already reaching a boiling point. Head coaches Lincoln Riley and Steve Sarkisian started trending on Twitter on Thursday afternoon as fans started roasting the opposing coaches. These are just some of the most popular burns:
FOOTBALL・14 DAYS AGO

When the new season starts up, the league’s top coaches will be recruiting players, strategizing, calling plays and raking in the big bucks.
COLLEGE SPORTS・13 DAYS AGO
The Spun

Lincoln Riley Asked Who Starting QB Will Be vs. TCU

If Lincoln Riley’s not careful he’s going to mess around and overcomplicate Oklahoma’s current quarterback situation. Riley sent Spencer Rattler to the bench during the Oklahoma-Texas game on Saturday. It wasn’t even a surprising move. Rattler has been awful this season. His performance on Saturday was no different. Caleb Williams,...
COLLEGE SPORTS・12 DAYS AGO
On3.com

After falling victim to a blazing fast start by the Texas Longhorns, Lincoln Riley could’ve watched his team lay down and lose. Instead, his defense pulled their chin-straps tight and buckled down. Following the onslaught at the onset of the game by Texas, the Sooners defense held the Longhorns offense...
TEXAS STATE・12 DAYS AGO
On3.com

Saturday’s Red River Rivalry showdown between Texas and Oklahoma might go down as the best game of the 2021 college football season. Texas jumped out to a big early lead and it seemed as if Oklahoma would be blown out. That was until Oklahoma head coach decided to make a quarterback change.
OKLAHOMA STATE・10 DAYS AGO

Oklahoma coach Lincoln Riley didn’t like the resourcefulness of a student reporter who used binoculars to watch Caleb Williams take the first-team snaps in practice this week and then wrote about it, so Riley banned all media access. Tantrum much? Coaches are by nature control freaks, and when a reporter did what reporters do, and Riley couldn’t control it, he pitched a fit. If Riley stopped to think about it, he would realize that all TCU coach Gary Patterson had to do to figure out that Williams would start against the Horned Frogs on Saturday night is watch the video of last week’s comeback against Texas. Williams moved the offense; Spencer Rattler didn’t.
COLLEGE SPORTS・7 DAYS AGO
On3.com

Last season, Lincoln Riley coached the Oklahoma Sooners to victory in an epic four-overtime slugfest against Texas. However, it wasn’t the same — as the pandemic stopped it from being packed to the brim with rival fans. Now, a sold-out capacity crowd will be in attendance for the highly-anticipated Red...
OKLAHOMA STATE・12 DAYS AGO
heartlandcollegesports.com

The quarterback position in Norman, Oklahoma is the most-talked about quarterback position in college football right now. Spencer Rattler entered the season as the Heisman Trophy favorite, but his fall from grace culminated on Saturday against Texas, when after a second turnover he was replaced by Caleb Williams, who led Oklahoma to the largest comeback in Red River Rivalry history.
NORMAN, OK・10 DAYS AGO
USA TODAY

Oklahoma coach Lincoln Riley on starting quarterback: 'I still haven't made that decision'

After Caleb Williams led Oklahoma to a comeback win over Texas on Saturday, Lincoln Riley hasn't made decision on starting quarterback
OKLAHOMA STATE・10 DAYS AGO