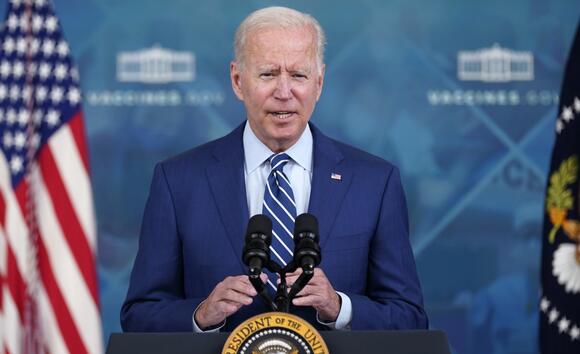 "As POTUS told ABC, ending the war in Afghanistan was in our national interest," Psaki tweeted. "He said advice was split, but consensus of top military advisors was 2500 troops staying meant escalation due to deal by the previous admin. [Defense Secretary Lloyd Austin], the Chairman [of the Joint Chiefs of Staff Mark Milley], and [U.S. Central Command Commander Gen. Frank McKenzie] all reiterated."

"These conversations are about a range of options about what the risk assessments are about," she said. "Of course, there are individuals who come forward with a range of recommendations on what the right path forward looks."

Psaki declined to elaborate on the "private conversations" the president had with his advisers but reiterated that "regardless of the advice, it’s his decision. He’s the commander in chief. He’s the president. He makes decisions about that what’s in the national interest, and he believed we should end the war."

She went so far as to say that a "core part of democracy" is the ability for advisers to "so openly and candidly offer advice."

"The president values the candid advice of the secretary of the joint chiefs and of his military advisers, as well as members of his national security team," Psaki said. "It doesn’t mean he agrees always with every component in every element of that advice, but he welcomes the candor, he welcomes the debates, and that’s the kind of president that he can [and] will continue to be."

Psaki's comments came just hours after Milley and McKenzie said in congressional testimony that they gave Biden recommendations that the U.S. maintain a troop presence on 2,500 strong to prevent the collapse of Afghan security forces and the government.

The pair added that the topic was again discussed on Aug. 25, one day before the Kabul airport suicide bombings, at which time the president's advisers reached a consensus that keeping troops in the country would lead to an escalation in violence.

Those comments appeared to run contrary to an interview Biden gave to ABC following the withdrawal, where he told George Stephanopoulos that none of his top military advisers gave any advice contrary to proceeding with his planned troop withdrawal, originally scheduled to be completed by Sept. 11 before the White House moved it up to Aug. 30.

In that interview, Stephanopoulos repeatedly pressed Biden about media leaks claiming the Pentagon was warning the president against pulling out all troops.

This is a developing story and will be updated with more information as it becomes available.

quit blaming Mr President trump .for you crimes.lies.you did it not Mr president trump. Obama. Nancy. Clinton. are running our country and White house .terrorist biden. Harris. hunter. Jim.uncle worst people ever in our white house

if it's his decisions why does he keep blaming everyone else for his crises around the globe and home front.

The White House declined to rule anything out in response to Russian advances along Ukraine's border, including some form of military action.
POTUS・2 HOURS AGO
WashingtonExaminer

President Joe Biden said Friday that he is preparing ways to halt a potential incursion into Ukraine by Russian President Vladimir Putin as Moscow masses troops along Ukraine’s border.
POTUS・6 HOURS AGO
WashingtonExaminer

White House chief of staff Ron Klain, known for his prodigious tweeting, took to the platform on Friday to promote a worse-than-expected jobs report.
POTUS・7 HOURS AGO
The Guardian

Covid: Biden says to beat Omicron variant ‘we have to shut it down worldwide’ – live

Bill to fund government through mid-February wins Senate report while US adds 210,000 jobs in November
PUBLIC HEALTH・13 MINUTES AGO

White House press secretary Jen Psaki refused to discuss previous remarks from President Biden about former President Trump which claimed "anyone who is responsible" for so many COVID-19 deaths should "not remain" in the White House. During a campaign debate last fall, Biden took a jab at then-President Trump for...
PRESIDENTIAL ELECTION・2 DAYS AGO
The Independent

China, US tussle over Biden's 'Summit for Democracy'

China and the United States are tussling over President Joe Biden’s upcoming democracy summit, which the ruling Communist Party sees as a challenge to its authoritarian ways. The party maintains China has its own form of democracy and plans to issue a report titled “China: Democracy that Works” on Saturday, five days before the opening of Biden's two-day virtual meeting with about 110 other governments. The White House pushed back Thursday against Chinese criticism of Biden's “Summit for Democracy,” after a senior Chinese official said that it divides countries and points fingers at others. White House Press Secretary Jen...
FOREIGN POLICY・19 HOURS AGO
The Independent

President Joe Biden looked out over an audience of government scientists and framed his latest plan for fighting COVID-19 as an opportunity to at last put an end to divisiveness over the virus, calling the politicization of the issue a “sad, sad commentary.” And then he tacked on a political dig.Some people “on the other team,” he said Thursday, were threatening to hold up government spending and endangering the nation’s credit out of pique over vaccination requirements.“Go figure,” he added.It was a quick aside in a Biden speech that otherwise struck a largely bipartisan tone. But it served as...
PUBLIC HEALTH・18 HOURS AGO
MarketWatch

President Joe Biden on Friday signed a bill that will keep the federal government running through Feb. 18, resolving the threat of a weekend shutdown. Washington is staring down other must-pass items, however, including raising the debt limit and an annual defense bill. Top Democrats are also aiming to pass Biden's massive social-spending and climate bill in the Senate before Christmas, though that timeline could slip.
WASHINGTON STATE・4 HOURS AGO

The president promised to "shut down" the virus, but it continues on.
PRESIDENTIAL ELECTION・19 HOURS AGO
WashingtonExaminer

The White House said Iran’s approach in the Vienna nuclear talks showed the regime was not committed to returning to the bargain that forced sharp limits on its nuclear fuel production in exchange for a lifting of sanctions.
POTUS・1 HOUR AGO
POLITICO

The president’s success in office will be tied to how he handles the pandemic. The emergence of Omicron makes that clear again.
PRESIDENTIAL ELECTION・1 DAY AGO
The Associated Press

WASHINGTON (AP) — President Joe Biden, Vice President Kamala Harris and their spouses held a “family” celebration of Hanukkah at the White House Wednesday, with the first Jewish spouse of a vice president, second gentleman Doug Emhoff, joining in lighting the menorah. Speaking to more than 150 guests, including Jewish...
POTUS・1 DAY AGO

Biden on report Trump tested positive for Covid-19 ahead of 2020 debate: 'I don't think about the former President'

With help from Daniel Lippman, Nahal Toosi, Andrew Desiderio, Bryan Bender and Phelim Kine. Send tips | Subscribe here | Email Alex | Email Quint. It’s Nov. 30: Do you know where your land mine policy reversal is?. You may recall that back in Jan. 2020, then-President DONALD TRUMP expanded...
PRESIDENTIAL ELECTION・3 DAYS AGO
investing.com

(Reuters) -U.S. President Joe Biden will nominate Shalanda Young to be director of the White House Office of Management and Budget (OMB), a source familiar with the decision said on Tuesday. Young, who currently serves as acting OMB director, must be confirmed by the Senate for the post. Biden's first...
PRESIDENTIAL ELECTION・9 DAYS AGO
WKYC

TAMPA, Fla. — White House Press Secretary Jen Psaki confirmed President Joe Biden intends to run for reelection in 2024 in response to a question Monday from a reporter. The latest talk about the president's political future comes as Biden's approval rating sits at a new low of 36% according to a recent Quinnipiac University national poll. He first said in March that it was his "expectation" he would run for office again.
PRESIDENTIAL ELECTION・10 DAYS AGO

The White House has confirmed that President Joe Biden is planning to run for re-election in 2024. What Happened: White House press secretary Jen Psaki acknowledged Biden’s plans during a Monday press conference. "That’s his intention," Psaki told reporters when queried if Biden will seek a second term. The Washington...
PRESIDENTIAL ELECTION・10 DAYS AGO
Reuters

ABOARD AIR FORCE ONE, Nov 22 (Reuters) - U.S. Federal Reserve Chair Jerome Powell underscored his commitment to putting climate change at the center of the central bank's policymaking decisions during his conversations with President Joe Biden, the White House said on Monday. Biden on Monday renominated Powell, a Republican,...
PRESIDENTIAL ELECTION・11 DAYS AGO
POLITICO

There is bipartisan support in Congress and from outside groups to slight China over the government’s human rights abuses.
SPORTS・12 DAYS AGO
Washington Post