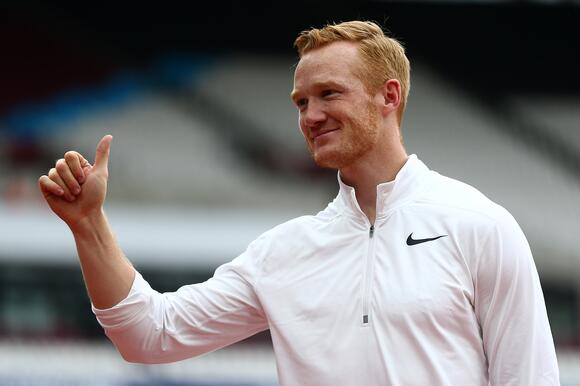 Former Olympic long jump champion Greg Rutherford has been selected for the GB bobsleigh team ahead of the Winter Olympics .

Rutherford is aiming to become the first British athlete to win a medal at both the summer and winter Olympics and the 34-year-old’s hopes have been boosted by the news, which was revealed by the Guardian , that he has been included in GB’s five-man squad.

The GB team still have to qualify for the Beijing Games, which take place in February 2022, and Rutherford will now train ahead of his competitive debut at a World Cup event in Austria in November.

The London 2012 gold medallist and Rio 2016 bronze medal winner earned his place following a series of tests at the British bobsleigh and skeleton headquarters in Bath and joins Lamin Deen, Joel Fearon, Ben Simons and Toby Olubi in the provisional squad.

Rutherford retired from athletics in 2018 and embarked on his ambition to compete at the Winter Olympics earlier this year.

In an interview with The Independent in July , Rutherford was confident that would make the team despite suffering a couple of injuries this year.

“I have no questions about the amount of power I can still produce and how strong I can be,” he said.

“I think I can be one of the strongest, if not the strongest on the team. But you need to be efficient actually moving the sled so I need to learn the technique, I need to get that absolutely nailed, and if I can then I’ll have as good a chance as anybody to make the team.”

Rutherford will be expected to compete in the four-man bobsleigh event, rather than the two-man.

London Marathon 2022: Start time, route, odds and everything you need to know

The TCS London Marathon is here with the streets of London set to be filled with spectators to cheer on around 50,000 runners. Sir Mo Farah unfortunately was forced to pull out with a hip injury, but last year’s winner winner Sisay Lemma is back, while Kenenisa Bekele also runs - the Ethipian is the only man in the field to run under 2 hours 2 minutes with Eliud Kipchoge the only man faster in history. Look out for Kenya’s Joyciline Jepkosgei in the elite women’s field, with her battle against Ethipians Yalemzerf Yehualaw and Ashete Bekere likely to...
SPORTS・11 HOURS AGO
The Independent

Novak Djokovic reached his fourth final of the season at the Tel Aviv Open with victory over Roman Safiullin.The former world number one resumed his campaign at the Laver Cup last week after missing the North American swing because of his refusal to be vaccinated against Covid-19.The Israeli tournament is low key but Djokovic has achieved his aim of playing matches and is yet to drop a set, seeing off Russian Safiullin 6-1 7-6 (3).The match became a lot more competitive after Djokovic won the opening five games, and the Serbian was unable to serve out victory in the second...
TENNIS・10 HOURS AGO
The Independent

Elliot Daly has been backed to reclaim his England place for next year’s World Cup after inspiring Saracens to a devastating 51-18 Gallagher Premiership victory over Leicester Tigers.Daly missed the summer tour to Australia and on Monday was omitted from Eddie Jones’ first training squad of the autumn, but he responded by using his acceleration, running lines and handling to spearhead a seven-try rout.Saracens director of rugby Mark McCall believes the versatile 29-year-old delivered the type of performance that will propel him back into Jones’ thinking.“Elliot had a great game, he was outstanding on the ball. He was involved in...
WORLD・10 HOURS AGO
The Independent

Bill Turnbull has been immortalised at his beloved football club after Wycombe Wanderers named part of their stadium in honour of the late TV presenter.In a pre-match tribute, stadium announcer Phil Catchpole revealed that the gantry would be christened the “Bill Turnbull Gantry” because he “loved the view up there”.A moving tribute to Bill Turnbull - with his friends and family in the room - from @bluntphil ahead of today's game.Thank you to everyone who joined us to honour a great man.#Chairboys pic.twitter.com/n6qUwfj4F8— Wycombe Wanderers (@wwfcofficial) October 1, 2022The broadcaster, who often commentated on Wycombe Wanderers games, passed away aged...
PREMIER LEAGUE・8 HOURS AGO

Commit to tackling or forget about an England call-up, warns Eddie Jones

Eddie Jones has reacted to the new Gallagher Premiership season being launched with a glut of tries by warning his England players they will be dropped if they are vulnerable in defence.The opening three rounds of the competition have seen the whitewash breached 141 times, but Jones sees danger in this attacking success as he plans for an autumn campaign that includes Tests against New Zealand and South Africa.Backs in particular have been told that they neglect a critical element of the game in pursuit of tries at their peril.“The commitment to make a tackle is important in rugby and...
RUGBY・10 HOURS AGO