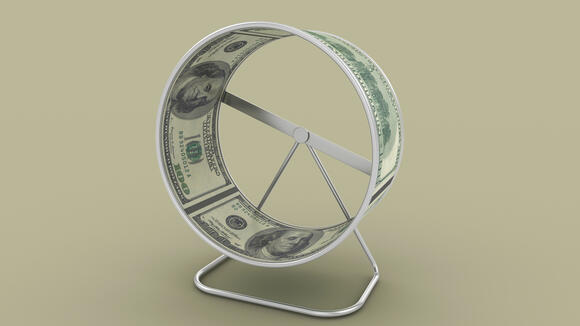 Wall Street traders often caution retail investors about getting in over their heads . But it hasn’t been a problem for Mr. Goxx – in spite of the fact that he’s only about 6 inches tall standing on his hind legs.

See: 8 Best Cryptocurrencies To Invest In for 2021
Find: Here’s How Much You Need To Earn To Be ‘Rich’ in 23 Major Countries Around the World

Mr. Goxx is a hamster who has been day trading cryptocurrency and live streaming it on the social network Twitch, presumably with the help of his anonymous human business partner. His partner also helps keep his office clean and supplies him with daily vegetables for energy.

Goxx doesn’t actually use the computers for trading (as far as we know). Instead, he runs on his treadmill to choose one of 30 different cryptocurrencies, according to a Vice article. Then, he chooses a tunnel: One tunnel means “buy,” and the other means “sell.” Once he’s made his choice, he’s locked out of the tunnels for 20 seconds, so that he doesn’t accidentally sell what he just purchased.

You’re probably wondering how he’s doing. As with most retail investors, he’s had good times and bad. In July, just a month after he started trading, he was showing a loss of 7%. But yesterday, Goxx reported via Twitter that he was up 19.41%. Vice said these returns outperform the stock market for the past three months. The hamster started with $381 USD, and trades in €20 increments, or about $23 USD.

Just for the record, his portfolio has outpaced Cathie Wood’s ARK Innovation and Warren Buffett’s Berkshire Hathaway in the past few months. Some of Goxx’s favored investments, it would seem, include TRON, which he’s refused to sell every time it’s come up on his wheel — he has purchased the asset five times since June and is up 40% on the crypto. He’s also done well with Ethereum and Bitcoin, according to a Protos.com article.

In spite of his recent success, the entrepreneurial rodent isn’t banking on day trading alone to keep him in hamster treats. He recently introduced The Founder’s Token, the first original Mr. Goxx NFT art. Goxx said in a video on Twitter that he’s looking to fund “a new wing for the Goxx Capital Headquarters” through sales of the NFT. The hamster said he plans to autonomously create and mint his own NFT art in the future .

It is our responsibility to point out that Mr. Goxx, his content and his endeavors are for entertainment purposes only and no one should build a portfolio around a hamster’s investment choices.

The Dangers of Day Trading

In its simplest form, day trading involves buying and selling a security within the same day. In reality, many day traders make multiple trades per day, sometimes in numerous securities. Money:...
MARKETS・2 DAYS AGO
GOBankingRates

Warren Buffett is quite possibly the greatest investor of all time. For decades, the CEO of Berkshire Hathaway -- nicknamed the "Oracle of Omaha" -- has shown his ability to read Wall Street like a...
MARKETS・2 DAYS AGO
MarketWatch

On Friday, Federal Reserve Chair Jerome Powell noted that he had concerns about higher inflation.
BUSINESS・1 DAY AGO

The Tesla CEO's wealth is even more notable when compared with other famous billionaires.
NEW YORK CITY, NY・1 DAY AGO
Markets Insider

During an appearance at the Milken Institute conference, Wood also revealed what she thinks will be the "big, new frontier" in investing.
STOCKS・1 DAY AGO
Markets Insider

ARK's Cathie Wood Is Not Sold on Crypto Futures ETF — Will She Start Her Own?

Florida investment management firm ARK Invest is a bullish investor in Bitcoin and all things cryptocurrency. However, the fund's manager does not seem keen on the first ETF based primarily on Bitcoin futures—at least not yet. Managing over $50 billion of assets, founder Cathie Wood hasn't been nicknamed "Money Tree"...
STOCKS・1 DAY AGO

If you owned a $1,000 stake in Berkshire Hathaway when Warren Buffett became the company's CEO more than a half-century ago and held on to your position, you would now own stock worth roughly $22.6 million. While matching that kind of incredible performance over the next 50-plus years is likely out of reach due to the investment conglomerate's already massive size, the company's performance under Buffett's tenure should make it clear why the famous investor is sometimes referred to as the Oracle of Omaha.
STOCKS・2 DAYS AGO
newmilfordspectrum.com

How many entrepreneurs are as confident now as they were before the Covid-19 pandemic began? Yes, we know the majority of the S&P 500 are companies that began in down markets. And yes, the best entrepreneurs intuitively use hard times to lean in and listen even harder to their market and customers, innovating where necessary and making their companies more resilient than ever before.
BUSINESS・2 DAYS AGO
The Motley Fool

Unity Software benefits from the growing demand for interactive content. Tesla is the world's premiere electric vehicle maker, and should retain that position for years to come. Sea Limited is expanding rapidly in three lucrative business segments: digital entertainment, e-commerce, and fintech. Although the once white-hot returns of investing guru...
STOCKS・2 DAYS AGO
MarketWatch

Also, how Elon Musk can become a trillionaire, Tesla's great results and a surprising retirement destination.
STOCKS・1 DAY AGO

Cathie Wood, the founder and chief investment officer at Ark Invest, is holding off on investing in the ProShares Bitcoin Strategy ETF (NYSE:BITO), which began trading on Tuesday. What Happened: Speaking at the Milken Institute Global Conference, Wood told Bloomberg that one of the reasons Ark Invest hasn’t invested in...
STOCKS・2 DAYS AGO
The Motley Fool

Profits are what drive stock performance in the long term. Square, Roku, and Teladoc have grown their respective gross profits at an eye-popping pace in the past. Between improving profit margins and ongoing revenue growth, all three companies look poised to beat the market from here. This article is about...
STOCKS・3 DAYS AGO
Fareeha Arshad

Mr Goxx, the crypto-trading hamster is a better investor than you and your investor buddy from the office.

Everybody is into cryptocurrency these days. Most people you meet are buying either one or the other form of cryptocurrencies. It's evident why anybody would want to invest in them - the return, which may be great. Yet, like any other investment opportunity, it's tough to predict how your investment is going to play out. And this is where Mr Goxx comes into the picture.
2 DAYS AGO
24/7 Wall St.

Here's a look at what the ARK Invest exchange-traded funds bought on October 21, 2021.
STOCKS・2 DAYS AGO
Markets Insider

Berkshire has been an American Express shareholder for over 25 years, and its stake has grown from 11% to 19% thanks to share buybacks.
STOCKS・4 DAYS AGO
The Motley Fool

Riding the Oracle of Omaha's coattails has been a profitable move for decades. These companies are time-tested, highly-profitable key players in their respective industries. There are no shortage of successful investors, but few can hold a candle to billionaire Warren Buffett's track record. Since the Oracle of Omaha took over...
STOCKS・5 DAYS AGO
24/7 Wall St.