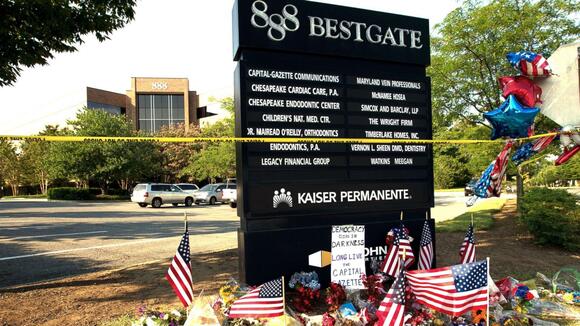 Jarrod Warren Ramos, the gunman who killed five Capital Gazette employees in June 2018, was sentenced Tuesday to life in prison without the possibility of parole.

Anne Arundel County Judge Michael Wachs handed down the sentence of five consecutive life sentences to be served without the chance for parole, bringing an end to the long, legal battle. Ramos did not make a statement in court.

He was also sentenced to an additional life in prison plus 345 years, all to run consecutively, Anne Arundel County State Attorney's office said in a statement .

Family members of victims and survivors of the shooting spoke during the emotional hearing.

“There were days I wondered why I lived, but I lived to tell the truth. No shooter could kill this paper. You can’t kill the truth,” Selene San Felice, a reporter who survived the shooting, said to Ramos at the hearing, Maryland news radio station WBAL reported.

Judge Wachs said that Ramos showed no remorse for his crimes and told a state psychiatrist he’d kill more if he were ever released.

“The impact of this case is just simply immense,” Wachs said, Associated Press reported. “To say that the defendant exhibited a callous and complete disregard for the sanctity of human life is simply a huge understatement.”

Prosecutors said revenge was Ramos' motivation for the shooting.

Ramos had accused the Capital Gazette of destroying his reputation when it covered his misdemeanor harassment conviction in 2011. He was accused of harassing a former female high school student and filed several lawsuits against the newspaper, which were dismissed by the courts.

SANTA FE, N.M. (AP) — Hours before actor Alec Baldwin fired a fatal gunshot from a prop gun that he had been told was safe, a camera crew for the movie he was filming walked off the job to protest conditions and production issues that included safety concerns. Disputes in...
SANTA FE, NM・1 DAY AGO
NBC News

"Rust" film director Joel Souza, who is recovering after being shot with a prop gun fired by producer and actor Alec Baldwin on Thursday while filming, said he is "gutted by the loss of my friend and colleague" cinematographer Halyna Hutchins who was killed as a result of the same film set accident.
MOVIES・17 HOURS AGO
Reuters

NEW YORK, Oct 21 (Reuters) - The Pfizer (PFE.N)/BioNTech COVID-19 vaccine showed 90.7% efficacy against the coronavirus in a clinical trial of children 5 to 11 years old, the U.S. drugmaker said on Friday. Sixteen children in the trial who had received a placebo got COVID-19, compared with 3 who...
MEDICAL & BIOTECH・1 DAY AGO
Reuters

CHICAGO, Oct 22 (Reuters) - Americans this week were handed a big decision when it comes to getting a COVID-19 vaccine booster. The U.S. Centers for Disease Control and Prevention (CDC) on Thursday said individuals who qualify could choose a different vaccine from the one they received for their initial inoculation.
PHARMACEUTICALS・1 DAY AGO

Supreme Court Justice Sonya Sotomayor called the high court’s refusal to once again block Texas’s six-week abortion law “catastrophic.”. The court agreed to review Senate Bill 8 on an expedited basis in response to legal challenges from the Justice Department and abortion providers on Nov. 1. However, the court did not halt enforcement of the law.
TEXAS STATE・22 HOURS AGO
The Associated Press

ATLANTA (AP) — Led by an unlikely hero, the Atlanta Braves are heading back to a place that used to be so familiar to them. Eddie Rosario capped a remarkable NL Championship Series with a three-run homer, sending the Braves to the biggest stage of all with a 4-2 victory over the defending champion Los Angeles Dodgers on Saturday night.
MLB・6 HOURS AGO
Reuters

Turkey to expel U.S. envoy and nine others, Erdogan says

ISTANBUL, Oct 23 (Reuters) - Turkish President Tayyip Erdogan said on Saturday that he had told his foreign ministry to expel the ambassadors of the United States and nine other Western countries for demanding the release of philanthropist Osman Kavala. Seven of the ambassadors represent Turkey's NATO allies and the...
U.S. POLITICS・15 HOURS AGO
ABC News

The contaminated spray was sold at about 55 Walmart stores.
FOOD SAFETY・1 DAY AGO