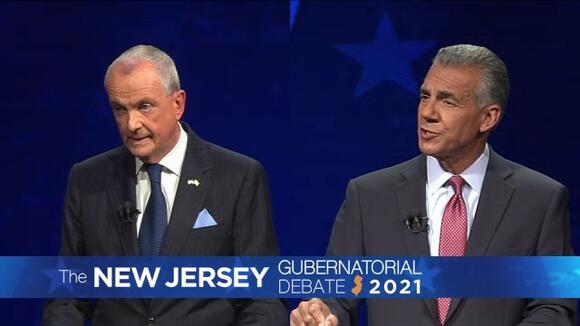 New Jersey Democratic Gov. Phil Murphy and Republican Jack Ciattarelli sparred in an at-times testy and raucous debate Tuesday in the first of two meetings in this year's campaign for governor. Murphy, a first-term Democrat, and Ciattarelli, a former GOP Assembly member, met at the New Jersey Performing Arts Center in Newark in a debate interrupted continuously by cheers and boos from the audience despite pleas from moderators. Murphy's handling of the COVID-19 outbreak took center stage early on, specifically his management of the pandemic in nursing homes, which account for roughly a third of the state's 27,000 deaths. Ciattarelli criticized Murphy's order in early 2020 requiring nursing home residents to return from hospitals regardless of their COVID-19 status. Murphy defended the order, as he has for months, saying the facilities were the residents homes and management was required to keep returning residents separate from other residents. Murphy pivoted quickly, though, to mask and vaccine mandates, which his opponent has been skeptical of. "Saying that it's your call and government can't mandate a vaccine or no masking is akin to drunk driving," Murphy said. "It impacts the person whose driving drunk and all of us." The governor also attacked Ciattarelli for saying that whether people get the vaccine is up to them. Murphy has mandated the vaccine or regular testing in a number of industries in the state, including health care, schools and day cares. Ciattarelli said he has been vaccinated and thinks people should get vaccinated, but he draws a distinction at what government should be requiring. "Do I believe government has a right to tell people that they have to take a medicine?" He said. "No." On whether young children should wear masks in schools, Ciattarelli said it should be up to parents. Murphy has signed an executive order requiring masking in day cares, as well as in the state's schools. Ciattarelli said he agreed, though, with Murphy's requiring teachers to get vaccinated or undergo testing. People should have a choice, he said. Packed into an hourlong debate were seemingly endless clashes. There was little the candidates found common ground on - except they both praised the diversity of the state. On taxes: Ciattarelli repeated a campaign-long criticism of Murphy that seized on a clip of him saying that "if taxes are your issue, then we're probably not your state," saying the comment was disqualifying in a state like New Jersey leads the nation in property tax rates. WATCH | The candidates pledge not to raise taxes:

Phil Murphy and Jack Ciattarelli answer a critical question about whether or not they will raise taxes in the next four years.

Murphy cast the election repeatedly as a question of "continuing to move forward" or going back, an allusion to former GOP governor Chris Christie as well as former President Donald Trump. He touted the hike in taxes on those making more than a $1 million a year on his watch, an increase in school aid and the state fully funding public workers' pensions. He also pledged that if reelected he would not raise taxes again. Ciattarelli wasn't alone in labeling actions disqualifying. Murphy said a Jan. 6 rally, in which clips show Ciattarelli speaking in front of someone holding a "Stop the Steal" sign made Ciattarelli unfit for office. Ciattarelli has said he didn't know the event was being held in support of Trump's false contention that the 2020 election was stolen. On Tuesday, he acknowledged that Biden was the president and said Trump's rhetoric led to the Capitol insurrection that same day. WATCH | Candidates address 'Stop the Steal' during debate:

Things got fiery after Phil Murpy and Kack Ciattarelli about former President Donald Trump and his "Stop the Steal" movement.

On abortion, Murphy pointed to Ciattarelli's votes in the Assembly against funding women's health services, including for Planned Parenthood. He said his opponent wanted to turn New Jersey into Texas. Ciattarelli disavowed the Texas law and said he supports Roe v. Wade, but not late-term abortions. On gun control, Ciattarelli contended that Murphy would probably like to end the 2nd Amendment. Murphy protested, but touted laws he signed to tighten the state's gun laws, red-flag legislation and a bill that limits magazine clips to 10 rounds. Murphy is trying to become the first Democrat in 44 years to win reelection and to buck a trend going back to 1985 that has seen the party of the president lose the New Jersey governorship. Ciattarelli faces headwinds of his own. Down by double digits in publicly available polls, he faces a Democratic registration advantage of 1 million more voters. He's also not a universally known figure in the state. WATCH | Ciattarelli gives closing statement

Ciattarelli is a former state Assembly member and the founder of a medical publishing company. He has an accounting background and hinges his campaign around affordability, arguing New Jersey's taxes are too high. Becoming governor is Murphy's first elected political position. He's served as Barack Obama's ambassador to Germany and before that was an executive at Goldman Sachs. New Jersey will have early in-person voting from Oct. 23-31. Election Day is Nov. 2. The debate was produced by New York and Philadelphia ABC affiliates, along with Twitter, Univision, WBGO radio, NJ.com and Rutgers Eagleton Institute of Politics. A second, final debate will be Oct. 12. WATCH | Murphy gives closing statement

Murphy got called out for quite a few lies, and was called out numerous times for trying to paint his opponent into positions that were not his in his attempts to fear monger. Plus, when a guy has the highest budget in the history of the state, hikes spending by 35%, and still wants more money, I can't believe him when he says that he will not impose new taxes and raise existing taxes. Murphy's running on lies, and it's obvious. Every time he got caught, he switched over to "diversity, diversity, diversity".

First Lady Jill Biden is set to campaign Friday for Democrats in governors' races in Virginia and New Jersey, trying to boost the party's political fortunes in her most overt way since arriving at the White House nine months ago.
PRESIDENTIAL ELECTION・1 DAY AGO
ABCNY

Brooklyn Borough President Eric Adams said in an interview on CNN on Friday that de Blasio can't get rid of the program in the nation's largest school district until next year, when a new mayor is in place. Adams said he would preserve the program and expand it.
NEW YORK CITY, NY・1 DAY AGO
ABCNY

A federal judge in Utica sided with 17 health care workers who object to New York State's vaccine mandate for health workers on religious grounds. Governor Kathy Hochul said the decision has an "impact on our ability to help people."
NEW YORK CITY, NY・3 DAYS AGO
ABCNY

National Institute of Health says their research indicates Moderna's booster shot was most effective for people who originally got the Johnson & Johnson shot.
NEW YORK CITY, NY・2 DAYS AGO

A lawyer representing teachers against mandatory vaccinations told a three-judge appellate court that they should not be forced from their classrooms.
NEW YORK CITY, NY・2 DAYS AGO
ABCNY

There are renewed calls for action to stop the violence on the streets of New York City.
NEW YORK CITY, NY・3 DAYS AGO
ABCNY

The Biden administration is preparing for if and when the FDA authorizes COVID vaccines for kids ages 5 to 11, purchasing 65 million Pfizer pediatric vaccine doses.
NEW YORK CITY, NY・3 DAYS AGO
ABCNY

Eric Adams, Curtis Sliwa trade barbs in race to be NYC's next mayor

Both candidates in the race to be New York City's next mayor -- Eric Adams and Curtis Sliwa -- were out on the campaign trail Tuesday
NEW YORK CITY, NY・4 DAYS AGO

There have so far been no reports of major backups at the Port of Newark, but Gov. Phil Murphy says that could change.
NEWARK, NJ・3 DAYS AGO
ABCNY

COVID cases in students are higher on Long Island than anywhere else in New York State, according to data from the New York State Department of Health.
NASSAU COUNTY, NY・2 DAYS AGO
ABCNY

The NYPD is about to swear in its newest officers Friday, and the four-legged recruits and their dog-loving handlers are all the buzz.
NEW YORK CITY, NY・2 DAYS AGO
ABCNY

NEW YORK -- Lawyers opened the trial of an associate of Rudy Giuliani on Wednesday with plenty of talk about $1 million from a Russian financier that prosecutors contend was aimed at illegally influencing U.S. politicians, but there was little mention of Giuliani and other prominent political figures whose names will arise later in the trial.
NEW YORK CITY, NY・3 DAYS AGO

Lev Parnas once pitched himself in TV interviews and through an unorthodox publicity campaign by his lawyer as someone who could expose corruption in the Trump Administration over its dealings in Ukraine.
NEW YORK CITY, NY・4 DAYS AGO
ABCNY

A federal judge in Manhattan on Tuesday declined to block enforcement of New York City's vaccine mandate for public school employees, denying a request for a preliminary injunction from a group of 10 teachers.
NEW YORK CITY, NY・4 DAYS AGO
ABCNY

As usual, politics on display at NYC Columbus Day Parade

The in-person Columbus Day Parade returned to New York City Monday, and like every year -- no matter if there's an election -- the event was heavy on the politics.
NEW YORK CITY, NY・5 DAYS AGO