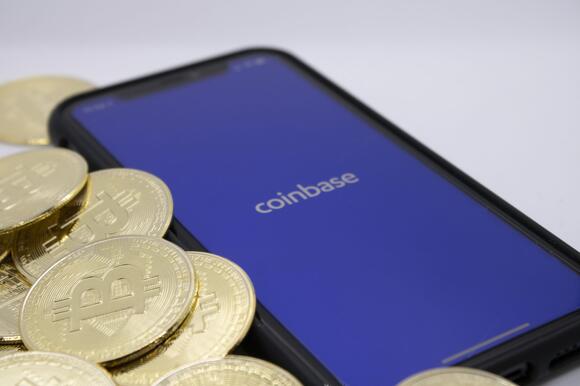 Coinbase has been in the news lately for getting on the wrong side of both customers and regulators , but the cryptocurrency exchange made a different kind of headline on Monday when it said users in the United States will now be able to deposit their paychecks directly into their online accounts.

See: Best Cryptocurrencies to Invest In for 2021
Find: 25 Best Startup Business Ideas to Make Money in 2021

The announcement appeared on a blog by Max Branzburg, Coinbase’s vice president of product . He said the feature will be launched in the “coming weeks” but did not specify an exact date. Customers can get paid in crypto or U.S. dollars and choose any percentage of their paychecks to deposit.

“With direct deposit, customers can more easily access our crypto-first financial services and be ready for any trade or purchase,” Branzburg wrote.

He also announced that starting this week, holders of the Coinbase debit card will be able to spend U.S. dollars as well as crypto while earning crypto rewards. Another new feature is that customers can now earn new rewards in three coins: 1% back in Dai (DAI) or 4% back in Amp (AMP) or Rally (RLY). The card already allowed them to earn 1% back in Ethereum (ETH), Dogecoin (DOGE) or Bitcoin (BTC), or 4% back in The Graph (GRT) and Stellar (XLM).

See: Top 10 Most Expensive Shoes Ever Made
Find: How to Use The Child Tax Credit Direct Deposit Portal

The launch at least temporarily takes the focus off of a recent string of bad news, including customer complaints that frequent transfers from their bank accounts to Coinbase are time-consuming and inconvenient, CNBC reported.

That’s not the only complaint lodged against Coinbase, which went public in April and boasts more than 68 million users in over 100 countries. As previously reported by GOBankingRates, the platform has received thousands of complaints in recent years for a pattern of account hacks where users have reported money vanishing from their accounts. Customers have also griped about poor customer service when they try to contact Coinbase support.

See: 29 Careless Ways Retirees Waste Money
Find: Stimulus Update — States Give Out Thousands of Bonus $1,000 Checks — Will You Get One?

Meanwhile, earlier this month, Coinbase went into defense mode against federal regulators when it was threatened with legal action by the Securities and Exchange Commission over the exchange’s proposed loan product, Coinbase Lend. As GOBankingRates reported, Coinbase received a Wells notice from the SEC indicating that it intends to sue the company over the product.

The first Bitcoin futures exchange-traded fund (ETF) started trading today on the New York Stock Exchange, in what several experts see as a major win for the crypto industry both from a regulatory...
STOCKS・17 HOURS AGO
GOBankingRates

Savings Has Grown by $2.7 Trillion Worldwide — How It’s Affected Spending Habits for Better (and Worse)

European and American consumers are preparing for the worst by stashing away more than $2.7 trillion in savings. While European bank balances may have gone down slightly in August following lifted...
BUSINESS・1 DAY AGO
KYW News Radio

Latest stimulus check for parents hits bank accounts - did you get yours?

More stimulus money dropped last week as the latest payment from the American Rescue Plan Act was doled out to parents across the country. The legislation beefed up the nation’s child tax credit to $3,600 for every child below the age of six, and $3,000 for children ages 6-17. These credits began hitting parents’ bank accounts through direct deposit or mailboxes via written checks in July, and the monthly installments continue through the end of the year.
INCOME TAX・18 HOURS AGO

Opinion: Someone deposited $70,000 into my account and now I'm banned from banking

A weird deposit took the convenience of banking away from me.
CHULA VISTA, CA・13 HOURS AGO
Business Insider

Billionaire crypto investor Mike Novogratz has voiced concerns that current NFT valuations are 'not normal in any way, shape or form' - here are 3 signs that there's a digital art bubble right now

The move is setting up a conflict between Chair Gary Gensler and investor advocates who are his long-time allies.
MARKETS・22 HOURS AGO
crossroadstoday.com

Experiencing an overdrawn bank account can be stressful. Since banks can charge an overdraft fee multiple times a day, fees can add up quickly, piling on to the negative balance and the stress. The consequences of overdrawing can be serious, so it’s essential to fix your account as soon as...
CREDITS & LOANS・14 HOURS AGO

A widely followed analyst says that one crypto will manage to outperform Bitcoin (BTC) and four big-name altcoins during this bull cycle. The pseudonymous crypto analyst known as Capo tells his 180,000 Twitter followers that Bitcoin dominance, which is Bitcoin’s market cap compared to the rest of the crypto market, looks to be trending higher, but will likely hit a hard resistance at the 50.00 level.
MARKETS・1 DAY AGO
Interesting Engineering

Bitcoin's continued growth in recent weeks has sent many enthusiasts declaring this moment as history in the making, and on Tuesday, October 19, they will be vindicated. ProShares is launching a long-awaited exchange-traded fund (ETF) on the New York Stock Exchange tied to Bitcoin futures, according to an initial report from The New York Times.
MARKETS・1 DAY AGO
dailyhodl.com

A popular crypto analyst and trader is predicting major rallies for Bitcoin and two large-cap altcoins as the crypto markets continue to flash signs of strength. The pseudonymous trader known as Inmortal sees Bitcoin (BTC) showing signs that it is gearing up for a parabolic move. According to Inmortal, the current price action is reminiscent of BTC’s consolidation in late 2020 before the king crypto launched a massive move from around $26,000 to $42,000.
MARKETS・1 DAY AGO
finextra.com

HSBC is working with Oracle NetSuite to launch a Banking-as-a-Service (BaaS) offering that will enable customers to create and provide business banking services through their own platforms. The two firms will embed international payments and expense management services into NetSuite’s new SuiteBanking offering. This means that NetSuite customers will be...
BUSINESS・18 HOURS AGO
MarketWatch

Grayscale Bitcoin Trust rises 2.4% as largest bitcoin fund says it has formally kicked off plan to convert into an ETF

Grayscale Investments said on Tuesday that it has formally applied with the Securities and Exchange Commission to convert its Grayscale Bitcoin Trust into an exchange-traded fund that is pegged directly to the world's No. 1 digital asset rather than focus on creating a futures-linked ETF. The announcement comes as The ProShares Bitcoin Strategy ETF began trading on Tuesday under the ticker "BITO" on the New York Stock Exchange as a futures-linked ETF, which is being hailed as a major milestone in crypto. GBTC's aim to convert its trust, would allow the largest bitcoin product to retain its dominance...
STOCKS・23 HOURS AGO
WREG

As Bitcoin goes mainstream, Wall Street looks to cash in

NEW YORK (AP) — Love cryptocurrencies or hate the very idea of them, they’re becoming more mainstream by the day. Cryptocurrencies have surged so much that their total value has reached nearly $2.5 trillion, rivaling the world’s most valuable company, Apple, and have amassed more than 200 million users. At that size, it’s simply too […]
STOCKS・20 HOURS AGO
ABC News

The Biden administration on Tuesday backed down on a controversial proposal to direct the IRS to collect additional data on every bank account that sees more than $600 in annual transactions, after widespread criticism from Republican lawmakers and banking industry representatives, who said the tax enforcement strategy represented a breach of privacy by the federal government.
INCOME TAX・15 HOURS AGO
pymnts

Coinbase is rolling out the availability to transfer ARPA Chain, Bounce and Perpetual Protocol into users’ Coinbase Pro accounts, according to a company blog post. This update, which commenced trading on Tuesday (Oct. 19), is a response to customers requesting the ability to trade more assets on the platform. With the listing process, Coinbase says it should also add more assets to the platform with time.
TECHNOLOGY・11 HOURS AGO
NBC Philadelphia

Investing consistently in cryptocurrency just got a lot easier. In September, Coinbase announced that its users will soon be able to set up direct deposit with any percentage of their paychecks and can choose for the money to be deposited as U.S. dollars or any of the more than 100 cryptocurrencies available at the exchange, with no fees.
MARKETS・6 MINUTES AGO
theridgewoodblog.net

Washington DC, Democrats are facing a firestorm of criticism over a proposal to increase the amount of bank account information reported to the IRS, posing a challenge as they craft their wide-ranging social spending bill. the staff of the Ridgewood bog. Ridgewood NJ, according to the FBI , Cybercriminals Utilize...
RIDGEWOOD, NJ・2 DAYS AGO
24/7 Wall St.

On the eve of the first U.S. Bitcoin ETF, some cryptocurrency companies were trading higher, even though the impact on them may be negligible.
STOCKS・1 DAY AGO