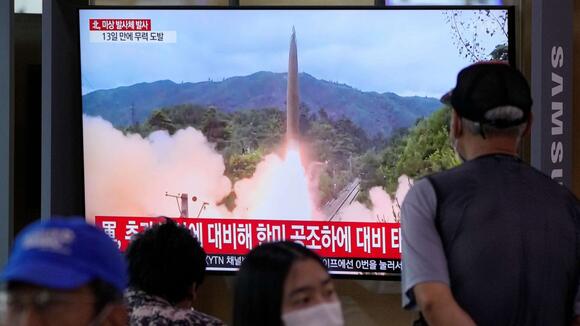 North Korea fired a short-range missile toward the East Sea early Tuesday, according to its neighboring countries, South Korea and Japan, marking the third such weapons test this month.

Military officials in Seoul, Tokyo and Washington, D.C. were investigating whether the latest missile was ballistic and if it was launched from a submarine. A ballistic missile launch would violate United Nations Security Council resolutions that ban North Korea from engaging in any ballistic activities, though the council typically doesn't slap new sanctions on Pyongyang for testing short-range weapons.

"The missile was fired from the North's Mupyong-ri in Jagang Province eastward at around 6:40 a.m," South Korea's Joint Chiefs of Staff told reporters on Tuesday. "South Korean and U.S. intelligence authorities are analyzing the launch for additional information."

There was "no report of damage to Japan's aircraft or sea vessels," according to Japanese Chief Cabinet Secretary Katsunobu Kato.

"North Korea's missile launches pose a serious threat to the safety of our nation and the stability of the region," Kato said during a press conference on Tuesday morning.

Japanese Prime Minister Yoshihide Suga told reporters on Tuesday that his "government is on high alert and monitoring the situation."

A spokesperson for the U.S. Department of State condemned the latest weapons test, calling it a "violation of multiple U.N. Security Council resolutions" -- a tacit acknowledgment that the United States believes the missile was in fact ballistic.

"We remain committed to a diplomatic approach to the DPRK and call on them to engage in dialogue ,” the spokesperson told ABC News in a statement early Tuesday, using the acronym for North Korea's official name, the Democratic People’s Republic of Korea.

During a press briefing on Monday, State Department deputy spokesperson Jalina Porter told reporters that the U.S. government is "prepared to meet with the DPRK without preconditions, and we certainly hope that the DPRK will respond positively to our outreach."

Tuesday's missile launch happened an hour after North Korea's ambassador to the U.N., Kim Song, delivered remarks at the 76th session of the U.N. General Assembly in New York City, during which he attempted to justify his country's development of a "war deterrent" to defend against threats from the U.S. and other rivals.

“What we mean by the war deterrent is literally the righteous right to self-defense that can deter aggressive war and defend ourselves," Kim said. “The possible outbreak of a new war on the Korean Peninsula is contained not because of the U.S.’s mercy on the DPRK, it is because our state is growing a reliable deterrent that can control the hostile forces in an attempted military invasion."

"North Korea is deliberately offering a condition that the U.S. and South Korea cannot accept so that when negotiations fall apart, they can blame their counterparts," Moon told ABC News on Tuesday. "As preconditions to resume inter-Korean talks, North Korea told South Korea in a statement last Saturday to consider their missile development as a reasonable act of self deterrence."

North Korea has been sending mixed messages this year. While test-firing a variety of missiles, Kim Yo Jong, the politically powerful sister of North Korean leader Kim Jong Un, has hinted that Pyongyang is ready to engage in talks with South Korea and formally declare an end to the Korean War.

"South Korea must not try to upset the balance of military force on the Korean Peninsula with such illogical and childish absurd assertion just as the U.S. does," she was quoted as saying on Saturday by North Korean state media. "I only hope that the South Korean authorities' moves to remove the tinderbox holding double standards bereft of impartiality, the hostile policy toward the DPRK."

But Cha Du-hyeogn, an analyst at the Asan Institute for Policy Studies, an independent, non-profit think tank in Seoul, doubted Pyongyang's will to come back to the negotiation table.

"North Korea never said they are willing to resume talks without conditions," Cha told ABC News on Tuesday. "The consecutive statements followed by missile provocations can be seen as a double-sided strategy."

Cha added that Kim Yo Jong is pushing South Korea to convince the U.S. to lift sanctions if the South is so eager to resume dialogue.

"It's an attempt to incapacitate the U.S.-South Korea cooperation by making use of national, or inter-Korean, cooperation," he said.

Yang Moo-jin, a professor at the University of North Korean Studies in Seoul, said Pyongyang "is not only testing its missile but also the South Korean government."

"Pyongyang will wait to see what South Korea has to say about the missile experiment," Yang told ABC News on Tuesday, "after Kim Yo Jong insisted that South Korea get rid of the double standards on North’s weapons tests if they want inter-Korean dialogue."

NKorea slams US for supporting Taiwan in nod to ally China

North Korea on Saturday accused the Biden administration of raising military tensions with China through its “reckless” backing of Taiwan and said that the growing U.S. military presence in the region constitutes a potential threat to the North. In comments carried by state media, North Korea Vice Foreign Minister Pak Myong Ho criticized the United States for sending warships through the Taiwan Strait and providing Taiwan with upgraded weapons systems and military training.The United States’ “indiscreet meddling” in issues regarding Taiwan, which the North sees as entirely a Chinese internal affair, threatens to touch off a “delicate situation...
WORLD・1 DAY AGO
Business Insider

North and South Korea are both showing off new weapons, but they're trying to send very different messages

North Korea has announced that it successfully tested a new, smaller submarine-launched ballistic missile, or SLBM, on Tuesday. State media claimed the missile — launched from the same submarine from which Pyongyang tested its first Pukguksong-1 SLBM in August 2016 — has "advanced control guidance technologies, including flank mobility and gliding skip mobility," designed to make it harder to track and intercept.
MILITARY・2 DAYS AGO
New York Post

A US diplomat urged North Korea to end its test-firing of missiles and return to the weapons talks, saying the launches are “counterproductive” to denuclearizing the Korean peninsula. Sung Kim met with South Korea officials about President Kim Jong Un’s recent missile tests and told reporters on Sunday that the...
U.S. POLITICS・4 HOURS AGO
NBC News

Two hypersonic missile tests conducted by the Chinese military over the summer have left U.S. officials both perplex and perturbed about Beijing's development of "a new generation of arms," the Financial Times reported on Wednesday. In separate reports this week, the paper documented what its government sources suggested were unexpected...
WORLD・3 DAYS AGO
realcleardefense.com

On Tuesday, footage hit the web of North Korean troops performing a variety of unusual “feats of strength” and similar displays of physical prowess before a packed crowd and the nation’s leader, Kim Jong Un. Videos of the sort aren’t out of the ordinary for North Korea, or even for more developed nations like China, Russia, and arguably even the United States.
MILITARY・10 DAYS AGO
hngn.com

Kim Yo Jong, North Korea's supreme leader Kim Jong Un's sister, said on Sunday that an inter-Korean meeting may be discussed if mutual respect is developed. According to NHK World, she feels that a seamless understanding between North and South Korea can only be reached if impartiality and mutual respect are maintained.
WORLD・27 DAYS AGO
Newsweek

Two hypersonic missile tests conducted by the Chinese military over the summer have left U.S. officials both perplex and perturbed about Beijing's development of "a new generation of arms," the Financial Times reported on Wednesday. In separate reports this week, the paper documented what its government sources suggested were unexpected...
MILITARY・3 DAYS AGO

It’s Time for Biden to End the Korean War

Tuesday’s reported ballistic missile launch by North Korea near the city of Sinpo will likely dominate U.S. news in the coming days. Virtually all analysis will focus on North Korea’s growing military threat, rather than its cause. Yet the real action has been the flurry of diplomatic activities in recent weeks, which, if successful, will be far more consequential than Pyongyang’s missile tests.
MILITARY・4 DAYS AGO
The Independent

The news that Emily Lawson is returning from 10 Downing Street to run the government’s vaccination programme ought to be doubly worrying for Boris Johnson. She is the civil servant who won praise for her management of the successful vaccine rollout this year, and who was appointed to head the new No 10 delivery unit – responsible for chasing up the delivery of the government’s manifesto promises.
HEALTH・19 HOURS AGO
The Associated Press

BOGOTA, Colombia (AP) — Colombian security forces have captured the country’s most wanted drug trafficker, a rural warlord who stayed on the run for more than a decade by corrupting state officials and aligning himself with combatants on the left and right. President Iván Duque likened the arrest Saturday of...
PUBLIC SAFETY・18 HOURS AGO
realcleardefense.com

Less than a day after President Joe Biden said the United States would come to Taiwan's defense if China were to launch an attack on the territory, one of the Communist Party's leading propaganda organs is calling the president's bluff. The Global Times, a Communist Party mouthpiece closely tied to...
FOREIGN POLICY・1 DAY AGO

A Virus Considered Eradicated in 2019 Just Made a Comeback

Trying to contain the polio epidemic in New York (1916)Polio Eradication. Our world has seen pandemics and epidemics since our world started to become more and more populated, however, every major medical catastrophe we somehow managed to get through. The Black Death came and went, so did the Spanish Flu, but there is a virus that is very notorious in our history for it being present for many years. Just as we thought that we managed to eradicate it from the face of this planet, it has come back yet again during this current pandemic, as if things weren’t bad enough.
21 HOURS AGO
Business Insider

Ex-soldiers offered mercenaries $10,000 a week to join a private army that would fight in Yemen's civil war, prosecutors says

The German nationals tried to recruit up to 150 men, including ex-cops and soldiers, to join the private army to fight Houthis Shia militants.
MILITARY・9 HOURS AGO
MarketWatch

This couple retired in Colombia on $4,000 a month. In California, ‘to live this lifestyle, we’d have to be mega, mega millionaires’

This adventure-seeking couple has lived in Panama, Colombia and is eyeing Spain in a few years.
CALIFORNIA STATE・1 DAY AGO
Newsweek

President Joe Biden stirred controversy Thursday when he said the U.S. has a "commitment" to defend Taiwan against a potential Chinese attack.
U.S. POLITICS・1 DAY AGO

The current supply chain crisis might jeopardize President Joe Biden's goal to vaccinate the whole country after a major distribution executive urged him to postpone the government regulations due to persistent supply chain concerns. CEO of the National Association of Wholesaler-Distributors Asked Biden To Postpone Vaccine Mandate. In a recently...
PHARMACEUTICALS・17 HOURS AGO
WashingtonExaminer

President Joe Biden made a number of false or misleading claims at a town hall event in Baltimore on Thursday as he attempted to sell his party's spending legislation.
BALTIMORE, MD・1 DAY AGO
Magnolia State Live

FOX News’ Laura Ingraham sat down with a University of Mississippi professor who claims to be targeted by the “liberal mob” for using politically incorrect terms after being removed from graduate classes in the upcoming spring. Journalism professor Mark Burson was accused by two students of racism when he used...
COLLEGES・6 HOURS AGO
Fox News

White House press secretary Jen Psaki said President Biden's approval ratings are so low because people are "tired of fighting" the coronavirus pandemic, which Biden promised to "shut down" during the 2020 campaign. A reporter asked Psaki during the White House's Friday press conference why the president's approval ratings have...
PRESIDENTIAL ELECTION・1 DAY AGO