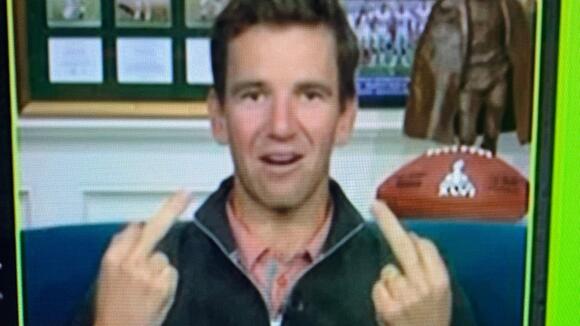 Eli Manning is a two-time Super Bowl champ, but he still has a lot to learn about being on television.

By all accounts, ESPN's alternate 'Manning Cast' broadcast during Monday Night Football have been a resounding success. The brothers have obvious chemistry with one another, and their dry senses of humor, football expertise and A-list guests make the viewing experience entertaining and informative.

Monday night's broadcast featuring the Eagles and Cowboys showed that the pair still has a lot to learn about being on television, though. Lesson No. 1: refrain from using offensive hand gestures on camera, if possible.

Eli Manning clearly needed to be schooled in that regard during the fourth quarter of the game. With the Cowboys comfortably ahead and the result assured, the Manning brothers and guest Chris Long discussed their playing days, with Eli describing how hostile Philadelphia fans were to him. He recalled a 9-year-old boy giving a particularly offensive gesture, and then after considering his options for a beat, demonstrated said gesture for the viewing audience.

"I'm sure you can blur that out, right?" Manning asked after flipping off the entire country.

Eli later apologized for the moment, but there was no need. The Cowboys were ahead by 20 points at the time of his likely FCC offense, and the double bird was instantly the most interesting development in an otherwise boring blowout. While Eli seemed sincerely regretful for his misstep, Peyton and Long could hardly hide their amusement.

Chin up, Eli—there's always next week. Well, that's not exactly true. The Mannings will be taking a break for the next few weeks before returning to our screens for the Week 7 matchup between the Saints and Seahawks.

The "Manningcast" is back for "Monday Night Football" in Week 13. Peyton and Eli Manning will be on ESPN2 broadcasting their thoughts about the Bills vs. Patriots game, and as always, they will be joined by guests throughout the evening in each of the game's four quarters. The guest list...
NFL・1 DAY AGO
Sportsnaut

Three Takeaways from the New Orleans Saints' Week 13 Loss to the Dallas Cowboys from the Superdome.
NFL・2 DAYS AGO
Sportsnaut

Check out odds, plays and more for the Dallas Cowboys vs. Washington Football Team NFL Week 14 matchup on December 12, 2021.
NFL・18 HOURS AGO

Can the Tampa Bay Buccaneers win back-to-back Super Bowls? Find out how the 2021 schedule sets up nicely for Tom Brady and Co. to make another title run.
NFL・1 DAY AGO
Sportsnaut

The first 17-game season in NFL history is well underway. And while there are still plenty of games ahead to
NFL・1 DAY AGO
fantasydata.com

As the NFL season rolls along, the football world turns its attention to Monday Night Football again in Week 12. We get a matchup of the Seattle Seahawks (3-7) at the Washington Football Team (4-6) with an over/under of 47.0. Seahawks quarterback Russell Wilson continues to work back from a significant finger injury and this could be the week he emerges as the old Russ. That's just one of the storylines for tonight's DraftKings Showdown slate. Here are some suggestions on who to put in your lineup tonight:
NFL・9 DAYS AGO
snntv.com

TAMPA (SNN-TV) - The Tampa Bay Buccaneers came into their Monday Night Football match up with the New York Giants in need of a win after dropping the last two games to the Saints and the Washington Football Team. Tom Brady threw for over 300 yards and two touchdowns and...
NFL・14 DAYS AGO

Head coach Ron Rivera has spoken of changing the culture of the WFT. When looking at what he has inherited, is there anything more that needs to be changed (on the field) than how Washington has performed on Monday Night Football?. While the players have changed many times over in...
NFL・10 DAYS AGO
Pride Of Detroit

Alright, folks, let’s close out Week 12, shall we?. The Seattle Seahawks face off against the Washington Football Team in what could be a do-or-die game for both teams. With Seattle holding a record of 3-7, their playoff hopes hang on a thread. The 5-6 Minnesota Vikings are in the final playoff spot right now, so a late rally could still propel the Seahawks into the postseason. Their run game has not been the same since losing starting back Chris Carson to injury, and their offense as a whole has derailed down the stretch.
NFL・8 DAYS AGO
94 WIP Sports Radio

The Philadelphia Eagles defeated the Denver Broncos in dominant, impressive fashion in Week 10 to improve to 4-6, putting themselves in position to compete for a playoff berth.
NFL・23 DAYS AGO
The Spun

Not every first-round NFL draft pick lives up to their potential, or the high investment a team makes in them. But for one former first rounder, his struggles are reportedly starting to frustrate his team. According to CBS NFL insider Jason La Canfora, the Pittsburgh Steelers are not pleased with...
NFL・3 DAYS AGO
crescentcitysports.com

Missouri head football coach Eli Drinkwitz and Dan Mullen, whom Florida fired this past weekend, probably will not be exchanging Christmas cards. After trolling Mullen's Star Wars-inspired Halloween costume — which stemmed from a previous loss to the Gators — following this past Saturday's 24-23 overtime win, Drinkwitz was asked Tuesday for his initial thoughts on Florida pulling the plug on his coaching peer.
FLORIDA STATE・14 DAYS AGO
Yardbarker

The Bills Mafia doesn't need to be told how the upcoming game between its beloved Bills and the visiting New England Patriots on Monday night is the most important one of the season for the home team. But as a public service for all, we at Bills Central are chronicling...
NFL・5 DAYS AGO