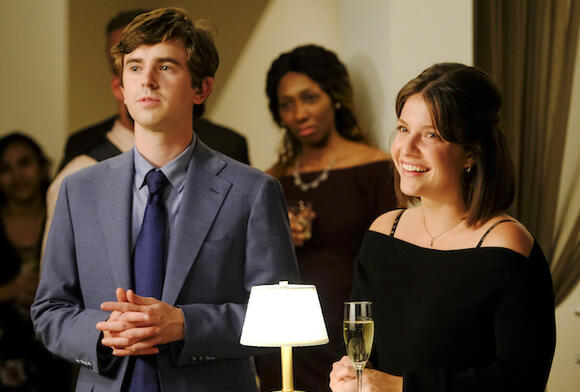 St. Bonaventure is in for a major shakeup following the events of The Good Doctor ‘s Season 5 premiere.

As TVLine previously reported, the ABC medical drama was poised to introduce an “internal nemesis” this fall — and as we expected, that nemesis is none other than one Salen Morrison, played by Tony-winning actress Rachel Bay Jones.

The presumed Patient of the Week came to the clinic experiencing shortness of breath, blurred vision and headaches, all a result of her ADHD medication. But it turned out that she was messing with Andrews, Morgan et al. in an attempt to determine if the doctors employed by St. Bonaventure were up to snuff.

Salen, who we can only presume is some sort of wealthy businesswoman, had previously been diagnosed with Raynaud’s phenomenon — a condition that causes decreased blood flow to the fingers — which eventually developed into systemic scleroderma. The diagnosis had come seven years ago, after experiencing symptoms for three years before that.

“Lots of bad doctors out there,” Salen surmised. “I went off my scleroderma meds a few weeks ago to see if you doctors were more of the same.” But why? 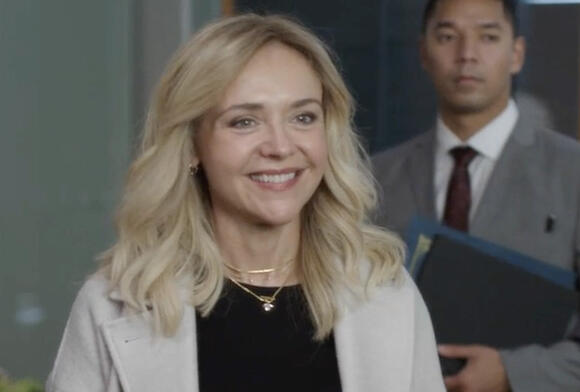 In the very last scene, Lim was waiting to present a detailed budget report before the hospital’s board. She was also about to inquire about hiring new boyfriend Mateo as a new surgical attending — presumably to fill the vacancy left by Melendez. But once the doors opened in front of her, revealing that the meeting had already been adjourned, Glassman told the chief of surgery that there had only been one item on the agenda: St. Bonaventure had just been purchased by Salen! As the new owner exited the boardroom, she turned to Glassman and Lim to say that she’s “looking forward” to working with them.

“This tests everybody, including Shaun,” executive producer David Shore previously told TVLine. “Of course, Shaun is going to have a different point of view on it,” as we’ll see in upcoming episodes.

“I just love what [Jones] brings, what this character brings,” Shore waxed on. “She just has a great dynamic and a great energy. She is just going going going.” Sometimes she appears “scattered,” he said, but she is always “focused on what she wants to be focused on from moment to moment, brilliant and capable at the same time, and she proves to be a real challenge to our people.”

Among other notable developments in the Season 5 opener…

* Seeing how much Lea struggled with planning their engagement party , Shaun insisted that he play an equal part in planning their wedding — which, after Lea’s nightmare in the premiere’s opening scene, is not going to be held outdoors.

* Speaking of Shaun and Lea, their engagement party nearly went off without a hitch… until an inebriated Glassman gave a toast and revealed that he and Debbie separated two months ago. 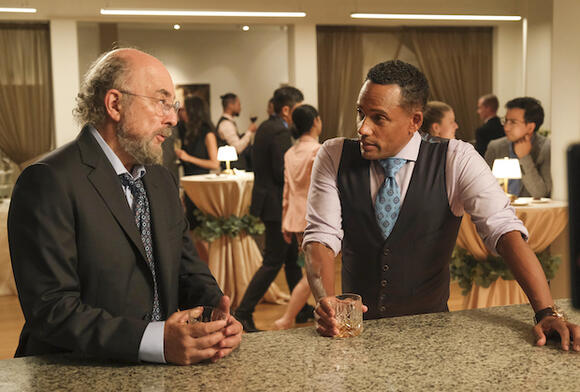 * Andrews, also newly single, accidentally wound up with two dates for Shaun and Lea’s party. His plus-ones ultimately left together, and he went home with the bartender. Quite the player, huh? But by the end of the hour, when Andrews asked the bartender if she’d like to get breakfast and she declined, it was clear that this man is not built for bachelorhood. He wants to be in a committed relationship.

* As for Park and Morgan, the new couple shared a kiss before Shaun and Lea’s party that indicated they’re still going strong. Park, meanwhile, saved the life of the real Patient of the Week: a single mom with advanced cervical cancer who had passed it on to her two sons.

What did you think of The Good Doctor Season 5, Episode 1: “New Beginnings”? Grade it via the following poll, then drop a comment with your full review.

Cue the music! (And no, we don’t mean the sorely missed Survivor theme song that used to play before every episode.) Anyone watching this season knows that Shantel Smith’s self-made jingle is really the hot track of Season 41. But in the show’s Thanksgiving week episode, Smith (who was, without question, getting the strongest winner’s edit thus far) saw her torch extinguished after Ricard won immunity, prompting her four tightest alliance members to flip the script on her. (For a full recap, click here.) So why didn’t she use her idol, what developments didn’t make the episode and how did the Mafia pastor’s...
TV SHOWS・6 DAYS AGO
TVLine

True Story Premiere Recap: Am I My Brother's Keeper? — Plus, Grade It!

There are a lot of meta moments in Netflix’s new limited series True Story. Kevin Hart stars as a wildly successful comedian named Kid, and Wesley Snipes — whose long list of fraternal dramas include Sugar Hill and New Jack City — stars as his deadbeat older brother Carlton. Things come to a head when Kid returns to his native Philadelphia for his comedy tour and has to confront Carlton about the restaurant he launched and lost, right along with Kid’s investment dollars. But Kid only has so much time to focus on Carlton. He’s going through a very public divorce, he...
TV SERIES・11 DAYS AGO
TVLine

New Amsterdam Boss on Lauren and Leyla's [Spoiler]: 'It's What Bloom Deserved, Unfortunately'

While Max and Helen are following their joy, another New Amsterdam couple is in the throes of heartache. In this Tuesday’s fall finale, Leyla confronted her girlfriend, Dr. Lauren Bloom, about the fact that she made a sizable donation to the hospital, paving the way for the creation of a fifth residency slot for Leyla. Lauren argued that she wanted to give Leyla the opportunity that she deserved while trying to keep them together. But Leyla didn’t see it that way. “You didn’t do this for us. You did this for yourself,” Leyla replied. When Lauren said she loves her, Leyla responded,...
TV SERIES・6 DAYS AGO
CinemaBlend

The fall television season is officially in full swing, as faithful viewers are now indulging in all of the new and returning shows that are currently airing. Though it’s still early, warning signs can arise around this time that could indicate a show’s ultimate fate. At the moment, it would seem that two freshman series on Fox may be in danger of cancellation. The shows in question are Our Kind of People and The Big Leap, whose futures now seem uncertain due to a recent confirmation from their home network.
TV SERIES・26 DAYS AGO

What Time Will ‘Succession’ Season 3 Episode 6 Premiere on HBO and HBO Max?

We’re entering Week 6 of Succession, and the drama is still coming. So far, we’ve seen Kendall (Jeremy Strong) and Logan (Brian Cox) take their side and pick their players. We’ve seen investors balk at this war. We’ve even seen the decline of the once immortal Logan Roy. All that’s left is to see who will win.
TV SERIES・14 DAYS AGO
keengamer.com

Doctor Who Season 13 Episode 4 Review: Village of the Angels

Village of the Angels isn’t the best Doctor Who has ever been, but it sure comes close. The fourth chapter of The Flux storyline features the return of the Weeping Angels, who bring some lite-horror concepts and visuals with them. Episode 4 does suffer from a bit too much going...
TV SERIES・12 DAYS AGO

We're back! These episodes of The Good Doctor are about figuring out what's right and what we do when we know it. They’re about our decisions. And about learning that sometimes there are no happy endings because we can't save everyone. Time for a review!. Here we go!. The Good...
TV SERIES・12 DAYS AGO
cartermatt.com

Last night ABC unveiled a first-look promo at The Good Doctor season 5 episode 8, and some bad news to go along with it. Unfortunately, we’re stuck waiting until spring to see the Freddie Highmore show back on the air!. So why is ABC doing this? That’s a worthwhile question,...
TV SERIES・12 DAYS AGO
tvseriesfinale.com

How The Good Doctor's Fall Finale Tragedy Could Change Everything For Shaun And St. Bonaventure

Spoilers ahead for the fall finale of The Good Doctor Season 5 on ABC, called “Expired.”. The last new episode of The Good Doctor in 2021 was a doozy as, in true midseason finale fashion, it delivered some big new twists for the hospital as well as served up some reveals that have arguably been a long time coming in Season 5. After a preventable tragedy happened despite the best efforts of some of the best doctors at St. Bonaventure (including Shaun), everything fell apart. It was heartbreaking for the characters, and could result in some very big changes by the time Season 5 returns in 2022.
TV SERIES・12 DAYS AGO

Is The Good Doctor new tonight on ABC? If you’re wondering about that, or are curious to get some other details, we’re happy to help!. Of course, we should start by handing down what is in this case some bittersweet news: There is a new episode tonight, but it’s the winter finale. We’re going to be stuck waiting until January, at the earliest, to see what’s coming on the other side.
TV SERIES・13 DAYS AGO
cartermatt.com

The Blacklist season 9 episode 6: Should we expect a big reveal?

In the event you did not know already, The Blacklist season 9 episode 6 is coming on Thursday, December 9 — and unless we hear otherwise, we are going into this assuming that it is the fall finale. Typically, episodes that are put in this place are designed to move...
TV SERIES・9 DAYS AGO
digitalspy.com

Doctor Who: Flux episode 5 spoilers follow. Doctor Who fans are more than used to theorising about their favourite show. For years, even decades, viewers have trained themselves to figure out even the most wibbly-wobby and timey-wimey of plot points long before any secrets have actually been shared. That tradition...
TV SERIES・7 DAYS AGO
epicstream.com