By Lizzie Dearden
The Independent
29 days ago 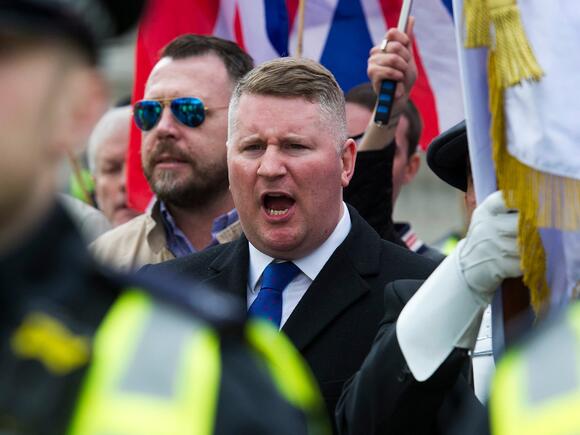 The far-right group Britain First has been allowed to re-register as a political party by the Electoral Commission .

The watchdog said an official application “met the legal criteria”, despite leader Paul Golding holding convictions for a terror offence and hate crimes.

In a statement, Britain First vowed to field candidates in upcoming elections as a “fully-fledged political party”.

“This is a stupendous victory for the Britain First movement,” said an email to supporters.

“Although our street activities will continue, this day marks the birth of Britain First as a traditional political party that will take the fight to the establishment through the ballot box.”

Britain First was a political party from 2010 until it was deregistered by the Electoral Commission in 2017 for administrative reasons.

It became notorious for “mosque invasions” and other activism targeting Muslims, and was condemned by the government after Donald Trump shared Britain First tweets in 2017.

At the time, Britain First had a large following on Twitter and more than 2 million likes on Facebook, but the pages have since been removed.

Its official registration as a political party was announced on Monday, hours after Golding, 39, and his former deputy Jayda Fransen, 35, agreed to pay “substantial damages” to settle a libel case.

The High Court heard that they falsely claimed the Halal Food Authority and two employees were involved in funding terrorism in February 2017, and offered no defence to the resulting defamation claim.

Both Golding and Fransen were jailed for religiously-aggravated harassment in March 2018, after filming and harassing innocent Muslim victims they wrongly believed to be involved in a rape trial.

In May last year, Golding was convicted of an offence under the Terrorism Act for refusing to allow police access to his phone and computer when stopped while travelling back to the UK from Russia.

He is listed as the leader of Britain First on the Electoral Commission website, while treasurer Tim Burton was convicted of harassing an anti-hate crime campaigner in 2017.

The Independent understands that their convictions are not a bar to registering as a party official under electoral law.

The registration process does not include an assessment of political policies or views, although the Electoral Commission must check any constitution or membership policy under its public sector equality duty.

There have been previous calls for Britain First to be proscribed in the wake of attacks carried out by its supporters.

The Finsbury Park terrorist Darren Osborne had read material from far-right activists including Fransen and Golding before ploughing a van into Muslim worshippers in June 2017.

Days later , Britain First supporter Marek Zakrocki drove his car into a restaurant after telling his wife he wanted to “kill a Muslim” and was “doing this for Britain”.

The extremist, who was also carrying a kitchen knife and Nazi coin, had donated money to Britain First and police found the group’s flyers at his home.

An Electoral Commission spokesperson said: “The application to register Britain First as a political party has been approved. We assessed this application against the criteria set out in law, including consideration of public comments submitted to us. The party’s application met the legal criteria and the party has therefore been registered.”

In 2019, Britain First was fined more than £44,000 for multiple breaches of electoral law, including undeclared donations and a failure to provide proper financial records or accounts.

At the time, the Electoral Commission said it had shown a “disregard for the law” and a “disappointing lack of transparency into the party’s finances”.

Britain First attempted to bring a legal challenge against the Electoral Commission over its refusal to register the group as a political party in Northern Ireland, but the case was dismissed by a Belfast judge in March.

TRIPOLI, Oct 24 (Reuters) - Registration for candidates in Libya's presidential and parliamentary elections should open in November, the head of the electoral commission said on Sunday. Elections are a key step in a U.N.-backed process to end a decade of violence by creating a new political leadership whose legitimacy...
WORLD・2 DAYS AGO
Reuters

KINSHASA, Oct 16 (Reuters) - Police in Democratic Republic of Congo used tear gas to break up clashes between supporters of the president and an opposition leader on Saturday, as lawmakers selected a new head of the electoral commission. The National Assembly chose Denis Kadima, an election expert with decades...
POLITICS・10 DAYS AGO
The Guardian

Latest updates: MP claims manner in which investigation against him was conducted caused extreme anguish to his wife
POLITICS・9 HOURS AGO
TIME

Frances Haugen Is Talking to European Lawmakers. That's a Big Problem for Facebook

Uzbekistan's President Shavkat Mirziyoyev cruised to victory on Monday in an election monitors ruled was "not truly competitive" despite some reforms in the authoritarian Central Asian state. The vote Sunday saw no real opposition candidates challenge Mirziyoyev, who came to power in 2016 after the death of his mentor, dictator Islam Karimov, who ruled Uzbekistan for 27 years. The Central Election Commission said Mirziyoyev had taken 80.1 percent of the vote, according to a preliminary count. He has been credited with launching what he calls "New Uzbekistan" by ending a decades-old system of forced labour with roots in the former Soviet Union and introducing limited media freedoms.
WORLD・1 DAY AGO
The Independent

Nato was not defeated in Afghanistan, defence secretary says

Nato did not suffer a military defeat in Afghanistan, as it was not overrun, but there was a political defeat experienced as the western forces ran out of “resolve” to continue the fight, according to Defence Secretary Ben Wallace. Wallace made the comments while giving evidence to the Commons defence...
WORLD・4 HOURS AGO
The Independent

The Latest: EU, US voice 'grave' concern over Sudan upheaval

CAIRO — The European Union has joined the United States in expressing grave concern about a possible military takeover underway in Sudan EU foreign affairs chief Josep Borrell tweeted on Monday that he’s following events in the northeast African nation with the “utmost concern,” after reports emerged that Sudanese military forces had detained several senior government officials, including the interim prime minister. “The EU calls on all stakeholders and regional partners to put back on track the transition process,” Borrell wrote, referring to Sudan’s fragile transition from autocracy to democracy after the ouster of longtime ruler Omar al-Bashir in 2019.Earlier, U.S. Special Envoy for the Horn of Africa Jeffrey Feltman said Washington was “deeply alarmed” and indicated that a military coup would threaten American aid to the impoverished country. “As we have said repeatedly, any changes to the transitional government by force puts at risk U.S. assistance,” the U.S. Bureau of African Affairs wrote on Twitter
WORLD・1 DAY AGO
Washington Post

BERLIN — Hungary's opposition parties on Sunday banded around a single candidate to try to unseat Prime Minister Viktor Orban, the populist leader accused of chipping away at the country's democracy during more than a decade in power, in next year's election. Peter Marki-Zay, a conservative small-town mayor who was...
POLITICS・9 DAYS AGO

After the early morning arrests of government officials, thousands flooded the streets of the capital, Khartoum, and its twin city of Omdurman to protest. Footage shared online appeared to show protesters blocking streets and setting fire to tires as security forces used tear gas to disperse them.
WORLD・1 DAY AGO
AFP

Germany's interior minister on Sunday said the country would increase controls on the border with Poland, as police broke up an armed group of far-right activists trying to prevent migrants from entering. Horst Seehofer told the Bild am Sonntag newspaper that 800 police had already been deployed on the German-Polish border to help deal with a recent increase in migrants crossing into Germany from Belarus. "If necessary, I am ready to reinforce this even more," he added. Police on Sunday broke up around 50 activists from the radical far-right group "The Third Way" (Der III. Weg), which had called for its members to gather to take action against migrants seeking to cross the border from Poland.
POLITICS・2 DAYS AGO
MSNBC

Two stocks linked to Donald Trump dropped in trading shortly after the ex-president detailed plans for one of the companies, and the other firm said it would sell additional shares to raise capital. The big pullbacks for the SPAC Digital World Acquisition Corp., and Phunware came after both companies saw...
STOCKS・10 HOURS AGO

Russia's national coronavirus task force reported 1,106 COVID-19-related deaths on Tuesday, the most since the start of the pandemic.
PUBLIC HEALTH・10 HOURS AGO
globalvoices.org

As the Taliban removed ethnic Uyghur militants from the border zone between Afghanistan and China, observers said there could be a revived policy coordination between the new leadership in Kabul and the Communist Party in Beijing. According to a UN report, there are 500 Uyghur militants among the Taliban. If...
POLITICS・13 HOURS AGO
Newsweek

The Pentagon has denied accusations of a cover-up, pointing to public comments and a press statement on the incident.
POLITICS・8 HOURS AGO
Axios

Sen. Ted Cruz (R-Texas) does not plan on stalling the confirmation of President Biden's ambassador to China, Nicholas Burns, as he has done with dozens of other State Department nominees, according to a source familiar with the decision. Why it matters: Burns, a former career diplomat widely viewed as one...
FOREIGN POLICY・10 HOURS AGO
The Independent

A senior scientific adviser to Boris Johnson’s government has admitted that the idea of so-called ‘plan C’ restrictions has been discussed should the surge in Covid cases get worse.Ministers have denied reports that the government is preparing plan C curbs that would ban the mixing of households in England this winter if cases continued to rise.But Prof Lucy Chappell, chief scientific adviser to the Department of Health and Social Care, told a parliamentary committee on Tuesday that further measures beyond plan B had been “proposed”.Asked by MPs if there was a plan C in government, Prof Chappell said: “It...
PUBLIC HEALTH・10 HOURS AGO
Business Insider

Russia and China's deepening ties have worried US officials, but some say Moscow should be worried about its increasingly powerful partner.
POLITICS・1 DAY AGO