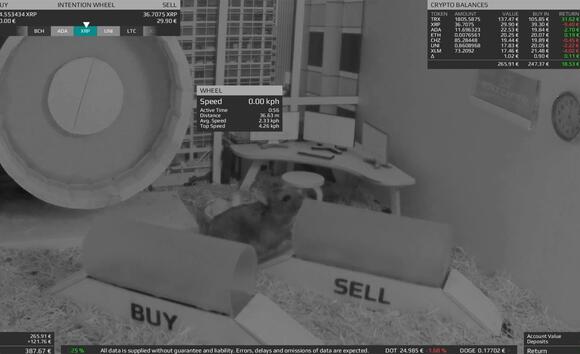 G erman hamster Mr. Goxx is running circles around the competition in the cryptocurrency arena.

The rodent started out with the euro equivalent of $390 on June 12 in his exchange account, which was set up by his anonymous owner. Three months later, the hamster has managed to grow his overall asset portfolio to $498. The increase puts Mr. Goxx ahead by nearly 30%, outperforming Bitcoin , the S&P 500, and even Warren Buffett’s company Berkshire Hathaway, according to Protos .

“Mr. Goxx is happy to see that some of his investments finally pay off,” the hamster's owner told the outlet.

Mr. Goxx conducts his crypto-trading sessions from a high-tech cage in Germany , where his owner livestreams the hamster on Twitch . The hamster runs on an "intention wheel" on which he selects one of about 30 cryptocurrencies and then travels through one of two decision tunnels. His buy tunnel purchases 20 euros ($23.60) of the selected crypto, while the sell tunnel liquidates the entire position, the outlet reported.

The hamster has enjoyed some success in the last month. In July, the hamster purchased $23.79 of Dogecoin and sold it for $34.80 on Thursday, netting a 46% profit. Other times, Mr. Goxx will buy a cryptocurrency and then immediately sell it, losing a few cents in the process, per the outlet.

The hamster's Twitch, Reddit , and Twitter accounts insist the investments are for entertainment purposes only and should by no means be taken as serious investment advice.

The owner also announced on Monday a new set of collectible cards based on Mr. Goxx that can now be purchased, joking that the cards could become valuable one day.

Walmart is rolling out a program for customers to exchange cash for Bitcoin at select Coinstar machines in its stores.
BUSINESS・2 DAYS AGO
WashingtonExaminer

Lawmakers demand answers from Fauci on allegedly experimenting on puppies

Dr. Anthony Fauci is facing a demand from lawmakers on both sides of the aisle to divulge information regarding the alleged use of an experimental drug on puppies.
CONGRESS & COURTS・13 HOURS AGO
WashingtonExaminer

A Democratic Oklahoma state representative who identifies as "nonbinary" complained after Republican Gov. Kevin Stitt insisted there was "no such thing as non-binary sex."
OKLAHOMA STATE・10 HOURS AGO
Benzinga

Bitcoin, Ethereum, Dogecoin Set Up Trades for Bulls, Bears: How To Play The Cryptos

Bitcoin (CRYPTO: BTC), Ethereum (CRYPTO: ETH) and Dogecoin (CRYPTO: DOGE) are all trading higher in strong uptrends. An uptrend occurs when a stock or crypto consistently makes a series of higher highs and higher lows on the chart. The higher highs indicate the bulls are in control, while the intermittent...
COMMODITIES & FUTURE・10 HOURS AGO

There are plenty of alternatives to Bitcoin and other big-name cryptocurrencies. If you’re ready to invest in some crypto, consider these affordable options.
MARKETS・1 DAY AGO
The Motley Fool

If you owned a $1,000 stake in Berkshire Hathaway when Warren Buffett became the company's CEO more than a half-century ago and held on to your position, you would now own stock worth roughly $22.6 million. While matching that kind of incredible performance over the next 50-plus years is likely out of reach due to the investment conglomerate's already massive size, the company's performance under Buffett's tenure should make it clear why the famous investor is sometimes referred to as the Oracle of Omaha.
STOCKS・2 DAYS AGO
MarketWatch

Also, how Elon Musk can become a trillionaire, Tesla's great results and a surprising retirement destination.
STOCKS・1 DAY AGO
leedaily.com

This is another time in the market that Cryptocurrency dipped to a huge mishap. On Binance’s US market Thursday morning, the price of Bitcoin crashed by 87 percent, dipping to as low as $8,200 from approximately $65,000. On other markets, the price did not behave in the same way which was expected, and on Binance, the level almost immediately returned to where it had been. In an emailed statement, Binance.US said,
MARKETS・1 DAY AGO

It’s important to know what you’re getting into before you buy into cryptocurrency. Find out how these top picks compare and what to consider before investing.
STOCKS・1 DAY AGO
The Motley Fool

Cryptocurrency may be the hottest new investment, but it's not right for everyone. Crypto can be risky, and there's no guarantee you'll make money. By investing in S&P 500 ETFs, you have a better chance of becoming a millionaire. After a rough summer, cryptocurrency is making headlines yet again as...
STOCKS・2 DAYS AGO
Newsweek

The Tesla CEO's wealth is even more notable when compared with other famous billionaires.
NEW YORK CITY, NY・2 DAYS AGO
MarketWatch

Here’s why Facebook changing its name could boost its stock

On Friday, Federal Reserve Chair Jerome Powell noted that he had concerns about higher inflation.
BUSINESS・2 DAYS AGO
SmartAsset

There’s currently one way to buy cryptocurrency exchange-traded funds in the U.S. — through the Bitcoin Strategy ETF that deals in Bitcoin futures traded on the Chicago Mercantile Exchange. More such possibilities are on the horizon stateside, but these products … Continue reading → The post How to Invest in Crypto ETFs appeared first on SmartAsset Blog.
STOCKS・2 DAYS AGO
Brandon Wang

Crypto Rallies as Bitcoin Once Again Surges Past $60,000 But Should Everyone Invest?

The last week or so has been absolutely wild for just about everything in the crypto space. After what seemed like a small pull back in the markets, the crypto market is once again coming close to its all time highs. Bitcoin has risen past the $60,000 mark again and Ethereum may be coming close to $4,000 again.
2 DAYS AGO
MarketWatch

At some Walmarts, you can now buy bitcoin from a kiosk

You can use cash to buy bitcoin at 200 Coinstar kiosks located inside Walmart stores across the U.S.
RETAIL・2 DAYS AGO
newmilfordspectrum.com

How many entrepreneurs are as confident now as they were before the Covid-19 pandemic began? Yes, we know the majority of the S&P 500 are companies that began in down markets. And yes, the best entrepreneurs intuitively use hard times to lean in and listen even harder to their market and customers, innovating where necessary and making their companies more resilient than ever before.
BUSINESS・3 DAYS AGO
Inc.com

Berkshire Hathaway CEO Warren Buffett has been wildly successful for several decades, making him the world's 10th-richest person as of this writing. He also has given his followers and shareholders priceless investment advice over the years. But when it comes to investment choices, only one truly counts. The best investment.
STOCKS・3 DAYS AGO
ambcrypto.com

Liz Young, Head Of Investment Strategy at SoFi, recently shared some advice about when and how to decide which asset classes to allocate in one’s portfolio, during a recent podcast. According to the exec,. “The first rule of portfolio construction is to have asset classes that are not correlated to...
BUSINESS・3 DAYS AGO
notebookcheck.net

In an interview with Business Insider, a 31-year-old former pediatric nurse from Omaha in the US state of Nebraska has shared the story of his unexpected success which serves as an example that even small crypto traders can, with a little bit of time and luck, profit from the continuing boom revolving around cryptocurrencies like Bitcoin. The crypto journey of Josh Dorgan began in the year of 2017, when one bitcoin was only worth a measly US$2,000.
NEBRASKA STATE・4 DAYS AGO