Matthew Slater On Tom Brady: ‘That’s The Greatest Player In The History Of Football’ 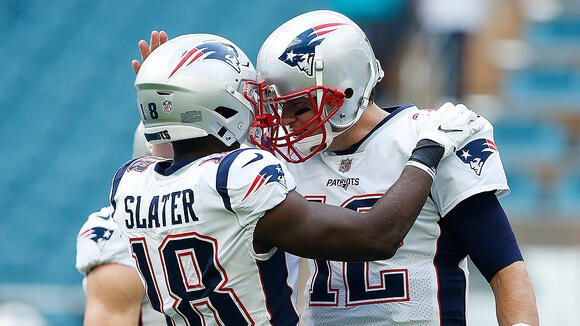 FOXBORO (CBS) — The Patriots are 1-2 on the season heading into this weekend’s monumental matchup against Tom Brady and the Tampa Bay Buccaneers at Gillette Stadium. One of New England’s longtime leaders is doing his best to tell everyone in the locker room to ignore the noise surrounding Sunday’s matchup and focus on what the Patriots need to do to win football games.

But still, it’s hard for special teams captain Matthew Slater to completely ignore the fact that Tom Brady is coming back to Gillette Stadium as a Buccaneer. With all that Brady accomplished during his two decades in New England, Slater offered up plenty of praise for Brady as a football player and teammate on Monday afternoon.

“To start, I have a tremendous amount of respect for Thomas. Obviously, having played with him for 12 years, I couldn’t think any higher of a player than I think of Tom Brady,” Slater said Monday. “I couldn’t think more highly than anyone that has ever played the game than I think of Tom. As a player, as a friend, he has been nothing but kind to me and my family. So I’m very appreciative of that relationship.

“It is what it is. I’m going to encourage the guys to ignore the noise, which we always say around here, but there is certainly going to be a lot of noise this week,” he said. “We’re going to have to do that collectively, and prepare this week so we can fight our tails off for 60 minutes.”

Slater said it will be strange to see Brady take the Gillette Stadium field in a Bucs uniform, but he understands why the quarterback left the only franchise he had ever played for last offseason.

“I’ve been around this game my entire life and players change teams. It’s like someone changing a job; you work at a company for 20 years and then you move to a different company,” he explained. “We romanticize things because it’s sports and I get that and respect that. But at the same time, I’m sure Tom and other players who left this team will tell you the same thing; they have to do what is best for their families and their own situation.”

And like just about everyone in New England, Slater isn’t surprised that Brady continues to play at the highest level at the age of 44.

“That’s the greatest player in the history of football,” he said. “Nothing should surprise you.”

The Buccaneers wild win over the Patriots on Sunday didn't just allow Tom Brady to get revenge on his old team, the victory also allowed Brady to enter a very exclusive club. Thanks to the victory, Brady is now just the fourth quarterback in NFL history to defeat all 32 teams, joining Peyton Manning, Drew Brees and Brett Favre.
NFL・21 DAYS AGO
E! News

Watch: 10 of Tom Brady & Gisele Bundchen's Hottest Red Carpet Looks. Tom Brady had a big day as he led the Tampa Bay Buccaneers to another win, but nothing compared to a chat he shared with his son following the game. On Sunday, Oct. 10, after the 44-year-old star...
NFL・15 DAYS AGO
FanSided

A lucky Bucs fan ended up with Tom Brady’s 600th career touchdown pass during the game against the Bears. What did Tampa give him to give it up?. Tom Brady has thrown a ton of valuable touchdown passes in his career. His second one on Sunday was particularly special. The...
NFL・1 DAY AGO
The Spun

Tom Brady reached another major milestone on Sunday afternoon against the Chicago Bears. He became the first quarterback ever to throw 600 touchdown passes. The historic moment came late in the first quarter when he rifled in a nine-yard pass to Mike Evans. The Tampa Bay Buccaneers wide receiver made the catch to give his team a 21-0 advantage and Brady another huge resume boost.
NFL・1 DAY AGO

Tom Brady has proven time and time again that his family is more important than his football career. He continued that winning-dad streak by sharing a moment with his oldest son Jack, 14, from his relationship with Bridget Moynahan, after he celebrated another win with the Tampa Bay Buccaneers. The...
NFL・15 DAYS AGO
WKSS KISS 95-7

The couple's tweets over the weekend had plenty of users speculating.
NFL・8 DAYS AGO
Insider

A lot has been said about Tom Brady and Bill Belichick’s strained relationship since the former left the New England Patriots in 2020 to join the Tampa Bay Buccaneers. Despite all the negative talks, however, Brady has nothing but love for his ex-coach. After the Buccaneers beat the Patriots on...
NFL・20 DAYS AGO

It was game day for two proud NFL teams yesterday, and fans far and wide came out to support the New England Patriots and the Tampa Bay Buccaneers. Among those dedicated fans was Tom Brady’s wife Gisele Bündchen and the couple’s two kids — 11-year-old son Benjamin Brady and 8-year-old daughter Vivan Lake Brady. As the game carried on, the longtime model posted a selfie to Instagram featuring her two kids, and we couldn’t get over how much Vivian looked just like her mom!
NFL・22 DAYS AGO
cbslocal.com

BOSTON (CBS) — Tom Brady is 44 years old. He can certainly speak for himself. That being said, Tom Brady Sr. is still a father. And a father is always going to have his son’s back. He may even hold grudges against anyone who’s perceived to have crossed his child.
NFL・28 DAYS AGO
Sports Illustrated

Bucs Fan Who Returned Tom Brady's Ball Has One Request

This is the perfect ask and Tom should totally do it.
NFL・20 HOURS AGO
The Spun

Tom Brady threw the 600th touchdown pass of his NFL career on Sunday afternoon, finding wide receiver Mike Evans across the middle. The seven-time Super Bowl-winning quarterback made history with the throw, as no other NFL quarterback has reached the 600-touchdown mark. Brady didn’t get to hold onto the ball,...
NFL・1 DAY AGO
The Spun

Tampa Bay Buccaneers quarterback Tom Brady seems to be doing just fine in the Sunshine State, but it turns out there’s one thing he dislikes about his new home. On Saturday afternoon, Brady tweeted “Missing the fall this year.”. Brady spent roughly two decades in Massachusetts, so he certainly got...
NFL・10 DAYS AGO
New York Post

Trouble in paradise, or the grumblings of an annoyed co-worker?. A new book, “It’s Better to Be Feared” by ESPN writer Seth Wickersham, explores the Patriots dynasty through hundreds of sources and interviews that reveal the secretive inner workings of the team from 2001-19. The book suggests the relationship between owner Robert Kraft and head coach Bill Belichick may not be particularly rosy.
NFL・27 DAYS AGO
USA TODAY

Byron Kennedy will get signed jerseys, helmet, cleats, season passes to Bucs games through next season for giving historic ball back to Tom Brady.
NFL・20 HOURS AGO
Los Angeles Times

A Tampa Bay Buccaneers fan briefly found himself in possession of an incredibly valuable piece of memorabilia on Sunday, and the team has promised to reward him for giving it back. Mike Evans caught a touchdown pass from Tom Brady in the first half of Tampa Bay’s game against the...
NFL・1 DAY AGO
NESN

FOXBORO, Mass. — After nearly leading the New England Patriots to an unlikely victory Sunday night, Mac Jones met his predecessor, Tom Brady, at midfield. Their interaction was brief, a quick exchange of congratulations and well-wishes. Jones said Brady left him with a simple message. “He just told me to...
NFL・22 DAYS AGO
E! News

Watch: 10 of Tom Brady & Gisele Bundchen's Hottest Red Carpet Looks. Tom Brady is a three-time NFL MVP, and if you ask his son Jack, it also sounds like he just might be a contender for Best Dad Ever. On Monday, Oct. 11, the 44-year-old Tampa Bay Buccaneers quarterback...
NFL・13 DAYS AGO