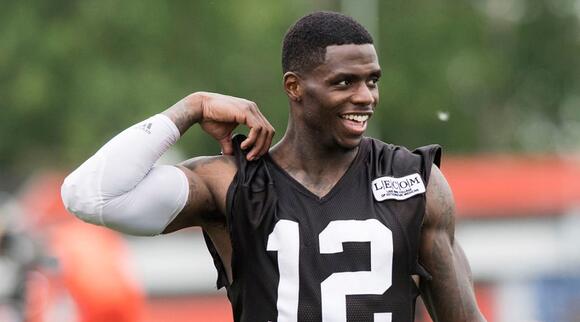 The former All-Pro is being reinstated in the NFL after he was was suspended indefinitely in December 2019.

Gordon was reinstated in the NFL Monday after he was was suspended indefinitely in December 2019 for violating the league's substance-abuse policy . He was conditionally reinstated in December '20, but his reinstatement was rescinded in January .

Gordon suffered a setback in his substance abuse recovery. However, in July, Schefter reported that the NFL randomly drug-tested Gordon for a few months, and he passed each test. He signed a one-year deal with Seattle in 2020.

Gordon is joining one of the highest-powered offenses in the NFL with Patrick Mahomes, Travis Kelce and Tyreek Hill leading the charge. However, a 1–2 start to the season has led to speculation that the NFL is finally catching up to this once-unstoppable unit . With Gordon, a former first-team All-Pro, the Chiefs may once again leave the NFL scratching its head when attempting to stop them.

Notable Chiefs fan Eric Stonestreet has been showing all that Kansas City has to offer to one of the newest members of the team. Stonestreet has consistently shown his fandom at games, on social media, and as alter ego Randy Reid, the brother of Chiefs head coach Andy Reid. This week, Stonestreet was putting in more work for the Chiefs as he introduced newly-signed wide receiver Josh Gordon to Garozzo’s Ristorante. The classic Italian restaurant has been located in downtown Kansas City since 1989 and they tweeted a photo from Stonestreet and Gordon’s visit.
NFL・6 DAYS AGO
The Spun

After three weeks with the Kansas City Chiefs, new WR Josh Gordon has less than 20 snaps on offense and only one target in the passing game. The coaching staff in Kansas City didn’t want to put any expectations on Gordon when he signed with the team, but so far he has struggled to contribute in a meaningful way. He remains buried on the depth chart heading into Week 7, with no clarity as to why he hasn’t been able to get more involved on offense.
NFL・23 HOURS AGO
Arrowhead Pride

Eric Bieniemy on Josh Gordon: ‘The only thing that matters is today’

When the Kansas City Chiefs welcome the Buffalo Bills on Sunday Night Football, the offense will feature a new, high-profile addition: wide receiver Josh Gordon. In his Thursday media appearance, offensive coordinator Eric Bieniemy spoke in depth about the talented (but oft-suspended) player. “Josh has been working his tail off,”...
NFL・14 DAYS AGO

Josh Gordon net worth: How much money does new Chiefs WR make in 2021?

Josh Gordon has bounced around the NFL for nearly a decade. However, his career hasn't been quite as lucrative as some other nine-year veterans. Gordon has been in and out of the league while battling substance abuse problems. He has missed three full seasons as a result of his suspensions and hasn't played a 16-game season since his rookie year in 2012.
NFL・12 DAYS AGO
247Sports

Jason La Canfora discusses the news that Josh Gordon is in the best shape of his life heading into his Chiefs debut.
NFL・12 DAYS AGO
Arrowhead Pride

It won’t take long for Kansas City Chiefs fans to get their first glimpse at wide receiver Josh Gordon, according to NFL Network and FOX Sports’ Peter Schrager. Appearing on FOX’s “NFL Kickoff” on Sunday morning, Schrager suggested Gordon will be a player to watch as the Chiefs host the Buffalo Bills on Sunday Night Football.
NFL・12 DAYS AGO
Columbia Daily Tribune

The Kansas City Chiefs officially signed WR Josh Gordon to the 53-man roster on Tuesday. It was reported that Gordon would have a good shot to play against the Bills in Week 5 ahead of last week's game. He seems to be trending in that direction, but on Wednesday, Chiefs HC Andy Reid was still non-committal on making him active for the game.
NFL・14 DAYS AGO

Josh Gordon may have a flashy Kansas City Chiefs debut after all. Jason La Canfora of CBS Sports reported Gordon "is expected to see plenty of the field" in Sunday's game against the Buffalo Bills. Gordon is said to be in "incredible shape" as he prepares for his first game since the 2019 season.
NFL・12 DAYS AGO
SaintsNewsNetwork

Saints News Network's Fantasy Analyst Brendan Boylan looks at three players who could start in place of Alvin Kamara during his BYE in Week 6.
NFL・6 DAYS AGO
NBC Sports

For the first time since 2019, receiver Josh Gordon has caught an NFL pass. The Chiefs scored a touchdown on their second drive, with Gordon making an 11-yard catch on his first target early in the second quarter. While the play initially appeared broken, Patrick Mahomes — as he so often does — kept things alive by rolling to his right. Then he threw across his body back to Gordon, who jumped up and made the pass complete at Buffalo’s 34-yard line.
NFL・11 DAYS AGO
Blue Springs Examiner

KANSAS CITY, Mo. — The Buffalo Bills thought they were closing the gap with the Kansas City Chiefs last season, then they lost a pair of games to their old AFL nemesis, including the AFC championship game in January. There are plenty of people that think they've closed the gap...
NFL・13 DAYS AGO

Josh Gordon is fantasy football's equivalent of the great white whale. As long as NFL teams keep giving the wide receiver chances to play in the league, fantasy football team managers won't quit him, either. It hasn't been any different now that he's signed by the Chiefs, his fourth team....
NFL・12 DAYS AGO
Sporting News

The Chiefs haven't been able to find a solid No. 2 receiver for their offense during the Patrick Mahomes era so far. They reminded everyone of that when they signed Josh Gordon last week. Gordon, now 30, last played in the NFL during the 2019 season. He racked up 426...
NFL・12 DAYS AGO
Arrowhead Pride

Word that Kansas City Chiefs wide receiver Josh Gordon would be part of the game plan against the Buffalo Bills broke early on Sunday morning. Then the game happened, and Gordon played only nine offensive plays — or 10% on the night. But as Chiefs head coach Andy Reid explained...
NFL・8 DAYS AGO
Kansas City Star

Wide receiver Josh Gordon’s first reception with the Chiefs was an impressive one for a couple of reasons. On a first-down play in the second quarter of the Chiefs’ game against the Buffalo Bills on Sunday night at Arrowhead Stadium, Gordon caught an 11-yard pass from quarterback Patrick Mahomes. But...
NFL・11 DAYS AGO
USA TODAY Sports Media Group

The Kansas City Chiefs played a disproportionate amount of offensive and defensive snaps in Week 5 against the Buffalo Bills. The offense had nearly 30 more snaps compared to the defense. This speaks a bit to the defense’s early-game struggles, but also their ability to get several stops in the third quarter. It also speaks to the offense putting together long drives compared to big explosive chunk plays they’re typically known for.
NFL・11 DAYS AGO
arcamax.com

KANSAS CITY, Mo. — At age 22, Josh Gordon broke out as one of the NFL’s brightest young stars, already a league leader in receiving and a fast-riser to being one of the best you-have-to-account-for-him threats in the game. At 30 now, Gordon has played in just 64 career games...
NFL・7 DAYS AGO
nfltraderumors.co

Jeremy Fowler reports the Kansas City Chiefs are releasing WR Daurice Fountain. Fountain, 25, is a former fifth-round pick of the Colts back in 2018. He signed a four-year, $2.7 million contract with the team, but was waived at the start of the 2018 season. The Colts later re-signed Fountain...
NFL・10 DAYS AGO
Seattle Times

Josh Gordon gets another chance in NFL with Chiefs

KANSAS CITY, Mo. (AP) — At age 30 and after five suspensions handed out by the NFL for violations of the league’s substance abuse policies that cost him three full seasons, wide receiver Josh Gordon describes his landing with the Kansas City Chiefs as “a dream destination.”. “The opportunities, it’s...
NFL・6 DAYS AGO