By Zack Sharf
IndieWire
29 days ago 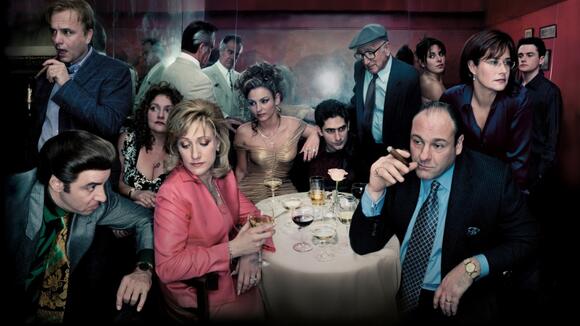 [Editor’s note: The following post contains a minor spoiler for “ The Many Saints of Newark .”]

The upcoming “Sopranos” prequel movie “The Many Saints of Newark” takes place decades before the Emmy-winning HBO drama series, but series creator David Chase still managed to lure back one of the original show’s most popular actors. Michael Imperioli , who starred as Christopher Moltisanti on “ The Sopranos ,” reprises his role from beyond the grave as the posthumous narrator of “Many Saints.” Christopher died in the HBO series’ final seasons. The film’s plot focuses on Christopher’s father, Dickie Moltisanti (played by Alessandro Nivola).

“That was the maraschino cherry on top,” Chase recently told NME about getting Imperioli to return as Christopher as the “Many Saints” narrator. “That was really nice. We first undertook it to clear up possible confusions and to help people understand where they were – where’s Newark, who are the criminals, who’s that guy, is that Silvio… we’re getting a lot of that.”

Chase added that making the late Christopher the film’s narrator was not always how the film was going to start.” The prequel film’s director, Alan Taylor, revealed earlier this month that one idea was to start the film with Edie Falco reprising her role of Carmela Soprano.

“Not to give away too much but, when you make a movie you’re not exactly sure the final shape it’s going to be and we, believe it or not, shot a few things that included other cast members,” Taylor told NME . “We had Edie come in and she dressed up as Carmela and we shot something with her and it wound up not being in the final movie but it was a great excuse to see her again.”

Taylor continued, “She’s so ridiculously talented and she’s also one of these people who — and it seems to frequently be women — that manage to be perfect actors and also the sanest people you’ve ever met in your life. I think Frances McDormand is like that and Edie Falco has that same quality of being like a solid, good, sane person. It was good to see her again.”

“The Many Saints of Newark” opens in theaters and HBO Max on October 1.

Jason Momoa brings a swashbuckling charm to the role of House of Atreides swordmaster Duncan Idaho in “Dune.” The “Aquaman” and “Justice League” actor lends his superhero muscle to Denis Villeneuve’s adaptation of the novel by Frank Herbert, who described the character as being more or less a ladies’ man with dark luxurious hair and a piercing gaze. But Momoa’s turn as Duncan also allows the actor to tap into a deep reserve of camaraderie with Timothée Chalamet’s Paul Atreides, who looks to Duncan with boyish admiration and as a mentor figure. That kind of saucer-eyed reverence Paul has for Duncan was...
MOVIES・4 DAYS AGO
IndieWire

Animated Oscar Contender ‘Belle: The Dragon and the Freckled Princess’ Spins a VR ‘Beauty and the Beast’

One of this year’s animated Oscar contenders could be veteran Mamoru Hosoda’s dazzling Cannes debut “Belle: The Dragon and the Freckled Princess” (Studio Chizu, GKids), inspired by the French “Beauty and the Beast” fairy tale, about rural school kids who take on alter egos in a digital universe, based on their strengths and weaknesses. “Belle” could mark the filmmaker’s second animated feature Oscar nomination after “Mirai.” The movie screens October 23 at Hollywood’s Animation Is Film festival before its later Oscar-qualifying GKids release. Hosoda updates the 18th-century fairy tale that has spawned countless movie adaptations, from Jean Cocteau’s 1946 black-and-white French...
MOVIES・3 DAYS AGO
IndieWire

The annual Gotham Awards is, once again, the first prominent awards ceremony out of the gate during Oscar season, thanks to this morning’s nominations announcement. Films with budgets exceeding $35 million are automatically disqualified from Gotham Awards consideration. For this reason, major Oscar contenders from Netflix, such as Jane Campion’s Venice winner “Power of the Dog,” Lin-Manuel Miranda’s feature directorial debut “Tick Tick Boom,” Jeymes Samuels’ “The Harder They Fall,” and Adam McKay’s “Don’t Look Up” did not make the cut. Prior to the nominations announcement, the Gotham Awards confirmed that Kristen Stewart would be the recipient of this year’s Performer...
MOVIES・5 DAYS AGO
purewow.com

If you were a child in the early 2000s (or if you had one), you may have watched a few selections from the Barbie animated film series, like Barbie of Swan Lake ﻿or Barbie as the Princess and the Pauper. And if not, you may have seen the iconic doll come to life in Toy Story 3.
MOVIES・3 DAYS AGO

When the Star Wars: The High Republic multimedia initiative launched in early 2021, Star Wars fans weren’t entirely certain what to expect from this brand new era in the Star Wars universe. Set about 200 years before George Lucas’s Skywalker Saga begins with Star Wars: Episode I – The Phantom...
MOVIES・6 DAYS AGO
Variety

“Hamilton” Tony nominee Christopher Jackson has signed a first-look deal with CBS Studios to produce across all platforms, including broadcast, streaming and premium cable. “I’m looking forward to continuing my partnership with CBS in this new capacity,” Jackson, whose work as George Washington in Lin-Manuel Miranda’s “Hamilton” earned him Tony and Grammy nominations in 2016, tells me exclusively. “I’ve been a part of their family for the past several years and excited for the future. My partner Samuel McKelton and I, through our production company Honorific Entertainment, are developing several new and exciting projects and cannot wait to share them with...
MOVIES・1 DAY AGO
Variety

The King of Atlantis has officially returned and star Jason Momoa wants “Aquaman” fans to know that the “tides are changing.” As part of the 2021 DC FanDome virtual celebration on Saturday,” Momoa led fans behind-the-scenes of production on the superhero sequel. The sneak peek footage begins with Momoa driving onto set for his first day of production on July 17. “Aloha DC Fandome I apologize for the four year wait,” the star began. “But I’m very proud of the sequel because it’s tackling a lot of issues environmentally, stakes are higher and I’m just excited because I had a big part...
MOVIES・10 DAYS AGO
blackchronicle.com

‘Scream’ Is Back With Original Stars, Hits Theaters in 2022 [Trailer]

Prequels can be a hit or a miss depending on the factors surrounding them: Does the film expand upon the story? Does it shed new light on certain characters? Is it faithful to its original content or does it try something new and abrupt? These questions can be applied to “The Many Saints of Newark,” a new movie about the popular fictional-mobster Tony Soprano, which is able to balance between nostalgia and genuine entertainment.
NEWARK, NJ・9 DAYS AGO
TODAY.com

Slate Plus members get ad-free versions of all Slate podcasts, plus extra segments, bonus episodes, and more. Try it today for just $1. Please enable javascript to get your Slate Plus feeds. Episode Notes. This week, host Isaac Butler talks to actor Alessandro Nivola, who recently starred in the Sopranos...
MOVIES・9 DAYS AGO
Quad

Photo via @tchalamet on Instagram. On Monday, Oct. 10, 2021, Hollywood star Timothee Chalamet hinted via his Instagram at a new Willy Wonka role with the caption “The suspense is terrible, I hope it will last.”. Chalamet has set the stage for a glimpse into the origins of Willy Wonka....
MOVIES・9 DAYS AGO

[This post originally appeared as part of Recommendation Machine, IndieWire’s daily TV picks feature.] Where to Watch ‘Ghosts’: HBO Max (British original) and Paramount+ (American remake) The following is a partial list of similarities between the new CBS comedy “Ghosts” and the original BBC series that premiered in spring 2019. Both series… feature a couple surprised by the inheritance of a once-grand rural estate that has since fallen into a certain amount of disrepair follow that couple’s initial goals to turn the drafty mansion into a quaint bed and breakfast track what happens when an accident leaves one of them — Alison (Charlotte Ritchie) in...
TV SERIES・6 DAYS AGO
miamistudent.net

“Star Wars: Visions” looks to the future with original stories and stunning graphics

The galaxy far, far away is ever-expanding, and the most recent release of “Star Wars: Visions” is a stunning addition to the franchise. The nine separate stories are tied together by themes within the Star Wars universe: stories of hope, loss, good versus evil and the undefeatable strength of the force.
COMICS・13 DAYS AGO
IndieWire

Kristen Stewart has a self-deprecating approach to her career spanning more than 50 films, and that took flight with the release of the “Twilight” franchise. The actress, now an Oscar contender for her turn as Princess Diana in Pablo Larraín’s upcoming festival favorite “Spencer,” spoke to the Sunday Times (via Yahoo) about her body of work, which since breaking away from “Twilight” has long been revered by critics. (And there’s of course her legion of “Twilight” fans, too.) Stewart, who has starred in films from directors like David Fincher and Woody Allen, said that choosing roles can be a “total crapshoot.”...
MOVIES・2 DAYS AGO
GamesRadar+

Get ready for more Sopranos. The show's creator, David Chase, is apparently talking with WarnerMedia about a new prequel series. Previously, while promoting the recent release of The Sopranos movie The Many Saints of Newark, Chase hinted that a sequel could be in the works. Now, confirmation has come that a follow-up is in development – and looks set to be an entire series telling a new Sopranos story.
TV SERIES・5 DAYS AGO
IndieWire

Oscar Isaac excels at addressing life after “Star Wars.” Last year, when asked if he would return to play intergalactic pilot Poe Dameron if given the opportunity, he said he’d consider it “if I need another house.” At the Venice Film Festival in September, when pressed to explain why he signed up to play the guilt-stricken, gambling veteran at the center of Paul Schrader’s “The Card Counter,” he called it a chance to escape “green screen alien space land.”  These cheeky replies almost certainly contain a kernel of truth, but in the case of “The Card Counter,” they only tell a...
MOVIES・7 DAYS AGO
IndieWire

‘Dune’ Has Arrived: How to Watch the Sci-Fi Movie at Home for Free