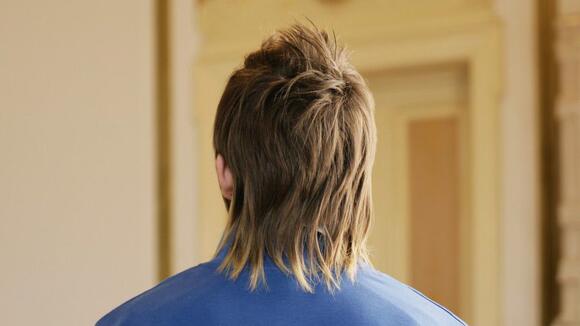 Mullets were popular 30 years ago, but one kid who was born well after the fad faded is getting closer to maybe winning the best kid’s mullet in America.

Greyson Reynolds, 9, is a competitor in the USA Mullet Championships and is a finalist in the kids’ division, WTHR reported.

He’s among the 25 finalists who were pared down from 500 entries, according to Mulletchamp.com.

The field of mullets was cut down to 100 earlier this month, WPTA reported.

Ten of the finalists were selected by the judges while the other 15 were chosen through Facebook voting.

The final round starts Oct. 5 on mulletchamp.com.

The grand prize winner will get $2,500 with second- and third-place finishers getting a gift set from the organizers.

How did Greyson decide on the hairstyle? He told WTHR he was inspired by the movie “Tremors.”

He said his father supported his mullet from the start, but it took a bit of time for his mom to warm up to it.

As for the jackpot, if Greyson wins, he wants to go to Dave and Buster’s, and maybe replace his brother’s iPad that he broke, he told WTHR. He also wants to give some of the cash to those less fortunate.

CULLMAN COUNTY, Ala. (WBRC) - Seven-year-old Ezra Cramer needs your help to become the champion of the mullet!. The USA Kids Mullet Championships is down to the finals. Ezra is looking to bring home the win for our state, and he needs your vote to win!. You can vote for...
8 DAYS AGO
WTQR Q104.1

You can cast your vote now for the best kids' mullet in the country.
KIDS・13 DAYS AGO
FOX 2

Alabama boy fights bullying as he competes in mullet competition

Your kids may not have been born in the 80s, but some are still wanting to rock that 80s mullet. Right now there’s a national children’s mullet competition underway. One competitor is seven-year-old Ezra Cramer from the Huntsville, Alabama area. He started growing his mullet about one year ago. Ezra’s mom heard about the children’s competition and entered […]
13 DAYS AGO
WSLS

ALTAVISTA, Va. – Dreams are turning to reality for an Altavista 13-year-old who is getting to compete in the American Ninja Warrior Junior competition. The first episode will air Thursday night for the boy who had to take the road less traveled by to get there. “He would climb door...
ALTAVISTA, VA・13 DAYS AGO

CHARLOTTE, N.C. (WBTV) - September 25th was Ataxia Awareness Day. Never heard of it? You’re not alone. Though this post comes two weeks late, Kannapolis mom Brittany Wise still wants to educate us all. “On April 20th of this year, my 12-year-old son, Wyatt, was diagnosed with Friedreich’s ataxia,” she...
13 DAYS AGO
wvlt.tv

KNOXVILLE, Tenn. (WVLT) - Having the best mullet in America is now the goal of a 10-year-old Knoxville native. Denver Jobe is currently fourth in the USA Mullet Championships, and trails by just over 500 votes. Just weeks ago, a fellow East Tennessee native Clint Duncan took home the trophy in the adult competition for best mullet.
11 DAYS AGO
Daily Herald

Alma has a dilemma: The 6-year-old New Yorker has tickets for a baseball game on Saturday with her grandfather, but she told her uncle she'd help him with a dance recital that day. "I promised I'd help him. I made a commitment," she says, taking a moment to think about...
13 DAYS AGO
WVNews

NEWBURG — Newburg resident Carter Sapp, 7, will compete this weekend at the Buckwheat 100 GNCC at CJ Raceway in his hometown of Newburg. More than 1,500 racers are expected to compete over the weekend, as the event includes four-wheeled ATV racing on Saturday and dirt bikes on Sunday. Classes range from riders as young as 4 and as old as the 60-plus divisions. The top GNCC pro classes feature some of the world’s top riders, including talent from England, Europe and Australia.
NEWBURG, WV・11 DAYS AGO

Jax Crossland, a nine-year-old boy with quite a head of hair, is defending his, well, crown. The Farmersville resident is within a hair of winning the title for best kids mullet in the country. Crossland is a finalist in the 2021 U.S.A Mullet Championship kids division. He won the title...
COLLIN COUNTY, TX・14 DAYS AGO
92.9 NIN

Back in August, I became aware of a mullet championship. Guess what? They also have a kid's version. The iconic, work in the front, party in the back hairstyle has been popular for decades. Some can pull it off, others...not so much. A competition has been going on to find the best mullet in the country every year. Not shocking in my mind, we have many Texans competing for this thing, especially in the kid's round.
14 DAYS AGO
101wkqx.com

The U.S.A mullet competition expanded to include a kid’s competition! Finally!

For a $10 fee, and with all of the money going to charity, parents were able to submit side views of their children’s mullet haircuts on a national stage. Some of the salads featured on the USA Mullet Championship’s website https://mulletchamp.com/ are pretty fantastic. There were young competitors from Wisconsin and Illinois from over the weekend in the competition. A youngin’ from Arkansas took first place but there was some stiff competition and a lot of variety in the flow this year!
HAIR CARE・5 DAYS AGO
KRMG

Sadly it’s the hairstyle that just won’t go away, especially when there is cold, hard cash and bragging rights on the line. This year it’s 11-year-old Allan Baltz, from Jonesboro, Arkansas, who can now wear the crown of having the best kids mullet in a nationwide competition, the Jonesboro Sun reported.
4 DAYS AGO
momjunction.com

All products recommended on MomJunction are independently selected by our editorial team. If you make a purchase through any of these links, we may receive a commission. Learn more about our product selection process here. IN THIS ARTICLE. Looking for a birthday gift for a 9 year old can be...
5 DAYS AGO
wdrb.com

LOUISVILLE, Ky. (WDRB) -- Calling all mullet lovers: These Kentucky boys are competing in the national USA Mullet Championships, according to a report by LEX 18. The national championship will crown both a kid and a teen with the best mullet hairdo in the country. Five kids and teens from...
7 DAYS AGO
WOWK 13 News

The USA Mullet Championships kids' division competition ended Oct. 11 and votes were cast up until Monday night at 11:59 for the kids' division. Two Tennessee kids, Denver and Jeffrey, competed with their feathered locks on full display for a chance to win. Voting began on Oct. 5.
7 DAYS AGO
WIVB

BUFFALO, N.Y. (WIVB) — A big competition just wrapped up. And not just any competition, either…. We’re talking about the USA Mullet Championships. When you first hear about it, you might think it’s a joke, but it’s not. As they say, business in the front, party in the back. A...
4 DAYS AGO
Daily Tribune

'Crazy in the back,' short up front: Pulaski boy's mullet takes him all the way to finals of kids division of USA Mullet Championships

PULASKI - Even before JD Sterckx’s mullet went nationwide, the 10-year-old from Pulaski was no stranger to turning heads with his hair. The fifth-grader, who plays baseball, basketball, football and wrestles, often gets comments at sporting events. When he went to Indiana for a baseball tournament, it was one, “Oh, nice hair!” after another.
PULASKI, WI・5 DAYS AGO
westorlandonews.com

the only weekly newsmagazine that reports news directly to kids 8-14, is pleased to announce its second Junior Council, and an incredible nine-year-old from Orlando has been chosen to join the national kids council, a collective of “Generation Alpha’s most passionate, vocal young leaders.” Emma F. is one of 12 kids selected from thousands of applicants from across the nation. The Week Junior editors were wowed by her passion for helping others and making a change in the world.
2 DAYS AGO