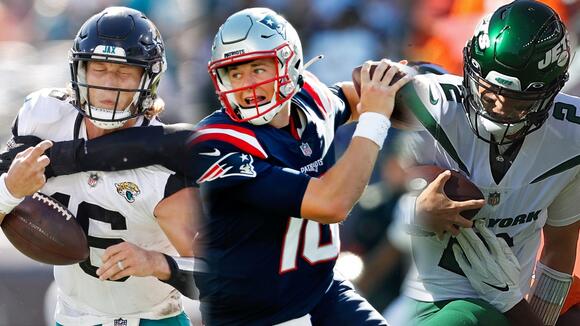 BOSTON (CBS) — Here in New England, folks are obviously going to be giving their full attention to the young man known as Michael McCorkle Jones, analyzing and scrutinizing every single thing he does on the football field for the Patriots. That’s what everybody does with quarterbacks, especially when that quarterback is a first-round pick with a high-profile collegiate career in his recent past.

And on Sunday, Mac Jones had what will go down as the first bad start of his career. While Jones once again faced significant pressure throughout the afternoon, the bottom line is that Jones had a rough day of work against the Saints.

Aided by 50 passing yards in a late, garbage-time drive, Jones finished the game 30-for-51 for 270 yards with one touchdown and three interceptions. The first interception came when he got hit while throwing, the second came off a bobble by tight end Jonnu Smith, and the third came on a fourth-and-10 desperation heave on the aforementioned garbage time drive.

After avoiding throwing an interception for his first two games, Jones now has three next to his name.

But as far as the struggle of rookie quarterbacks go, Jones is not alone.

Trevor Lawrence, who was essentially declared three years ago to be the No. 1 pick in 2021, has had a rough go of it in Jacksonville. He threw two more interceptions in Sunday’s loss to the Cardinals, giving him seven interceptions on the young season.

That puts Lawrence in a tie for the most interceptions in the NFL … with fellow rookie and No. 2 overall pick Zach Wilson.

A week after throwing four picks against the Patriots, Wilson threw a pair of interceptions while his Jets were shut out by the Broncos on Sunday.

Wilson has now completed 55.2 percent of his passes for 628 yards with two touchdowns and seven interceptions, while taking 15 sacks. His passer rating is 51.6.

Lawrence has now completed 54.2 percent of his passes for 669 yards with five touchdowns and seven interceptions, while taking five sacks. His passer rating is 60.3.

In New England, Jones has completed 67.5 percent of his passes for 737 yards, with two touchdowns and three interceptions. He’s been sacked six times, and his passer rating is 79.1.

Clearly, the three rookie quarterbacks with the most playing time have had a bear of time acclimating to the NFL. The climb is that much harder for Lawrence and Wilson, who joined two legitimately dreadful football teams. With new head coaches in place, things could improve in the years to come. For now, though, the challenge of thriving for the Jaguars or Jets is proving to be significant.

Elsewhere, Justin Fields finally got his first start for the Bears in place of the injured Andy Dalton, and it was a nightmare.

Fields was sacked nine times — nine times — while completing just six passes in the Bears’ 26-6 loss to the Browns. Fields was 6-for-20 for 68 yards with no touchdowns or interceptions, and he ran three times for 12 yards. The Bears gained just 47 yards of offense in the entire game. That’s the worst offensive showing in the NFL in the past 40 years.

Of the five first-round quarterbacks, Trey Lance popping in to 49ers games in spot duty for Jimmy Garoppolo seems to be the biggest success story. Lance entered Sunday night’s game vs. Green Bay on a third-and-goal from the 1-yard line with 2 seconds left in the first half, and he easily ran in a touchdown.

Lance later came in as a decoy on a third-and-1, where Kyle Juszczyk motioned under center, took a snap, and fell forward to pick up a first down. Lance did get a chance to throw a pass midway through the fourth quarter, but the play was wiped out by a defensive holding penalty.

Lance now has four rushes for one yard and one touchdown, and he’s completed his lone pass — a five-yard touchdown strike.

Here’s how all of the rookies with starts have fared thus far.

Tom Brady made his official return to New England on Sunday as the Tampa Bay Buccaneers pulled off a 19-17 nailbiter win over the Patriots. However, rookie quarterback Mac Jones certainly held his own against the GOAT, proving that he has what it takes to compete at the highest level, despite the loss.
NFL・11 DAYS AGO
Yardbarker

Do quarterback Mac Jones, Patriots have a Cam Newton-inspired audible?

Do the New England Patriots have a Cam Newton-inspired audible call? Something Mac Jones did on Sunday night left many wondering. A minute into Sunday night’s game between the Patriots and Tampa Bay Buccaneers, Jones used a “Superman” audible call. He pretended to pull his shirt apart to reveal a mock Superman “S” on his chest.
NFL・11 DAYS AGO
ClutchPoints

All eyes were understandably on Tom Brady during Sunday night’s game between the Tampa Bay Buccaneers and the New England Patriots at Gillette Stadium, as it marked the first time that the future Hall of Fame quarterback stepped foot in Foxborough for a game since parting ways with the Pats in 2020. Despite Brady’s presence, though, Mac Jones found a way to steal some of the limelight with an encouraging performance under center.
NFL・11 DAYS AGO
NESN

One common thread that’s connected the New England Patriots’ three defeats this season: Mac Jones winding up on the ground far too frequently. The Patriots’ rookie quarterback took a total of seven hits in the team’s Week 1 loss to the Miami Dolphins. He absorbed 11 in a Week 3 loss to the New Orleans Saints. On Sunday, the Tampa Bay Buccaneers battered him with a season-high 12, plus two more on plays that were negated by penalties.
NFL・11 DAYS AGO

New England Patriots quarterback Mac Jones doesn’t seem too confident about his upcoming matchup against Trevon Diggs and the Dallas Cowboys. Dallas Cowboys cornerback Trevon Diggs is one of the hottest debate topics in the league ahead of his matchup with Mac Jones and the Patriots. Proponents of Diggs are ready to give him Defensive Player of the Year after five weeks, and naysayers are shredding him apart on social media for his inconsistent coverage.
NFL・10 HOURS AGO
On3.com

Patriots quarterback Mac Jones threw an interception early in the third quarter of Sunday’s game in Houston and the Texans scored a touchdown that stretched their lead to 13 points. It would be the final points that the Texans scored all day, but Jones and the Patriots were able to...
NFL・4 DAYS AGO
Yardbarker

Patriots critics certainly got a lot of ammo Sunday as the team struggled and needed a late comeback to defeat the Houston Texans. How much of that actually falls on Jones is debatable. He went 23-for-30 with a touchdown but also threw an interception and tallied a modest 231 passing yards.
NFL・4 DAYS AGO

Mac Jones and the New England Patriots weren't able to emerge with a win Sunday night against Tom Brady's Tampa Bay Buccaneers, but the rookie quarterback did make some history at Gillette Stadium. Jones completed 31 of 40 pass attempts for 275 yards with two touchdowns and one interception. He...
NFL・11 DAYS AGO
FanSided

Patriots: Is Mac Jones really going to be the best QB in the 2021 draft class?

New England Patriots‘ Mac Jones is currently the only rookie quarterback not fighting for his life in the bottom six of FanSided’s Week 6’s quarterback rankings. He’s sitting pretty at No. 19, well above the second highest Trevor Lawrence at No. 27. Other rankings have him above all of his peers, too.
NFL・2 DAYS AGO
NESN

It wasn’t pretty, but the New England Patriots got back in the win column Sunday. New England shook off a miserable first half defensively and overcame a 13-point third-quarter deficit to defeat the Houston Texans 25-22 at NRG Stadium. Under the direction of rookie quarterback Mac Jones, the Patriots scored...
NFL・5 DAYS AGO
art19.com

Mac Jones shouldn’t have to carry the load

NBC Sports Boston Insiders Tom E. Curran and Phil Perry talk about the New England Patriots and the NFL. New episodes drop every Monday, Tuesday and Thursday. Exclusive interviews with Kyle Van Noy on Tuesday's, and Matt Cassel on Thursday's. You can leave a question or comment for Tom or...
NFL・9 DAYS AGO

Devin McCourty on Mac Jones: ‘We Don't See Him as a Rookie'

Devin McCourty offers high praise for Mac Jones originally appeared on NBC Sports Boston. The New England Patriots may be 0-3 at home for the first time since 1993, but safety Devin McCourty doesn't seem to be the least bit worried about quarterback Mac Jones. Asked after the team's 19-17...
NFL・11 DAYS AGO
Yardbarker

- The Houston Texans and New England Patriots have more in common that just members of their personnel. Texans' general manager Nick Caserio spent two decades working in multiple roles for the Patriots before earning the job at Houston's NRG Drive. That will be one storyline to follow when the...
NFL・9 DAYS AGO
The Ringer

What Does a “Successful” Rookie Season Look Like for Mac Jones?

This season was supposed to be different for the Patriots offense. The team spent a lot of money this offseason to ensure that it was. They splurged on two tight ends—Jonnu Smith and Hunter Henry—after realizing how hard it is to play football without a good one. They signed two solid receivers in Nelson Agholor and Kendrick Bourne to help fill out a painfully thin corps. And, most significantly, they replaced aging starting quarterback Cam Newton with a first-round rookie who plays more like the guy who led the Patriots to six Super Bowls over the last two decades.
NFL・14 DAYS AGO
telegram.com

The Patriots lost to Tom Brady, but Mac Jones' performance feels like a win

FOXBORO – It was impossible to miss throughout the week. Tom Brady’s return to New England captivated the sports world. The quarterback’s return to Gillette Stadium to take on Bill Belichick and the Patriots was one of the biggest regular-season matchups perhaps ever. You couldn’t avoid it on your radio...
NFL・11 DAYS AGO
CBS Sports

Tom Brady's return to Foxborough to face the New England Patriots for the first time since leaving the franchise has absolutely dominated the NFL this week. On top of the sheer hype for this game to kick off, Brady's relationship with Bill Belichick and the icy road they went down that ultimately led to their divorce has been one of the main storylines that has gone under the microscope along with how these two will attack one another when they ultimately square up in prime time.
NFL・12 DAYS AGO
USA Today

The New England Patriots drafted Mac Jones to be their next quarterback, hopefully a franchise-altering talent. After four weeks, Jones has been almost exactly what he was billed to be: a mature and smart pocket passer who will prioritize efficiency over the big play. Jones’ stat line isn’t pretty, largely...
NFL・8 DAYS AGO
NESN

How Mac Jones Is Like Tom Brady; What Patriots Rookie Can Learn From Legend

Mac Jones is not the next Tom Brady because there will never be another Tom Brady. But if the Patriots rookie can get anywhere remotely close, New England will be in business for quite some time. Jones went toe to toe with Brady on Sunday night, with the greatest of...
NFL・11 DAYS AGO
NESN

Mac Jones was forced to talk a lot about Tom Brady last week. However, you might have noticed something peculiar about how the Patriots rookie was speaking about the 44-year-old NFL legend. As Sunday’s game between New England and the Tampa Bay Buccaneers neared, fans and reporters realized that Jones...
NFL・11 DAYS AGO