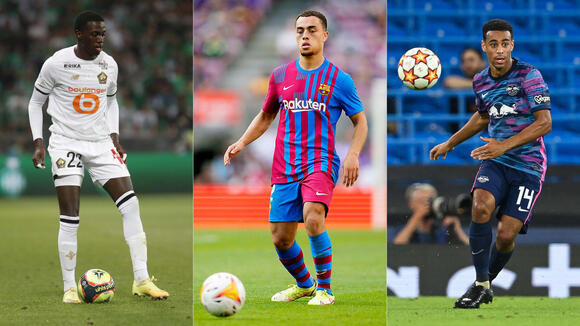 Tyler Adams's absence over the weekend could be cause for concern, but on the other end of the spectrum were uplifting performances from a pair of young stars.

As another U.S. men's national team World Cup qualifying camp beckons, the spotlight gets brighter on those vying to be part of next month's triple header.

Playing through adversity in the form of positive COVID-19 tests, injuries to key players and a team leader being banished for breaking protocol—in addition to the typical rigors of Concacaf qualifying—the U.S. finds itself with a very acceptable five points three games into the 14-match gantlet, all things considered. The adversity only figures to continue ahead of and during the clashes with Jamaica, Panama and Costa Rica, and for good reason. Those same key players, and a potential addition to that group, are hurt, and U.K. travel restrictions could still impact which England-based players are able to make the trip to Panama City for the Oct. 10 match vs. Los Canaleros. On the flip side, players who didn't or weren't able to take part in the September window have shown in recent games for their clubs that they'll be able to assist in the cause if called upon.

First, the potential bad news. The red flag of the weekend comes from Red Bull land, where Tyler Adams missed RB Leipzig's 6–0 thrashing of Hertha Berlin with what the club described very vaguely as a "muscle issue." Whether that was precautionary or a sign of something more detrimental will be known soon enough. The first test will come Tuesday, when Leipzig returns to Champions League action vs. Club Brugge. Another absence there, and then there's something more to be concerned about entering U.S. camp. Adams was one of two players (Miles Robinson being the other) to play all 270 minutes in the U.S.'s opening window, and his importance to the team can't truly be overstated. With Christian Pulisic and Gio Reyna still not yet returning to match action since suffering injuries on international duty, not having a fully operational Adams as well would provide another curveball in planning for the next three games .

Yunus Musah getting a start for Valencia and continuing to build his match fitness and Julian Green starting against his former club, Bayern Munich, could be options Gregg Berhalter turns to if reinforcements in central midfield are needed— with Weston McKennie's status still hanging in the balance as well.

Among the most notable and tangible positive contributions over the weekend, though, were those from Tim Weah, whose assist to Jonathan David and drawn penalty (which David converted) helped Lille to a win and earned Weah a place on Ligue 1's (via WhoScored.com) Team of the Week . Given that Weah was due to be in camp for the first three qualifiers and had to withdraw with a thigh injury, it's a good sign for the U.S. to see him playing—and playing well. Competent wing play and depth out wide haven't always been the U.S.'s forte, and whether it's in a starting or reserve capacity, those are things Weah can certainly bring to the table.

A pair of center backs also continued their re-ascension, with Chris Richards delivering an assist and standing out for Hoffenheim, which dealt Wolfsburg its first Bundesliga loss of the season, while Matt Miazga was a part of Alavés's stunning shutout victory over La Liga champion Atlético Madrid. With John Brooks struggling in the first three matches, Berhalter and the U.S. would benefit from having more reliable figures in the back.

Joe Scally is another defender who could enter the fray, even though he's never featured for the USMNT in as much as a friendly let alone a World Cup qualifier. The 18-year-old fullback helped Borussia Monchengladbach tame and defeat Borussia Dortmund, albeit a Black-and-Yellow side that was down a man for 50 minutes and was missing key figures like Erling Haaland, Marco Reus and Reyna. He previously started and held his own vs. Bayern Munich to open the season, and with the versatility to play on both sides, he's emerged as an attractive candidate to be called in.

Sergiño Dest, another versatile fullback, had his best game of the young season for Barcelona, operating on the left and assisting on the second goal in a 3–0 win over Levante. He has yet to find consistency in his performances on the left for the U.S. and had some troubling play in the opening qualifiers, but a showing like his on Sunday could perhaps serve as a necessary building block.

Another goal came from U.S. striker Jordan Pefok, the in-form Young Boys forward who has scored in three straight games, beginning with his dramatic Champions League match-winner vs. Manchester United. He'll take to the UCL stage again at Atalanta on Wednesday looking to extend that to four for the surprising early group leader. While FC Dallas's Ricardo Pepi surely stated his case to be the U.S.'s starting striker with his performance vs. Honduras, Pefok keeps offering reminders of his capabilities for the Swiss champion.

There remain midweek European matches and another weekend slate before camp convenes in Austin, by which time Berhalter and his staff will know full well what they're up against and who is available for selection as the road to Qatar 2022 continues.

The USA didn't make it easy, but it found a way to get the job done. The U.S. national team gave up a goal after just 60 seconds, but it managed to turn the result around for a big 2-1 World Cup qualifying victory over Costa Rica in Columbus. After...
MLS・12 DAYS AGO
WBAL Radio

Weah, Dest spark US to 2-1 win over Costa Rica in qualifier

COLUMBUS, Ohio (AP) — Sixty seconds in, Costa Rica was celebrating and the U.S. World Cup campaign was spinning out of control. Sergiño Dest and Tim Weah, two young Americans unscarred by the failure of four years ago, got them back on track. Shoelaces untied, Dest curled an 18-yard, left-footed...
FIFA・13 DAYS AGO
Sports Illustrated

Slow starts have plagued the U.S. of late and it can ill afford another one in a game vs. Costa Rica it needs to have on the heels of defeat in Panama.
MLS・13 DAYS AGO
fox5ny.com

The Biggest Danger to the USMNT’s World Cup Hopes

It was the full USMNT experience, or at least as close as you can get to it and still have a happy ending. The United States men’s national team’s 2–1, come-from-behind win over Costa Rica in World Cup qualifying Wednesday was a roller coaster of emotions that nearly matched its pattern in the qualifying tournament as a whole. The game swung U.S. fans from dread to despair to awe to relief, all overlaid on top of a constant baseline hum of worry and undercut a nagging sense that things should be going better. It was fun. Sports are fun.
FIFA・12 DAYS AGO
elisportsnetwork.com

Sergiño Dest’s goal and Tim Weah’s effort lead USMNT to a 2-1 win over Costa Rica in a World Cup qualifier on Wednesday in Columbus, Ohio. Ben Verlander looks back at the predictions he made that didn’t age well including the Chicago White Sox and Milwaukee Brewers making the World Series. ESN FeedsThis post was originally published on this site.
MLS・12 DAYS AGO
goal.com

Adams, Pepi and the USMNT's winners and losers from October's World Cup qualifiers

A six-point window has the U.S. feeling pretty good, despite some ups and downs along the way, including defeat to Panama last week. For the second straight window, the U.S. men's national team have had their low moments in World Cup qualifying. But, for the second straight window, the USMNT have ended the week with a win, offering a bit of hope for what's ahead.
SOCCER・12 DAYS AGO
goal.com

Gregg Berhalter's team bounced back from defeat against Panama and falling behind early in Columbus to secure a vital victory in World Cup qualifying. World Cup qualifying is not for the faint of heart, is it?. On Wednesday, it was another day, another scare for the U.S. men's national team.
SOCCER・12 DAYS AGO

COLUMBUS, Ohio (WSYX) — Coming off its first loss of 2022 World Cup qualifying Sunday night, the US Men's National Team will return to Columbus Wednesday to take on Costa Rica in the final match of the current qualifying window. The US had won back-to-back qualifying matches before Sunday's 1-0...
MLS・15 DAYS AGO
GOBankingRates

In America, soccer is one of the rare sports where the biggest stars in the game are women. It's also one of the only sports where women are paid more than men — at least by the national team if...
MLS・23 HOURS AGO
Sports Illustrated

The U.S. looks to bounce back from defeat in Panama when it hosts Costa Rica in a key World Cup qualifier in Columbus. Follow along here.
MLS・12 DAYS AGO
NBC Sports

The path for the USMNT to the 2022 World Cup in Qatar is underway with their full schedule for CONCACAF’s hexagonal octagonal round of qualifying below. Most notably, USMNT vs Mexico is set for Nov. 12 (matchday 7), at TQL Stadium in Cincinnati, Ohio. The table is set up perfectly...
MLS・12 DAYS AGO

Soccer on TV: The USMNT seeks a bounceback win over Costa Rica in World Cup qualifying

Tuesday, 6 a.m. (Paramount+) Japan has been alarmingly underwhelming in the final round of Asia’s World Cup qualifying tournament, losing at Saudia Arabia and at home to Oman. That has left the Samurai Blue, which feature Liverpool’s Takumi Minamino and Arsenal’s Takehiro Tomiyasu, in third place in one of two six-team groups. Japan is six points out of the top two spots and their automatic qualifying berths.
SOCCER・14 DAYS AGO
The Guardian

Tim Weah scored his second international goal in the 66th minute after Sergiño Dest started the comeback from a first-minute deficit, and the United States rallied past Costa Rica 2-1 on Wednesday night to ease pressure as World Cup qualifying neared the halfway point. Goalkeeper Zack Steffen, one of nine...
MLS・12 DAYS AGO
CBS Sports

The United States men's national team will play its final World Cup qualifier for October on Wednesday night, and it's the most important one yet. The USMNT hosts Costa Rica for a 7 p.m. ET kickoff from Columbus, Ohio. The U.S. comes in off its first loss in qualifying, a 1-0 defeat to Panama on Sunday. Another loss on Wednesday would see Costa Rica jump the U.S. in the Concacaf table, potentially resulting in the Americans sitting outside the top three entering the November matches. A win, on the other hand, would give the team much-needed separation as the most challenging games in qualifying still remain on the schedule. Here's how to watch the match.
MLS・12 DAYS AGO
CBS Sports

The United States men's national team will play the final Concacaf World Cup qualifier of the October window on Wednesday night in what will prove to be a critical showdown against Costa Rica in Columbus, Ohio. The Americans are coming off their worst performance of the cycle, losing 1-0 to Panama on Sunday. Los Ticos just got their first win of qualifying, beating El Salvador 2-1 over the weekend, setting up a clash where Costa Rica can jump the U.S. in the standings with three points. Costa Rica beat the U.S. 2-0 in the states during qualifying for the 2018 World Cup.
MLS・13 DAYS AGO
World Soccer Talk

Los Angeles (AFP) – Timothy Weah set up the winner as the United States came from behind to defeat Costa Rica 2-1 and reignite their 2022 World Cup qualifying campaign on Wednesday. Weah, who plays for French champions Lille, was drafted into the US starting line-up shortly before kick-off after...
SOCCER・12 DAYS AGO