By Matt Johnson
Sportsnaut
8 days ago 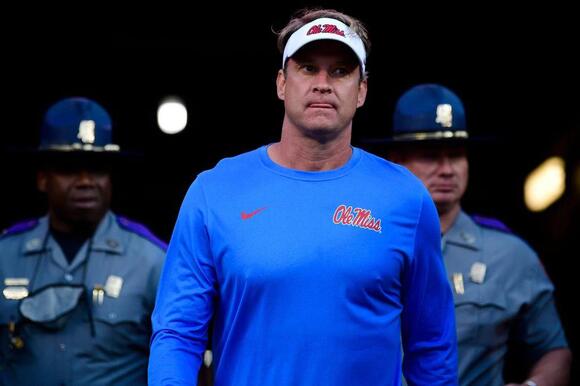 For our breakdown of that game and the other best college football picks for Week 13, continue reading — and see all our bets for the top 25, with game lines courtesy of BetMGM .

College football picks against the spread: Lines for top-25 games

This is what everyone wanted for the Egg Bowl when Lane Kiffin and Mike Leach were hired. The Ole Miss Rebels are a win away from securing a spot in a New Year’s Six bowl game and even have an outside shot at the College Football Playoffs . While the stakes aren’t quite as high for Mississippi State, Leach and the Bulldogs would love nothing more than ruining the Rebels’ dreams.

Mississippi State enters with home-field advantage and that’s a crucial factor in this matchup. Davis Wade Stadium is going to be an absurd, ear-ringing environment on Thanksgiving. Fans also have reason to be confident given the Bulldogs are 7-4 this season, including victories over Kentucky, Texas A&M and Auburn. 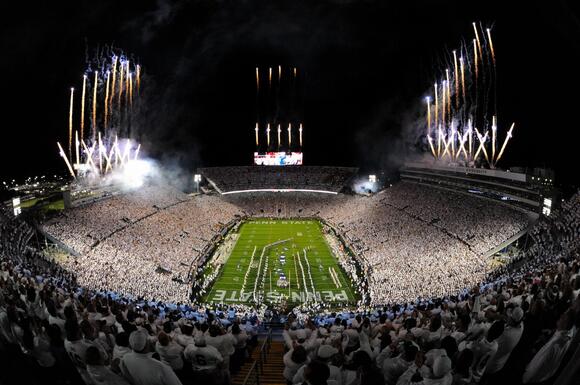 But the third-best passing attack in college football (390.2 yards per game, 35 touchdowns) is going to be tested. Mississippi’s defense held opponents to a 55.86% completion rate in the last three games with the sixth-lowest average passer rating (94.3) allowed during that stretch.

Things will be slightly easier for future NFL quarterback and Matt Corral and this Rebels offense. Ole Miss averages the fifth-most total yards (517.5) per game and can find plenty of success through the air and on the ground. But running the football will be tough against a Bulldogs’ defense allowing the eighth-fewest rushing yards (102.5) per contest. Ultimately, the edge goes to the better quarterback (Corral) and coach (Kiffin) in a close game.

It doesn’t come as much of a surprise to see the San Diego State Aztecs (10-1) as underdogs. Boise State is a more nationally-recognized football program and wins over Fresno State (40-14) and BYU (26-17) shows what this team is capable of. But the Aztecs are the more consistent team in 2021.

The Broncos’ offense isn’t what it used to be. Entering Week 13, Boise State ranks 95th in rushing (126.7 yards per game), 32nd in passing (263.6 ypg), 45th in scoring (30.4 ppg) and its third-down efficiency has dropped in recent weeks. The ground game isn’t an option against San Diego State (77.5 ypg allowed), its secondary has the 14th-lowest average passer rating allowed (114.4) and it holds opponents to a 30.49% third-down conversion rate. On top of all that, punter Matt Araiza will make sure Boise State’s offense has bad field position. 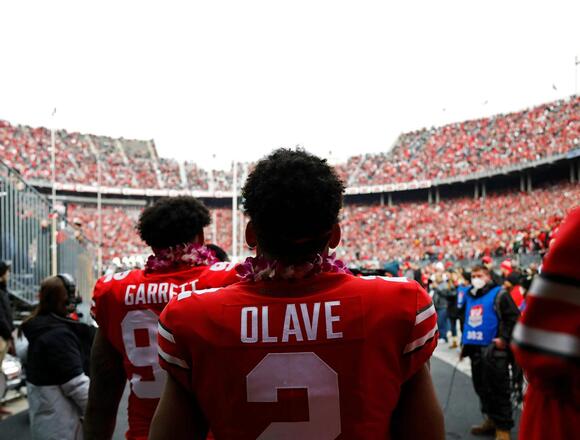 Meanwhile, opponents can move the ball against the Broncos. Boise State is allowing 162.3 rushing yards per game this year and ranks 73rd in third-down conversion rate allowed (40.13%). This defense is dependent on takeaways (9th in the country, 2.1 per game) and the Aztecs rarely cough up the football. Expect a low-scoring duel, but San Diego State’s crowd and its opportunity to play in a huge bowl game provide the extra edge.

This is Jim Harbaugh’s moment. The Michigan Wolverines head coach found himself near the proverbial hot seat entering the year, but a lot has changed. Michigan’s mistakes prevented it from beating Michigan State, but this team has played outstanding football outside of that date. Naturally, the best rivalry game in college football carries even more impact this year. 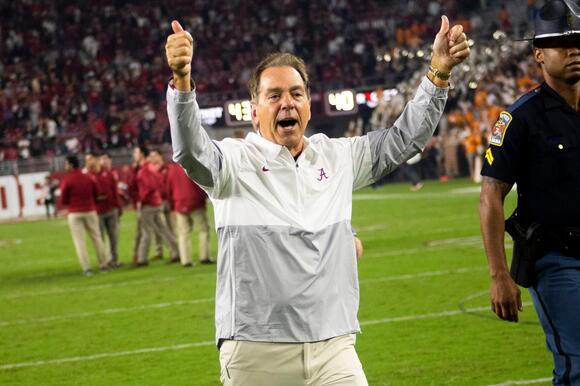 Also Read:
10 highest-paid college football coaches (and are they worth it?)

Michigan’s defense is among the best in the nation statistically. Heading into Saturday’s matchup, the Wolverines allow just 178.4 passing yards per game (8th), have a strong 7.92% sack rate on pass attempts (34th) and they allow just 3.6 yards per attempt. All of that has led to this 10-1 record, but we have some doubts.

This same defense allowed 199 rushing yards to Michigan State, the only top-50 scoring offense they’ve faced in 2021. The success against the pass, partially the result of a secondary facing eight opponents that rank outside the top-90 teams in average passer rating.

C.J. Stroud, the leader in the Heisman Trophy race , is playing at an absurd level right now. It’s a credit to his talent, an offensive line with the sixth-best sack rate allowed (3.16%) and a receiving trio that should be starting on the NFL. There’s just too much firepower for Michigan to stop and we still haven’t seen Harbaugh-led teams come through in big games.

This definitely isn’t shaping up to be an unforgettable Iron Bowl. While these two rivals have provided some college football classics in recent years, no one is expecting that in 2021. One big reason why, this is the first time since 2018 that only Alabama is ranked. 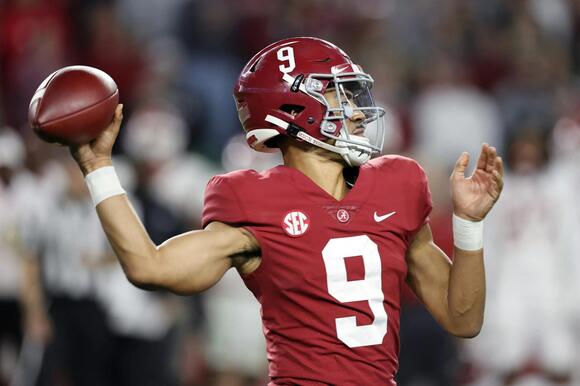 Things looked promising for Auburn at the end of October. Coming off wins against No. 17 Arkansas and No. 10 Ole Miss, the Tigers were right in the middle of top-25 college football rankings . It’s been ugly ever since. Following a 20-3 loss to Texas A&M, a game where Auburn’s offense didn’t show up, the Tigers saw a 28-3 lead against Mississippi State turn into a 43-34 loss. To make matters worse, Bo Nix suffered a season-ending ankle injury.

Nick Saban and the Crimson Tide won’t be kind to Auburn. Bryce Young is in the final weeks of a Heisman race and every touchdown matters. Plus, there is nothing Alabama’s fans want to see more than one of the biggest blowouts in Iron Bowl history. We’ll see that on Saturday.

Lincoln Riley shocked the college football world on Sunday, reportedly heading to USC to be their head coach. The Oklahoma Sooners will now be looking for a new head coach. According to Mac Engel of the Fort Worth Star-Telegram, recently hired TCU head coach Sonny Dykes is somebody to keep a “close eye on” for the job. There is mutual interest between the two parties.
OKLAHOMA STATE・2 DAYS AGO
Larry Brown Sports

Lane Kiffin has a coaching gig in the SEC that many would kill for, but apparently he is willing to leave it if a certain job becomes vacant. Andy Slater of FOX Sports 640 reported on Thursday that Kiffin would be interested in leaving Ole Miss if he had an opportunity to coach at Miami.
COLLEGE SPORTS・12 DAYS AGO
The Spun

On Thursday night, Alabama head coach Nick Saban addressed his team’s running back situation while making his weekly radio appearance. During that discussion, Saban mentioned one of his former players. Since the Crimson Tide are shorthanded at running back, Saban mentioned how Keilan Robinson would be “playing a lot” if...
ALABAMA STATE・12 DAYS AGO

The Ohio State Buckeyes appear to be hitting their stride at the right time, and coach Ryan Day wants his biggest rival to know it. The Buckeyes throttled the Michigan State Spartans 56-7 on Saturday, turning a clash of top ten teams into an uncompetitive blowout. Ohio State jumped out to a 49-0 lead before halftime, and quarterback C.J. Stroud asserted his Heisman Trophy credentials by throwing for 432 yards and six touchdowns.
MICHIGAN STATE・10 DAYS AGO
WHIO Dayton

COLUMBUS — Backup Ohio State quarterback Jack Miller has been suspended from the football team following an arrest on suspicion of OVI Friday morning in Columbus, according to our news partners at WBNS-TV. >>Victim identified in deadly crash involving ex-Raider Henry Ruggs in Las Vegas. State troopers confirmed to the...
OHIO STATE・25 DAYS AGO
On3.com

After putting together a 92-39 record in 12 seasons at Notre Dame, Brian Kelly has left to become the next head coach of the LSU Tigers. Kelly signed a 10-year, $95 million contract with LSU. The news was shocking and has sent waves throughout the college football landscape. According to Paul Finebaum, Brian Kelly bolting Notre Dame for LSU can be attributed to one simple reason: to win a national championship.
NOTRE DAME, IN・23 HOURS AGO

The Heisman race will likely go down to conference championship weekend and which player shines the brightest in that moment.
COLLEGE SPORTS・14 DAYS AGO
On3.com

Lane Kiffin took to Twitter to send a message to Nick Saban and Alabama after their thrilling Iron Bowl victory. As Kiffin celebrates his Egg Bowl victory, he decided to send some congratulations towards his former employer. “Great moves,” tweeted Kiffin. “Congrats on the Iron Bowl Alabama. Good luck in...
ALABAMA STATE・3 DAYS AGO
AOL Corp

Lane Kiffin Rumored To Be ‘Top Candidate’ For Notable Job

There’s no reason for Lane Kiffin to leave Ole Miss right now, but if he’s considering going to a different program, he should have options. Yahoo Sports reporter Dan Wentzel recently reached out to infamous Miami Hurricanes booster Nevin Shapiro for his thoughts on the program’s future. With Manny Diaz on the hot seat, all signs point to the Hurricanes making a major move in the offseason.
COLLEGE SPORTS・13 DAYS AGO

An anonymous Oklahoma Sooners football player has a telling admission on the news of Lincoln Riley leaving for USC. Sunday afternoon, Riley shocked the college football world, when he agreed to leave Oklahoma for Southern California. “My time at OU has included some of the most special years of my...
OKLAHOMA STATE・2 DAYS AGO
rolling out

What Deion Sanders said after sons won title, hugged him in wheelchair (video)

All of the noise ceased for three hours. To end a week where reports surfaced Jackson State football coach Deion Sanders impressed at an interview with TCU, Sanders returned to the sideline to coach the Tigers to a SWAC East division championship on Nov. 13, 2021. Jackson State (9-1, 7-0 SWAC) defeated Southern University (4-6, 3-4) 21-17 after trailing 17-7 in the fourth quarter.
FOOTBALL・16 DAYS AGO
nfldraftdiamonds.com

Houston Mississippi high school football standout Jamarcus Hall was found dead at his home around 7 am this past week. This young man was one of the best football players in the state. It is such a tragic loss for the state of Mississippi and his family/friends. Coroner has not...
MISSISSIPPI STATE・16 DAYS AGO
AllSooners

Oklahoma quarterback Caleb Williams publicly reacted to Sunday’s stunning news of Lincoln Riley’s departure for USC on Twitter, showing support for the man who coached him in a crushing loss to Oklahoma State less than 24 hours earlier. Multiple news outlets are reporting Riley has already accepted the USC job,...
OKLAHOMA STATE・2 DAYS AGO

Where will Alabama come in on Tuesday night in the new College Football Playoff selection committee rankings?. The Crimson Tide improved to 11-1 on Saturday with a thrilling overtime victory over Auburn in the Iron Bowl. However, Alabama dropped in the latest Associated Press top 25 poll. The Crimson Tide...
ALABAMA STATE・2 DAYS AGO
92.9 WTUG

Let's go back to 2019. LSU came to town holding the number 1 ranking in the nation. Alabama looked ready to knock the Tigers off the pedestal. Unfortunately for us, the game ended in the Tigers victorious 46-41. We all felt bad after that loss, but one person certainly was reveling in Tide fans' sorrows.
ALABAMA STATE・27 DAYS AGO
FanSided

How Ed Orgeron embarrassed the LSU Football program on Monday

Ed Orgeron won’t return as LSU Football‘s head coach in 2022. The Tigers and Orgeron agreed last month to part ways at the end of the season. Orgeron has pledged to continue recruiting elite players to LSU and to do what’s best for the program until the end of the season.
COLLEGE SPORTS・29 DAYS AGO
Larry Brown Sports

Report: LSU has made massive offer to top head coach

LSU is expected to pursue several big names for its head coaching vacancy, and one report claims they have already made a mammoth offer to one of the top coaches in the nation. Jake Crain, a former college football coach who used to work for Rivals.com, said on his “The...
NFL・13 DAYS AGO