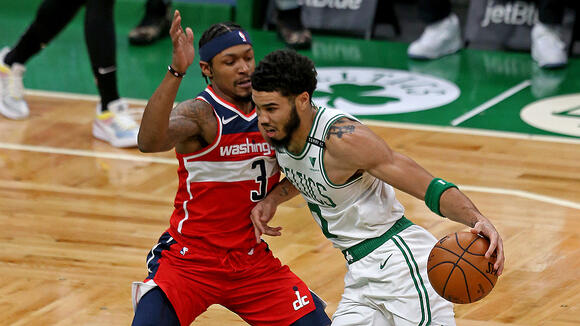 BOSTON (CBS) — COVID-19 was an unavoidable topic at Celtics media day on Monday. It was at the forefront when it was revealed that new head coach Ime Udoka was not present as he finishes up his 10-day isolation following his breakthrough case.

Udoka, who was vaccinated, will be back for the start of training camp on Tuesday. But he spent his first media day as Celtics head coach chatting with reporters via Zoom.

“I’m feeling normal, as normal as I can I guess. I have been asymptomatic for the most part, other than a slight headache 10 days ago that I would have brushed off had I not been informed I was a close contact with a positive case,” Udoka said Monday. “I’m looking forward to starting tomorrow. I think it will be a seamless transition; I was around the guys a lot this summer.”

“He was vaccinated so it hasn’t hit him like it’s hit others that we read about all over the country,” Celtics president of basketball ops. Brad Stevens said of Udoka. “As far as missing time, he’s good at connecting with people. He does it over FaceTime, text, many different ways. He was working at 2 a.m. from Tokyo helping us with free agents. Even when he isn’t here, he’s working and very invested. I’m just very glad that his health is OK.”

Vaccination was the other topic of conversation, as Stevens also touched returning big man Enes Kanter telling Rolling Stone that Boston has “multiple” players who have yet to receive even a first dose of the vaccine as of last Thursday.

“Our hope is that we get as close to 100 percent vaccinated as soon as possible,” said Stevens. “That’s our hope and our desire. We’ll work on our end with what we can do and from an educational standpoint with our organization. But everyone has to make that decision for themselves.”

Boston guard Marcus Smart, who was the first player to test positive for the virus in 2020, said that he is vaccinated on Monday. But he understands players who choose not to get the shots.

Celtics star Jayson Tatum, who was sidelined with COVID last season and had to use an inhaler after his bout, confirmed that he is vaccinated. But he isn’t going to criticize those who are not.

“It’s your own decision and I fully understand the concerns of those who aren’t vaccinated or don’t want to be, and I understand those — like myself — who did. It’s your own health and no one should be judged one way or another based on their decision,” said Tatum.

“I think it’s a personal decision and have my own thoughts about it, but I respect my teammates’ decision,” Jaylen Brown said on the vaccination. “I know everyone has an opinion on it, but it’s a personal choice.”

Allen Iverson Learned His Lesson After Giving A Celtics' Ball Boy $2,000 To Buy Him Some Beer: "That's What My Money Bought You?"

Allen Iverson is one of the most legendary figures in NBA history. One of the most important figures in the NBA, Iverson's impact on the game is taken for granted on several occasions. Iverson's play on the court was truly incredible. He helped reinvigorate the 76ers franchise in the early...
NBA・24 DAYS AGO
fadeawayworld.net

Hindsight is always perfect, and NBA contracts are often looked back on as a positive or negative experience. Players are normally paid for what they deserve, but there are cases where there are very bad contracts being given out. So much so, that even retired NBA players are being paid until this day.
NBA・26 DAYS AGO
Boston Herald

Wednesday’s season opener in New York will have an odd sense of familiarity coming from the other bench, now that Kemba Walker and Evan Fournier are Knicks. Jayson Tatum is looking forward to the reunion. “I’m super excited to play New York in our first game, playing against Kemba and...
NBA・1 DAY AGO
Sportsnaut

The Boston Celtics waived forward Jabari Parker, according to multiple reports on Sunday. Parker, 26, reportedly had a $1.1 million
NBA・21 HOURS AGO

Jayson Tatum started his fifth preseason with a powerful statement on Monday, throwing down a massive poster dunk on Magic big man Wendell Carter Jr. in the third quarter. The Celtics ran a set designed to create an isolation mismatch between Tatum and Gary Harris in the mid post. Tatum pump faked and got Harris off balance, then drove past him. Carter Jr. met Tatum at the rim, but Tatum got off the ground first and elevated high above Carter. The fifth-year big man appeared to get a hand on the ball, but Tatum powered the ball through the net, then turned and flexed at the crowd.
NBA・13 DAYS AGO
celticslife.com

NBC Sports Boston's Chris Forsberg interviews Celtics all-stars' Jayson Tatum and Jaylen Brown. The main topic of discussion is the rumor that the two of them aren't friends. Here is what the Jay's had to say on the matter:
NBA・11 DAYS AGO
chatsports.com

New season, new head coach, and apparently, a new mindset for Jayson Tatum. After a summer of discussions surrounding Tatum's playmaking abilities and a potential jump in that regard, it was his work on the low block that stood out in the Boston Celtics' first preseason game against the Orlando Magic.
NBA・13 DAYS AGO
NBA Game Highlights

Finishing and free throws are the missing links for Jayson Tatum

Rule #1 of training camp: Always take Media Day with a grain of salt. Hidden within the canned answers are occasional gems, including one mentioned by Jayson Tatum. Tatum spoke about his areas of improvement and focus this offseason: “getting downhill and shooting more free throws.” Adding mass so his body holds up when finishing, another summer checklist item for Deuce’s daddy, will have residual effects on his interior game.
BASKETBALL・14 DAYS AGO
Bleacher Report

Boston Celtics guard Jaylen Brown has tested positive for COVID-19. The team announced Brown's diagnosis Friday and said he is asymptomatic and quarantining. Brown hasn't said whether he has been vaccinated. "I think it's a personal decision and have my own thoughts about it, but I respect my teammates' decision,"...
NBA・9 DAYS AGO
CBS Sports

Celtics' Enes Kanter on LeBron James declining to be public advocate for COVID-19 vaccine: 'It's ridiculous'

The COVID-19 vaccine has been the hot topic over the first week of NBA training camps. While most players have been vaccinated, there are still some notable holdouts and the league has not yet reached the 100 percent vaccination rate they are striving towards. While being vaccinated is obviously important...
NBA・14 DAYS AGO
basketball-addict.com

Long before they were a superstar duo for the Boston Celtics, Jaylen Brown and Jayson Tatum crossed paths in the AAU circuit and at the University of Kansas on visits. There’s even a photo of the two from that weekend in 2014 that has popped up on social media on occasion. It’s wild to think […] The post Celtics star Jaylen Brown hilariously exposes Jayson Tatum as his fanboy in 2014 appeared first on ClutchPoints.
NBA・9 DAYS AGO

‘That’s my man’: What Jayson Tatum and Jaylen Brown said about their friendship

What would it take for Jayson Tatum to win MVP?

Jayson Tatum took another leap forward last season. Career-highs in points (26.4), rebounds (7.4), and assists (4.3) per game in a group populated by only four other players, all of whom are widely regarded among the best in the NBA. If Tatum has yet to officially ascend to superstar status,...
NBA・12 DAYS AGO
chatsports.com

Personally I'd argue that Jayson Tatum is already an NBA "superstar," based on all his 50 point games and performance so far. If you have a stricter definition of superstar where you require a player to have All-NBA 1st or 2nd team selections under their belt and more team success as the unquestioned star of your team, I can understand how you don't have him listed as a superstar right now.
NBA・8 DAYS AGO
USA TODAY Sports Media Group

Fans of the Boston Celtics who watched the team’s 98-97 win against the Orlando Magic at TD Garden in the first preseason game likely think of All-Star forward Jayson Tatum’s powerful baseline dunk when they think of his game against the Magic Monday night. While it was perhaps the most...
NBA・13 DAYS AGO
MassLive.com

The first week of Celtics training camp is in the books under new head coach Ime Udoka with the team set to begin a slate of four preseason games over the next 12 days beginning with the Orlando Magic on Monday night. Amid an offseason of change for the roster,...
NBA・14 DAYS AGO
CBS Sports

Tatum managed 18 points (6-16 FG, 1-4 3Pt, 5-5 FT), nine rebounds, three steals and two assists during Monday's preseason win over Orlando. Although a little rusty shooting the ball, Tatum ultimately finished with a superb overall performance, as the forward was one rebound shy of a double-double. So far, the former Duke Blue Devil has improved in each of his four seasons with Boston. Tatum posted career highs with 26.4 points, 7.4 rebounds and 4.3 assists per contest across 64 games played last year. Heading into his age-23 season, Tatum should only continue to make strides as a scorer, playmaker and defender. In most season-long leagues, he makes for an excellent, high-floor selection in the latter half of the first round or early second round.
NBA・13 DAYS AGO
Daily Herald

BOSTON -- Jayson Tatum is quickly rounding into regular-season form. The Boston forward had 20 points, nine rebounds and seven assists to help the Celtics beat the Toronto Raptors 113-111 on Saturday night in a preseason game. Tatum still has a little fine-tuning to do though after turning the ball...
NBA・8 DAYS AGO
CBS Sports

In some ways, the 2021-22 Boston Celtics feel like, and are, a completely different organization from last season. Brad Stevens, who coached the Celtics for eight seasons, guiding them to three conference finals appearances, moved upstairs to replace Danny Ainge as the new basketball of operations, while Ime Udoka replaces Stevens on the bench. A big name in Kemba Walker is out, traded to the New York Knicks. A familiar face in Al Horford is back, joined by Dennis Schroder, Josh Richardson and Enes Kanter as the most notable additions.
NBA・10 DAYS AGO