By Ryan Chapman
AllSooners
20 days ago 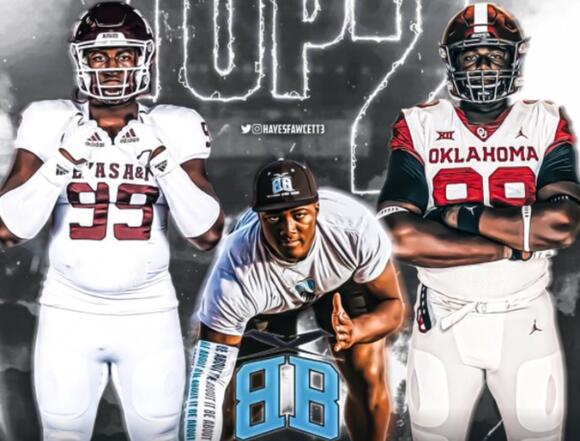 The No. 10-overall recruit in SI All-American’s Class of 2022 SI99 is expected to miss the rest of the season with a hand injury, SIAA’s John Garcia Jr. reported on Monday morning.

Brownlow-Dindy reportedly sustained the injury during a Sept. 17 contest where his Lakeland High School Dreadnaughts faced off against Lake Gibson High School.

The elite prospect then underwent surgery this past Friday.

The 6-foot-3, 280-pound defensive lineman announced last month that his recruitment was down to the Oklahoma Sooners and the Texas A&M Aggies, and he would be a major pickup for OU considering how far the Sooner defense has come under defensive coordinator Alex Grinch.

Brownlow-Dindy has yet to set an official commitment date, but the next time he steps foot on a football field in pads ready to play, it may be on the college campus of his choosing.

Deion Sanders is currently the head coach at Jackson State in Mississippi. Some believe that he’ll ultimately end up in Tallahassee, leading Florida State, where he starred in college. However, could another major program hire Coach Prime before that?. FOX announcer Gus Johnson said on Sunday afternoon that he’s heard...
COLLEGE SPORTS・27 DAYS AGO
On3.com

While the dominant storyline around Alabama this week is the top-15 matchup against Ole Miss in Tuscaloosa on Saturday, college football fans have learned a fair amount about Alabama head coach Nick Saban’s family, too. On Thursday’s weekly “Hey Coach & The Nick Saban Show,” the Alabama coach shed some...
FOOTBALL・15 DAYS AGO
The Spun

We’ve heard a lot from Urban Meyer regarding the video that went viral last weekend. The Jacksonville Jaguars head coach was spotted in a bar getting danced on by a young woman who is not his wife. Meyer has since apologized multiple times, admitting what he did was stupid. We...
NFL・7 DAYS AGO
The Spun

The recruitment of 2023 five-star quarterback Arch Manning could end up coming down to two prominent schools. While Nick Saban tried to get a not-so-subtle pitch in to the Manning family on Monday night, the race for the quarterback prodigy might come down to two other schools. Georgia and Texas,...
FOOTBALL・17 DAYS AGO

Alabama and Georgia remain the top two teams in The Associated Press college football poll after a week in which nine ranked teams lost. Auburn (4-1) has risen for the second straight week. The Tigers are now No. 18 with their 24-19 victory at LSU. Alabama (5-0) dismantled Ole Miss 42-21, though the Crimson Tide lost five first-place votes to second-ranked Georgia, which shut out Arkansas 37-0.
ALABAMA STATE・13 DAYS AGO
FanSided

3 quarterbacks who should be benched after Week 2

While injuries plagued a few starting quarterbacks around the league on Sunday, there were three starters in particular that performed less than average. After the first slate of games drew to a close on Sunday afternoon, there were a number of starting quarterbacks that suffered injuries. Tua Tagovailoa, Andy Dalton, Tyrod Taylor and Carson Wentz were all hit by injuries that caused them to be out of the game.
NFL・27 DAYS AGO
The Clemson Insider

Ohio State head coach Ryan Day delivered some tough news as the Buckeyes head into their Week 4 matchup against Akron during his weekly radio show Thursday. In all likelihood, there will be a new (...)
OHIO STATE・23 DAYS AGO
Whiskey Riff

Arguably the most electric, while also the most hated, high school quarterback of all time. The man went to Ohio State and couldn’t win the starting job there, then went to Miami and was third string on the depth chart, and now he’s riding the bench at Utah. And now,...
OKLAHOMA STATE・2 DAYS AGO

Before every single episode of College GameDay goes live on ESPN, Kirk Herbstreit interviews Lee Corso to get his thoughts on some of the top games in the country. This Saturday morning, Corso revealed his pick to win the national championship this season. Herbstreit asked Corso if he believes the...
COLLEGE SPORTS・8 DAYS AGO
Larry Brown Sports

Nick Saban is known for being short with the media during the week leading up to games, but the Alabama coach made it clear this week that his irritability is nothing personal. With Alabama getting set to face Texas A&M, Saban was asked by a reporter on Thursday if he...
COLLEGE SPORTS・9 DAYS AGO
The Spun

Iowa head coach Kirk Ferentz threw gasoline on the fire today with his comments regarding Hawkeye fans booing injured Penn State players last weekend. During Iowa’s win over the Nittany Lions, several PSU players went down with injuries. Some Iowa fans booed when it happened, implying that some of the injuries were illegitimate.
COLLEGE SPORTS・4 DAYS AGO
saturdaydownsouth.com

Georgia Football coverage presented by — Many college football observers consider the 2021 Georgia Bulldogs the real deal. Mark Stoops can be included in that group. After Kentucky’s 30-13 loss to No. 1 UGA, Stoops paid Kirby Smart’s squad the ultimate compliment. The 2021 college football season has been a...
GEORGIA STATE・14 HOURS AGO
On3.com

Oklahoma quarterback Spencer Rattler might be losing his job to true freshman Caleb Williams, but for purposes of NIL deals, that might not matter too much. The most marketable athlete in college sports based on social media statistics entered the season as the favorite to win the Heisman Trophy. His position as the starter at “QB U” earned him two cars, gifted to the recognizable face by Fowler Automotive Group near Oklahoma City.
OKLAHOMA STATE・2 DAYS AGO
Sports Illustrated

Mark Stoops called a timeout with seven seconds to go on third-and-goal, and the Wildcats were able to convert for a touchdown to cover the 21.5-point spread.
KENTUCKY STATE・13 HOURS AGO
saturdaydownsouth.com

First and 10: Alabama can't play defense. Why? Because Kirby Smart is at Georgia

There’s no real mystery here. Want to know why Alabama doesn’t play defense like it used to?. In the aftermath of Alabama getting exposed again this season in a 41-38 loss to Texas A&M, there are legitimate questions about the state of the Crimson Tide defense over the past 4 seasons – and if it might just keep Nick Saban’s team from the College Football Playoff for the second time in 3 seasons.
ALABAMA STATE・6 DAYS AGO
USA TODAY Sports Media Group

Spencer Rattler has a message for Oklahoma fans who booed him

Yet again, Oklahoma narrowly escaped an upset Saturday, this time at home against West Virginia. Sooners quarterback Spencer Rattler struggled at times throughout the 16-13 victory, leading the home crowd to boo him and even chant for his backup to enter the game instead. After the game, Rattler had a...
OKLAHOMA STATE・21 DAYS AGO
College Football News

Week 6 of the 2021 college football season was by far the craziest of the year thus far, as Saturday’s slate featured multiple shocking outcomes. The No. 1, No. 4 and No. 10 teams in the country all lost, while a handful of the nation’s other top programs were pushed to the brink.
COLLEGE SPORTS・6 DAYS AGO
The Spun

When Christian McCaffrey went down with a hamstring injury in Week 3, the Carolina Panthers didn’t place their star back on the injured reserve. It was an optimistic move by the organization. Unfortunately, McCaffrey’s recovery is taking longer than expected. The Panthers placed McCaffrey, who’s missed two straight games with...
NFL・19 HOURS AGO
The Spun