By Callie Ahlgrim
Insider
26 days ago 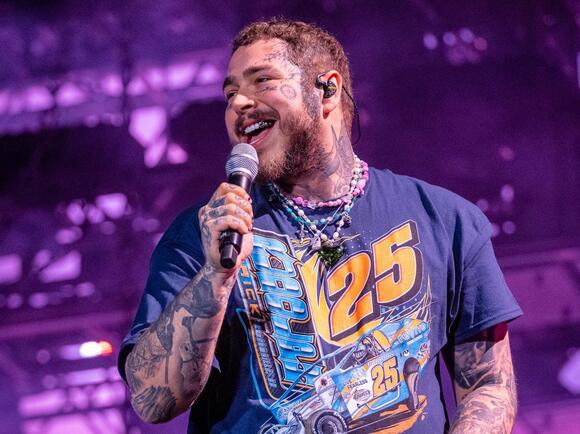 Post Malone delighted fans on Sunday as the final headliner for Governors Ball music festival in New York City, using both a set list stuffed with massive hits and a hefty dose of humility.

Just before the Grammy nominee performed his No. 1 hit "Circles," he took a moment to warn the crowd about his limited vocal range.

"If I sound like shit, it's not my fault," he added. "Someone spilled some beer on the computer or something."

Malone was similarly self-effacing throughout his hour-long set, which was scheduled to begin at 8:45 p.m.

Instead, Malone took the stage at 9:05 p.m., telling fans: "I'm here to sing some shitty songs and get fucked up."

Shortly after playing his opening song, "Wow," he chugged a drink in a red cup at the urging of the crowd.

Later, just before launching into an acoustic version of "Stay," he joked that it would be "the most boring part of the show."

"If you have to take a piss, go now," he said as the crowd laughed. "I've been fucking up a lot of songs tonight, I hope I don't fuck this one up."

The performance ended slightly after the event's cut-off time of 10 p.m. Malone told fans he was being asked to wrap up, but decided to play his two final songs regardless, "Rockstar" and "Congratulations."

Miley Cyrus surprised fans when she gatecrashed Megan Thee Stallion’s Austin City Limits performance yesterday (October 1) – you can see footage below. Cyrus, who headlined the Texas festival’s Friday line-up, ran on stage during Megan’s set to join other fans in what looked like a mid-set twerking competition. After showing a few moves and hugging Megan, Cyrus quickly ran back offstage.
CELEBRITIES・21 DAYS AGO
KGUN 9

Being a street musician can be thankless work. Many times, people just walk right by without pausing to notice or enjoy the musical talents of the performer who’s putting themselves on display. For Boston street musician Radha Rao, her focus has always been about impacting people and connecting with them in a meaningful way and she did so with a bona fide pop superstar who happened to see her in action recently.
MUSIC・3 DAYS AGO
b975.com

Harry Styles has fans sing “Happy Birthday” to his mom

If you thought you couldn’t love Harry Styles any more, just watch this video of him giving his mom a sweet birthday shout-out while on tour. In a fan-captured clip from his tour stop in Uncasville, CT on Thursday, Harry asks the crowd to help him sing “Happy Birthday” to his mom, Anne Twist.
MUSIC・1 DAY AGO
MadameNoire

The drop of Megan's latest Coach campaign comes less than a week after it was announced that the Grammy-winning rapper was the latest artist to partner with Nike for its "Play New" campaign.
NEW YORK CITY, NY・23 DAYS AGO

As fans eagerly await new music from Normani, the 'Wild Side' singer admits she has plenty of unreleased tracks to choose from.
MUSIC・2 DAYS AGO
iHeartRadio

Megan Thee Stallion Promises 'Something For The Hotties' With New Release

Megan Thee Stallion's new release is 'Something for the Hotties' as she dives into her archives and reinvents her old freestyles and unreleased singles.
MUSIC・1 DAY AGO
hotnewhiphop.com

Jonah Hill is one of the funniest actors of his generation and has recently been making the shift into more serious, less comedic roles and films. From Superbad to The Wolf of Wall Street to the 21 Jump Street series, however, so much commentary surrounding Hill has not focused on his acting or direction chops, but rather on his body.
CELEBRITIES・9 DAYS AGO
dexerto.com

Pokemon fans were outraged after it was revealed that pop stars Katy Perry & Post Malone are getting their own official Pokemon cards. The special Trading Card Game promos have some Nintendo collectors angry. To celebrate its 25th anniversary, The Pokemon Company teamed up with chart-topping artists such as Mabel...
LIFESTYLE・7 DAYS AGO

Before becoming the Duchess of Sussex, Meghan Markle initially rose to prominence through her time in Tinseltown. Starring as Rachel Zane in USA Network's "Suits," the former actor appeared in the show's first seven seasons before uprooting her life for royalty. She has also made appearances in prominent programs such as "90210," "CSI: NY," and "CSI: Miami," along with film appearances in "Get Him to the Greek" and "Horrible Bosses."
CELEBRITIES・11 DAYS AGO
Insider

Singer Tommy DeBarge, a member of R&B band Switch, has died aged 64. As the news of his death is shared online fans have wondered about Tommy DeBarge‘s wife and marriages. Switch vocalist and guitarist Tommy DeBarge’s first wife was Yolanda Payne, who was fondly known under the nickname Duck/Ducky.
CELEBRITIES・1 DAY AGO

LISTEN LIVE. LIKE US ON FACEBOOK. FOLLOW US ON TWITTER. Megan Thee Stallion looked absolutely snatched in a custom Zigman corset on her Instagram feed, and we can’t stop staring at it!. The “Hot Girl Summer” rapper posted a few sexy pics in the white belted corset, and of course...
APPAREL・18 DAYS AGO
Hello Magazine

Vin Diesel has walked Meadow Walker down the aisle, eight years after the death of her father Paul Walker. Paul and Vin starred together in the Fast and Furious franchise, and Vin was named her godfather at her birth. Now, Meadow has revealed the actor walked her down the aisle during her October wedding to actor Louis Thornton-Allan.
CELEBRITIES・1 DAY AGO
thefocus.news

Is Chance Chancellor coming back to The Young And The Restless?

Chance Chancellor left the popular daytime soap opera The Young & The Restless in early 2021; Many fans think he could be coming back to Genoa City and here’s why. February 2021 marked Chance Chancellor aka Donny Boaz’s last appearance on the daytime drama and it appears the character won’t be recast.
TV & VIDEOS・1 DAY AGO
92.7 The Block

We are quite sure that Serena's husband, Alexis Ohanian, could not keep his eyes off his fabulous wife in this body-hugging dress.
TENNIS・2 DAYS AGO

Al Roker's wife Deborah Roberts has sent her support to Celine Dion after she revealed health issues have forced her to postpone her upcoming Las Vegas residency. The ABC News star took to Instagram shortly after Celine broke the devastating news to her fans, sharing a throwback photo of the pair together alongside a sweet message in which she wished the singer a "swift recovery".
CELEBRITIES・2 DAYS AGO
firstsportz.com

Serena Williams is a name to reckon with in the world of tennis. What she has achieved is nothing short of extraordinary and it won’t be a surprise if she goes on to add more feathers to her cap. However, Serena hasn’t been in the best of forms in recent times.
CANCER・1 DAY AGO
hotnewhiphop.com

50 Cent's latest television series to take off has been BMF, which is based on the real-life story of brothers Demetrius "Big Meech" Flenory and Terry "Southwest T" Flenory. The two ran one of the country's most notorious drug enterprises, Black Mafia Family, out of Detroit. Many rap acts, including Jeezy, were involved with the group, and now there's a whole show depicting what went down behind the scenes with the Flenory brothers.
TV & VIDEOS・1 DAY AGO
The Hollywood Gossip

You know the saying about how the best things come to those who wait?. Well, Meri Brown is here with an important variation. She believes nothing good ever comes to those who sit around and wait to find out what might come next, as opposed to appreciating all they already possess.
CELEBRITIES・2 DAYS AGO