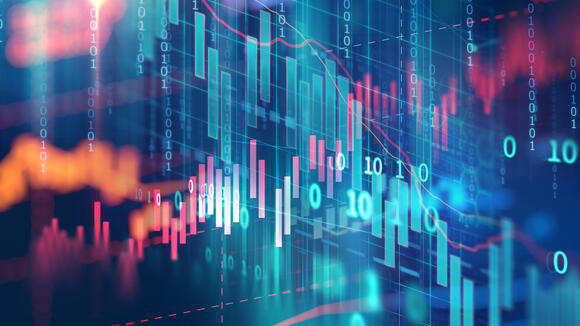 The futures were mixed Monday after last week's topsy-turvy trading that saw massive selling give way to the two largest risk-off days for the market in six months on Wednesday and Thursday. In fact, after hitting the elusive 5% decline mark, between Monday's intraday low and Thursday's intraday high, the S&P 500 was up 3.7%. Investors and traders now seem certain that the Federal Reserve will start the tapering process on the massive quantitative easing program in November and Fed Chair Powell maintains that all the purchases will be concluded by this time next year.

While the recent consumer price index and retail sales data has tempered some of the inflation and growth worries, mounting stagflation concerns continued to pick up, amid the ongoing supply chain and input pressures and recovery headwinds from the spread of the Delta variant. Federal Reserve assurances that rates will remain accommodative continue to provide a tailwind for equities though.

These are the top analyst upgrades, downgrades and initiations seen on Monday, September 27, 2021.

Altice USA Inc. ( NASDAQ: ATUS ): Credit Suisse downgraded the stock to Neutral from Outperform and slashed the target price to $24 from $46. The consensus target is $40.07. The stock closed Friday at $20.58, after falling almost 7% on the day after the CEO admitted that some broadband customers are heading for the exits.
ALSO READ: 5 European Dividend Aristocrats Offer Huge Income and Growth Potential
Box Inc. ( NYSE: BOX ): JMP Securities raised its Market Perform rating to Market Outperform with a $32 price target. The consensus target is $28. The stock ended trading on Friday at $25.24.

Camden Property Trust ( NYSE: CPT ): BofA Securities upgraded the real estate giant to Buy from Neutral and lifted the target price to $178 from $160. The consensus price objective is $158.70. The stock closed on Friday at $149.75.

Chewy Inc. ( NYSE: CHWY ): Credit Suisse resumed coverage of the online pet food and accessories company with an Outperform rating and a $121 price objective. The consensus target is just $93.20. The stock retreated almost 5% on Friday to close at $69.83.

Cigna Corp. ( NYSE: CI ): SVB Leerink started coverage of the health care giant with a Market Perform rating and a $220 price target. The consensus target is $263.32. The final trade for Friday was reported at $203.89.

ConocoPhillips ( NYSE: COP ): Goldman Sachs lifted the price target on the Buy-rated integrated oil leader to $76 from $68. The posted consensus target is $75.68. The stock closed on Friday at $65.02.

DoubleDown Interactive Co. Ltd. (NYSE: DDI): B. Riley Securities began coverage with a Buy rating and a $30 price target. No consensus price objective was available. The shares closed at $17.53 on Friday.
ALSO READ: What’s Up With Apple: Production Slowdowns in China, TV+ Subscribers and More
Fortinet Inc. ( NASDAQ: FTNT ): Goldman Sachs raised its target price on the cybersecurity stock to $335 from $300 while reiterating a Buy rating. The consensus target is $300.12. The final trade for Friday was reported at $311.90.

Hyatt Hotels Corp. ( NYSE: H ): BofA Securities downgraded the shares to Underperform from Neutral and have an $85 price target. The consensus target is $81.80. The stock closed on Friday at $79.76, which was up almost 4% for the day.

Icon PLC (NASDAQ: ICLR): JPMorgan upgraded it to Overweight from Neutral and also raised the target price to $320 from $230. The consensus target is just $255.23, and the shares ended last week at $283.04.
IronNet Inc. ( NASDAQ: IRNT ): Needham started coverage with a Buy rating and a $29 price target. No consensus target was available. The stock popped over 8% on Friday and closed at $25.76. Shares were down close to 2% in Monday's premarket.

Peloton Interactive Inc. ( NASDAQ: PTON ): This is the Zacks Bear of the Day stock. The analyst points out that it has lost 46% of its value in the past eight months and a half months. Shares closed most recently at $92.64 apiece and have a consensus price target of $129.67.

Qorvo Inc. ( NASDAQ: QRVO ): This chip powerhouse is striving to digitally connect the world, says Zacks, which selected it as the Bull of the Day stock. Shares last closed at $174.05 and have a consensus price target of $220.48, which would be an all-time high.

ServiceNow Inc. ( NYSE: NOW ): Summit Insights resumed coverage with a Buy rating and a $750 target price. This compares with the much lower $664.59 consensus target and Friday’s closing price of $666.31 a share.

Yandex N.V. ( NASDAQ: YNDX ): UBS upgraded the stock to Buy from Neutral and raised the price target to $111 from $77.50. The stock has traded between $55.62 and $82.62 in the past year and closed Friday at $80.20. The shares were up over 2% in the premarket.
ALSO READ: 5 Blazing Hot and Well-Known Stocks Under $10 With Huge Upside Potential
24/7 Wall St. screened the top European Dividend Aristocrats looking for the most liquid and well-known names for investors seeking income and a degree of diversification away from the American indexes. Five stocks trade on American exchanges and pay very dependable dividends.

These are five stocks for aggressive investors looking to get share count leverage on companies that have sizable upside potential. While not suited for all investors, they are not penny stocks with absolutely no track record or liquidity, and Wall Street firms do have research coverage.
STOCKS・17 HOURS AGO
investing.com

Take Advantage of Skyrocketing Lithium Prices by Buying These 3 Stocks

The element lithium, which is a vital component of electric vehicle (EV) batteries, has become increasingly popular as countries push for cleaner energy sources. Moreover, because EV companies are investing to increase their production, the demand for lithium is rising. Consequently, lithium prices have recently skyrocketed. Therefore, we think fundamentally sound lithium stocks Albemarle Corp (NYSE:ALB), Livent Corp (NYSE:LTHM), and Lithium Americas (NYSE:LAC) could be solid buys now to take advantage of the rising prices. So, let's discuss.Lithium has become increasingly popular, given zero-emission initiatives worldwide and the growing electric vehicle (EV) market. Lithium is a key component used in electric vehicle (EV) batteries. The U.S. is narrowing the gap with China, which dominates the $46 billion lithium-ion battery industry, supported by President Biden’s emphasis on EV growth and significant investments by its automotive industry giants. Consulting firm AlixPartners expects companies to invest $330 billion globally in the EV supply chain over the next five years.
STOCKS・1 DAY AGO
MarketWatch

Not even supply-chain worries can get a Tesla bull down, with analysts on Wall Street peeking under the hood of the electric car makers latest results and still liking most of what they see.
WASHINGTON, DC・14 HOURS AGO
MarketWatch

Where ARKF Stands After Q3

24/7 Wall St. takes a look at one of Cathie Wood's ARK Invest funds. The third quarter for this ETF was somewhat hampered by a weak September, but it stands to benefit from here.
STOCKS・1 DAY AGO
24/7 Wall St.

24/7 Wall St. takes a look at one of Cathie Wood's Ark Invest funds. The third quarter for this ETF was somewhat rough, but the fund seems poised to benefit from here.
STOCKS・1 DAY AGO
Benzinga

Analysts downgraded ratings and lowered their price targets on Intel Corp (NASDAQ:INTC) following its Q3 2021 earnings results. Mizuho analyst Vijay Rakesh downgraded to Neutral from Buy with a PT of $55, down from $70, implying a 1.79% downside based on Thursday's closing price of $56.00. On its earnings call,...
STOCKS・1 DAY AGO

Investors shouldn't be surprised by a 10% stock-market correction in the fourth quarter, though a bear market may still be years away, says a top Wall Street analyst.
STOCKS・2 DAYS AGO
NWI.com

A second analyst has downgraded U.S. Steel stock after Goldman Sachs lowered its rating from "neutral" to "sell" following the first decline in steel prices in more than a year. Morgan Stanley double downgraded the steelmaker's stock from underweight to overweight. It slashed its price target for U.S. Steel from...
INDUSTRY・2 DAYS AGO
MarketWatch

Shares of International Business Machines Corp. dove 5.4% in premarket trading Thursday, in the wake of the technology company's disappointing third-quarter results, and was by far the biggest drag on the Dow Jones Industrial Average ahead of the open. The implied price decline in IBM's stock would shave about 51 points off the Dow's price, while Dow futures shed 98 points or 0.3%, with 23 of 30 components trading lower. The next biggest Dow decliner in the premarket was Caterpillar Inc.'s stock, which slipped 1.1% and implied a 15-point weight on the Dow's price. The biggest gainer was Dow Inc.'s stock , which rose 1.5%, and would add about 6 points to the Dow's price, after the chemical and specialty materials company beat third-quarter profit and revenue forecasts.
STOCKS・2 DAYS AGO
Benzinga

For Coterra Energy Inc (NYSE:CTRA), Piper Sandler upgraded the previous rating of Neutral to Overweight. The current stock performance of Coterra Energy shows a 52-week-high of $14.37 and a 52-week-low of $6.37. Moreover, at the end of the last trading period, the closing price was at $21.41. According to Berenberg,...
STOCKS・2 DAYS AGO
The Motley Fool

Disney Stock Gets Downgrade From Analyst on Disney+ Concern

Disney CEO said Disney+ is facing headwinds in subscriber growth in the near term. The analyst thinks the company might lower long-term targets for the streaming service. Disney stock is trading at its lowest forward price-to-earnings ratio dating back to January 2020. Surprisingly, 2021 has been a more challenging year...
MARKETS・2 DAYS AGO
24/7 Wall St.

Here's a look at meme stocks that have been moving Thursday morning, plus a peek at trading in the SPAC that plans a merger with former President Trump's still non-existent media company.
STOCKS・2 DAYS AGO
24/7 Wall St.

A bitcoin mining company's IPO and a SPAC merger for a former U.S. president's social media company top the list of Wednesday's market news. As for meme stocks, there was news there, too.
STOCKS・2 DAYS AGO
24/7 Wall St.

These five top stocks on the Goldman Sachs European Conviction List all trade on American exchanges, have liquidity and pay very dependable dividends. They are outstanding total return ideas now and are positioned well for the rest of 2021 and beyond.
STOCKS・2 DAYS AGO
24/7 Wall St.

A Look at ARK Invest’s Q3 for ARKQ

24/7 Wall St. is taking a look into the ARK Autonomous Technology and Robotics ETF ahead of the third-quarter call.
STOCKS・2 DAYS AGO
MarketWatch

Shares of Freeport-McMoRan Inc. fell 1.8% in premarket trading Thursday, after the mining company reported third-quarter net profit that soared more than four-fold, while revenue came up short of expectations, as realized copper prices soared but gold prices fell. Net income climbed to $1.40 billion, or 94 cents a share, from $329 million, or 22 cents a share, in the year-ago period. Excluding nonrecurring items, adjusted earnings per share came to 89 cents, above the FactSet consensus of 81 cents. Revenue grew 58.0% to $6.08 billion, just short of the FactSet consensus of $6.13 billion, as cost of sales increased 23.8% to $3.55 billion. The average realized price per pound of copper rose 39.5% to $4.20, the average realized price per ounce for gold fell 7.6% to $1.76 billion and the average realized price per pound for molybdenum jumped 101.6% to $18.61. The stock has rallied 12.4% over the past three months, while the S&P 500 has gained 4.1%.
STOCKS・2 DAYS AGO
24/7 Wall St.

The stock market continues to chug along, opening up opportunities to cash in. This duo of stocks provides more unique growth opportunities than most. There are few better roads to building wealth over your lifetime than investing in the stock market. The long-term average return for the S&P 500 has been about 11% per year, and that's through depressions and recessions, war and civil unrest.
STOCKS・3 DAYS AGO