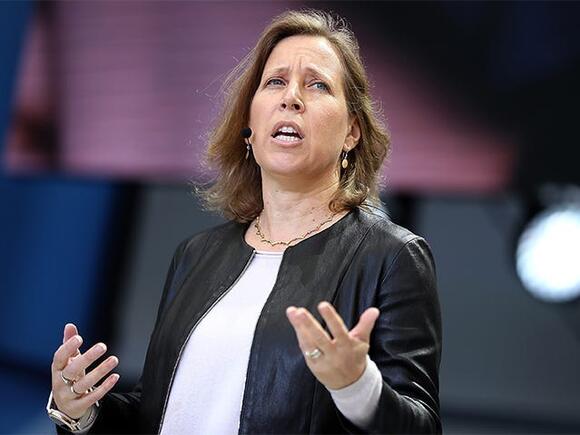 Last week, Russian news service Interfax reported that Vladimir Putin's regime had ordered YouTube's parent company, Google, and Apple to remove access to a voting app run by jailed opposition activist Alexey Navalny. The app disappeared from both app stores , sparking criticism among both the public and Google's own employees .

In an interview with Bloomberg , YouTube CEO Susan Wojcicki said free speech remained a "core value" at the company, but added that there were "multiple considerations" to take into account when dealing with a country like Russia.

The company has removed videos featuring Navalny in the past, citing Russian censorship laws, and reportedly took down another of his group's campaign ads ahead of the country's parliamentary election.

Wojcicki did not give a direct answer when asked if the latest video had been removed at the Russian government's request.

"One of the things that is important to us at YouTube is the fact that we do enable so many voices, and that we do enable people to express themselves, and really celebrate the freedom of speech," she said. "That's a core value of ours."

"But when we work with governments, there are many things that we have to take in consideration, whether it's local laws or what's happening on the ground," she added. "So there's always going to be multiple considerations."

When pressed on who ordered the takedowns, Wojcicki said: "We certainly get requests from governments, and we look and consider why are we getting the request? What's actually happening on the ground? And based on a whole bunch of different factors, we make a decision."

Navalny is currently in a Russian prison after returning to the country from Germany, where he recovered from being poisoned with the nerve agent Novichok during an internal Russian flight last August. The Russian government claims he is guilty of embezzlement.

On Friday, Navalny tweeted that he was surprised "how obediently the almighty Big Tech" had acted as Putin's "accomplices" in censoring him.

"The giants Apple and Google have complied with the Kremlin's demands and removed our app from their stores. My beloved YouTube has deleted our video, and the Telegram messenger has blocked our bot," he wrote.

"These programs, which Putin calls 'extremist', only contained information about opposition candidates in your constituency," he added.

Putin and the Russian government's treatment of Navalny continues to draw criticism from abroad. During a meeting with Putin last month, departing German Chancellor Angela Merkel called Navalny's imprisonment unacceptable and called for his release.

The team of US President Joe Biden has warned Russia of "consequences" if Navalny dies while in custody.

Are you a current or former Google or YouTube employee with more to share? You can contact this reporter securely using the encrypted messaging app Signal (+447801985586) or email (mcoulter@businessinsider.com). Reach out using a nonwork device.

Former President Donald Trump's new social media platform, TRUTH Social, has been given 30 days to comply with the software's terms of license before its access is terminated. If it fails to comply, the platform may face legal action or have to rebuild from scratch.
POTUS・20 HOURS AGO
Newsweek

Putin says Biden was right to withdraw US troops from Afghanistan

Putin also called on the US to unfreeze billions of dollars the Afghan central bank holds in reserves, which the Taliban wants access to.
MILITARY・1 DAY AGO

Putin, who vies to project a macho image, has been condemned worldwide over his anti-LGBTQ policies and rhetoric.
SOCIETY・21 HOURS AGO
USA TODAY

'You can't make this stuff up': Reaction to Trump's Truth Social is mixed

MOSCOW (Reuters) - Russia is moving towards excluding the Taliban from its list of extremist organisations, President Vladimir Putin said on Thursday, a day after high-level talks between Moscow and Afghanistan’s new rulers. Russia labelled the Taliban a “terrorist organisation” in 2003 but welcomed the Taliban for talks in Moscow...
POLITICS・1 DAY AGO
Birmingham Star

Washington [US], October 23 (ANI/Sputnik): A former Facebook employee has alleged in a legal affidavit that the company puts a higher priority on maximizing profits and growth over combating or banning so-called "hate speech," the Washington Post reported on Friday. The whistleblower made his or her allegations under condition of...
INTERNET・19 HOURS AGO

Trump's new venture follows speculation he would create his own social media site after he was banned or suspended from major platforms.
BUSINESS・1 DAY AGO
Indy100

Amid a string of accusations and controversies following the publication of a whistleblower’s report, Mark Zuckerberg is attempting to rebrand Facebook with a new name but some of his tech contemporaries aren’t buying it. Earlier this week, Zuckerberg announced that, as part of a new initiative, they would “effectively transition...
BUSINESS・2 DAYS AGO
ABC 7 Chicago

Nine months after being expelled from social media for his role in inciting the Jan. 6 Capitol insurrection, former Pres. Donald Trump said he's launching a new media company with its own social platform.
POTUS・1 DAY AGO

Experts told Insider Facebook's rebranding and focus on the metaverse is "genius" and could distance the company from toxicity on its social platform.
INTERNET・5 HOURS AGO
Newsweek

The founder of Mastodon said it appears Truth Social is "absolutely is based on" his open-source social networking platform.
POTUS・2 DAYS AGO
Business Insider

Awarding Alexei Navalny the prestigious human rights prize marks a symbolic rebuke of Vladimir Putin, who has been at odds with the EU for years.
ADVOCACY・2 DAYS AGO
AFP

The Kremlin conceded Friday its coronavirus vaccination drive was struggling and blamed Russians for not getting inoculated as deaths and cases hit new records. Russia has the highest official virus death toll in Europe and on Friday added 1,064 fatalities and 37,141 new infections. "We're in a worse situation than a whole series of European countries when it comes to vaccinations," Kremlin spokesman Dmitry Peskov told reporters. "With the sudden rise of more aggressive variants, more people are falling ill. That's the reality," he said.
PUBLIC HEALTH・1 DAY AGO
jack1065.com

MOSCOW (Reuters) – Russian President Vladimir Putin on Wednesday congratulated journalist Dmitry Muratov, whose Novaya Gazeta newspaper has at times been a thorn in the side of the Kremlin, on winning the Nobel Peace Prize, over a week after the prize was announced. Addressing Muratov at a question-and-answer session with...
POLITICS・2 DAYS AGO
MarketWatch

What should Facebook’s new name be? Twitter users have some ideas

The social network is reportedly rebranding its growing ‘metaverse,’ similar to what Google did with Alphabet
INTERNET・2 DAYS AGO
Reuters

LOS ANGELES, Oct 20 (Reuters) - Former U.S. President Donald Trump will launch his own social media app, TRUTH Social, that he said would "stand up to Big Tech" companies such as Twitter and Facebook that have barred him from their platforms. TRUTH Social will be created through a new...
POTUS・2 DAYS AGO
The Independent

Vladimir Putin will not be attending the Cop26 climate summit in Glasgow in November – a decision decried in self-absorbed Britain as representing a major snub to its PM Boris Johnson.There is certainly little love lost between the administrations of London and Moscow, with already terrible relations qualified only by the probability they will become even worse.But there is also nothing unusual about Mr Putin’s decision to turn down a foreign trip. The Kremlin has been fairly consistent in using Covid to call off travel. Since the beginning of the pandemic, he has been abroad just once – flying to...
EUROPE・3 DAYS AGO