By Jamie Braidwood
The Independent
27 days ago 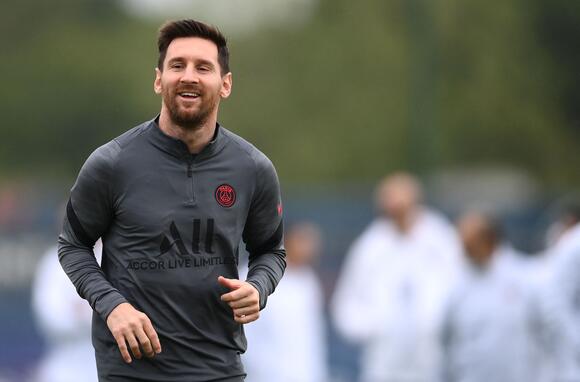 Lionel Messi has trained with his Paris Saint-Germain teammates ahead of their Champions League clash against Manchester City on Tuesday.

The Argentine was an injury doubt after picking up a knee problem in PSG ’s Ligue 1 win over Lyon last week.

The forward was substituted in the second half of the 2-1 win and then missed the French side’s matches against Metz and Montpellier.

But the 34-year-old was an active participant in the open section of PSG’s training session on Monday ahead of the meeting with former manager Pep Guardiola’s side.

Messi had also returned to PSG training ahead of Saturday’s win against Montpellier but was not risked by manager Mauricio Pochettino.

Messi joined PSG this summer as a free agent after leaving Barcelona. His arrival made the French side favourites to win the Champions League for the first time but their campaign got off to a slow start as they were held to a shock 1-1 draw by Club Brugge.

City defeated RB Leipzig 6-3 in their opening match and top Group A ahead of the meeting at the Parc des Princes on Tuesday night.

Ex-PSG Striker Wants Lionel Messi To 'Serve' His 'No. 1' Teammate

A Paris Saint-Germain legend is urging Lionel Messi to play a new role for his new teammates. Having started his professional career with PSG, Nicolas Anelka knew the Parisians’ culture very well. Now that Messi has become PSG’s newest star, Anelka wants him to forget about his Barcelona legacy and acknowledge Kylian Mbappe as the club’s “no. 1” player.
UEFA・14 DAYS AGO
invenglobal.com

International football stars from Paris Saint-Germain F.C, Lionel Messi and Neymar, sent a message of support to PSG Talon, the #1 PCS team at the 2021 LoL World Championship. A video was posted on PSG Talon’s official Youtube, where the two superstars publicly voiced their support for PSG’s esports team. While the video itself may only be 17 seconds long, to have such big names show support held a lot of meaning.
SOCCER・13 DAYS AGO
SkySports

Liverpool manager Jurgen Klopp says, on current form, Mohamed Salah is the best player in the world after the Egyptian shone in Saturday's 5-0 win over Watford. After scoring one of the most memorable goals of recent years in the draw with Manchester City two weeks ago, Salah was at it again at Vicarage Road, scoring a breathtaking effort and setting up two other goals in the 5-0 win over Watford.
PREMIER LEAGUE・8 DAYS AGO
firstsportz.com

Ligue 1: Where has Lionel Messi gone wrong at PSG?

Lionel Messi has remained off colour ever since his move to Paris St Germain. Lionel Messi moved to the French capital on a free transfer after Barcelona failed to register the player owing to the financial issues. However, the player has failed to be at his best in the ongoing campaign. So, what has happened? Where has Lionel Messi gone wrong at PSG?
SOCCER・13 DAYS AGO

Lionel Messi has spoken about who he believes can win the Champions League this season. The Argentine superstar mentioned a number of teams including his own team PSG but failed to mention Jurgen Klopp’s Liverpool. Messi's Contenders. In a recent interview in French magazine L'Equipe, Messi gave his views on...
PREMIER LEAGUE・14 DAYS AGO
104.1 WIKY

(Reuters) – Brazilian forward Neymar will miss Paris St Germain’s Champions League group game against RB Leipzig after picking up an injury on international duty, manager Mauricio Pochettino said on Monday. The 29-year-old was among a number of players not involved in PSG’s 2-1 Ligue 1 win over Angers on...
UEFA・6 DAYS AGO
CBS Sports

The UEFA Champions League group stage will reach its halfway point this week following Matchday 3 on both Tuesday and Wednesday. Eight games are on the slate for both days, with Tuesday highlighted by the clashes between Atletico Madrid and Liverpool, PSG vs. RB Leipzig, as well as Ajax vs. Borussia Dortmund. The action gets underway with two games at 12:45 p.m. ET, with the remaining six beginning at 3 p.m ET.
UEFA・5 DAYS AGO
Yardbarker

Before manager Thomas Tuchel guided Paris Saint-Germain to the UEFA Champions League final, the farthest that the capital club made it was the quarterfinals with former gaffer Laurent Blanc. In an interview with Panenka , the ex-PSG boss spoke about the current state of the French giants, and one of...
SOCCER・13 DAYS AGO

Watch: ‘The Only Team That Could Take Him Was PSG’ – Javier Pastore Discusses Lionel Messi Arriving at Paris SG

Former Paris Saint-Germain midfielder Javier Pastore was in attendance when the capital club presented Lionel Messi to its supporters at the Parc des Princes. Now the 32-year-old made an appearance on “Rothen s’enflamme” discussing the arrival of the Argentine forward. Pastore admitted that he was surprised over the departure of...
SOCCER・12 DAYS AGO
chatsports.com

Manchester City will be without Ferran Torres for at least the next four weeks after due to a foot injury sustained during the recent international break. Torres suffered the foot problem while on duty for Spain this month in their Nations League finals campaign. The 21-year-old scored twice in their...
SOCCER・10 DAYS AGO
Daily Mail

Paris Saint-Germain coach Mauricio Pochettino has revealed he thought club sporting director Leonardo was playing a joke on him when he was first told that Lionel Messi's signing was possible. Messi joined PSG as a free agent on Aug. 10, days after Barcelona announced they were unable to register the...
MLS・10 DAYS AGO

Lionel Messi scored twice in quick succession, including an exquisite Panenka-style penalty, to rescue Paris Saint-Germain as they rallied to beat RB Leipzig 3-2 at the Parc des Princes. Messi equalised in the 67th minute, poking home from close range after goalkeeper Peter Gulacsi tipped his first shot onto the...
UEFA・5 DAYS AGO
chatsports.com

'There are not a lot of memories': Kevin de Bruyne admits he cannot remember most of Manchester City's Champions League final defeat against Chelsea after a clash with Antonio Rudiger fractured his nose and eye socket

Kevin De Bruyne revealed he has no memory of Manchester City’s Champions League final defeat after Chelsea defender Antonio Rudiger fractured his nose and eye socket. De Bruyne left the pitch in tears following the collision and was rushed straight to hospital, still in his strip when waking up the next morning.
PREMIER LEAGUE・6 DAYS AGO
firstsportz.com

Parc des Princes witnessed a mind-boggling encounter between the home side, PSG and RB Leipzig. The match went down to the wire with both teams giving their all in to ensure a win for their side. However, the competition was intense. The match began on a high note with PSG...
UEFA・5 DAYS AGO
chatsports.com

From Melbourne injury misery to Messi and Man City: Scotland's Jack Hendry is shining for Club Bruges in the Champions League and helped keep PSG's daunting front line quiet... now next up it's Pep Guardiola's star-studded side

He kept Lionel Messi quiet on his Champions League debut, has pushed Scotland to within a whisker of the World Cup play-offs, and hopes to spring an upset against Manchester City. Yet just over a year ago, Bruges defender Jack Hendry could have been forgiven for thinking he would never...
SOCCER・6 DAYS AGO
goal.com

The Egyptian forward has been in good form for the Reds and played a crucial role to help his team register a huge win over Watford on Saturday. Martin Keown believes Liverpool attacker Mohamed Salah is on the same level as PSG superstar Lionel Messi. The Egyptian was on song...
PREMIER LEAGUE・8 DAYS AGO
The Independent

Ronaldinho smiled and raised his fists towards the night sky. Mauricio Pochettino lent back in the technical area, clearly overwhelmed and definitely relieved.Lionel Messi put the ball on the spot and delicately painted it with a Panenka. The coolness, calmness and panache of it hid the fact that this was no showcase by Paris-Saint Germain.RB Leipzig were beaten, but only just. RB Leipzig were beaten, but only because Messi had reshaped the match in seven minutes, wondrously assisted by Kylian Mbappe.Mohamed Simakan had pushed the French international leading to the penalty. Mbappe could have taken the kick, but gestured for...
UEFA・5 DAYS AGO
CBS Sports

The first eight games of Champions League Matchday 3 are over after a goal-filled day of European soccer. The eight matches in total brought 35 goals, as seven of the eight matches featured at least four goals. On the night, Liverpool got their first ever win over Atletico Madrid, 3-2, while PSG came from behind thanks to Lionel Messi to beat RB Leipzig, 3-2.
UEFA・5 DAYS AGO
goal.com

The Englishman’s effort against the Blue Black saw him become the third youngest Citizens player to find the net in the European competition. At the age of 19 years and 166 days, Cole Palmer is the third teenager after Kelechi Iheanacho and Phil Foden to score a goal for Manchester City in a Uefa Champions League encounter.
PREMIER LEAGUE・6 DAYS AGO