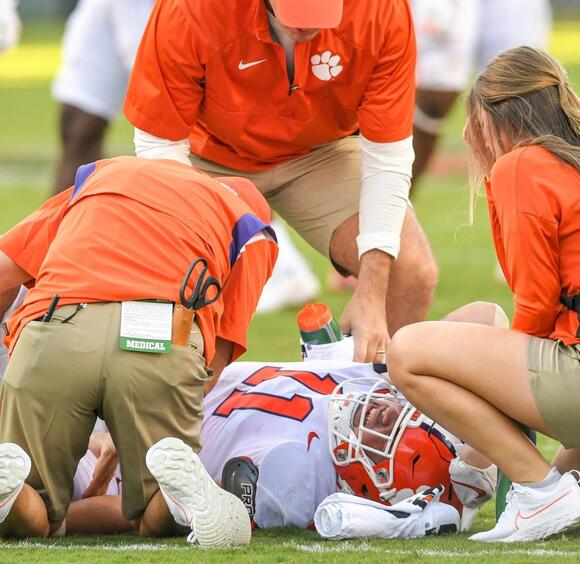 Clemson defensive tackle Bryan Bresee will miss the rest of the season with a torn ACL, Tigers coach Dabo Swinney said in a conference call with reporters on Sunday.

Also, top running back Will Shipley will miss approximately three to four weeks after suffering a leg injury.

Bresee was the ACC Defensive Rookie of the Year last season and was blossoming as a star for the Tigers. 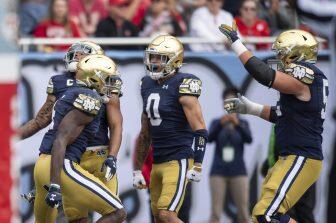 “It’s unfortunate, but injuries are a part of the game,” Swinney said of Bresee. “This will be part of his journey. I just appreciate him and his effort. What an unbelievable player he is. Just an incredible leader. I don’t have any doubt that when we get him out there and see him again, he’ll be better than ever.”

Shipley sustained an injury to his shin/tibia in the fourth quarter against NC State. He rushed for 38 yards and a touchdown on 11 carries.

Shipley leads the Tigers with 213 rushing yards and five touchdowns. 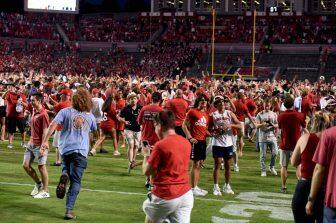 Saturday’s loss marked just the second time Clemson has lost to NC State in the past 17 meetings.

LSU football head coach Ed Orgeron’s next coaching job is more obvious than you would think. With Ed Orgeron parting ways with the LSU football program at the end of the season, everybody and their brother is curious as to where he could end up. Orgeron is not even two...
MIAMI, FL・3 DAYS AGO
saturdaydownsouth.com

Caylin Newton made a huge play for Auburn in the third quarter of the Tigers’ game against Georgia State. Newton, who is Cam Newton’s brother, broke through on the right side and blocked a Panthers’ punt, which led to an Auburn recovery and touchdown in the end zone. It cut the deficit to 24-19, as Barton Lester made the recovery with 4:44 remaining in the third quarter.
GEORGIA STATE・25 DAYS AGO
The Spun

Things aren’t looking very good for Ed Orgeron and the LSU Tigers this season. LSU, which won the national championship in 2019, had a disappointing 2020 season. The Tigers failed to follow up their national title season with another contending season in ’20. Unfortunately for the Baton Rouge program, the same is true in 2021.
COLLEGE SPORTS・11 DAYS AGO
ClutchPoints

After struggling mightily to get the offense going against Texas in Week 6, Oklahoma Sooners head coach Lincoln Riley benched starting quarterback Spencer Rattler in favor of Caleb Williams. Williams was brilliant and Rattler has sputtered at times throughout the year. Williams’ performance for the Sooners against the Longhorns has...
OKLAHOMA STATE・8 DAYS AGO

Jacksonville Jaguars kicker Matthew Wright was so impressive on Sunday in the team’s win over the Miami Dolphins that he was selected for a random drug test just a few days later. Wright, who made all three of his field goal attempts in Week 6, posted a message he received...
NFL・1 DAY AGO
93.7 The Fan

Mike Tomlin to USC? Or LSU?

Former Bills GM and Steelers executive Doug Whaley joins The Fan Morning Show every Wednesday from 9-10 am in-studio. Doug began the conversation with an idea involving Mike Tomlin’s future that took everybody on the show off guard. “Six letters for Steelers fans to be very concerned about…LSU, USC. Think...
NFL・1 DAY AGO
The Clemson Insider

Ohio State head coach Ryan Day delivered some tough news as the Buckeyes head into their Week 4 matchup against Akron during his weekly radio show Thursday. In all likelihood, there will be a new (...)
OHIO STATE・28 DAYS AGO
The Spun

The Manning family is known for producing great quarterbacks and the next one will be entering the college football world in no time. Arch Manning, the nephew of Peyton and Eli, is the No. 1 overall recruit in the 2023 class, per 247Sports’ Composite Rankings. He’s not only the top quarterback prospect in his class, but one of the top prospects in recent years.
FOOTBALL・1 DAY AGO

Arch Manning is going to be in the national spotlight for years to come and it goes beyond his famous last name as he’s proven to be one of the top high school quarterbacks in the nation. Beyond reading defenses, Manning’s biggest selection is going to be where he decides...
FOOTBALL・25 DAYS AGO
The Spun

Cam Newton recently opened up about his desire to continue playing football. His comments have led to a ton of speculation about where he may end up in the future. Even though Newton doesn’t have an offer on the table right now, he has been linked to several teams, such as the Pittsburgh Steelers and Seattle Seahawks.
NFL・2 DAYS AGO
Sportsnaut

Ed Orgeron is out after the 2021 season, creating the best opening in college football and opening the door to
COLLEGE SPORTS・2 DAYS AGO
The Spun

Washington Football Team fans have taken to social media on Sunday night to express their frustration with Patrick Mahomes’ brother, Jackson. Social media posts appear to show Jackson Mahomes dancing on the No. 21 logo – painted at FedEx Field in honor of legendary safety Sean Taylor – at some point on Sunday.
NFL・3 DAYS AGO

There has been drama surrounding Zion Williamson basically from the very beginning of his career with the New Orleans Pelicans. That’s only continuing as the 2021-22 season gets underway, with Williamson undergoing foot surgery over the summer and now missing the start of his third campaign. The communication on the...
NBA・1 DAY AGO
The Spun

Over the weekend, the LSU Tigers reached a separation agreement with head coach Ed Orgeron. Once the 2021 season ends, he’ll be removed from his position. While there are several factors as to why LSU has decided to move on from Orgeron, the latest report from ESPN’s Alex Scarborough and Mark Schlabach is quite telling.
COLLEGE SPORTS・2 DAYS AGO
99.9 KTDY

Report: Orgeron's 'Girlfriends' Would Show Up at Practice and 'Interfere', Even Participate in Drills Along With Their Kids

WBRZ sports anchor Matt Trent reported yesterday that Orgeron had "girlfriends" that would show up to practice. Sometimes, the kids of those girlfriends would interfere with practice and actually take part in team drills.
FOOTBALL・3 DAYS AGO
Awful Announcing

There’s been a lot of mockery of Chris Broussard over the years, from his repeated “Sources” missteps to “the biggest f***ing fraud in the history of sports media” and “what does it say about you that the only news you made during the entire NBA free agent process was getting called out on your bullshit by a foreign sports anchor?” The latest came Tuesday on FS1’s First Things First (where Broussard has been a co-host since August, alongside Nick Wright, Kevin Wildes, and Jenna Wolfe) when Broussard cited an injury to Taylor Lewan for why the Buffalo Bills failed on a fourth-and-one running play Monday night; Lewan plays for the Tennessee Titans, the Bills’ opponent in that game. And this led to hilarious mockery from ESPN NFL analyst Ryan Clark on ESPN’s NFL Live Tuesday afternoon:
NFL・1 DAY AGO

Two weeks ago, the New Orleans Saints brought in a handful of running backs for a workout. On Tuesday, the team officially added some depth to that position group. According to ESPN insider Adam Schefter, the Saints are signing former Pro Bowl running back Lamar Miller to their practice squad.
NFL・2 DAYS AGO
On3.com

The Dallas Cowboys made a roster move on Wednesday to prepare space for the return of a key star player, following his reactivation by the NFL. Fullback Nick Ralston was released and signed to the Cowboys’ practice squad as tackle La’el Collins is set to return from his five-game suspension for violating the NFL’s drug testing policies.
NFL・22 HOURS AGO
The Spun

Backup quarterback was a major talking point entering the season for the Indianapolis Colts, as Carson Wentz was not 100-percent to start the season, so there was some thought that Jacob Eason might be in the lineup. Eason and rookie Sam Ehlinger were the primary backup options for the Colts...
NFL・2 DAYS AGO
On3.com