By Jordan Moreau
Variety
26 days ago 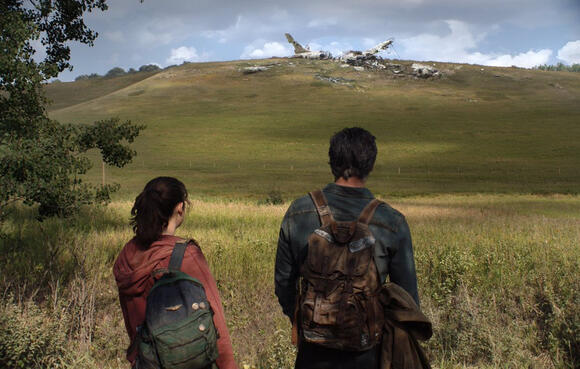 The first look at HBO’s “ The Last of Us ” TV series, starring Pedro Pascal , has been revealed.

Based on the popular PlayStation video game of the same name, the HBO series takes place 20 years after modern civilization has been destroyed by a deadly fungus. Joel, a hardened survivor, is hired to smuggle Ellie, played by “Game of Thrones” actor Bella Ramsey, out of an oppressive quarantine zone. What starts as a small job soon becomes a brutal, heartbreaking journey, as they both must traverse across the U.S. and depend on each other for survival.

Naughty Dog, the video game developer and a producer on the TV series, released the very first image from the show on Sunday evening. Pascal and Ramsey, shown from the back, are near perfect matches to Joel and Ellie from the video game, down to their rugged clothes and worn-out backpacks. The two are gazing out at a grassy hill, where destroyed plane remains litter the countryside.

The cast includes Gabriel Luna as Joel’s brother Tommy, Nico Parker as Joel’s daughter Sarah, and Merle Dandridge reprises her video game role of Marlene, the leader of the Fireflies resistance group struggling for power against the government’s military regime.

“Chernobyl” creator Craig Mazin will write and executive produce “The Last of Us,” along with Neil Druckmann, a writer and creative director for the video game. Carolyn Strauss, Rose Lam, Naughty Dog president Evan Wells and PlayStation Productions’ Asad Qizilbash and Carter Swan will also executive produce. Kantemir Balagov will direct the pilot, with Jasmila Žbanić and Ali Abbasi also attached to direct. The project is a co-production with Sony Pictures Television. PlayStation Productions, Word Games, and Naughty Dog.

“The Last of Us” is currently in production, with no release date announced yet.

Welcome to this week’s “Just for Variety.” Wonder Woman approves of Robert Pattinson as the new Batman and Zoë Kravitz as Catwoman! “Rob looks amazing,” Gal Gadot told me last night at Elle’s Women in Hollywood event at the Academy Museum when I asked if she had seen the new “The Batman” trailer. “I love his voice and I love the whole tone of everything. “And I love Zoë. She looks incredible. She’s a sweetheart. She’s a talented woman,” she continued. “And I’m so happy to have another female as a comrade.” So when does Gadot think we’ll see an all-female superhero movie with...
CELEBRITIES・2 DAYS AGO
Variety

Emily Blunt is in talks to star in Universal’s “Oppenheimer,” an upcoming World War II movie from director Christopher Nolan. Though nothing is official, the casting would reunite Blunt with her “A Quiet Place Part II” co-star Cillian Murphy, who will portray the title role of J. Robert Oppenheimer in the film about the development of the atomic bomb. Blunt is expected to play the wife of Oppenheimer, the American physicist who was pivotal in the Manhattan Project. Universal Pictures and reps for Blunt didn’t respond to request for comment. Murphy and Nolan have worked together on several films, including “Batman Begins,” “Inception” and...
MOVIES・2 DAYS AGO
Variety

Variety's Awards Circuit is home to the official predictions for the upcoming Oscars and Emmys ceremonies from film awards editor Clayton Davis. Following history, buzz, news, reviews and sources, the Oscar and Emmy predictions are updated regularly with the current year's list of contenders in all categories. Variety's Awards Circuit Prediction schedule consists of four phases, running all year long: Draft, Pre-Season, Regular Season and Post Season. The eligibility calendar and dates of awards will determine how long each phase lasts and is subject to change. To see all the latest predictions, of all the categories, in one place, visit THE...
CELEBRITIES・2 DAYS AGO
epicstream.com

John Boyega reportedly left everyone hanging during the production of his supposed Netflix film. Star Wars actor John Boyega is already no stranger to controversy and over the past year alone, the British-Nigerian actor was the subject of several news headlines following his much-talked-about battle with Disney and Lucasfilm over their treatment of BIPOC actors like him. That issue has already been resolved when he and Lucasfilm President Kathleen Kennedy had a serious discussion about his grievances.
MOVIES・20 HOURS AGO

Starz’s John Wick prequel series The Continental has found its Winston Scott: Colin Woodell (The Flight Attendant, The Originals) will star as the younger version of Ian McShane’s movie character, our sister site Deadline reports. Produced by Lionsgate Television, the three-night event takes John Wick fans back to 1975 New York City, where a young criminal named Winston Scott (Woodell) navigates the city’s nefarious underbelly in an attempt to take control of The Continental, a notorious hangout for all manner of ne’er-do-wells. As previously reported, Mel Gibson will play a character named Cormac. Also joining the ensemble, per Variety, are Mishel Prada...
TV SERIES・2 DAYS AGO
Polygon

The latest sneak peek from this year’s DC FanDome takes us to a different side of Gotham City for our first look at HBO Max’s forthcoming Batgirl film. In the Heights star Leslie Grace will take on the role of Barbara Gordon, the daughter of police Commissioner Gordon and tech wiz who, inspired by Batman’s vigilante justice, dons a cape and cowl of her own to fight crime as Batgirl.
MOVIES・6 DAYS AGO
insideedition.com

Brittany Murphy was an actress with big potential before she tragically died at age 32. Now a new HBO Max documentary looks into the star's troubled final years. When she died, Murphy was married to screenwriter Simon Monjack. In “What Happened, Brittany Murphy,” it's alleged that Monjack was a con artist and contributed to his wife’s demise.
CELEBRITIES・9 DAYS AGO
film-book.com

HBO Max has renewed its superhero TV series Titans for a Fourth Season. The Titans: Season 4 renewal was announced at the DC FanDome 2021. The official press release for Titans‘ Season 4 renewal is below. Titans Renewed for Season 4 by HBO Max Press Release. HBO Max Renews TITANS...
TV SERIES・5 DAYS AGO

Pedro Pascal Say That He’s Not Currently Filming On Mandalorian

The Mandalorian has proven to be one of Disney Plus’ top programs. Considered by many as a more faithful continuation of the Star Wars series compared to the Disney trilogy of films from 2015 – 2019. The show has grown a strong and dedicated audience and has gone on to sell plenty of merchandise. With The Mandalorian Season 3 gearing up for filming, its lead star, Pedro Pascal, who plays the titular character, is not on set.
TV & VIDEOS・12 DAYS AGO
tvinsider.com

Fan-favorite spy series Alex Rider is returning to IMDb TV on December 3, and in anticipation, the Amazon free streaming service has unveiled the first sneak peek for the second season. The trailer (watch below) features plenty of fighting, shoot-outs, and tense confrontations as London-based teenager Alex continues his unwitting...
TV SERIES・11 DAYS AGO
ComicBook

Michael Gandolfini and Zack Schor have joined the cast of “The Offer” at Paramount Plus, which tells the story of the making of “The Godfather.” “The Offer” is a 10-episode series based on the experience of Oscar-winning producer Albert S. Ruddy (Miles Teller), detailing the behind-the-scenes events of the original 1972 film. Along with Teller, the series will star Matthew Goode as producer Robert Evans, Giovanni Ribisi as Joe Colombo, Colin Hanks as Barry Lapidus, and Dan Fogler as Francis Ford Coppola. Juno Temple also joined the cast as Bettye McCartt, Ruddy’s assistant. Gandolfini will play Andy Calhoun, an unexpectedly savvy businessman on...
MOVIES・1 DAY AGO

The Mandalorian is coming up on a year since the Season 2 finale that changed everything, and 2021 will end without debuting the new season. Fortunately, one Mandalorian fan-favorite just confirmed that he’s returning for Season 3. Carl Weathers will be back for the third season, and the actor has a message for fans about it. But what about Pedro Pascal?
TV SERIES・10 DAYS AGO
Variety

“Champaign ILL” featured rising stars Sam Richardson (“Veep”) and Adam Pally (“Happy Endings”) and garnered plenty of critical acclaim when it debuted. The series came from the minds behind popular comedies “Happy Endings” and “Black Monday.” Yet you probably never heard of it. Originally produced for YouTube Premium, the entire 10-episode season was released in 2018. But the series, about a hip-hop star’s entourage that’s forced to readjust to life without perks when the star unexpectedly dies, didn’t manage to find audiences, particularly as YouTube started exiting the scripted business. Now, “Champaign ILL” is getting a second lease on life — via...
TV SERIES・1 DAY AGO
ComicBook

A new batch of fan-taken set photos from The Last of Us have provided a new look at both Bella Ramsey as Ellie and Pedro Pascal as Joel. While we've seen plenty of set photos showing Pedro Pascal as Joel, set photos of Bella Ramsey as Ellie have been far harder to come by. However, this week that changed. Unfortunately, the fan-taken photos are far from the clearest, so fans still don't have a single great look at the character, but they have more than they had before this new batch of photos.
TV SERIES・7 DAYS AGO
Deadline

EXCLUSIVE: Season one of Animal, a nature series from Plimsoll Productions (Night On Earth), will land on Netflix November 10. The show follows eight families of the natural world, including a mother lioness, a wild dog family, a kangaroo joey and a young giant pacific octopus. Each episode has a high-profile narrator who will bring to life the subjects, said the streamer, they are: Bryan Cranston, Rashida Jones, Rebel Wilson and Pedro Pascal. The project was almost entirely shot during the pandemic, meaning the team used local camera operators to film in countries that were inaccessible due to travel restrictions. Series two of the show has already been greenlit by Netflix and will feature narrators including Andy Serkis, Anthony Mackie, David Harbour and Uzo Aduba and will focus on dolphins, bears, birds of prey and apes. That season will premiere in 2022. The series is produced by Plimsoll’s Anuschka Schofield, Adrian Seymour, Alex Minton and Rob Morgan. Bill Markham is Series Producer, Martha Holmes and Tom Hugh-Jones serve as Executive Producers. Frances Casey serves as Line Producer and Production Managers are Stella Stylianos and Rachel Norman.
TV SERIES・10 DAYS AGO
GAMINGbible

Pedro Pascal has been spotted on the set of the upcoming The Last of Us show dressed in Joel's unmistakeable jacket, suggesting that the brutal events of the university scenes in the game will be recreated. The adaptation, which was revealed in the spring of last year, will star Pedro...
TV SERIES・9 DAYS AGO
Den of Geek

The Last of Us HBO Series Set Footage Reveals Best Look at Ellie, Joel, and Tess in Boston QZ

When Joel meets Ellie in the opening act of The Last of Us, it’s a turning point for the character. After years of blaming himself for the death of his daughter during an outbreak that turned most of world’s population into flesh-eating monsters, Joel has a chance at redemption when he’s hired to smuggle Ellie out of the Boston Quarantine Zone and all the way to Salt Lake City, Utah, where a rebel group believes it has found the cure to the virus that has engulfed the planet. It’s one of the most beloved tales in gaming, which is why it was only a matter of time before someone tried to turn it into a TV series.
TV SERIES・7 DAYS AGO